Two Kinds of Camping in Laid Back Camp

Today let's explore the very different appeals of Rin and Nadeshiko's adventures in Laid Back Camp! 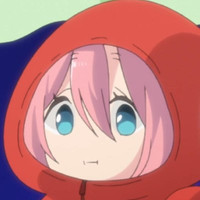 Hey everyone, and welcome back to Why It Works! The winter season is continuing to prove itself to be the Season of Comfy, and among its many slice of life offerings, Laid Back Camp is still my pick for comfiest of them all. I’ve already covered how the show successfully works to turn a theoretically abrasive concept into an approachable, intimate story, but as the show has continued, I’ve come to appreciate how well it dances between what almost feel like two different subgenres. Laid-Back Camp’s overall mission statement is clearly “present endearing camping trips that the audience can sink into,” but by keeping its two heroines Nadeshiko and Rin separate, it’s managed to pursue that goal through complementary but extremely different means. So today on Why It Works, let’s explore how Laid-Back Camp doesn’t just find a slice of life appeal in camping, but actually finds that appeal twice, in entirely different directions. 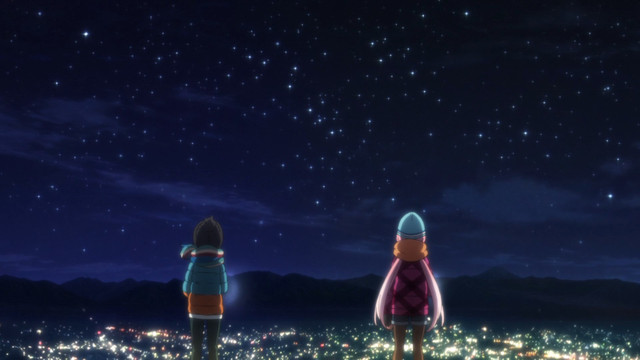 The appeal of Rin’s side of the narrative dominates the show’s first episode, before we’re actually introduced to Nadeshiko. Rin goes camping alone in the winter, when campsites are largely deserted, and spends her time reading and sending idle messages to friends. The beauty of nature itself is paramount, as is the sense of peaceful isolation that comes from a solo trip. Rin’s trips tend to range further and demand more than Nadeshiko’s, and the rewards she receives from them are quiet, subtle things. The appeal of following Rin’s journeys is essentially the appeal of solo camping itself, an escape into the wilderness where the quiet and natural beauty will let you recharge in peace.

In contrast, Nadeshiko’s adventures hew much closer to classic clubroom-based slice of lifes. Nadeshiko’s trips are group outings full of laughter and mistakes, where the camping itself often seems like an afterthought among other club activities. There’s more overt comedy, often a great deal of bellyaching, and a messier mix of tones throughout. The warm fuzziness of Nadeshiko’s journeys is a very different thing from the bracing beauty of Rin’s, and the intended appeal is clearly different as well. Nadeshiko’s adventures offer slice of life’s traditional promise: some time spent with charming friends in a cozy environment, a midday nap lightened by silly faces and laughter. 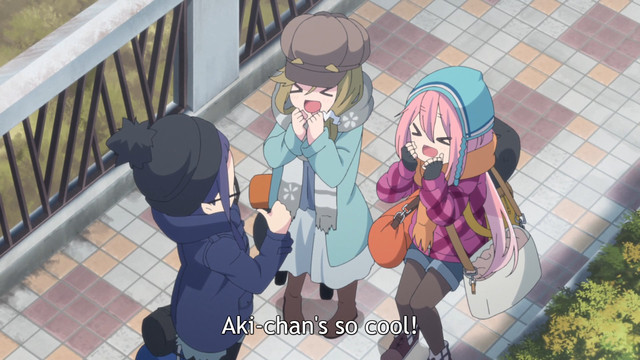 Every element of Laid-Back Camp’s production and storytelling work to facilitate the distinct goals of its two slice of life modes. In terms of layouts and shot framing, Rin’s segments generally prioritize the scale of the outdoors and the beauty of nature. Every adventure opens with a scooter-back segment that simultaneously emphasizes both the grand space Rin inhabits and the distance she must be from the worries of home, before her actual camping segment focuses on the allure of her various campsites. In contrast, Nadeshiko’s segments are full of close-up shots and cozy interiors, emphasizing the security and intimacy of her group. The show’s sound design presents a similar contrast; while Nadeshiko’s segments are livened by a busy back-and-forth of consistent verbal chatter, Rin’s let the show’s charming soundtrack do the work, further reducing any sense of outside interference in her private world.

The divergent goals of Laid Back Camp’s two modes are also exemplified through the ways each track establishes and carries out conflict. On Rin’s side, Rin is essentially our perspective character - she’s a charming person, but the actual star of these segments is the allure of nature itself. In light of that, her conflicts tend to be external ones focused on combating the whims of nature, which helps the audience fall into a similar mental routine of familiar, mechanical struggles. In contrast, Nadeshiko and her friends are themselves the appeal of their camping segments, and thus they themselves are also the source of their conflict. While Rin struggles with issues like cooking a meal or finding a hot spring, Nadeshiko is beset by problems like “we ate too much and slept too much and now we’re late.” The dramatic appeal is Nadeshiko’s group of friends, not nature itself, and so the conflicts orient themselves appropriately. 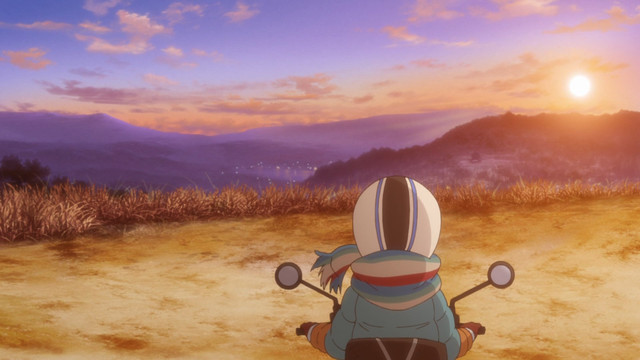 The unique goals of Rin and Nadeshiko’s focus segments are even illustrated through the two segments’ divergent styles of comedy. Nadeshiko’s segments are goofy and relatively traditional in their slice of life tone, and so the show combines funny comic back-and-forth with over-the-top silly faces, along with absurd skits like Nadeshiko representing various camping tools for practice. Rin’s quiet material would feel tonally disjointed if they dabbled in that same sort of energetic comedy, but the show doesn’t just give up on making her segments funny; instead, she receives gags more focused on concepts like anticlimax or wordless visual comedy, which are just funny, but less disruptive to her own segment’s atmosphere.

On the whole, I’m enjoying both of Laid-Back Camp’s unique moods, and hope the show continues to celebrate both of them even as Rin moves closer to her new friends. But either way, Laid-Back Camp has been a confident and satisfying production so far, and I have every reason to believe it’ll keep making smart choices. I hope you’re all enjoying Laid-Back Camp as well, and let me know in the comments which version of the show’s adventures is your own favorite!

Tags
why it works, laid back camp
« Previous Post
"Persona 3" and "Persona 5" Rhythm Games Get Two Character Trailers
Next Post »
"Magi: Adventure of Sinbad" Manga Prepares to Enter Its Epilogue
Other Top News
4 Comments
Sort by:

FEATURE: Five Reasons You Need To Catch Up On Ranking of Kings!