OPINION: Stronger Apart: A Final Separation May Be the Best Ending for The Ancient Magus' Bride 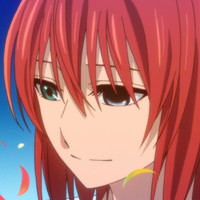 While it’s had its dramatic moments, The Ancient Magus’ Bride is most easily considered as one of the slower and more contemplative series of the last two seasons, spending its time on the mundane rituals of everyday just as often on those of the magical variety. So the recent events have been quite a curveball, tearing asunder the central relationship that had been building over the course of the previous 20 episodes. In retrospect, it’s difficult not to see the groundwork that had been laid to drive us to that dramatic moment. Where things might go from here between Chise and Elias is anyone’s guess, but I’d like to argue that the themes of the series have been singularly pushing toward a crucial decision for Chise. To leave Elias so that they both can continue to grow. 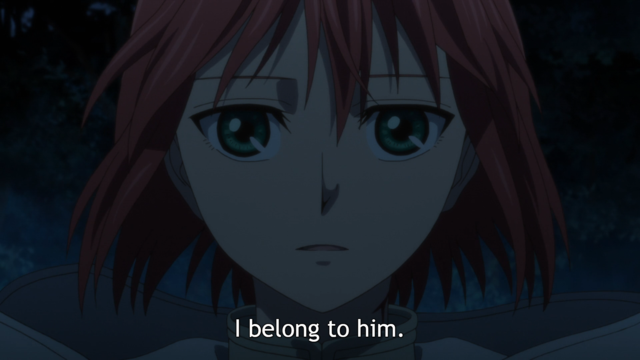 Although Chise and Elias’s relationship is one of the central components of the story, and definitely one of the aspects of the anime that has attracted a number of fans, the primary narrative hasn't been one of romance as much as healing for Chise, overcoming her immense personal tragedies to find ultimately find a place and a purpose that will allow her to be happy. While her relationship Elias acted as a starting point for these positive changes that have ultimately lead to her deciding she wants to live and discovering her own agency, both can only be achieved as the result of a conscious decision rather than a preconstructed path. No matter how carefully Elias designs a course of development for Chise, it’s entirely up to her to decide what gives her a sense of meaning. 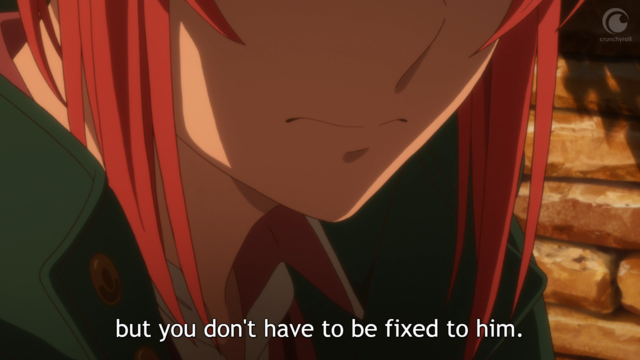 That decision has been made time and again when Chise discovers a new opportunity to help others. After so many years of being pushed out of other people's lives as a burden and source of fear, being able to touch the life of another and create a positive change is revelatory for Chise. Her warped perception is evident in her interpretation of taking action that ultimately hurts her to aid another as selfish for the way that it inconveniences Elias. Although she has certainly overcorrected and is too willing to take the cost of whatever aid she may offer from her own flesh, the concerns of not only Elias, but all of the friends she has collected as a result of her altruism, for her to consider how her self-harm might hurt them as individuals who care about her. 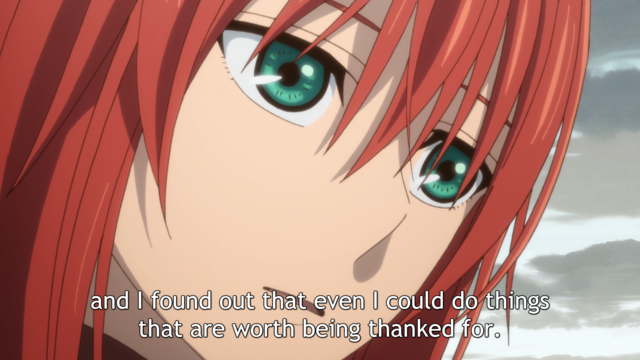 Chise’s compulsion to aid itself was an unexpected and unwelcome turn for Elias. A creature more familiar with bargaining for favors, Chise’s selfless giving is something that he has trouble comprehending and the manner in which it endangers her is unacceptable. Time and again she has had to persuade him to offer aid. It’s expected that he doesn’t want to see harm to come to her, but it also becomes evident he prefer they remain apart from such business entirely. While he logically understands the process that brings about the behavior, he seems to have no awareness or consideration of the positive effect that what she has managed to accomplish already has had upon her. 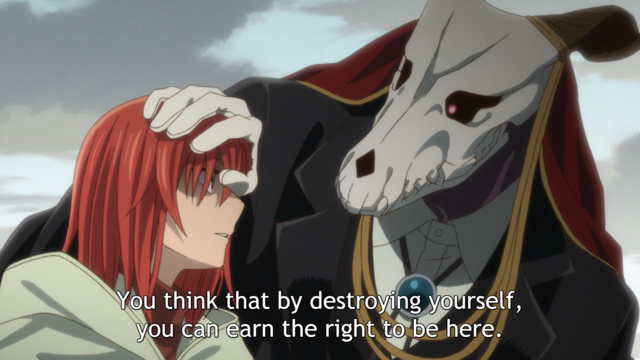 This conflict between the two has shown Chise’s growth appear not only in her emotional well-being but also in the dynamics of their relationship. Landmark changes for Chise are always accompanied by a shift in the paradigm between her and Elias and she grows confident enough to make demands of her own from him rather than accepting every wish he has for her. She’s requested that he speak of himself so she can learn more about him, drawn Elias away from his secluded lifestyle to interact with the magical community, and ultimately reframes their relationship not of master and slave or owner and puppy, but as two teachers exchanging wisdom and enjoying one another's company. Whenever Chise takes a step forward, it results in her gaining a greater sense of control over their relationship. 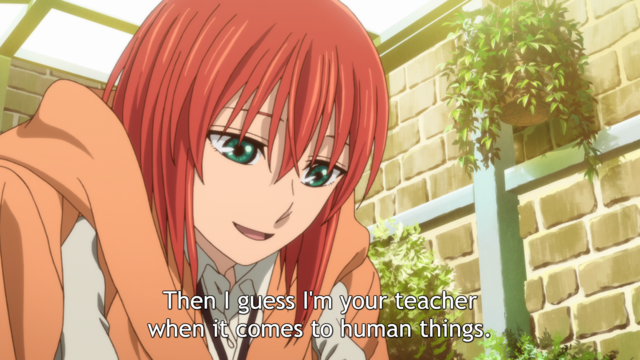 Or so Chise believes, while it appears she and Elias are growing closer to mutual understanding, we’re given clues that he may not be acting faithfully toward her. If Chise and Elias are indeed supposed to be a romantic couple, it’s difficult to ignore the intentional coding of Elias as an abusive and controlling partner. He recognizes that he values her but continues to think of her as an object he owns, which he jealously guards from others, destroying offers of admission from The College, spying on her with magic, and discouraging Renfred from involving himself in their relationship by plainly stating that Chise belongs to him. Elias broke Chise’s chains and assured her she had a choice in their future together while taking every available action to hold her to him and erase other avenues. 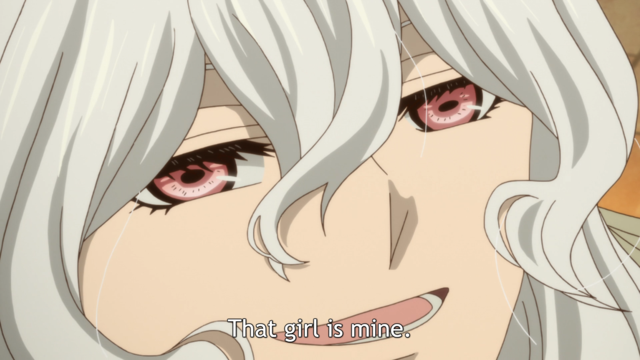 Whether due to misunderstanding because of his alien psychology or a disregard for Chise’s wishes in favor of his own. Elias knowingly takes action against what he knows Chise wants, isolating her from her newfound friends that he knows she values. This comes to a head with Stella, Chise’s first plainly stated friendship. He knows Chise values her and experiences jealousy at the prospect of having to share her or, perhaps, that they may share something together that he and Chise to not. When faced with the prospect of Chise’s death, he knows she wants them to work together to find a solution, he knows she would balk at the prospect of sacrificing another for her own survival, and he knows that, above all, harming Stella would wound Chise as well.

The Ancient Magus’ Bride is a story about Chise’s growth and, toward that end, Elias has grown into one of her greatest barriers. Starting blocks serve as a great launching point in a race but can only trip you up when you’re approaching your second lap. In addition to his direct actions against her wishes, Chise also needs to break free of framing her own development in the context of their relationship and to rid herself of her own dependency upon him. To know she can survive on her own two feet she has to try walking without the crutch that has been propping her up and experience her ability to live, laugh, and continue to help others under her own power and without asking anyone's permission. The conclusion of her arc with her mother perfectly matches this sentiment. Though she cannot forgive her, she won't forget her, and she'll move on without her. 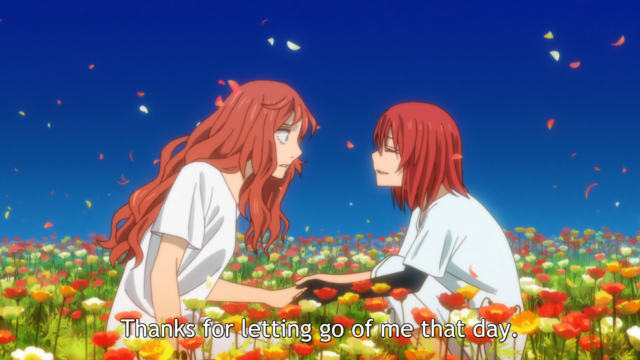 Ironically, this may also be the greatest lesson Chise may have to offer Elias. Whether he planned to smooth things over after the ritual out of a fundamental misunderstanding of human emotion or a more nefarious plan to remove her memory of Stella entirely, Elias was prepared to commit the same unforgivable act that had turned a human being into a monster. In either case he displayed a lack of reverence for human emotion that represents an impenetrable barrier to achieving his goal of humanity. Experiencing the consequence of his betrayal and knowing first-hand that feelings can drive a permanent wedge between two people that no amount of transaction or bartering can overcome may allow him to finally recognize the gravity of what he has done and decide he needs to change. 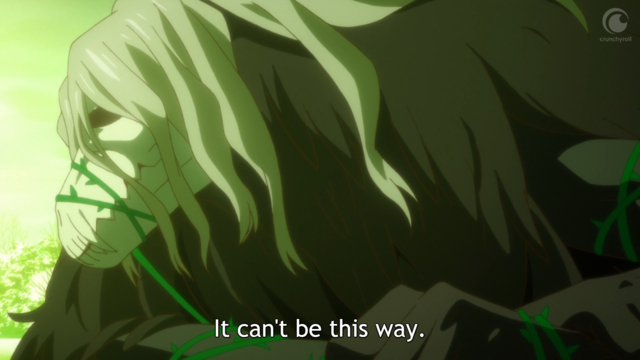 Taking that lesson to heart, next time Elias encounters someone who is suffering, he may be less willing to demand compensation in exchange for his aid. Next time he has the opportunity to grow close to someone and become part of their life, he may be less willing to betray their trust, even if he perceives his own actions as the proper course. Next time he may be able to appreciate the gift he is given when someone can approach him without fear. Because of her tragic circumstances, Chise has given Elias an unrealistic amount of leeway in their relationship, allowing him to take what he wishes of her without giving back. Realizing that only pursuing your own interests is a poison between two people is the most important thing Chise can teach him and forgiving him may only be a lesson all it’s own. That no act of evil or dishonesty is too great that cannot be assuaged. 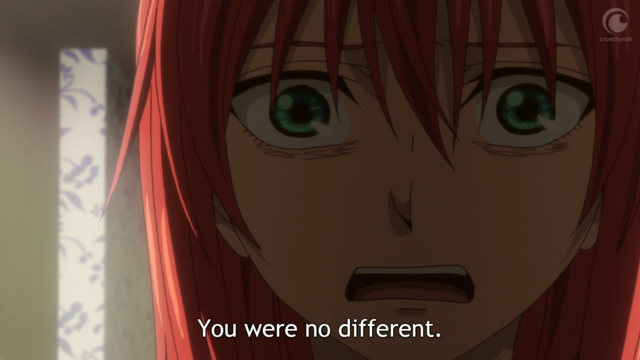 It’s an ending that’s far from storybook, but poetic in its own way. Many of the small betrayals and controlling behaviors that Elias exhibits are far too realistic to be anything but intentional. Building up an insidiously unhealthy relationship by also showing its positive aspects may be palatable but the evidence of Elias’s small betrayals was there all along. To drive us to this breaking point is immensely ambitious for a series that could have maintained its peaceful pace for years and carefully setting up a distinction between supportive and codependent relationships is an admirable direction. No matter where things go from here, this latest narrative turn will cement The Ancient Magus’ Bride in my memory forever, but I think the best path to take now is the one that diverges.