Don't Worry, Sakura, We Can Appreciate Your Culinary Efforts! Your Bento Will Not Be Wasted!

Cooking With Anime by Emily Bushman 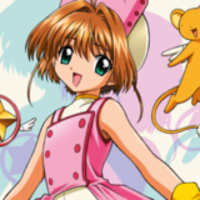 If you've been watching Cardcaptor Sakura: Clear Card Arc or even the original series for any amount of time, you'll recognize that Sakura and Syaoran are the IT couple of anime in 2018. They were able to confess their love to one another in the first series, but in the new arc we are finally able to see them come together and go through a romantic relationship together. It's like everyone's CCS fanfiction dreams come true, except better because it's all 100% canon.

Sadly, Sakura is always busy capturing Clear Cards, and Syaoran seems to always be dealing with the stress of living alone and sorting out his own magical abilities. They hardly have time to be together and be a couple! So when they got to visit the aquarium together again, I, as a humble viewer, was very excited for what was basically their first date since Syaoran moved back. Finally, we could have a moment to ooh and awww over their adorable middle-school love.

And THEN a Clear Card showed up and there went all their lovely plans to look at various fish together. Even worse, Sakura had made a delightful bento for them to share.

If you're unfamiliar, bento boxes are essentially Japanese lunch boxes so "making a bento" typically means making a packed lunch. In Japan, bentos can get quite creative- and competative. When I was living in Japan, my host mom used to compete with other mothers to see who could make the more adorable bentos for their children. I received a Doraemon, a Totoro, and a very cute penguin in a few different bentos. I felt very lucky to have such a creative host mother. 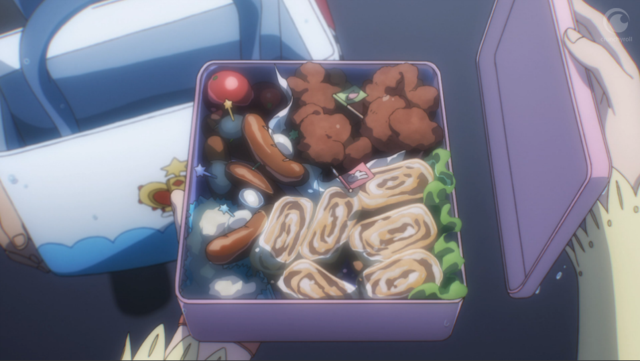 Sakura's bento, by all appearances, was going to be very delicious. According to her, she'd been practicing tamagoyaki and chicken karaage, both of which feature in this bento. They are accompanied by some fried sausages, rice, and what looks to be a medly of cherry tomatoes and mozzarella balls (even though the later ingredient isn't exactly common in Japan. I really wasn't sure what else it could be.). If it's one thing I've come to learn through anime, it's that Japanese schoolgirls tend to want to impress their crushes with their fantastic home cooking, so this bento box fromo Sakura is truly a triumph.

Or, was a triumph.

The bento got ruined by a Clear Card, so they weren't able to eat it. I found this to be a particular kind of food tragedy, so decided to recreate it for you here, so that we could realize Sakura's dream even if she couldn't eat it herself.

It was a good opportunity to try these easy bento foods out. The challenge here is really taking the time to make it all. You can definitely make some of this food in advance, because putting it all together the day of would be quite a challenge. The tamagoyaki does require some special equiptment, but was surprisingly easy to get the hang of. The egg roll I make below is actually my first try. The only thing I would change would be to use a light soy sauce for the eggs, as the dark soy sauce I used altered the flavor a bit. Chicken karaage is also easy, as long as you're not afraid of deep frying things. The oil can be intimidating, but once you get the hang of it goes along pretty easily. Overall, I was surprised at how simple each individual component was! Here is a template for the little flags in the food if you want to make it totally authentic.

A final note- this makes a lot of food, so definitely gather some friends together to try this out- consider taking it for a picnic in the park, especially as the weather is beginning to change (at least in California)! I really hope you can try this out! Watch the video below to get more pointers on how exactly to make this bento!

1. Prepare tamagoyaki. Combine all ingredients and whisk thoroughly. Heat a tamagoyaki pan on medium heat. Oil well. Test egg- a drizzle on the pan should cook through immediately. Pour over a layer that just covers the bottom of the pan.

3. Optionally, you can shape it using a bamboo mat to get a better shape. Set aside to cool.

4. Prep the chicken thighs. Cut into 1-2 inch pieces. Toss with all ingredients except for the potato starch and the vegetable oil. Marinate in fridge for 1 hour.

5. While chicken marinates, prep the mini sausages. Lightly score three times down the side of the sausage, and fry in a little oil over medium-high heat to blister the sausages. Remove from heat and let cool.

6. Heat oil in a deep pan until it reaches 360 F. As it's heating, toss the chicken in the potato starch until each piece is evenly coated. When the oil is at temperature, fry each piece for about two minutes, or until a nice light color. Drain on a rack over paper towels or paper bags. The chicken will continue to cook after it comes out of the oil. Make sure not to overcrowd the pan, or the oil temperature will fall too much, making the chicken absorb more oil than necessary. Let cool.

7. Assemble bento. Place rice and tomatoes/ mozzarella balls on one side. Layer sausages on top. In the two side compartments, add in the karaage. Slice the tamago, and layer on top of a little lettuce.

8. Place cute toothpicks around bento, and you're done!

In case you missed it, check out our last dish: Foil Wrapped Salmon from "Today's Menu for the Emiya Family". What other famous anime dishes would you like to see Emily make on COOKING WITH ANIME?