Japanese pub food is mind-blowing in another world... and for good reason! 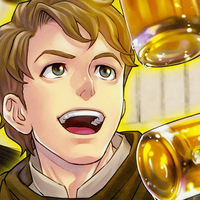 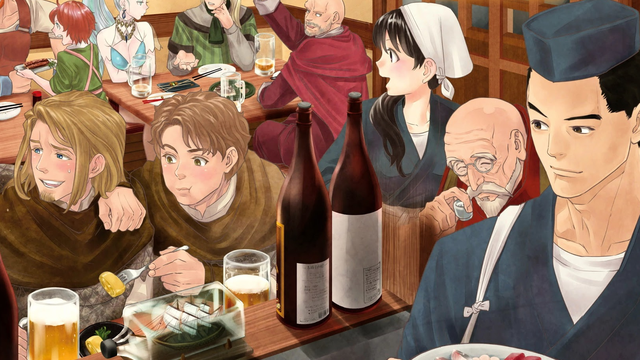 WARNING: Please do not read this feature while hungry!

If we offered you fresh edamame, a hot plate of kara-age, or oden with steaming potatoes, it probably wouldn't take much to get you to accept. Traditional Japanese food is already delicious without any gimmicks, especially when paired with a drink.

But what if you were a poor soldier who'd never encountered concepts like pickling, double-frying, or even serving draft beer cold? The wonders of Japanese pub cuisine go from naturally delicious to straight through the roof. And for the soldiers and citizens of Isekai Izakaya, simple comfort food is a miracle of modern cuisine. 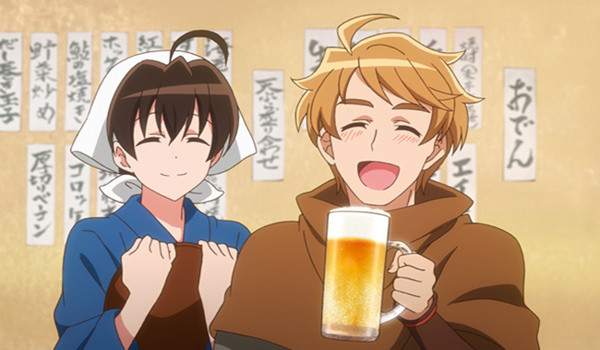 The first thing the denizens of Aitheria fall in love with at Izakaya Nobu is the house specialty, "Whatsontap." Which is, as the viewers know, chilled draft beer. But why does a typical after-work drink blow the minds of Aitheria's soldiers?

We don't know a lot about Aitheria, but we can assume from their use of the word kartoffel for "potato" and the names of their guards that this is a German-inspired world. And beer in Germany in the 1500s was very carefully overseen with regards to ingredients, thanks to the German Beer Purity Law (or "Reinheitsgebot"). Only water, barley, and hops could be used in beer. Wheat was not permitted, and while modern versions of the law make allowances for yeast, the original one didn't -- because yeast in beer wasn't a thing back then. It's not a stretch to assume Aitheria's beers are made with similar standards.

The pale Japanese beer the guards received is not only likely made with wheat or yeast -- it's also served cold. Some beer is better chilled in general, but the cold drink also goes down easier since your tastebuds are slightly numbed... hence the refreshing nature. It's no wonder Izakaya Nobu's "Whatsontap" is a magical experience for the soldiers! 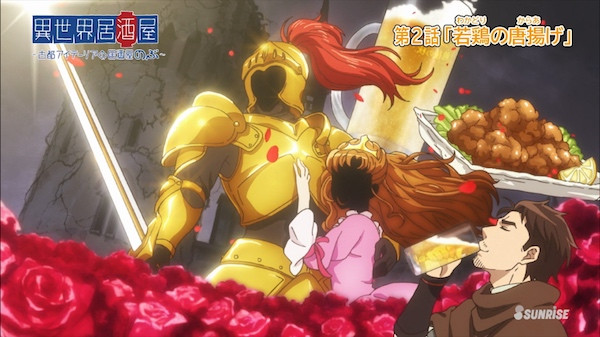 But alcohol is alcohol, so even if Nobu didn't have chilled beer, the soliders would probably happily drink it. But the chicken, on the other hand... Nobu's fried chicken benefits from several things: the process of karaage style frying, double-frying, and the fact that it's made (as Nobu points out) with young chicken. But does that really make a difference? Actually, yes -- and it's something relevant even now in cuisine.

Aitheria's lower classes seem to be a bit hard up for good chicken -- as stated in the second episode, they only eat hens that are too old to provide eggs. Our world's Middle Ages weren't quite that stingy with our poultry, with chickens serving as food, a source of eggs, and occasionally currency. What this says about Aitheria's social classes... well, we'll find out in later episodes, surely.

A hen passes its prime when it's around 10 months to a year old. And that's around when the people of Aitheria would be eating them. But in our world, we have a name for that kind of chicken: a stewing hen. Those are the ones you buy specifically for soups and stews, because their tougher meat will have time to break down in the boiling water. They're also more flavorful... but that doesn't much matter when they're too tough to eat.

Not only that, but our real-world fryers and roasters are raised specifically for their meat -- a concept foreign to Aetheria, it seems. So not only is Nobu's fried chicken made with young hens, it's made with hens who were raised to be delicious. No wonder the commander's mind was blown! 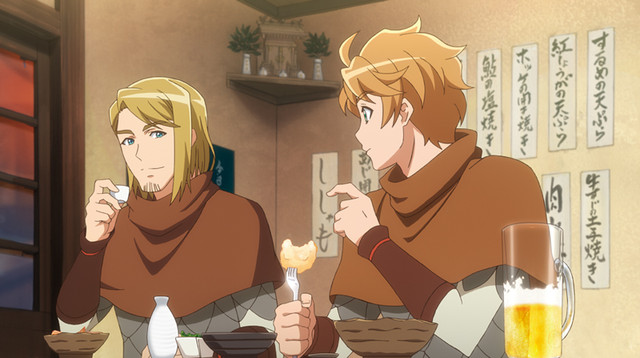 But the magic doesn't stop there! We've still got the potatoes to go! Potatoes were first used for human consumption in Europe in the 1500s, originally for the ill. Initially, people distrusted them because they grew underground and because they grew in the same sorts of fields as poisonous plants. But eventually, they became a staple crop and were grown widely for food. So our soldier friends growing tired of them makes perfect sense, since (if Aitheria is like medieval Europe) they would have been abundant.

That's not the only problem with potatoes. As delicious as they are in all their forms, it's pretty easy to get them wrong. Undercook them and they're tough; overcook them and they're mushy. Nobu had the right idea: cooking up a potato in oden, which is based on a soy/dashi broth, will make sure it's cooked all the way through and add a new flavor for someone who's had nothing but potatoes all their lives. And while potatoes with mustard may seem one of the most German things ever, an oden-cooked potato with a smear of karashi would definitely be foreign (and spicy!) to Aitherians.

The food of Isekai Izakaya is already gorgeous -- especially with each episode ending in a live-action exploration of that week's disk! But when you take into account that the patrons of Izakaya Nobu have likely been living on a lower-class medieval German diet, their reactions to the Japanese comfort food seem right on target.

You may not be a Aitherian peasant, but you still might find yourself a little hungry after all that! Which of Izakaya Nobu's signature dishes would you like to try? Let us know down in the comments!

Watch Isekai Izakaya: Japanese Food from Another World on Crunchyroll!

Tags
isekai izakaya
« Previous Post
Hinamatsuri's Comedic Timing is So Snappy It'll Break Your Neck
Next Post »
From Naruto to Boruto: How Loss and Vision Brought Peace to the Ninja World
Other Top News
1 Comment
Sort by: