Cooking with Anime: The Best Food To Increase Spiritual Energy

This egg and chicken rice bowl is warm, filling, and perfect for raising your spirit! 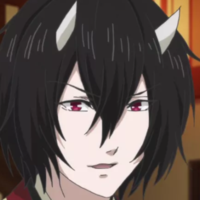 Kakuriyou -Bed & Breakfast for Spirits- initially intrigued me because of the odd premise – a girl's grandfather basically her off to an ogre lord – but I've stuck around for the cooking in the show. What initially appeared to be a story about a girl who has to learn how to survive in the spirit world has transformed into my own personal bizarre quest to figure out what, exactly, Japanese spirits like to eat.

There's lots of talk in the show about how Aoi is great at making food that appeals to the spirits, which begs the question – what makes her cooking so great for spirits? Through the course of the show thus far, she makes some really traditional Japanese foods, so I'm not exactly sure what sets her cooking apart from the average Japanese home cook. Most spirits admit they enjoy eating humans, and apparently her cooking is a great second choice to that. The flavors are *kisses fingers* delicious! 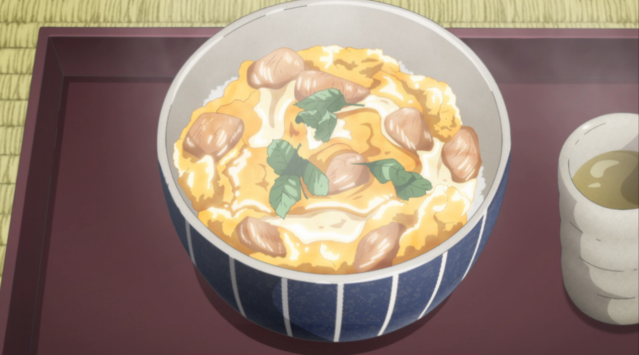 I have no idea what that means. Does the taste of her cooking resemble that of human flesh? Unlikely, as most of the dishes she makes keep to pretty traditional Japanese foods. I mean, seriously, I just took a cooking class while in Japan and we made half of the dishes she feeds the Tengu lord. So I sort of think that what Japanese spirits really prefer is just good old traditional home cooking. Which makes sense, if you think about it. Traditional spirits... Japanese comfort foods... of course!!

One of the dishes Aoi makes is the Oyakodon for the O-Ryo and Akatsuki in order to help replenish their spiritual energy. Apparently, the right foods can increase the very spirit-ness of your soul, and the O-Ryo requests this delicious meal. Oyakodon is an egg and chicken donburi, cooked to perfection with onions in a savory sweet sauce that is really common in Japanese cooking. It's a bit like the chicken pot pie of Japanese food – warm, vaguely healthy, and comforting in the extreme. The perfect recovery food!

And, amazingly, it's incredibly easy to make. I love Japanese cooking because it focuses on simple, clean flavors, crafted to be at their peak deliciousness. This applies here in every way. Don't skimp – make your dashi from scratch. It's easy and barely takes any time, but the flavor benefits are obscene. The mirin, soy sauce, sake, and sugar are perfect in proportion. Don't change a thing – even if the sugar seems a bit odd. Sugar is pretty normal in Japanese cooking, and you should try it before you decide to axe it from the recipe. It compliments the onions really well, and gives the eggs a complexity totally foreign to an American palette.

Try this dish out – the whole thing took me less than 30 minutes to make, making it the ultimate quick meal. It's really satisfying, too. Not just the taste, but the fact that it comes together in a snap and the flavor payoff is uniquely Japanese. Watch the video below to get more pointers on how exactly to make this dish!

**If you enjoy extra sauce, double the ingredients for dashi, soy sauce, mirin, sake, and sugar. Leave all else the same**

2. Over medium high heat, place onions in the bottom of a small frying pan. Arrange in an even layer. Pour over about 2/3 of sauce. Then, place chicken strategically around onion so it is nice and spaced out. Season with salt, and cover with a lid. Cook at medium heat for about 5-8 minutes, or until chicken is white and cooked through.

3. Remove lid and drizzle over remaining sauce. Drizzle egg over the entire dish. Place parsley leaves in the middle of the egg and chicken mixture. Place lid on top, and cook until egg is just set on top.

4. Prepare bowl with rice. As soon as egg is cooked, slide the contents of your frying pan over the top of the rice, making sure parsley is centered.

In case you missed it, check out our last dish: Gousetsu Udon from "Food Wars!". What other famous anime dishes would you like to see Emily make on COOKING WITH ANIME?

Tags
cooking with anime, kakuriyo bed and breakfast for spirits, oyakodon
« Previous Post
Spike Chunsoft RPG Series "Conception" Is Due for an Anime in October
Next Post »
"PUNCH LINE" Game Heads to the West This Summer
Other Top News
1 Comment
Sort by: