Atsushi Morikawa Tries to Draw Backgrounds so Real You Can Smell the Blood! 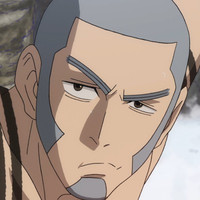 Golden Kamuy's official website is releasing a series of interviews with cast and staff over the course of the Spring season, which we're translating and brining directly to you! They started things off with the character designer, Ken'Ichi Onuki, followed by animal designer, Ryo Sumiyoshi, and this week we bring you the art director, Atsushi Morikawa, whose impressive resume includes credits under the same title working on Cowboy Bebop: The Movie, Sword of the Stranger, and Wolf’s Rain! 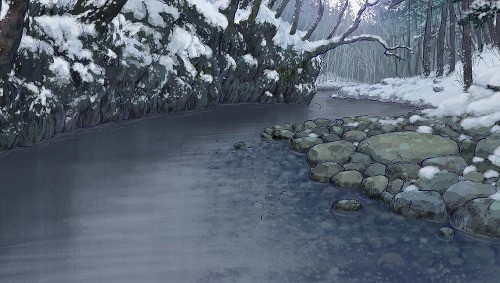 “They call him Immortal Sugimoto, and he really is immortal...” is what I thought. He was kicked,

punched, shot, tortured, and he was still immortal. Also, other characters could be mortally wounded and then come back, wrapped in bandages. I remember thinking that was neat, and then the next thing I knew, I’d read the whole thing. Due to my job, I end up looking more at backgrounds than at the characters. This is really just a problem I have because of my work, so I look at things like what’s drawn, and what the author uses... It’s something I’m very curious about. I enjoy manga that take the time to draw the background instead of skipping it.

Tell us what you focused on when doing the art for this anime.

I thought about how the time period looks when seen from modern eyes. When we modern people think of that time, we think of fuzzy monochrome pictures, old buildings, and displays in museums. The buildings themselves have faded colors, and the wood is all rotting. Even if you’re not looking at a photo, it all seems very monochrome.

Back then, all the building materials were still new and colorful, but if I tried to reflect that by making brightly colored backgrounds, it wouldn’t feel like it should. So I decided to keep the coloring close to monochrome, like the buildings from that time period that still survive today, but keep the buildings new and in good condition.

Tell us something about the unique approaches or techniques you used for this particular anime.

I’m not sure if it’s unique to Golden Kamuy, but whenever I’m doing background art, I try to make good use of “lines.” I render the exterior and a certain amount of the detail with lines, and then color it in. I color these lines differently depending on things like time of day, season, whether it’s an indoor or outdoor scene, whatever’s appropriate, and try to make it so that each location has a different feeling. Outdoor scenes in winter might have a lot of dark blue lines, or I might use brown for an indoor scene or dark blue for a night scene.

For establishing shots, I use paint on paper. It gives me lots of unexpected stains, blots, and overlaps that can sometimes help establish mood. 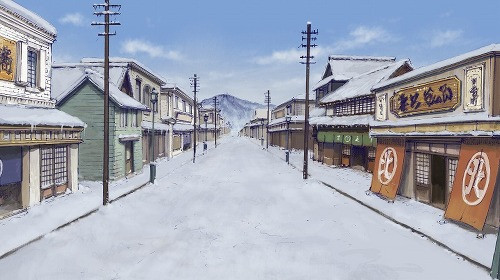 I’m sure you had to do a lot of research on the period and on how the forests were laid out. What parts were particularly difficult?

There’s a number of high-quality photographs available, so thankfully it wasn’t a lot of trouble to look them up. I’d recorded a bunch of movies, half “just in case” and half as a hobby, that I was able to use for research help. I was really glad they came in handy!

When doing the art for areas rooted in Ainu culture, what kinds of details did you put in? If there’s anything particularly important that reflects your personal research or things you were told during the supervision process, please tell us.

I did the design work based on photos of existing Ainu houses and with help from the supervisors. Then it was sent to them for revisions, then I fixed any errors and sent another version off for revisions... We went through that process quite a few times before the final background designs were completed.

The way houses are built, and the way things within them look and where they’re placed varies by region, and seems to also depend on cultural and religious rules. The 5 or 6 rounds of revisions done with the supervisors were a really new and interesting experience to me, but what I particularly remember were the way the goza mats were laid on top of each other, and the location of the inaw. The mats are laid on the floor, but there’s a rule that says that the one facing east, which is a holy direction, has to be on top. The inaw is a religious tool made from thinly shaved wood tied into a bunch, and there’s a particular way you have to tie it up. At first I drew them as being tied to all the pillars at the windows, but they’re supposed to go in between the pillars and the thatch walls. This is something that you’ll be able to see in the actual backgrounds, so I hope you’ll look for it.

Please tell us anything you particularly remember about your interactions with Director Nanba and the rest of the staff.

I work out of a room in my home in Osaka, so I’m not actually in the Tokyo studio. I only actually met the director and the staff during the first meeting, and then the rest of our interactions were through Skype. All of them were very kind and pleasant people. That was my impression watching them through the monitor. They were extremely easy to work with. 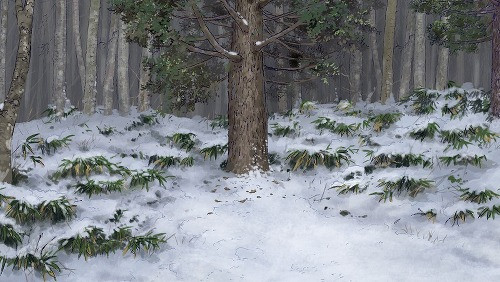 The producer who invited me to work on this project was someone who I’d worked with on several projects more than a decade ago, and the first thing they said after calling me was, “Morikawa, you like this kind of setting, don’t you?”

He was right. I love drawing the beautiful landscapes of Japan, particularly snowy scenes. I still can’t quite draw them the way I see them in my head, but I’m having a great time participating in such a challenging project. Animation is something that stimulates both the eyes and ears, but I hope that my backgrounds can stimulate other senses as well, and make you say things like, “That snow looks so cold,” or “That place looks so shady, it’s scary,” or “I can almost smell the blood.” Those are the kind of backgrounds I want to draw.

As for how much I’ve accomplished that, that’s something I’m looking forward to seeing each week in the finished process. The world of background art isn’t something that gets a lot of attention, but the artists all work very hard on it. I hope you’ll pay attention to the background art as you watch.

Peter Fobian is an Associate Features Editor for Crunchyroll, author of Monthly Mangaka Spotlight, writer for Anime Academy, and contributor at Anime Feminist. You can follow him on Twitter @PeterFobian.
Tags
golden kamuy, atsushi morikawa, interview, peter fobian
« Previous Post
Freedom: The Draw of One Piece's Central Message
Next Post »
Is a Yakuza a Better Dad Than Naruto?
Other Top News
2 Comments
Sort by: