Tomorrow Beyond Death: Death and Rebirth in MEGALOBOX

Let’s explore the use of death as a metaphor in MEGALOBOX! 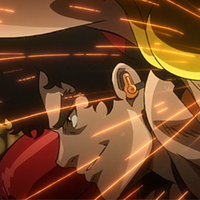 Ashita No Joe is an iconic anime and manga series with a similarly iconic scene: the death of Joe at the end, displayed in stark ashen white, grey and black. With MEGALOBOX picking up as a 50th anniversary project for Joe, the idea that this new Joe might meet a similar fate is a popular topic amongst viewers; the show itself constantly teases the audience with episode titles like “The Man Only Dies Once,” but is this really just a feint for a more interesting take on the proverbial end of the road? 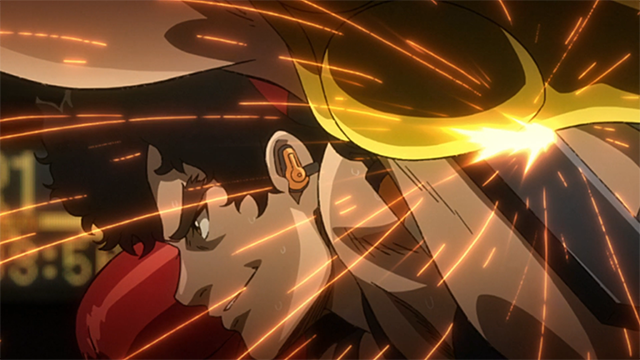 The original Joe’s tragic but poetic death is one of the most iconic scenes in anime, creating 50 years of parodies, homages, and even figures capturing that distinct, specific, and poignant moment. With MEGALOBOX’s obvious nods to the series, the idea that the main character of this update would meet a similar fate seemed like a potential turn off, since knowing the outcome a match before it starts doesn’t make it very interesting. But MEGALOBOX seems to be playing with a very different take on death. Instead of the end, death is just a new beginning, and not just for Joe.

Our first encounter with Joe (known as Junk Dog at the time) is as he crashes his motorcycle, seemingly on purpose, frustrated at his having to constantly throw fights in fixed underground boxing matches. Nanbu, his coach/partner, has to keep yanking on Junk Dog’s leash to make him co-operate… until he decides he can’t anymore, landing both of them on the chopping block. Death is quite literally staring the pair in the face as Fujimaki bargains with them: make it in to Megalonia, starting with nothing, or die. 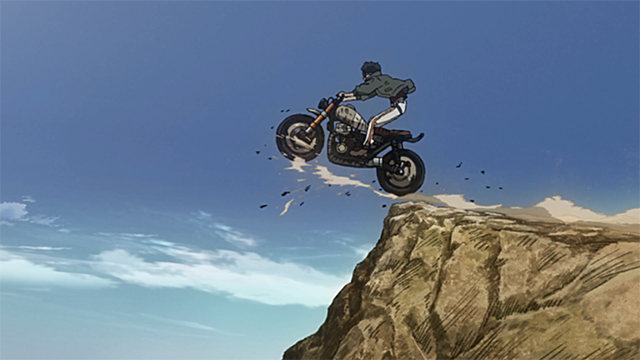 Junk Dog seems totally unfazed, taking his new name of ‘Joe’ with ease and eagerly looking to restart his life in the ring, fighting his way to Megalonia and, ideally, Yuri. For Joe, all that matters is that he gets to box the way he wants to, rather than being forced to be an actor in fixed bouts. But even this reboot doesn’t go off without a hitch; Joe soon finds himself competing as “Gearless Joe,” due to being unable to purchase any Gear worth anything in the ring! 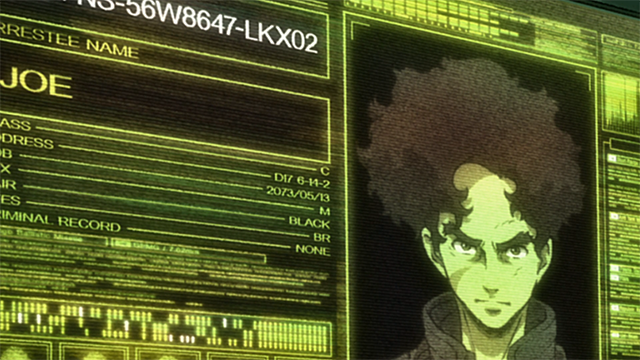 Nanbu is just as important to the journey of Joe as the original Joe’s coach, Danpei, and the two have a lot more in common than their lost eyes and knowledge of the sweet science: the rebirth that their respective Joes bring. Nanbu starts MEGALOBOX as a drunk, down-on-his-luck fixer, trying to keep Junk Dog on a tight leash while repaying his debts to Fujimaki. But as the series goes on, we learn that Nanbu was indeed a respectable boxing coach, particularly to up and coming star Aragaki… until Aragaki is drafted for war. 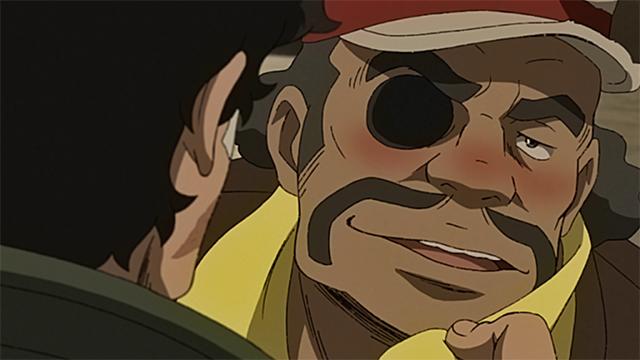 After seeing a news report that Aragaki was reported Killed in Action, Nanbu’s gym falls into shambles as he despairs, which eventually leads him to the place the viewer finds him in episode 1 of the series. Nanbu’s “death” in this case was the supposed death of his star pupil, his career, and his gym, creating a somewhat cowardly and weak-willed man simply trying to get by until Joe’s obsession with “real” boxing puts them on the path to Megalonia. This brings the newly reborn, but still unsure, Nanbu into direct contact with a ghost… Aragaki himself! 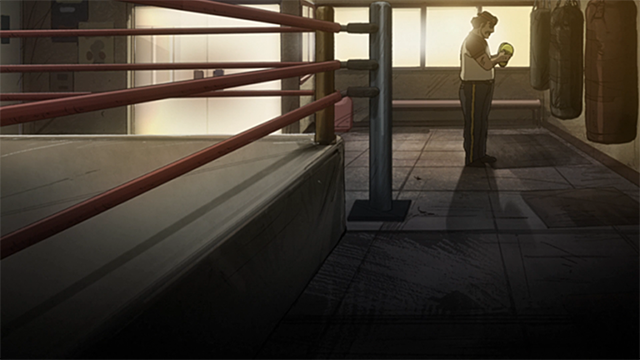 There may be no better representative of the way MEGALOBOX plays with the idea of death as a new beginning as Aragaki. Nanbu’s original student, drafted to war, reported dead after an explosion killed his squad – yet Aragaki lived… at great cost. Aragaki lost his legs, and the rest of his body was badly scarred and burned from his injuries. Returning home from war, he finds that the world he left has moved on without him, and his home, Nanbu’s gym, is deserted. With nowhere to go and living as a ghost, Aragaki considers taking his own life… but a chance discovery sends him back to the ring of Megaloboxing. 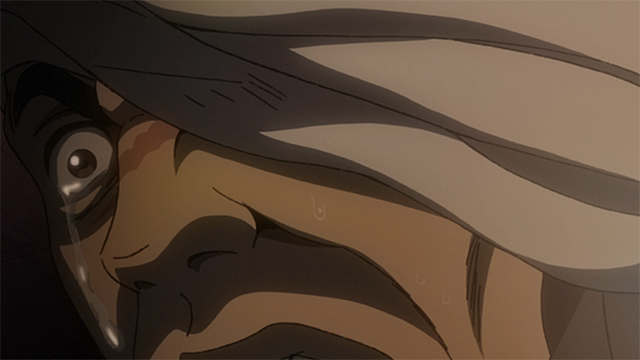 When Joe meets Aragaki, the man from Nowhere meets the man who died, tied together by their coach: Nanbu. At first, it seems that Aragaki is simply trying to punish Nanbu for not believing in him and waiting. But after his bout with Joe, it becomes clear that this fight was what he needed to move on with his life into a new phase: to leave boxing behind and restart on the second chance his supposed death gave him with no regrets and reservations. Aragaki the soldier had already died, but thanks to Joe, Aragaki the boxer has also passed on, ready to start a new life without the ghosts of the past. 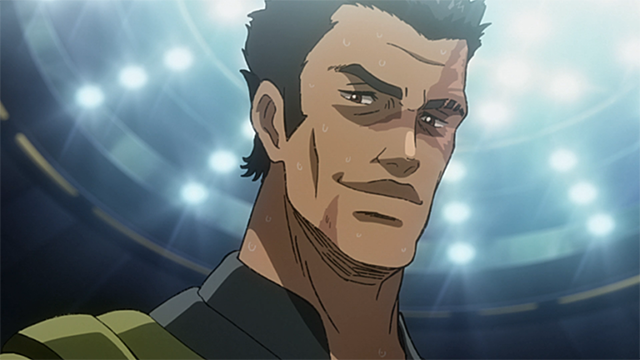 Joe’s journey to Megalonia is getting increasingly closer, perhaps signaling a new metamorphosis and rebirth for the fighter. But that doesn’t seem to bother him too much; Joe and the rest of Team Nowhere have already shed their past lives, and have no direction but forward. Nanbu and Joe must make it to Megalonia or face perhaps fates worse than death at the hands of Fujimaki, and Sachio has no home or life to return to, throwing in his lot with Joe after fate brings them together. 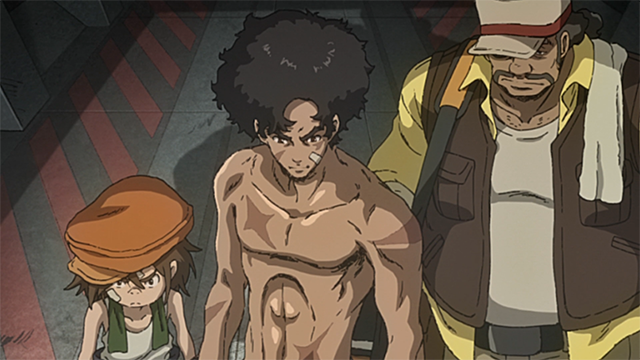 Team Nowhere is a more symbolic name than it originally seems: they all come from nowhere, they have nowhere to return to, and they have nowhere else to go. On the other hand, depending on how you look at death, they’re also all people who came from that nowhere and have started taking steps towards a new tomorrow. 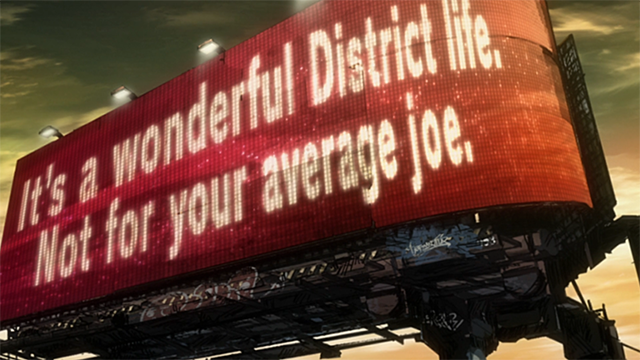 Playing with what the audience expects out of their media is nothing new, and the little jabs and nods towards Ashita no Joe’s classic ending in MEGALOBOX’s theme is definitely a continuation of that. Where MEGALOBOX takes things a bit further is the way it uses those ideas of death by not having them be representative of finality: in the original, Joe’s death was the end of his journey and the culmination of everything he worked for.

In this new work, death is just the beginning for characters, a metaphor for letting go of the past and stepping into the future – be it taking on a new identity, finding new purpose, recapturing zest for life, or simply putting the things weighing you down to rest so you can finally get on with your life. Where that will eventually end up has yet to be revealed, but what seems certain is that MEGALOBOX is ready to play with what we expect to happen. 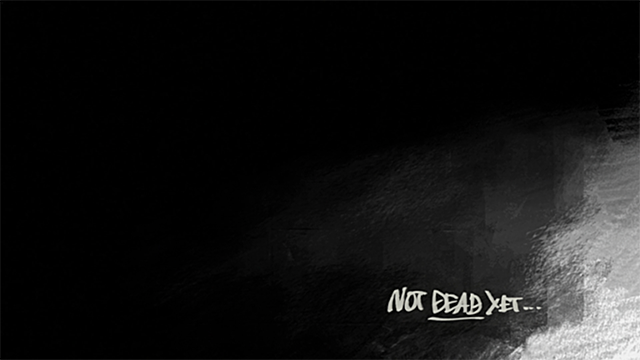 What do you think is going to happen to Team Nowhere? Let us know in the comments!

Make sure to catch the latest episodes of MEGALOBOX on Crunchyroll!

Tags
megalobox, ashita no joe
« Previous Post
Koji Watanabe Designed Everything from Pistols to Howitzers for Golden Kamuy!
Next Post »
Crunchyroll to Screen "Cardcaptor Sakura: The Movie" at ACEN
Other Top News
3 Comments
Sort by: