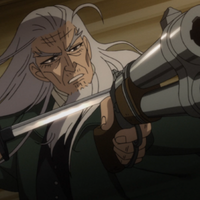 Golden Kamuy is a bit reminiscent of a Western, with its focus on a hidden treasure, indigenous people, and a wild frontier. The addition of lawful evil and not-so-lawful evil rivals searching for the same Ainu gold suggests the title of the famous Sergio Leone spaghetti western (The Good, the Bad and the Ugly). If you're having trouble keeping track of all of the players, and their origins in this war-torn period of Japanese history, this guide aims to help you tell the good from the bad and the bad from the criminally insane.

The Good: Our Heroes 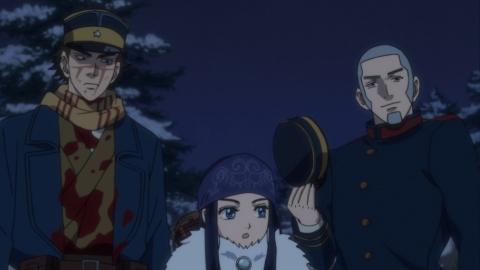 First off, we have our heroes, the somewhat less bloodthirsty treasure hunters whose aim for the gold is to help others or themselves. We have "the immortal" Saichi Sugimoto, a seemingly fearless soldier who survived the brutal Battle of 203 Hill in the Russo-Japanese War. Having angered a superior officer, he returns to civilian life in poverty, desiring to help a departed friend's widow with deteriorating eyesight. With the gold, he plans to take her to America to see the best eye doctor around.

With him is Ainu girl Asirpa, who cares not for treasure but wishes to avenge her father, who was one of the Ainu who worked to gather the gold to secure their independence. She is protected by a wolf kamuy Retar, perhaps the last surviving Ezo Wolf in all of Hokkaido. Finally, we have escape artist and general ne'er-do-well Yoshitake Shiraishi, one of the tattooed prisoners whose skin is a literal treasure map. Shiraishi joins and leaves Sugimoto's orbit as he sees fit. He's in the hunt just to save his hide (literally). 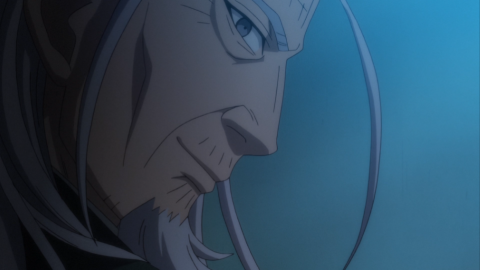 If the Shinsengumi sound familiar, that's because they are. Hijikata Toshizou (shown above), one of the most famous Shinsengumi members, has appeared in countless manga and anime, perhaps most memorably in Gintama, Touken Ranbu - Hanamaru, and Drifters. When Commodore Perry opened Japan up to trade with America in 1853, it spurred rebel provinces Satsuma and Choshu to begin anti-government activities in the name of protecting Japan from foreign invaders. The Tokugawa Shogunate, in an attempt to fight these rebel activities, formed the Roushigumi, or "ronin squad," in 1862. The ronin were divided between those with loyalty to the shogun in Edo, and those who revered the emperor in Kyoto. When shogun Tokugawa Iemochi traveled to Kyoto in 1863, the Roushigumi lead the way ostensibly to guard him, but when Iemochi left, many stayed in Kyoto. This most radical faction of ronin would become the Shinsengumi.

Hijikata was known as the Demon Vice Commander, the enforcer of all Shinsengumi regulations in Kyoto. Deserters and traitors were forced to commit seppuku by him, including members who had considererd him a friend. The Satsuma and Choshu rebels the Shinsengumi fought ultimately prevailed in the Meiji Restoration, but Hijikata and his companions resisted to the end. As losses in the 1868 civil war mounted, Hijikata and holdouts of the shogun's government traveled to northern Honshu and finally Hokkaido (then still called Ezo). Some 3000 rebels declared the existence of the Ezo Republic, where Hijikata was made vice-minister of the army. In real life, Hijikata was killed in the Battle of Hakodate, but Golden Kamuy presumes he lived on to hunt for the Ainu gold. With the money he seems to want to restore the Ezo Republic, using the Ainu and other indigenous people of Hokkaido as his soldiers.

The Deranged: The 7th Division 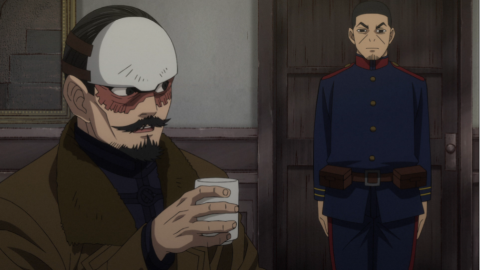 While Tsurumi and his innovative medical intervention holding his brain intact are fictional, the 7th Division was, in fact, real. Following the Sino-Japanese War, the Japanese military was reorganized and the 7th Division created in May 1888 in Sapporo, Hokkaido. The 7th Division was charged with defense of Hokkaido from Russian aggression and played a key role in the Russo-Japanese war, where it was assigned to the Siege of Port Arthur, including the Battle of 203 Hill of which Sugimoto was a part. While Tsurumi is dangerously eccentric and wishes to make Hokkaido a kind of soldier's haven, his complaints fit historically with the prevailing sentiments of the era.

Losses in the Russo-Japanese war were extreme. The Battle of 203 Hill cost 8000 Japanese casualties, compared to 6000 Russian. The Japanese had an unbroken string of victories, but at extreme cost, often hidden from the broader Japanese public. The Treaty of Portsmouth, which ended the war, was viewed by many Japanese as stingy, and reparations to the overtaxed and exhausted Japanese public were seen as insufficient. Riots erupted in major cities due to the terms. In such a climate, Tsurumi's plan of using the Ainu gold to create a nation for the war's forgotten seems almost charitable. Until you remember, of course, that he wears one of the prisoner's skins as a shirt and bites people's fingers off. Still, he's smart enough to know that he should let Sugimoto's group assemble the prisoners for the time being.

What makes Golden Kamuy so interesting is that even its most eccentric characters have a grounding in the history of the era. How their plans will develop will likely grow more twisted and complex as the series progresses, but always in ways that enrich our understanding of the time. Where do you think the treasure hunt will take them next?

Tags
golden kamuy, history, action, shounen, hokkaido, meiji, shinsengumi, gintama, drifters
« Previous Post
Family is What You Make of It in HINAMATSURI!
Next Post »
When War Comes Home: The Loss of Innocence in Invisible Victory
Other Top News
0 Comments
Be the first to comment!
Sort by:

QUIZ: What Non-Unique Skill Would You Have in the Slime Universe?