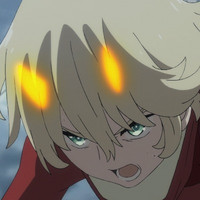 Welcome to Last Week in Anime, where we look at some of the greatest clips from the last seven days! The shonen wave continues to swell with Black Clover entering what looks like another set of fights, Food Wars! seeing their Regiment de Cuisine topic announcements, and My Hero Academia setting up its own titanic clash. Pitou also got to let loose. But even bigger than the battles are all the twists being thrown our way. With just a few episodes left, all the anime are reaching their dramatic peaks and unexpected plot developments. So, let’s take a look at all of last week’s biggest surprises!

In retrospect, this shouldn’t have been much of a surprise. DARLING in the FRANXX set the stage for the final conflict in TRIGGER’s favorite spot to hold climactic battles. Space. There’s always a new villain revealed in the second half of their anime and, though, this one took a bit longer, the series didn’t disappoint by introducing alien invaders who have infiltrated humanity and driven it toward its own extinction for decades. Your mileage may vary about these new developments, but, along with the reveal, we got to watch some planetary canons at work so some supersized mechs battling in space seems like a sure thing.

From one of the most stylish anime this season, saying this clip contains the image that will probably stick with me the longest says something. The shot of Joe on the matt is painful to look it. Just as quick glance gives you the sense of the defeat and betrayal he feels as he waits for the count to reach ten. Yuri and Sachio’s words don’t reach him but Nanbu’s does. Joe’s shady coach finally getting his defiant moment was worth the long build up and his plan to extricate themselves from debt to the mob is even more surprising than his last minute call of support. All that’s left is the final showdown.

Boruto just keeps accelerating, not even giving us time to process the sudden end of the chunin exams with the discovery of Boruto’s kote before the Otsutsuki invade and things start looking a lot more like the conclusion of Naruto’s own chunin exams. This scene, as well as Momoshiki’s opening salvo, have some breathtaking effects animation, but the surprising part is some pretty heavy implication that Naruto is about to fulfill the role of the 3rd Hokage in the original chunin exams and sacrifice himself for Konoha. The preview for the next episode didn’t help with a shaded picture of the original Team 7. Movie viewers probably know whats up, but for the rest of us… ???

An animation reduction laser! Magical Girl Ore already gave up the twist the week before with Konami walking into his apartment greeted by his demons servants, but what’s really surprising here is just how brave Ore is willing to be with its humor. After an entire episode dedicated to poking fun at animation production, they throw in a last minute gag were the enemies attack lowers the animation quality and play it off both as an effort by the anime staff and an event occurring within the series. Half the time I have no idea what this anime is trying to say, but I’m always impressed by how far it’s willing to go to say it.

I suppose I shouldn’t be surprised by Shiraishi getting owned by nature, but Golden Kamuy is endlessly creative in the ways to make him suffer. For those who haven’t watched the show, this clip really illustrates the great humor of the series as they set up the joke with a well-researched history lesson, put Shiraishi through the ringer, and circle back with something absurd. You get to learn and laugh and, of course, watch them eat the fish just afterward. Also Sugimoto and Shiraishi admiring spring flowers is a treasure that deserves to be chronicled on Youtube forever.

That's all for last week! What was your favorite moment that you'd like to watch on repeat? Did any moments shock or surprise you? Let us know in the comments below!