Beats and Flow: Discover the Hip Hop Groove in Anime!

Let's take a look at hip hop’s growing relationship and history with anime! 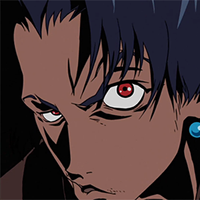 When hip hop and rap come to mind, you might think of classic songs, clothing styles, and dances from singers like Public Enemy, Beastie Boys, KRS-One, or Run DMC. What may not be your first thought, though, is anime! However, anime and hip hop have a pretty long-standing relationship, reflecting the popularity and growth of hip hop and rap in Japan over time. Hip hop first appeared in Japan in the 80s, credited to the time Hiroshi Fujiwara spent in the United States before bringing records back with him and becoming the first DJ in Japan. From there, hip hop and rap spread throughout Japan’s music and cultural circles, influencing music, clothing, art, and, of course, anime!

The relationship between the two is not as strange as it might sound, because anime is an audio-visual medium where creators are regularly trying to find new and exciting ways to engage their audiences, or mixing various musical styles with animated styles to find the perfect combination between aesthetics, much like mixing flavors together to find just the right blend for a pleasing bite. 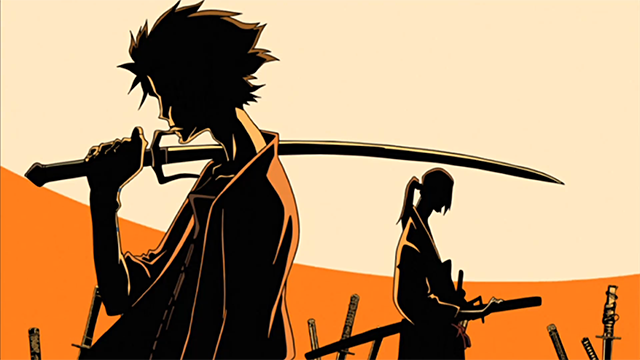 Probably one of the most classic examples of this relationship is the soundtrack to Shinichiro Watanabe’s Samurai Champloo. Champloo followed Cowboy Bebop as an exciting mixture of genres. But where Bebop pushed jazz, Westerns, and sci-fi together, Samurai Champloo mixed hip hop and Edo-era samurai films. Watanabe is quoted as saying: “When I first come up with the idea of what I am going to create, quite often the music appears at the same time. So, with Samurai Champloo it wasn’t that I had the story in mind and then added hip hop to it. When I came up with the character of Mugen I heard hip hop at the same time, and I thought he was going to be a rapper samurai.”

That type of direction in thematics with music helped Watanabe enlist the help of hip hop artists Tsutchie and Force of Nature to create one soundtrack, and late hip hop artist Nujabes to produce two more records for Champloo. While Bebop didn’t lack for action, Champloo’s focus on swordplay and singular combat let various types of musical styles play out over the series, from R&B ballads to banging rhymes and beats. Many fans will still likely remember the beats to the opening and ending of Champloo, helped along by their extremely memorable music tracks and vocal mixture, with the ending song, “Shiki no Uta,” being particularly memorable! 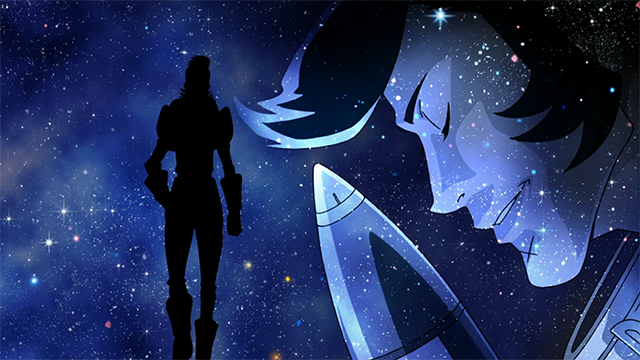 Champloo wouldn’t be the last Watanabe series to mix visual aesthetics with audio tunes, as his next work Space Dandy regularly smashed genres and styles together in its attempts to send Dandy and co. on numerous crazy adventures. mabanua’s “I Want to Know” from episode 5 helped build the relationship established between Dandy and the wayward Adélie, as well as giving viewers a peek into the personality of Dandy beneath all of the bluster (a side that up to that point hadn’t really been explored yet). The soft vocals over the hip hop beat worked to establish the song as memorable, and its use in the episode was a key to making the episode itself shine!

And if you're thinking the name mabanua sounds familiar, you might be following MEGALOBOX! Moving up from guest appearances, mabanua is in charge of music for the series, the title track “MEGALOBOX” and the “Intermission” track creating an iconic atmospheric sense of identity around the show. They're rough, hard-hitting beats that really connect with the main themes of the series and its gritty take on futuristic boxing and fighting to survive. 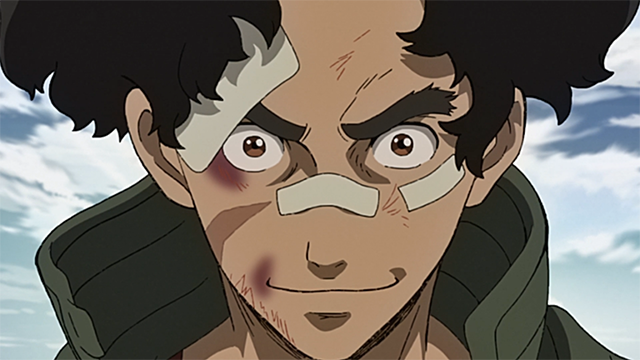 Thematically, hip hop has featured in episode 7, “The Road to Death,” and episode 11, “A Deadmarch,” as important set pieces. Episode 7’s rap from an unnamed kid from the slums plays over the montage of Joe’s rise to popularity as an “everyman” contender, while episode 11’s rap from Sachio serves as the rallying cry for Team Nowhere to overcome their doubts and break free from the control of others over their fates. As MEGALOBOX moves toward its conclusion, it seems likely that hip hop will continue to serve as an important aural factor in setting the scenes! The MEGALOBOX Original Soundtrack, by the way, drops on June 27th and it features a whopping 47 tracks full of musical goodness. Don't miss out on mabanua's latest work!

For many, however, hip hop is more than just music. The somewhat contentious debate over the difference between hip hop and rap usually boils down to a question of culture, and in that regard, hip hop in anime tends to blend into the style of the shows it infuses. As mentioned above, Samurai Champloo’s fluid mixture of styles relies on hip hop music to act as a lynchpin; Space Dandy, a show made up of constant references, pastiches, and homages, similarly selects music appropriate to the animation style and content befitting the episode best. 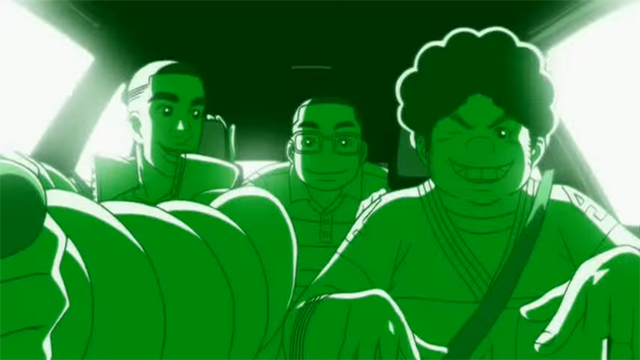 But beyond visual aesthetics of animation, sometimes the clothing, grooming, and aesthetic styles of hip hop and rap culture are just as important as the music, such as in Santa Inoue’s Tokyo Tribe series! Although never released in America, Inoue’s hip hop-infused works blend references and parodies of hip hop personas and lifestyle into stories of rival gangs and dramatic action.

And Inoue’s manga and anime are just the tip of the iceberg in his hip hop empire; his brand of clothing, Santastic!, draws heavily from hip hop stylings, and he’s even helped create album art for numerous records. In a somewhat obscure note, his art was featured in an episode of ABC’s old home remodeling show Extreme Makeover: Home Edition! And in 2014, Tokyo Tribes was adapted into a live-action rap musical, if you’re interested in checking out some manga to anime to live action hip hop gangster action! 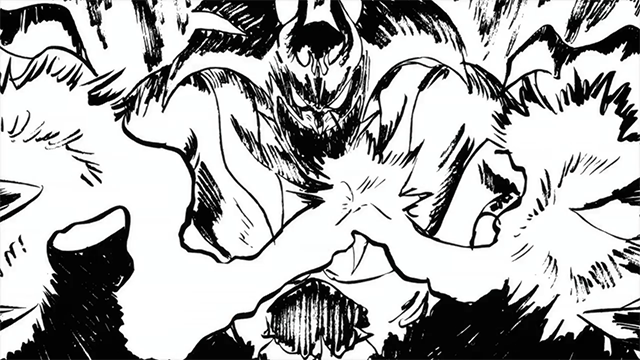 Not to be left out, Devilman Crybaby features its own intriguing hip hop mixture. While the show is an updated retelling of Go Nagai’s classic tragedy action series, one of the more compelling changes to the series was the introduction of rap to Wamu’s gang. Between scenes featuring Akira, Ryo, and Miki, these freestyle rap segments featured the talents of Ken 390 and Young Dais, with beatboxer AFRA, serving as a type of narration of events and issues going on in the series, particularly things happening to everyday people behind the scenes.

Of note is that all three of these performers have been involved with anime and hip hop in the past: Ken 390 performed on the single for Cyborg 009 Call of Justice, Young Dais has a starring role in Tokyo Tribes live action film, and AFRA is the beatboxing Shinpachi from Samurai Champloo! 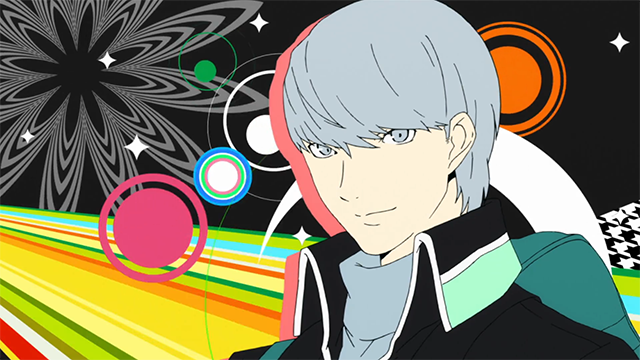 As time goes on, there will likely be many more hip hop and anime collaborations to come; Lotus Juice’s iconic mixes from the Persona series have found their way into their animated counterparts, and the reciprocal nature of hip hop and anime’s cultural growth and exchanges are sure to continue as both expand and evolve with the times. Afro Samurai already paved the way for Western hip hop artists to work with anime production, with the Wu-Tang Clan’s RZA producing the music for the mash-up anime and movie series, so there’s no telling where the future of hip hop and anime collaborative pairings could go!

Have any favorite hip hop and rap songs from your favorite anime? Or know of any other hip hop influenced anime? Let us know in the comments!