Cooking With Anime: Miso-Plum Cucumber and Okra Salad from Kakuriyo -Bed and Breakfast-

This light yet tasty salad is the perfect thing for a hot summer's day! 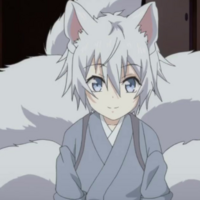 Aoi-chan, from Kakuriyo -Bed and Breakfast for Spirits-, really knows how to wow with her cooking, which is probably why I've been obsessed with her food lately. A week or so ago I showed you how to make the stewed pork belly, the highlight of the meal for the important ayakashi couple, but also served with that meal were some side dishes that looked quite delectable.

Today we're focusing in on the miso-plum salad. At its essence, it's composed of blanched okra, cucumber, shio umeboshi, and dressed in a mayonnaise flavored with plum and miso. The mayonnaise is what really stood out to me as being bizarre – I'd never heard of such a flavor combination in what is essentially an egg- and oil-based sauce. I decided I really wanted to try it and see what I could come up with, especially since I'd never made mayonnaise before. 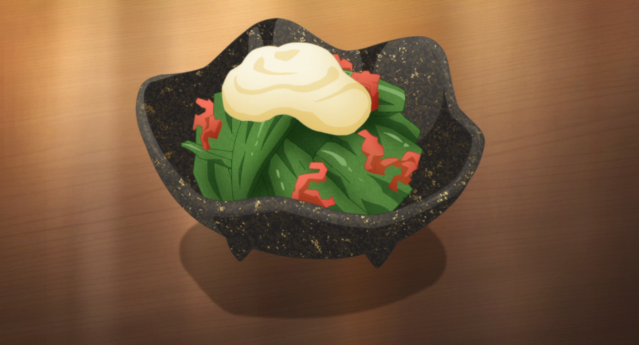 WELL, let me just tell you, mayonnaise is no easy beast to conquer. Essentially, mayo is an emulsion of egg and oil, meaning that if you blend them together with the right timing and quantities, the two ingredients will undergo a forced combination whereby the oil will be dispersed throughout the egg in tiny droplets, creating the fluffy, creamy texture of mayonnaise. Making specially flavored mayo, like the plum miso I was trying to create, is really not the challenging part – getting mayo to emulsify is the real challenge. I tried twice, and then gave up, as I'd run out of lemon juice. The first time, I added the oil in WAY too quickly, so the oil didn't disperse through the egg quickly enough. It was a scrap. The second time I did much better. I only dribbled the oil into the food processor. I stopped every thirty seconds or so to make sure everything was being incorporated in. It was going so well. And then I got cocky, added in a splash too much oil, and it all collapsed. Tragedy was strong in my heart, and starvation was strong in my stomach. I decided to just do it the easy way.

The easy way is to take all the flavorings you want to put in your mayonnaise... and add them into pre-made mayonnaise. It takes significantly less time, with near similar results. In fact, if you don't like eating raw egg, this is the path I'd take since homemade mayo is made with raw egg. Once I'd overcome this challenge, it was time to move onto the main food components – the cucumber and the okra.

Cucumber was a no brainer. Just cut into sticks, and then shorten those sticks into two inch pieces. DONE. Easy. The okra... well. If you've ever cooked with okra before, you know it's a VERY slimy food. Really, it secretes slime like you wouldn't believe, almost as if it does not want to be consumed by others. Funnily enough, this slimy texture is actually pretty common in Japanese cooking. Natto, if you've heard of that, has the same slimy/sticky effect, as does yamaimo, a mountain yam commonly found in Japan. These foods are popular, especially with the older generation who grew up with these foods. Some people really like this slimy texture, so while you can cook okra in such a way to reduce the slime, I decided to just blanch it and leave the sliminess as is. Aoi was trying to cook for an older couple, so I thought that it would be really appropriate, even though I feel people here in America would be a little grossed out by it.

I'm happy to report that the whole dish was fantastic. I really didn't notice the sliminess of the okra at all, especially dressed in the mayonnaise. The cucumber was nice and crisp, and the saltiness of the mayo did a great job of seasoning the vegetables and contrasting with the slight pepperiness of the okra. Aoi really knows what she's doing in the kitchen!

Click to watch the video below to see the full process!

To Make the Plum Miso Salad

1. Make mayo. You can do this from scratch, or just mix your mayo with the miso, lemon juice, and 1-2 of the umeboshi, which should be mushed to paste with your fingers. Set aside.

2. Blanch okra in a pot of boiling water, cooking about 2-3 minutes and then immediately dunking in ice water. Slice in half so the insides are exposed, and then cut into 2-inch pieces if okra is especially long.

3. Cut cucumber down into two inch pieces. Combine cucumber, okra, salt, and a dash of sesame oil in a bowl.

4. Arrange half of the cucumber and okra nicely in a serving bowl, and decorate with slivers of shio umeboshi with half of the mayo.

In case you missed it, check out our last dish: Hot Tub Tamago from "Kakuriyo-Bed and Breakfast for Spirits-". What other famous anime dishes would you like to see Emily make on COOKING WITH ANIME?