The Frontier Western Crime Ainu Cooking Comedy Saga is unlike anything you've seen before! 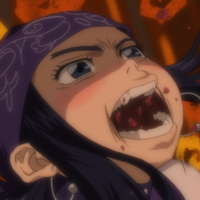 Before Golden Kamuy's anime started this spring, I'd had the manga recommended to me by a lot of thoughtful friends. But it's hard to keep up with all of the anime and manga coming out these days, so I didn't get to the series until I came to it blind upon its April premiere. I was immediately intrigued by its focus on Ainu culture, which has gotten little focus in Japanese media, but over the last three months I've been staggered by how unpredictable and entertaining Golden Kamuy really is. 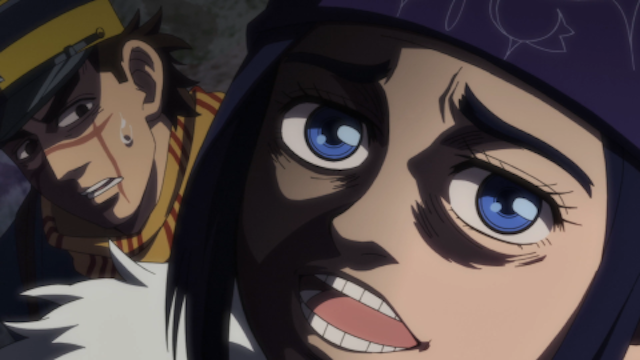 For the completely uninitiated, it can't hurt to start with the show's initial hook: Golden Kamuy takes place in the frontiers of snowy Hokkaido at the turn of the 20th century. At this time, Japan is still modernizing and consolidating its rule over the icy northern reaches of Hokkaido, and members of the indigenous Ainu people still have the last bit of control over their way of life.

In the story, a brave, seemingly invincible solider named Saichi Sugimoto has traveled to Hokkaido to look for gold to help the widow of a friend get medical care. There, he learns of a massive criminal conspiracy: A stash of gold has been stolen from the Ainu and hidden away, and the only map to the prize tattooed on the skins of prisoners escaped from the notorious Abashiri Prison. Sugimoto teams up with a young Ainu girl named Asirpa, whose father was murdered in the gold heist, and together they decide to hunt down and copy the prisoners' skins. It's almost like an American Western in its hunt for gold on the lawless frontier. 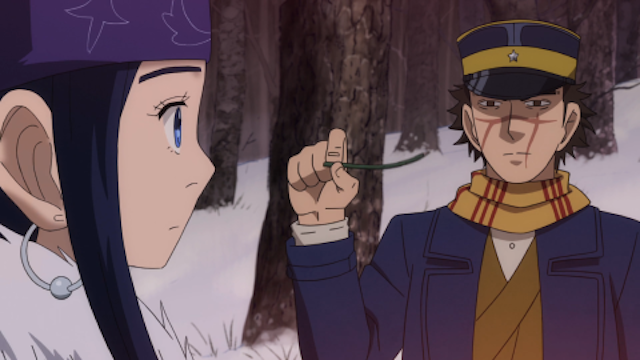 As interesting as the premise is, the key to any great story is its characters. So far, there are three main leads that complement each other perfectly. First is Sugimoto, the soldier, an invincible fighter with a code of honor. He seeks the gold to help his friend and to help Asirpa, but knows there are lines he crossed in war that he can never uncross. If people get in his way, or seek to harm him or Asirpa, he will kill them without hesitation. That is the lesson he learned on the battlefield.

Asirpa, in a way, is his perfect foil. Innocent and naive, she refuses to allow Sugimoto to kill the prisoners for their skins, instead insisting on copying the tattoos by hand. Raised in the harsh wilds of Hokkaido, she knows how to survive and what to eat, but is surprised by Sugimoto's odd dietary habits.

The third member of our gang is Minoru Shiraishi, a tattooed prisoner known as a talented escape artist. While basically a good person, he's cowardly and up to no good, and is easily intimidated by anyone who threatens him. Sometimes he'll help Sugimoto, and other times, he'll betray him. Together, the three of them have a terrific chemistry, both for drama and comedic moments. 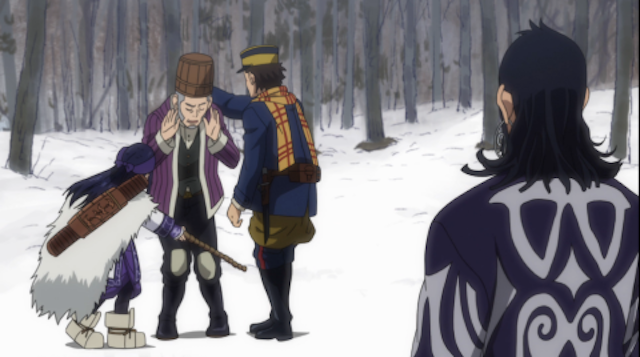 Another key to Golden Kamuy's appeal is its cast of wild and crazy foes. While deranged and dangerous, all of those trying to beat Sugimoto to the gold have goals and motivations that make historical sense. Lt. Tsurumi, a spurned veteran of the Russo-Japanese war, wants to create a soldier's paradise for his fellow veterans. Shinsengumi member Toshizou Hijikata wants to continue the Boshin War against the Meiji Government and re-establish the Ezo Republic in Hokkaido. And like the series Hannibal, hunting down tattooed prisoners entails going up against a rogues gallery of maniacs, from sexually deviant serial killers, to hunters who want to kill the last Ezo wolf, to cannibals who want to become the perfect human. 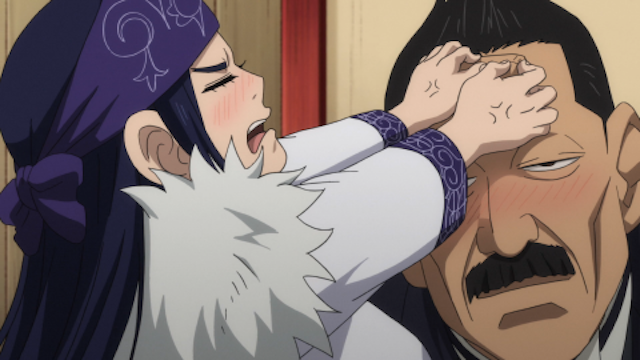 If this wasn't enough, I can't neglect to mention the different of cooking anime segments that run throughout Golden Kamuy. In the wilds of Hokkaido, you have to eat what you can find, and Golden Kamuy gives information on how to hunt and eat squirrels, deer, tanuki, and all manner of fish. It's a surprising and educational look at the indigenous cuisine of the Ainu people, presented with a kind of eye for detail that you might not expect from an adventure series. You might not being trying any of the unusual dishes anytime soon, but it certainly makes for entertaining television.

Finally, what I've being trying to communicate through my screenshots for the piece is that, despite the life and death search for gold in the barren wilderness, Golden Kamuy has a bizarre sense of humor. Not just in the GTO or Golden Boy style faces that you've seen, but in the creation of a lot of the scenarios the characters find themselves in. Things start simple enough with Asirpa's mistaken belief that Sugimoto's tin of miso is full of poop. But we soon go to Lt. Tsurumi's injury causing his cerebrospinal fluid to leak out, a serial killer having sexual fantasies about Sugimoto murdering him in different ways, and multiple characters being eaten by fish and whales. When the season ends with a murder hotel full of trap doors, trick staircases, and sexually frustrated giants, you realize that truly anything can happen in this series. 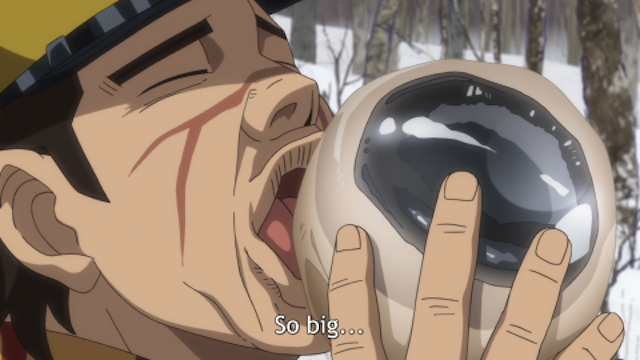 How exactly Golden Kamuy takes all of these absurd elements and blends them into a cohesive whole is a tricky bit of alchemy that's hard to narrow down. Fundamentally, however, it comes down to the appeal of the characters, the righteousness of their mission, and the simplicity of the treasure hunt. Crazy obstacles just seem to make more sense when there's a giant cache of gold hidden at the end. And with the anime is only half over, if you've fallen behind, make sure you catch up for October so you can follow Sugimoto and Asirpa along with us!

What are your favorite elements of Golden Kamuy? What makes it work for you?