I Expected a Cute Anime about a Girl Walking to School, but I Got Chio's School Road Instead!? 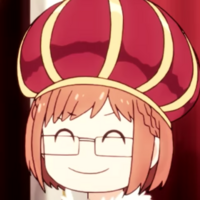 Walking to school is no fun. It’s a mundane hike toward the building in which you’ll spend hours of your day sitting in classrooms wishing you were anywhere else. All you can think about on your way there is the homework that’s sure to pile up before you repeat your routine tomorrow. Peaceful, and boring.

But there’s one girl for whom this experience would be a dream come true: Chio Miyamo. The trek to school is anything but pleasant for this socially awkward high schooler. Every day she’s faced with new obstacles, be they menacing bikers or roadblocks that require her to parkour across rooftops like in Assassin's Creed. Every day is an adrenaline rush to be on time for class or get shamed by her teachers. Chio’s School Road is a chronicle of these misadventures and it’s bound to light up the summer anime season with its absolutely bonkers scenarios.

The trailer above looks extreme, right?? Chio sure doesn’t have it easy. However, what makes the manga this anime is adapted from so great is that these sequences are paired with her oft-panicked inner monologue. To show this, let’s look at a manga chapter in which Chio has a run-in with an aggressive biker.

The tale starts simple and relatable as Chio’s tribulations often do: she stayed up too late playing video games and has chest pain from the exhaustion. We’ve all been there... probably even recently (let’s not talk about it). But things don’t stay normal for long when she comes across a delinquent biker, hair slicked back and sucking on a cigarette. One glance is all it takes to recognize that this guy is bad news.

Ok, it’s all good, relax. Chio tries to calm herself. She tries to slink by him unnoticed, but in typical awkward Chio fashion rubs against his bike’s hot muffler and lets out a yelp. Typical, typical Chio. This prompts an angry response from the biker and an end to any chance of escape.

One thing leads to another and Chio accidentally knocks out the biker with her elbow before he can make his affront physical. And… whoops! She then knocks over his bike by accident (notice a trend?). As her foe wakes, she has but one choice left. Switching to a ruffian pastiche, Chio confronts the biker with mind games and intimidation tactics. We end up at the scene seen in the trailer wherein she sits atop the overturned bike as a wall of fire surrounds her; this series’ penchant for going over-the-top at just the right moment for maximum impact is a big part of what makes it so dang fun. 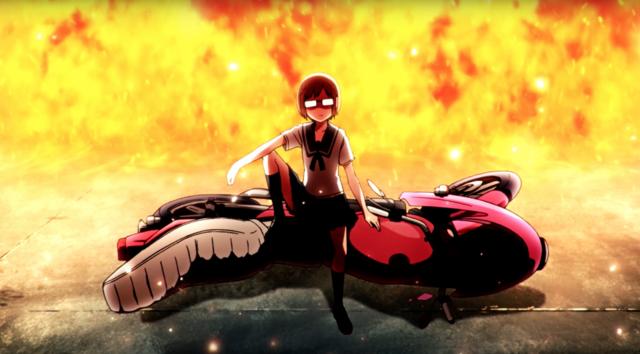 I don’t want to spoil the rest of this scene for you but suffice to say, Chio’s journey to class always fraught with excitement. Emphasis on “fraught,” since this is certainly not the type of excitement she’s look for. But for our viewing pleasure it’s perfect!

Yet it’s not all about extreme action. Like the best comedies, Chio’s School Road keeps one foot squarely planted in the human touch. Chio’s anxious inner monologue – constantly questioning her actions and what others might think – is the emotional core of the series. Much like spring 2018’s HINAMATSURI, the juxtaposition of the inane with the relatable elevates it beyond laughs and thrills. If there’s one reason to watch Chio, it’s because of its heart.

The concept of a series solely focused on a girl’s madcap walks to school is certainly a strange one. That’s why I love it so much, though. It takes a simple base concept and expands it in wildly creative directions that keeps the audience on their toes. Make sure you don’t let Chio’s School Road slip past you when it airs in the upcoming season!