With the next season of anime starting up, let's take a look at some of the best shows of Spring 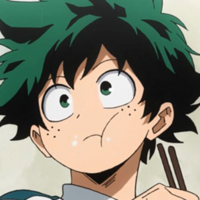 With the spring anime season coming to a close, it’s time to take a look back on the season’s shows and talk about which series gave the best showings. Trying to find something to marathon before the next season starts? Wondering if there were any hidden gems you missed? Never fear! The Crunchyroll Features Editorial Staff is here to share their favorite anime from the Spring 2018 season with you! 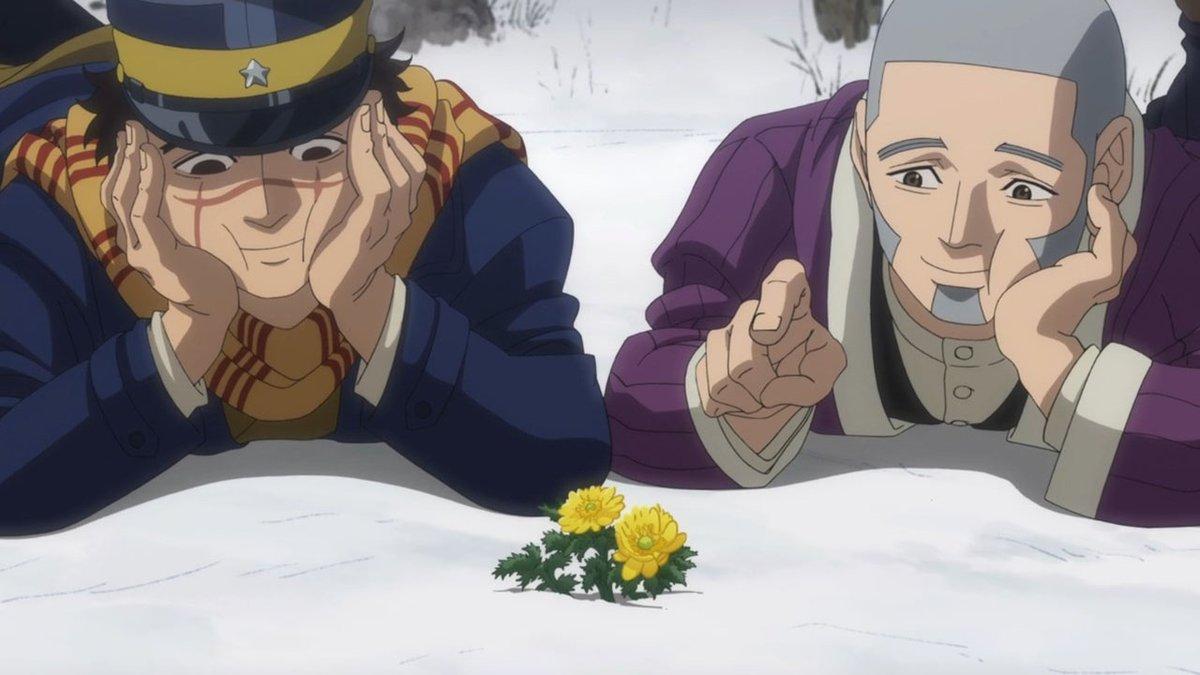 After a weak pair of episodes to start the series, the exposition was out of the way, and thankfully, so were most of the animation issues. While Golden Kamuy is still not a technically impressive series as a work of animation, its insane characters and even more insane scenarios are only matched by the best of JoJo’s Bizarre Adventure. Whether Sugimoto and his merry band are judo fighting in a trap-riddled hotel while the proprietor dreams of consuming eyeballs or joyously eating squirrel chopped up in traditional Ainu fashion, every adventure in Golden Kamuy is unforgettable and an absolute delight. 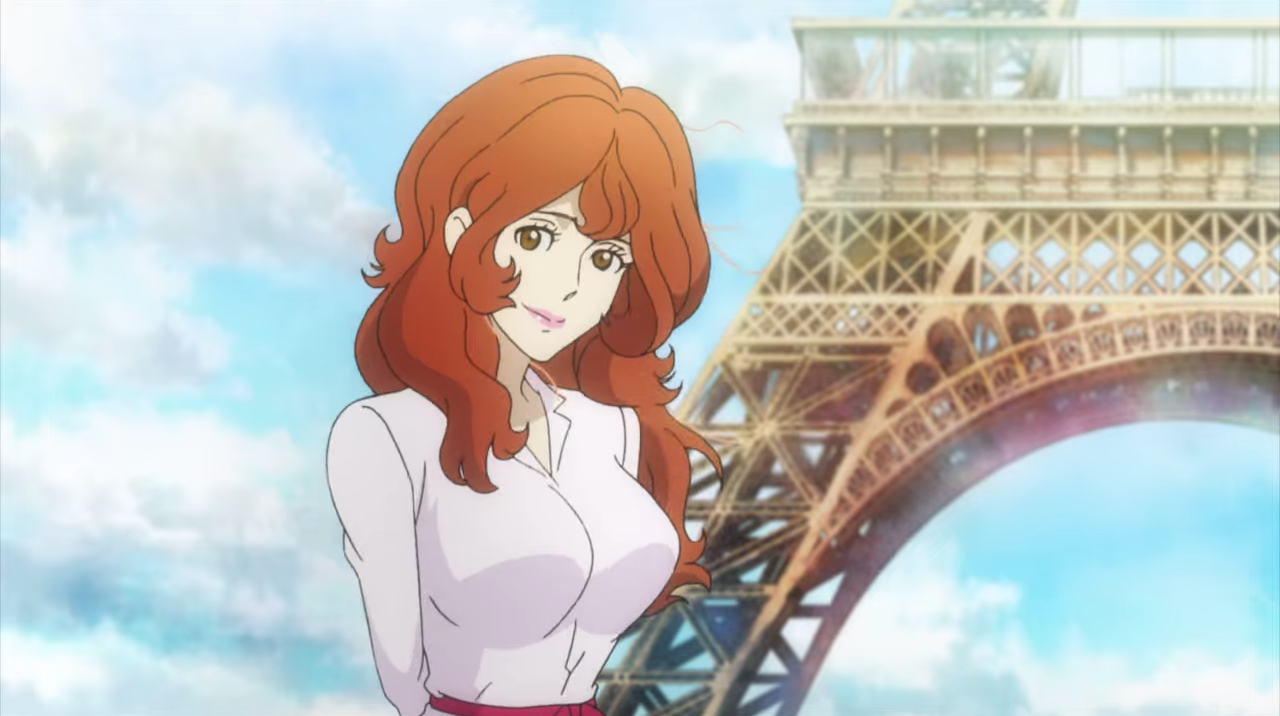 There’s never been a better time to be a Lupin fan: our friends at Discotek are releasing incredible remasters of my favorite Lupin films on Blu-Ray (please do Fuma Conspiracy next!!), the fourth series is airing on US television again for the first time in a decade via Toonami, every Lupin show is available for legal streaming on Crunchyroll, and, most importantly, the best Lupin TV anime of all time is airing new episodes each week!

Lupin’s adventures in France are divided into one of two categories: 5-part “movies” that have so far both been better than the annual TV specials the franchise used to put out between Part 3 and A Woman Named Fujiko Mine and single-episode callbacks to the style and the flavor of particular eras of Lupin’s past. While the latter is certainly hard to judge properly through the fan-service for a Lupin diehard like myself, the mastery of craft on display in the “movies” has given PART5 an identity of its own, and one that’ll be held up for years to come as a blueprint for how to keep the magic of classic franchises relevant.

Overseen by the legendary animator Kazuhide Tomonaga, whose work on the franchise includes some of the most memorable scenes from nearly 50 years of the its history, Lupin has never been better, and it’s worth venturing into the franchise if the gang’s cartoonish antics and 60s-styled caper thrills have ever excited you before. 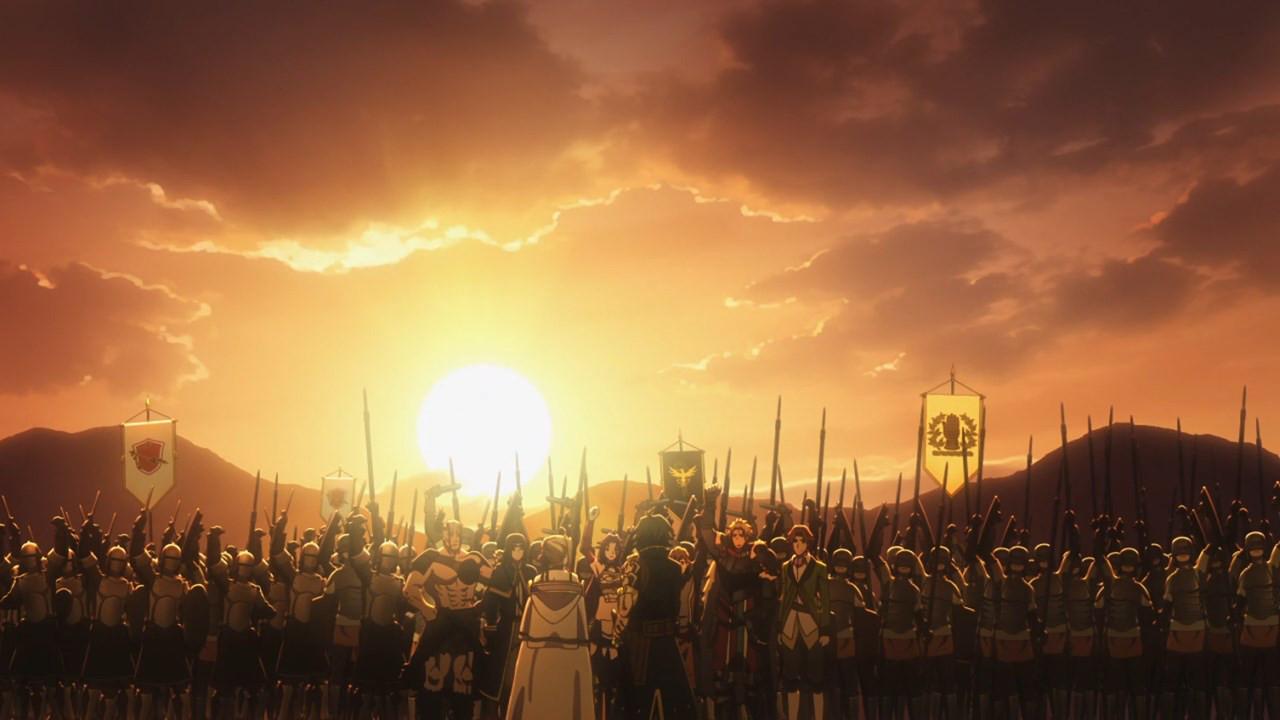 It’s no surprise that Grancrest War reminds me of the beloved 80s and 90s fantasy OVAs that made my heart ache when I discovered there would never be a continuation of the story - the world of Record of Grancrest War, its system of magic, its just-complex-enough egos facing off for valor and for glory, its intricate political machinations - this series is a creation of that era melded with the sensibilities of modern times. The pseudo-European geography and cultures may seem a little quaint, and Grancrest can ultimately feel like a D&D campaign taken to its logical extreme, but maybe that’s exactly why it feels so satisfying. Theo Cornaro’s rise to power and stamp on the constantly-changing world map give immediate gratification for a battle’s efforts, and while they dehumanize the actual foot soldiers of war by focusing on the superhuman abilities of lords, it’s rare and exhilarating to have a series with dozens of large-scale battles that all mean something tangible. With the strength of force behind it from A-1’s top animators, Grancrest War is a marvel for a meat & potatoes fantasy fan like myself. 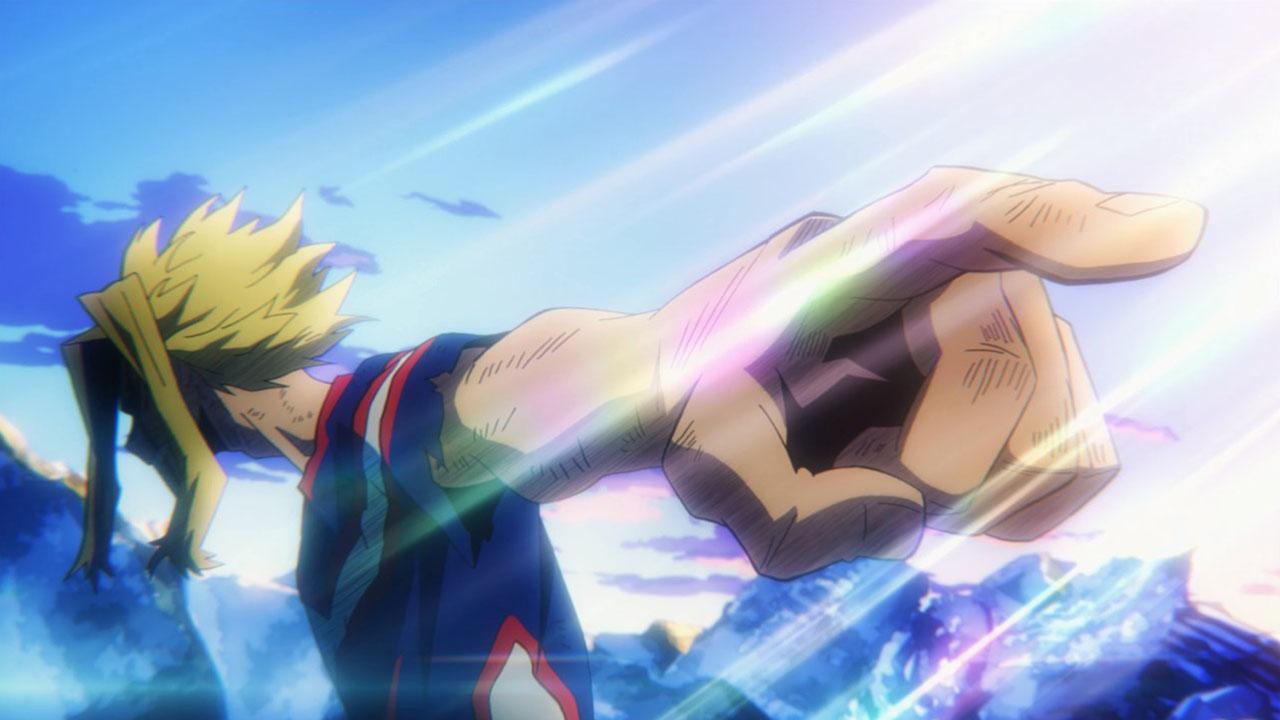 At more than 50 episodes in, My Hero Academia continues to represent the best of what shonen anime has to offer. The League of Villains start the season with a brutal attack on the UA students and things just don’t. Let. Up. Each new arc in MHA one-ups the previous not only in terms of stakes, but also in direction, writing, and animation. The big mid-season battle ended with a beautifully realized moment I won’t spoil here that had massive ramifications for the future of our favorite heroes. MHA Season 3 represents all of the groundwork done in the previous seasons (the precise set-up of character motives, plot points, and worldbuilding) coming to a head. I’ve been a fan of Deku and his journey to become the number one hero from the beginning, and the series has never been better. 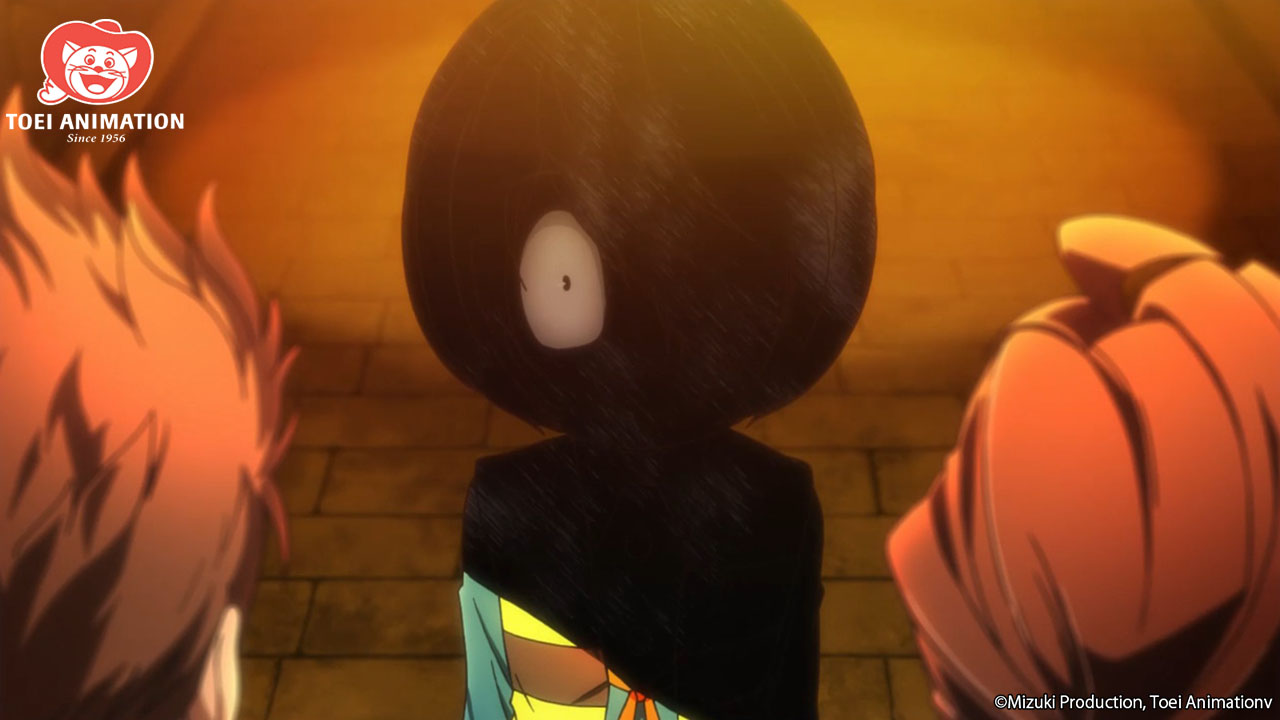 As a kid, I really loved getting scared. I would stay up late watching ghost hunter shows on TV or reading scary stories with a flashlight under the covers. This 2018 update of the spooky manga classic would have hands-down been elementary school Cayla’s favorite show. Kitaro’s misadventures with various yokai (Japanese fokeloric monsters and spirits) use fear as a narrative tool to convey consistently engaging storylines and surprisingly deep themes. While it is a show created for children, the series really respects the intelligence of its audience, it’s seventh episode reaching an impressive level of respect with fans of all ages. 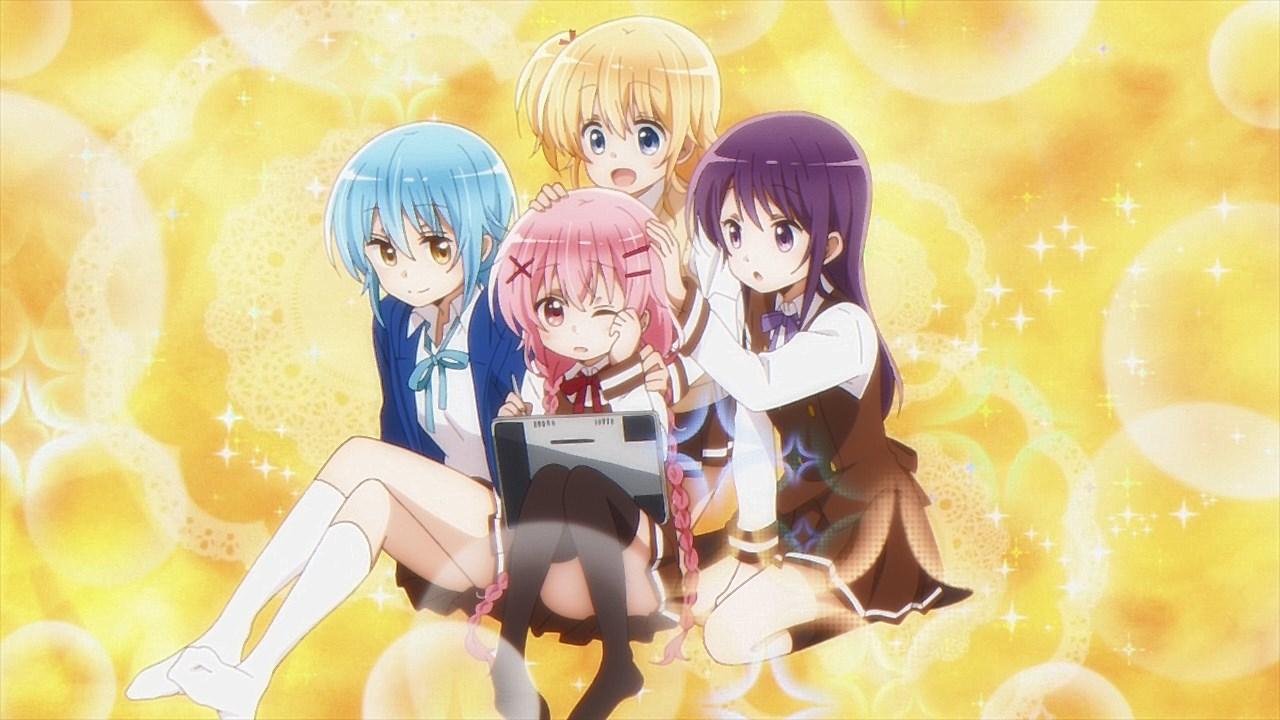 While I love all anime genres equally, there’s nothing quite like finding a really special, well made slice-of-life show. The funny, sincere, character-driven Comic Girls offered a weekly glimpse into the lives of four high school-aged manga authors who are all unfit for normal society in their own special way. The key to a good slice-of-life show is the perfect alchemic balance of the main cast members, and that is pulled off extremely well here. Koyume’s sparkling and oblivious romanticism, Tsu’s aloof shonen delusions, Ruki’s shy and quiet maturity, and Kaos being… just an utter disaster -- all of these traits are expertly balanced against one another and result in really fun, dynamic interactions between all of them! Comic Girls doesn’t do anything revolutionary, but it delivers very well crafted comedy and heartfelt drama in equal measure. 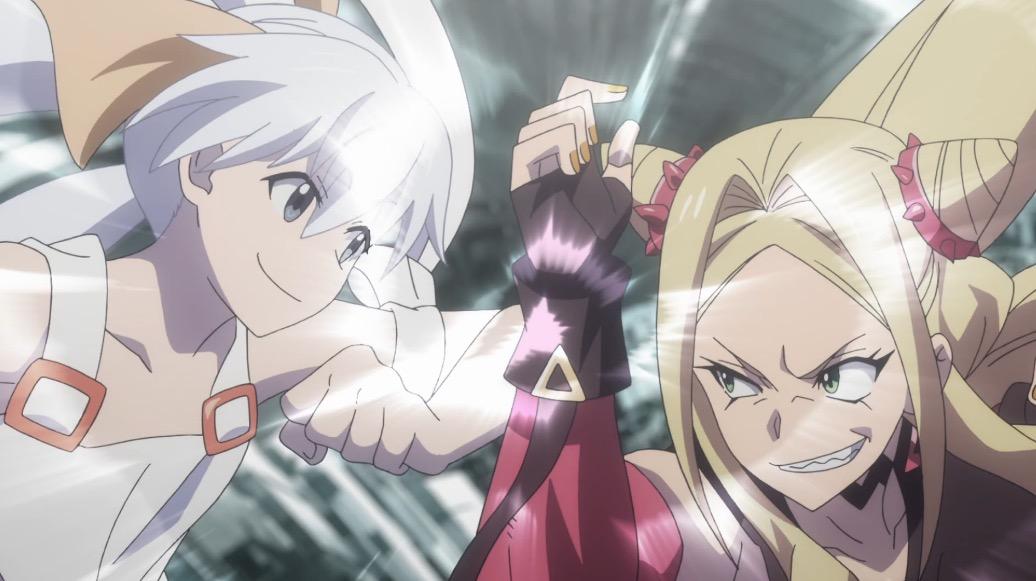 Have you ever decided you weren’t going to watch an anime, only to have your mind unexpectedly changed? That’s what happened to me with Lostorage conflated WIXOSS when the key visual for the series announced that the characters from the original WIXOSS anime would be returning. As a fan of the original WIXOSS, I couldn’t stay away – and, gosh, was I rewarded. Although the Lostorage iteration of the WIXOSS anime is less tense and atmospheric than the original, the sheer pleasure of seeing characters whose stories I thought had concluded on screen once again is almost indescribable. Ruuko, Tama, Yuzuki, Akira… it was so amazing to watch them involved in a new story, bringing all their previous character development with them for one last Battoru! Of course, conflated is not the place to jump in on the WIXOSS wagon since it relies on three previous seasons of build up, but for long-time fans of the franchise, it was something like an unanticipated dream come true. 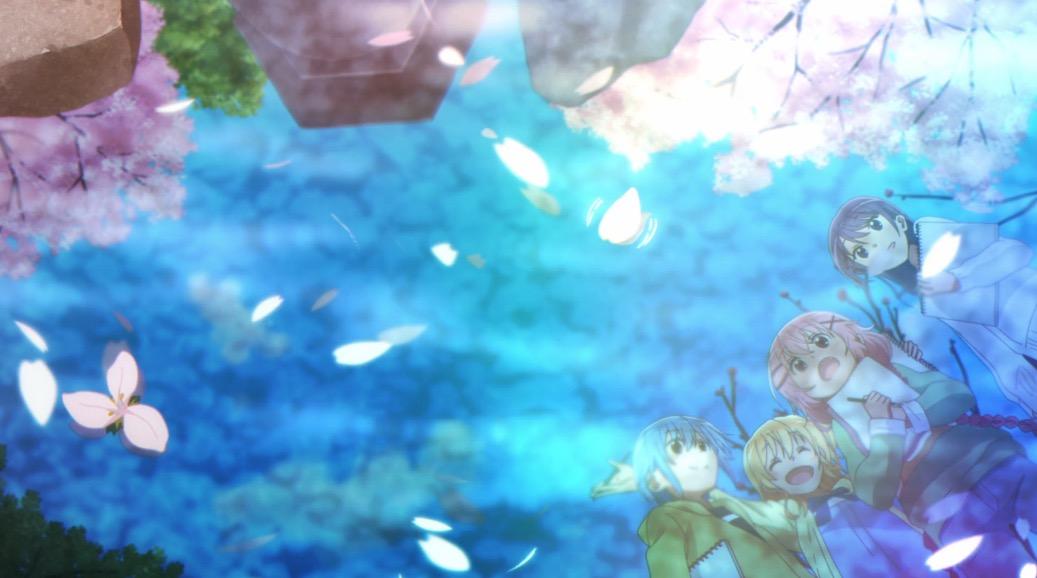 As an art student, watching the trials, tribulations, and triumphs of the aspiring manga artists of Comic Girls sometimes hit a bit too close to home. The struggles of not only Kaos-sensei, but also her companions in the dorms were often intensely relatable and, on occasion, equally inspiring. Of course, it was certainly nice that everything was so cute and fluffy and colorful, but when Comic Girls was at its best, it was digging into the emotional and psychological struggles that most artists face at one time or another. In fact, although Comic Girls is definitely a cute-girls-doing-cute-(this time it’s manga)-things anime, for me it was frequently less a relaxing watch and more a motivation to get back to drawing myself. Let’s both do our best, Kaos-sensei! We’ll be the artists we dream of being eventually! 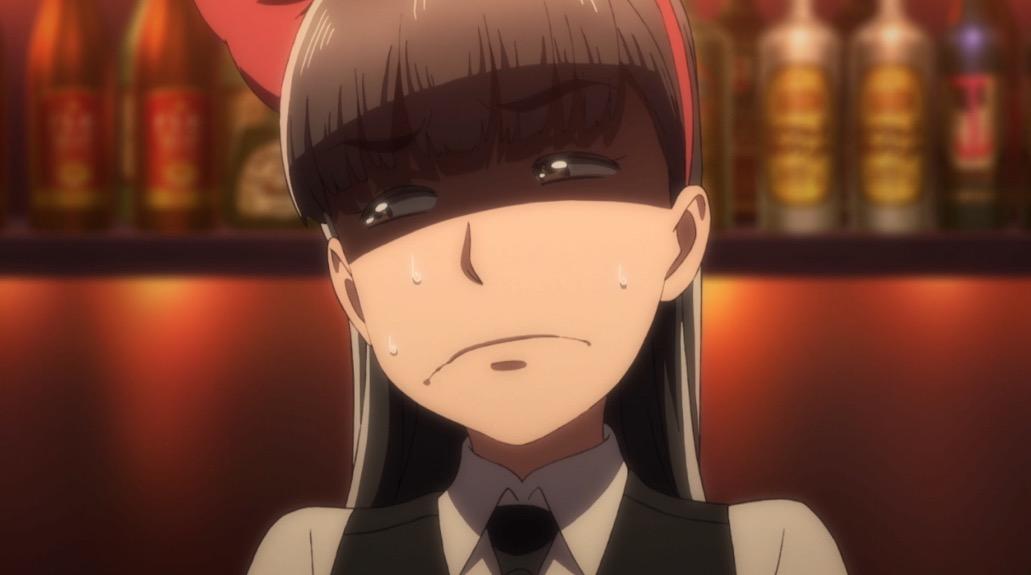 Before the season started, I had very high hopes for HINAMATSURI. Not only had I heard good things about the source manga, but it was also being directed by one of my favorite directors working in anime right now: studio feel.’s Kei Oikawa. Oikawa’s talents had previously won me over through his work onthe second season of My Teen Romantic Comedy SNAFU and, more importantly, This Art Club Has a Problem!, so I was thrilled to see him coming back – and how! Thanks to Oikawa’s talents, HINAMATSURI was both one of the funniest anime of the season with its chipper-sardonic economic humor (not as esoteric as it sounds) AND one of the most heartwarming. How a show can make incredible humor out of a middle school girl calling a crappy adult a “dumbass piece of shit” and also give us Anzu’s consistently tear-jerking story is beyond me, but I sure enjoyed the heck out of it. (Hint: If you can, watch with friends!) 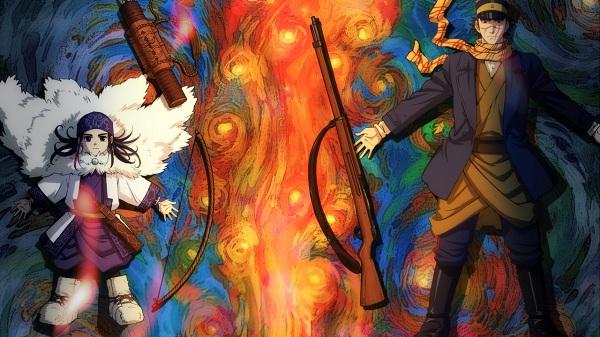 It’s been a long time since I’ve been this excited about a seinen anime getting an adaptation. After reading the manga I was super hyped for Golden Kamuy and it was everything I hoped for and more. Seeing this bizarre treasure hunt/battle royale/historic drama/cooking series come to life has been an amazing experience. There’s just something intangibly great about Golden Kamuy that everyone it touches recognizes but can’t quite articulate. Even the staff relate a similar experience. Certain chapters like the hotel were awesome to see come to life, adding a new dimension to the humor and insanity of the storytelling that make me thankful the anime was made. Golden Kamuy is also the gift that keeps on giving since I can look forward to the second season in Fall and occupy myself playing its awesome OP and ED on repeat for the next three months. 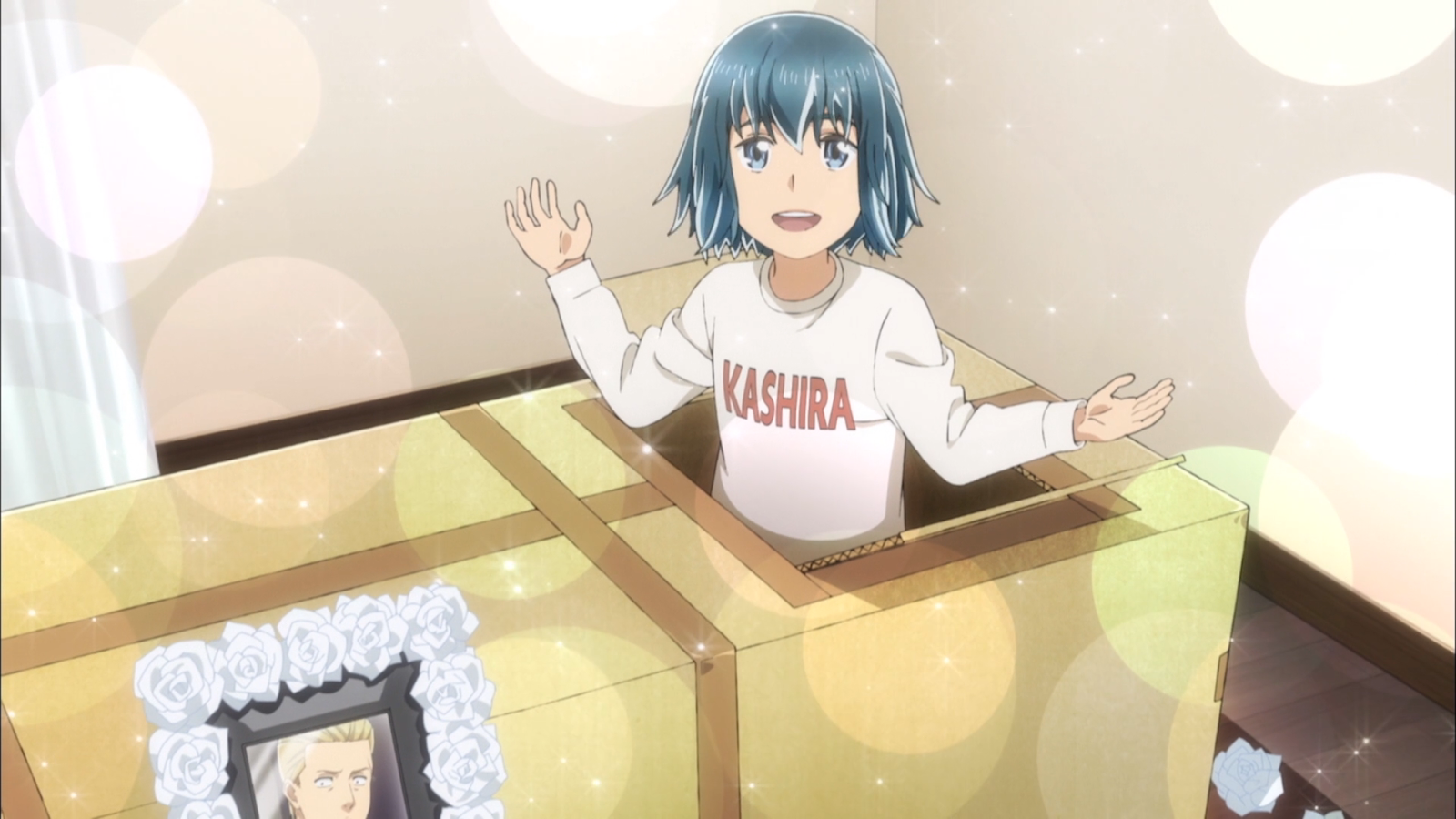 I’d heard some good rumblings about this anime and seen a few glimpses of animation nearly a year before this came out but wasn’t sure quite what to make of it until I watched the first episode and knew it was going to steal the season. Not since Konosuba have I encountered a series with the raw comedic power of HINAMATSURI. The comparison is pretty apt since, rather than isekai, it riffs on the common mysterious psychic girl trope in ways you have to see to believe. This show tackles comedy from so many directions it’s really hard to do it justice. Three (maybe four?) heroines allow for it to bounce around different tones from tongue-in-cheek to truly touching while making you laugh until you’re in danger of suffocating. Even the production values are quality, with some character, action, and effects animation that go way beyond what the scenes called for. 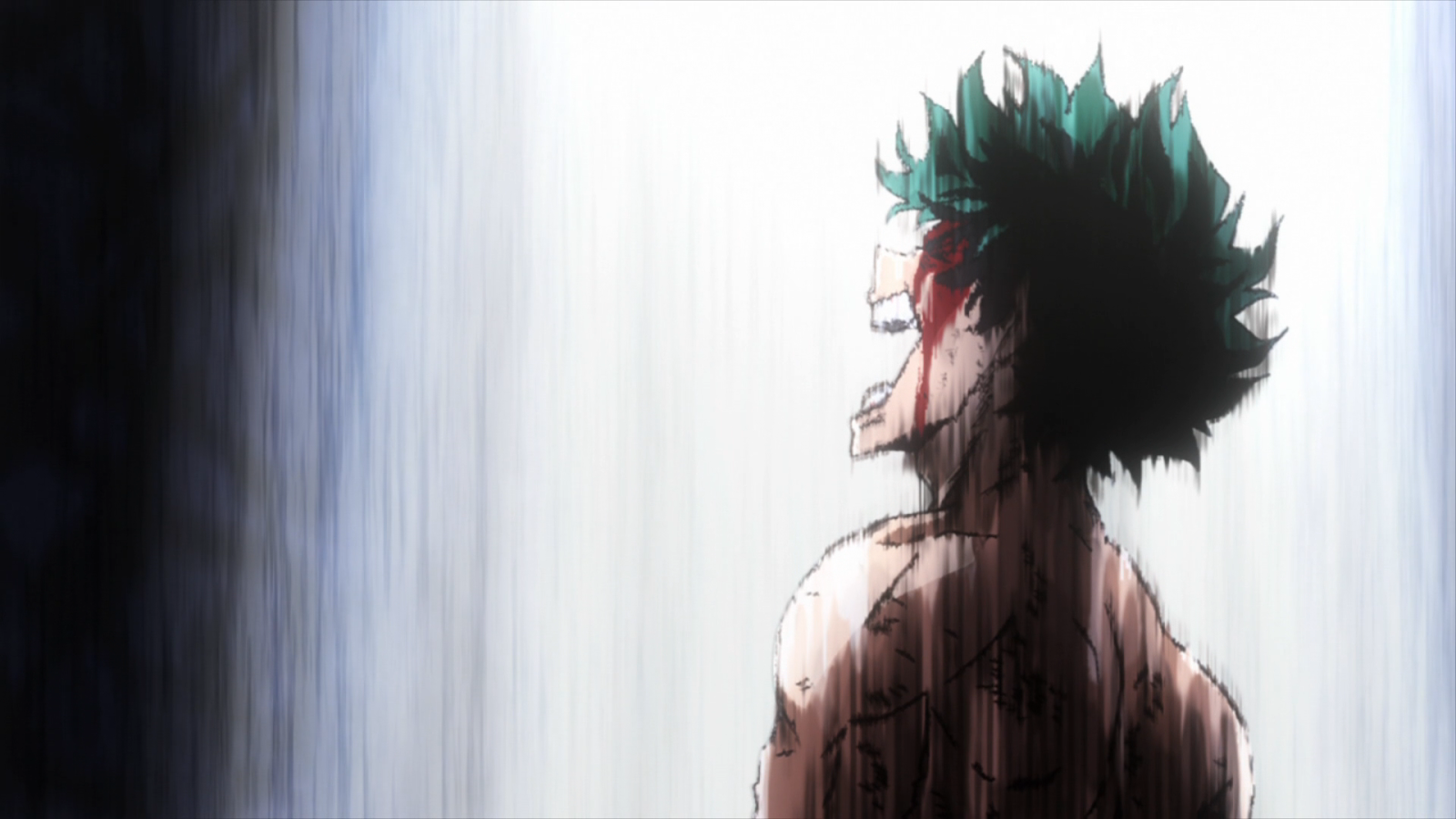 It’s hard to believe we’re only 12 episode into the third season. It feels like 400 years have passed since the show started back up. More has happened in this stretch than maybe the entire series leading up to it with the entire power structure of the world being rocked and setting things up for the next great conflict. This season had two of the series’ finestmoments and one scene that's going to become a new benchmark for quality in the shonen fandom, cementing MHA’s legacy. I can’t talk this series up enough. Even talking about its highs doesn’t really do justice to the thousands of smaller moments that build the foundation for this series. If you’re not watching it, you’ve made a terrible mistake, but it’s not too late! BONES has done a brilliant job adapting the series and there’s only more to look forward to!

What were your favorite series of Spring? Be sure to let us know in the comments below, and we'll see you at the end of next season with our Summer picks!