Shining the Sports Spotlight on Girls in Hanebado!

Hanebado takes the stage this summer in allowing girls to not just be competitive, but fierce 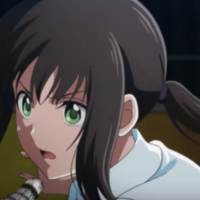 Sports anime: we love it, we can’t get enough of it. For those of us to play or have participated in sports, and even for those of us who haven’t, the struggles shown in sports anime resonate deeply with us. The talented but somewhat distanced protagonist, a cast of people who genuinely love what they do, the hard work and desire to be better; these are all things that make the story richer. We want to cheer the main team along, we might even cheer along their rivals if they’re written to be sympathetic and quirky, we want to see these boys live out the sports dreams of their high school life. Yes, those boys. So what about the girls? Where are the girls?

In traditional mainstream sports anime and manga, most of the time it’s centered around boys. As the protagonists and the main team, they are the ones who carry the plot, and so the story revolves around them. Competitions aren’t co-ed, so the girls aren’t shown playing the same sport, so they instead play a side role. They’re managers or girlfriends, someone meant to support the team, or provide important expository information during the competition. As not the focus, they’re rarely even given the role of major supporting characters. Instead, they are relegated to the background to be emotional support, to be hopeful during a time of crisis; to be cheerleaders. They’re rarely whole beings with character arcs— but instead stay as cute faces to cheer those on who are truly doing those sports.

When girls do get the spotlight, even that’s a mixed feeling because the majority of what ends up being showcased is more of a “soft” type of sports. In a good chunk of anime and manga depicting girls in sports, there’s a large focus on how cute the girls can be. They’re meant to be appealing to the audience over being deep or sympathetic, so even in the middle of harsh physical activity, they’re sweet and soft. This ends up feeling somewhat abstract, as the first impressions while watching sports tend to not be on how cute the players are, but on their performances. That isn’t to say that these types of stories can’t be entertaining, but they rarely feel like sports. Rarely are you focused on being cute when you have a competition to win. It’s also important to note that male-centric stories don’t have this paradox— it’s only when women take the lead.

Hanebado doesn’t fall into these traps. It starts out moderately cute, but quickly evolves into the core of sports anime: drama and intensity. The Kitako City badminton club is failing at the start, with many people resigning from the club. They can’t go into competitions if they’re short on members, plain and simple. Their captain, Aragaki, is suffering from having her confidence shaken by losing a match to someone younger than her. The club needs to be revitalized and find more talent. Hope comes in the form of a newcomer Ayano, who is surprisingly resistant to the idea of joining the club, even with her wild talent in badminton. The need to get this newcomer into the club in order to succeed becomes a necessity, and thus begins the journey.

The girls of Hanebado aren’t there to be cute, they’re there to win. Badminton is an exhausting sport, and the girls don’t shy away from going as hard as they can. They’re ambitious, they’re ruthless, they’re driven, and they’re not punished for it. They may have their comedic moments outside of the club, but they show no mercy once they’re on the court. In other words, they’re allowed the full spectrum of emotion, including ones that aren’t necessarily appealing. Allowing female characters to be complicated is a rarity, but one that’s wholeheartedly welcomed.

It’s not as if there are only women in the story. There are boys in the main cast, but the tides have reversed. The most prominent male character is the badminton club’s coach, Tachibana. He may kickstart certain events in the story, but he’s by no mean the main character. The ones who carry the plot, who grow and hone their talents and become fiercer for it are the girls. It's their story.

Hanebado is not the first of its kind. There are absolutely a number of engaging stories featuring girls in sports, where they are allowed to be full characters while fulfilling the usual sports anime story arcs. At the same time, these stories aren’t numerous by any means; there’s only a handful that fit this criteria. We need more stories like this, and so Hanebado will be a gracious addition to sports anime that we greatly need.