Interview - Diving into the World of Fire Pro Wrestling with Tomoyuki Matsumoto! 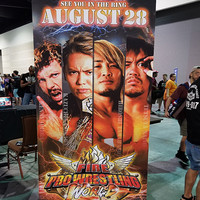 CEO 2018 was this past weekend, and what an amazing event it was! Combining fighting game action with even a live NJPW show, CEO 2018 was a whirlwind of activity! While I was there, I had the honor to interview the director of the newest Fire Pro Wrestling game, Tomoyuki Matsumoto, about the upcoming console release of Spike Chunsoft’s newest incarnation, Fire Pro Wrestling World. Fire Pro Wrestling is a storied wrestling series that combines strategic battling with nearly endless customization, and Fire Pro Wrestling World’s release on Steam has already been a big hit. With the game coming to PS4 in physical and digital options, it seemed like a great time to get some insight from the man behind the scenes. 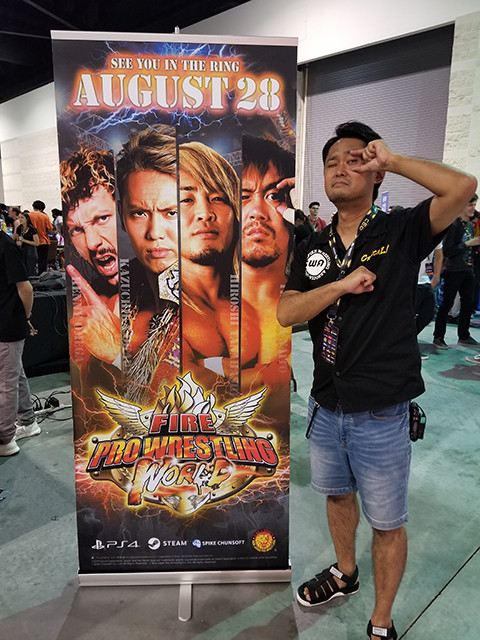 Please tell us about yourself and how you became involved in directing Fire Pro Wrestling World.Originally, I joined the gaming industry to work on Fire Pro Wrestling. That was 20 years ago. The series then had a long hiatus that lasted about 12 years, so I’ve been trying to bring it back ever since. Because of the success we’ve been having on Steam with other titles, I was able to use that momentum to convince the executives that this would be a good time to bring back Fire Pro Wrestling.

The Fire Pro series is famous for it's amazing amount of customization. What's your favorite feature?Of course, making custom wrestlers is fun, but what I really enjoy is to go deep into the CPU logic where you can set different priorities for different moves to see how the wrestlers react, and then pit the CPU wrestlers versus each other and simulate CPU matches.

The Fire Pro Wrestling games have had a unique timing and strategy based fighting style over arcade action. What was your thinking on bringing that style back for Fire Pro Wrestling World?I guess the reason we didn’t make any changes to the game’s presentation is because Fire Pro Wrestling is Fire Pro Wrestling! If we were to change or modify it, we felt it would become a completely different game, so we kinda left it the way it’s been for all these years. It’s a series hallmark that the game doesn’t have an UI in a match, and that you have to watch the wrestlers closely for signs, like seeing how tired they are. The fact that there's no life gauges like in a fighting game, where you can see how much you’ve got left and you start thinking “I’ve only got a sliver of life left and I’m gonna get chipped out”, but in Fire Pro, it’s not over until it’s over! It creates this environment where you want to keep trying your best. 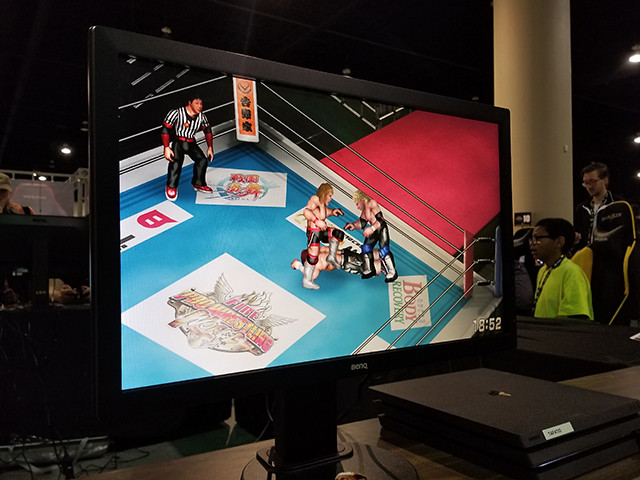 What can you tell us about the Story Mode in Fire Pro Wrestling World? Basically, in the game, you’re a young hopeful who wants to become a pro wrestler. The game opens and you’re in an audition for new wrestlers. Your character starts off as a literal nobody, a basic default template wrestler. If you do well in the audition, they’ll let you join and you’ll come in as a “Young Lion”. After a certain point, you’ll be able to join one of their teams or stables depending on what kind of wrestler you build and your alignment. You’ll start off with very basic moves, but if you play more matches, you can unlock more moves depending on how you train and your playstyle.Game progression works like this: there’s a story scenario, then there’s a match and based on the results of the match, you’ll receive training points that you can use in the gym to boost parameters and skills. In addition to customizing your looks, you can also customize your strengths and weaknesses. The first wrestler you face is a super jobber type with really low stats and moves slowly and doesn’t have any exciting moves, sort of like a blank slate wrestler that you fight against to gain training points. As you face tougher opponents, you’ll gain a bigger amount of training points.The goal in the game’s story mode is that you want to become the next IWGP Heavyweight Champion. You follow the basic Young Lion path, where you start training in the dojo, and after a certain point they’ll send you on an excursion abroad to America to train with a stable to make a name for yourself there. Then when you come back to Japan, you can join whatever stable suits what kind of wrestler you’ve built and move your way up in the ranks through matches.

This is the first Fire Pro Wrestling game to include online multiplayer functionality. What influenced your decision on this?Japan, in particular, lost its couch co-op culture, so what easier way to bring people together than to go online, make a room and invite your friends for a few games, making it a sort of a “virtual” couch.

Can you tell us a bit about the physical release of the game in the US? Many publishers have tended towards digital only, so it's exciting to see such a nice edition get announced!Last December, we established our US branch office, and that allowed us to publish physical versions of our games. If you’re an old school Spike Chunsoft fan, you might know that we had one prior release that we did ourselves; it was One Way Heroics! Because we didn’t have a physical company in America, we couldn’t release physical versions of our games, so we had to do One Way Heroics through Limited Run Games. Originally, we were thinking of doing something similar with Fire Pro Wrestling, but now that we have our own US branch office we can do everything officially and get the game in stores like Amazon. The first printing will be limited; it’ll be a “day one edition” that’ll come with a NJPW almanac that lists all the characters in the game with their stats and ideas for strategies to use in the game.The Fire Pro Wrestling games were originally released on a console, so while it came out for early access on Steam due to how the business scheme works, we’re really happy to be able to bring the series back to console. 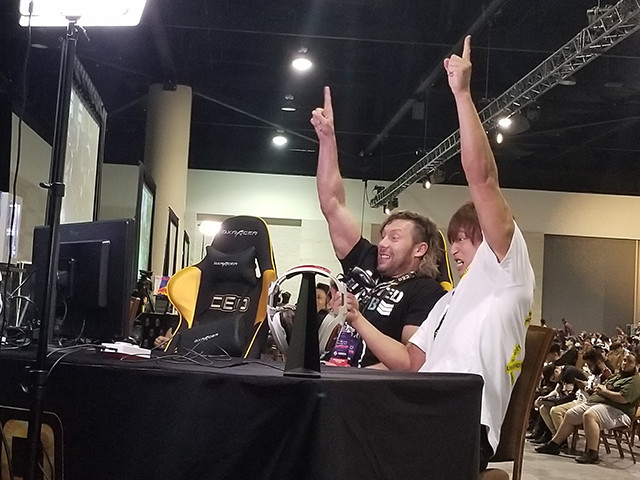 Can you tell us a bit about the partnership with NJPW came to be? It's exciting to see the wrestlers in game, and see them compete in real life for the Fire Pro Wrestling championship belt!It’s a surprisingly simple story! One of our friends works for NJPW, and he was like “Matsumoto, you wanna do something together?” (laughs)In the Steam version, you know there’s the “bootleg” version of professional wrestlers, where it looks like a particular wrestler, but we don’t have the license to officially put them in the game. Because of how the culture has changed over the years since the last Fire Pro Wrestling game was out, we figured it’d be best to not have recognizable wrestlers, so the Steam version only had SWA, the stock wrestlers that we created. And because of that, because we didn’t have any “real” wrestlers in the game, it made it easier to work with NJPW.

Are you a wrestling fan yourself? Who is your favorite wrestler, and do you have any Dream Matches you like to create in Fire Pro Wrestling World?(Answers immediately) Naito-san! (laughs) We’ve got 39 of the NJPW wrestlers in the game and we’re using their real voices, so we had studio sessions with all of them. I had to be professional and very business-like about it, but Naito is the one guy that I asked his autograph for! As for dream matches… that’s a hard question! We have the NJPW license, which is awesome, but it would be great if we could have WWE wrestlers and DDT wrestlers or the ROH guys in the game. I wish we could have EVERYTHING in the game so we could create literally any kind of match!

Finally, is there anything you would like people to know about Fire Pro Wrestling World as it gets ready for release later this year on the PS4?Fire Pro Wrestling World was made for the fans by the fans, a big reason why this series is back was because we had a lot of old school support and that kinda gave us the ammunition that we needed to convince the executives that it’d be a good idea to bring it back. The PS4 release of Fire Pro Wrestling World will have the NJPW wrestlers and scenario mode in by default and for Steam, those will be released as DLC. For the Steam version, we’re making a few improvements to the game with some UI overhaul, which will be available on Steam on August 28th. As far as future plans, it’s been announced in Japan that we’re doing a season pass with additional DLC and one of those will be the Promoter Mode, which we planned to release when the Steam version initially released, but we had to switch tracks with work being done for the PS4 version of Fire Pro Wrestling World, so that has been on the backburner. Once the PS4 version of the game is ready, we can go on to work on the additional material that we had wanted to do. So in Japan, it was announced that we will be doing the Promoter mode and two other pieces of DLC that will get announced with further details. We haven’t yet announced the DLC for the West, but it is coming! 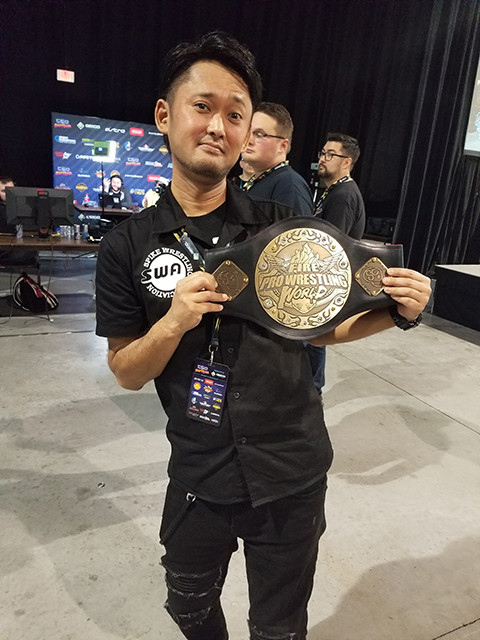 Thank you so much Matsumoto-san! Fire Pro Wrestling World is already out on Steam, and is scheduled to hit PS4 in August 28th of this year, so if you’re interested in it, go check it out and snag that cool NJPW first print edition! As for me, I’m starting to plan out all of those grudge matches I want to see settled!

Excited to check out Fire Pro World? Who would you pit against each other? Let us know in the comments!

INTERVIEW: Hiroyuki Sawano on the Music of Fanfare of Adolescence