Two Heads Are Better Than One: Anime's Best Mecha Co-Pilots

The strongest mechs require two people at the controls! 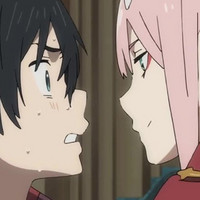 Ah, mecha. There’s nothing quite like watching giant robots beat the not-so-living nuts and bolts out of each other, or protect the world from some kind of impending onslaught of giant monsters. It’s impossible not to be teetering on the edge of your seat when the pilot suits up and hops into the cockpit. Maybe your brand of mecha is more realistic, with the pilot following proper protocol to launch. Perhaps your favourite flavour of mecha is all in the showmanship, where all it takes to boot it up is passion and an over-the-top transformation sequence. 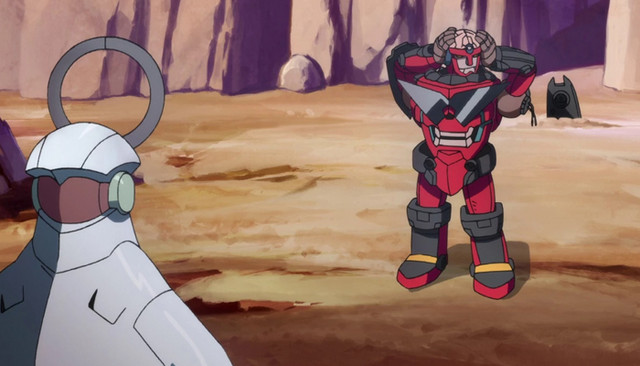 The most recent pilots to join the ranks of dual-piloted mecha are Darling in the Franxx’s Hiro and Zero Two. In place of any sort of petrol or fuel, the Strelizia seems to run purely on their devotion to one another. 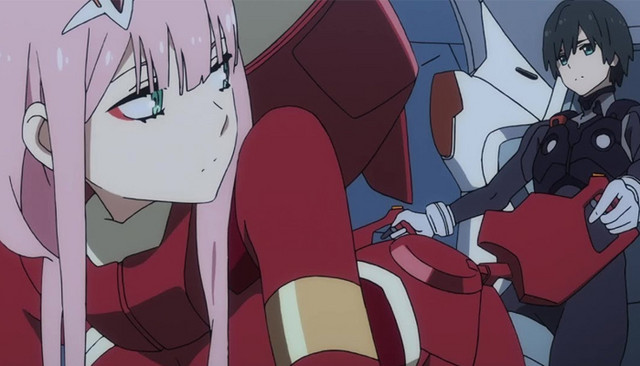 Well, maybe not just devotion, but it certainly starts there. Since the Franxx need both a pistil and a stamen to function properly, their love for each other only serves as a positive force against the Klaxosaur, and later VIRM. Despite warnings from every which way, Hiro and Zero Two revel in the fact that their union will bring about the change the world needs.

With the show soon coming to a close, the bond between Hiro and Zero Two will either prove to be a catalyst in rejuvenating the world, or quite possibly the opposite. Only time will tell.

Renton and Eureka might just be one of the most well-known of all dual-piloted mecha. After crashing at Renton’s granddad’s garage, Renton fell head over heels for her, even going as far as to risk his life to give her the Amita Drive. 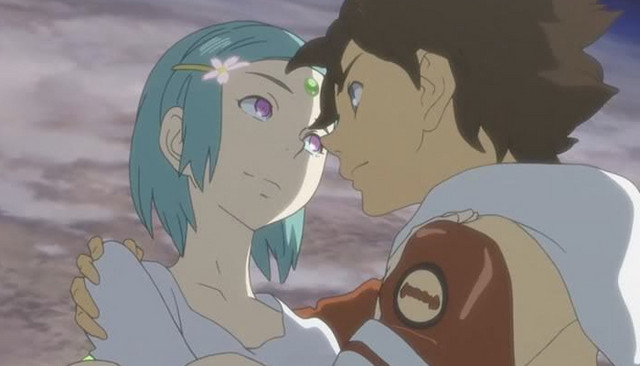 While his confession of love was completely foreign to her, she at least found it impossible not to note his bravery. She also found herself particularly impressed by his skill in co-piloting the Nirvash as if it just came naturally. She felt like she really found the right partner for the Nirvash.

Eventually some jealousy over who their Nirvash preferred led Eureka to distrust and pull away from Renton. Though she soon enough finds that she misses him greatly - as does the Nirvash - and the two reconcile and confess their feelings. From there, the two fight their way against anything that gets in the Gekkostate’s way.

Sometimes, piloting a mecha requires going beyond the impossible and kicking reason to the curb. While the titular Gurren Lagann was initially two smaller Gunmen, it wasn’t until their fight with Viral that Kamina came to the conclusion that the key to victory wasn’t power or strategy. It's not even manly spirit, confidence or brotherhood. It was two heads. 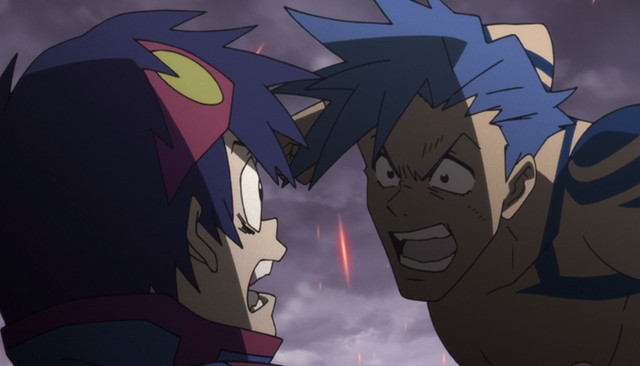 Without hesitation, Kamina jams the Lagann into the Gurren - to initially hilarious results. However, the mass of spiral energy between these two brothers brought the two stolen mecha together to form one Beastman ass-kicking machine.

After a certain even that some of us like to pretend never happened, Simon piloted the Gurren Lagann with a number of other characters, such as Rossiu, Yoko, and even their arch-nemesis Viral to defeat the Anti-Spiral’s Granzeboma. Suffice to say, if any anime could prove two heads are better than one, it’s it’s Gurren Lagann.

Questionable age difference aside, Goh and Anna’s relationship is one plagued by alien invasions. They initially met while battling the Mimesis, and had their wedding completely ruined when the Mimesis came to strike again. Fortunately, Anna’s wifely devotion lead her to find the Neo-Okusaer - a top secret robot she uses to save her beloved. 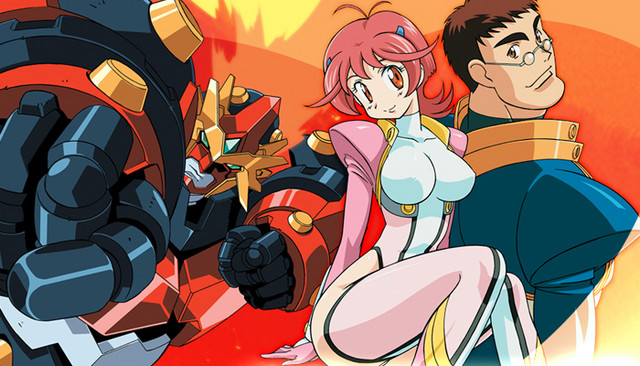 Fortunately, the “two become one” allegory of marriage seems to extend to fighting aliens with giant robots. Anna merges her Neo-Okusaer with Goh’s Dannar, activating it’s Twin Drive to form the mighty Godannar!

Despite the gratuitous fanservice, Goh never seems to have eyes for anyone but Anna. I guess the key to a good marriage (or good mecha) isn’t attraction. It’s gattai.

The concept of dual-piloted mecha dates as far back as the 1970s with Groizer X. This old school mecha anime follows Joe and Rita as they pilot the titular Groizer X in an effort to fight off the Gaira invasion. 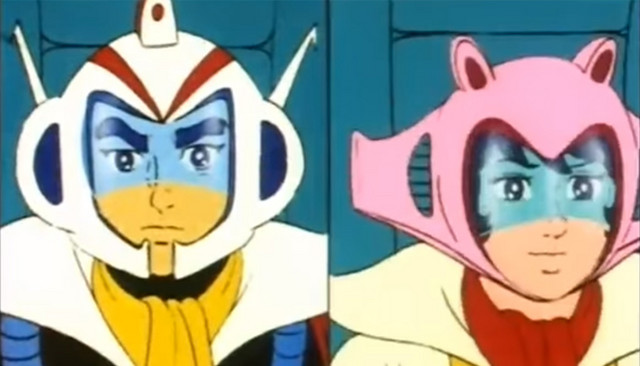 After Dr. Yan was captured by the Gaira, who bided their time in the Arctic before enacting their invasion, he created Groizer X, and entrusted it to his daughter Rita. When Groizer X escapes the grasp of the Gaira, it makes a beeline for Japan, where Rita meets Joe. Without hesitation, Joe agrees to help her fight off the Gaira, and the two become an unstoppable force.

Groizer X was created by Go Nagai, and received a 36-episode anime despite Nagai being busy with Mazinger. Brazilian anime fans might be familiar with Groizer X under the name O Pirata do Espaço, while Latin American fanatics might know it as El Justiciero.

You can always count on Gainax for their ability to gather around the meeting room and say “you know what this mecha anime needs? Mecha that combine with other mecha!” This 1980s fan favourite paved the way for over the top mecha badassery we’ve come to love and expect from them. 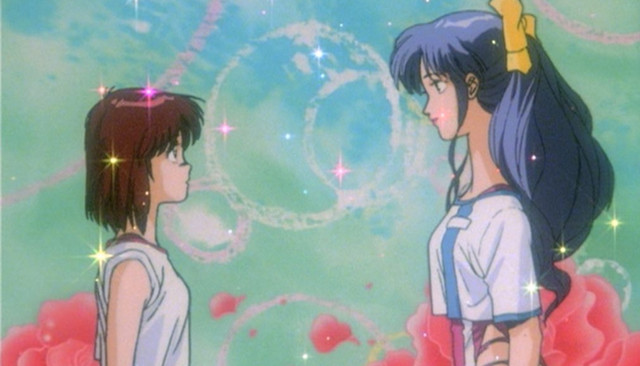 Gunbuster follows Noriko’s journey to follow in her father’s footsteps to become a space pilot. She’s eventually handpicked as someone with the potential for greatness, and must prove to everyone that she can be the pilot she yearns to be even if she’s just an ordinary girl. Along the way, she meets Kazumi, an upperclassman with whom she becomes enamoured with. Fortunately, Kazumi is one of many who believes in Noriko, which aides in their fight against the space monsters.

Fun bit of trivia: Gunbuster was Evangelion auteur Hideaki Anno’s directorial debut. You can certainly see some of his directorial flair in it. 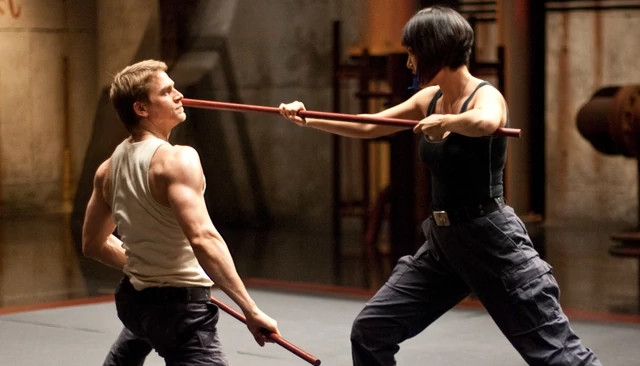 You go ahead and tell me Pacific Rim isn't just a real life anime. Go ahead. I'll wait. This 2013 Guillermo del Toro picture featured a number of nods to various Japanese media such as anime, mecha, and kaiju films. There's no better director that could pay homage to these genres than del Toro. The man himself has some of the greatest taste in anime and manga, recently showing off his own collection, much of which included manga from the likes of Junji Ito and Osamu Tezuka.

Pacific Rim takes us through a world ravaged by Kaiju, the likes of which are fought off by Earth's last hope: the Jaegers. The Jaegers require two pilots, joined through a mental link known as a drift. The stronger the sync between the two pilots, the better chance humanity has at saving the world.

While Raleigh and Mako's first drift in their Gypsy Danger saw the destruction of the Shatterdome, they eventually rose to becoming the last ditch effort humanity could depend on.

Zach Godin writes about the manga he reads and collects over at his website, Rusted Culture. Feel free to say hi on Twitter: @zachjgodin