A Sneak Peek of Colorful Action in the World Premiere of TRIGGER's SSSS.GRIDMAN! 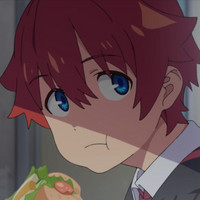 TRIGGER was at the top of their game at the 2018 Anime Expo, showing off some early concept artwork (pictures were prohibited) from DARLING in the FRANXX, a sneak peek at the opening animation collaboration with Titmouse for Indivisible and exclusive PV of Promare. They capped things off with the world premiere of episode one of their upcoming Fall anime SSSS.GRIDMAN, TRIGGER’s take on the 1993 tokusatsu classic which also references the American adaptation Superhuman Samurai Syber Squad. It’s TRIGGER and giant (not quite) robots so I couldn’t possibly pass it up.

A boy awakens on a couch in a strange apartment with no memory of where… or who.. he is. A nearby girl tells him that he collapsed and she took him to her place. She asks him if he remembers what happened between them and, together, the two discover he has amnesia. Her name is Rikka and she tells him his name is Yuta. Rikka’s family owns second-hand electronics store. In one of the old computers, Yuta sees a robotic face that tells him to remember his calling before Rikka takes him outside to visit the hospital and he spots the silhouette of a massive monster standing over the city.

Gridman is a strange combination of old and new, opening shots of barren, urban sprawl accompanied by the sound of cicadas reminiscent of ‘90s sci-fi like Neon Genesis Evangelion, likely an intentional decision given Yuta’s first perspective, staring at an unfamiliar ceiling with a square light. Meanwhile the characters are much more modern, with a primary cast of color-coded character designs. Amemiya stated the series will focus on kid’s relationship with technology and the focus seems to be between old and new as the cast uses news cell phones in an city that’s beginning to show its age. 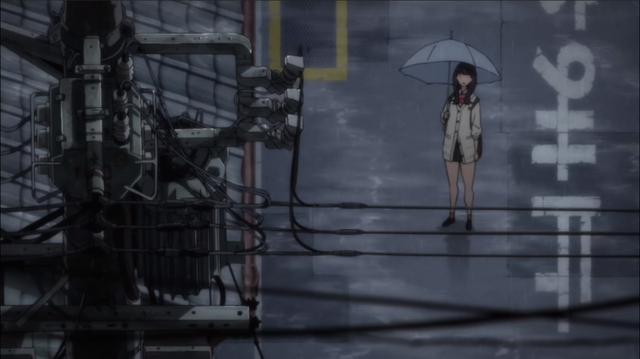 Yuta discovers that, just like the robot, no one else seems to be able to see the giant monster. He reports back to Rikka that the hospital told him his amnesia isn’t dangerous and likely to resolve itself (really?) so she directs him back to his house where he discovers his parents are both abroad on business. On his way to school the next day he meets a boy who claims to be his friend named Utsumi. Yuta discovers during class that he and Rikka are basically strangers and finds some unexpected compassion from an unusual girl named Akane. His more mundane problems are put on hold when the monster that has, until now, remained immobile, has begun to rampage through the city.

Gridman doesn’t move much like we’ve come to expect from TRIGGER anime, sticking closer to the more organic character animation of Kiznaiver or DARLING in the FRANXX than Imaishi’s dynamic style. Although bits of personality come through with small moments like an argument between Yuta and Rikka where they jump from pose to pose with no in-between which I’m... pretty sure was a stylistic choice. 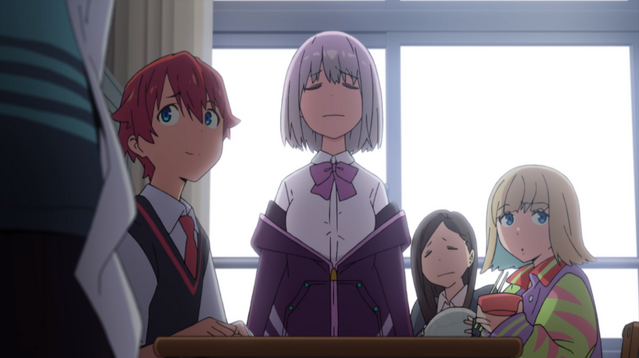 Remembering the words of the computer robot, Yuta returns and gets sucked into the computer at her shop to become a giant tokusatsu robot that does battle with the surprisingly cartoon looking monster. This is when the CG comes out. Amemiya discussed using a hybrid of 2D and 3D animation for the series and, while the fight was fine in its 3D animation form, the separation of hybrid from pure 3D might better show itself in later episodes. One really impressive visual I did notice was the hundreds of moving reflections of Gridman in every window of a building he was passing by which I honestly can’t think of ever spotting in a series before.

Yuta eventually defeats the monster, but only with the help of Rikka and Utsumi back in the shop figuring out the monsters weakness and that they can communicate with him by typing messages into the computer. The set-up with the old computer and the kids needing to put their heads together to beat the monster felt like a throwback, providing a nice sense of nostalgia with some modern elements that prevented it from feeling dated. As with the old computer, Gridman appears to be trying to have fun with old conventions. 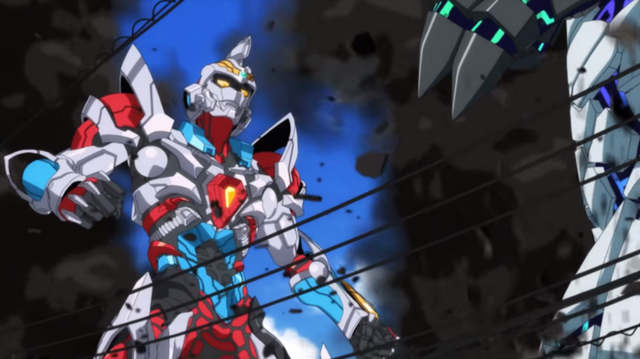 The finale felt dramatic despite the campy elements with an added extra credit that said a lot about the tone. During the course of the battle the monster had destroyed their school where Rikka’s friend Bandai had stayed behind, but the next morning they discover it rebuilt, leaving you to wonder if Bandai was also saved from her tragic fate. I’m curious about what TRIGGER will be able to do with this unique space, a more grounded setting inspired by the tail end of the media that many of their heads draw from and likely not plunging as deeply into the social themes as their other more realistic works. If nothing else, TRIGGER is great at stirring up interest. I’m definitely looking forward to Gridman’s October premiere.