5 Anime Worth Watching for That One Scene

Because sometimes a whole series is worth watching for those defining moments. 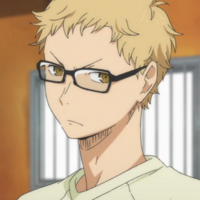 There are many "wham! moments" in anime – where things finally get real, or where something important truly comes to light. The reason why Victor’s so attached to Yuri in Yuri!!! on ICE, or Utena pushing aside Akio and ripping open the stone coffin with her bare hands in Revolutionary Girl Utena are some examples that come to mind. Some moments are truly worth the whole anime.

In fact, some moments in extremely popular series are so memorable that everyone knows them, even those who haven't sat down to watch the actual show. But we're not here to list those moments. Instead, we're going to tackle some lesser-known moments that still deserve to be noted, either for how spectacular or impactful they were. They might not have been from smash hits, but they were definitely, without a doubt, scenes that justified their shows. 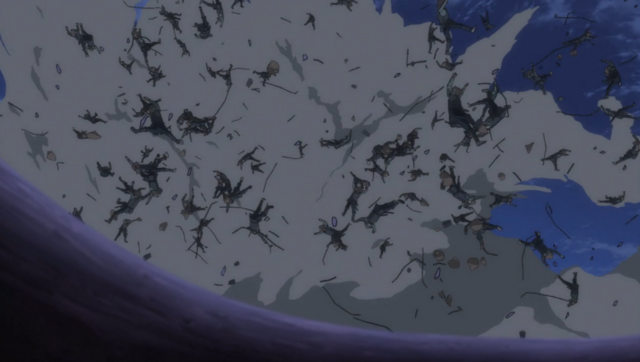 Sengoku Basara is worth watching just for the ridiculousness factor alone. The action isn’t realistic, but it doesn’t even try to be. Some special moments include Masamune fighting with six swords at the same time, or Takeda riding his horses up a vertical stone castle wall. A popular one going around now features Yukimura doing a front flip on his horse – including the horse – to fight off Masamune. The whole series is like this. Basara is pure absurdity and so naturally, it’s a fantastic time. Just when you think they’ve outdone themselves, they manage to ham it up yet again. So that being said, this choice has less to do with character development and more with how utterly ridiculous things get.

Naturally, the climactic battle against Nobunaga in the first season is nothing short of absolutely incredible. There’s something for everyone: two dudes destroying a castle with the force of sheer willpower, a giant robot general in the Sengoku era, everyone with superpowers, a villain directly from hell itself, and since it’s based off a musou game, thirty footsoldiers being blown up at once. I can’t really put into words how completely over the top it is. You have to witness it for yourself.

Assassination Classroom: Karasuma versus the God of Death 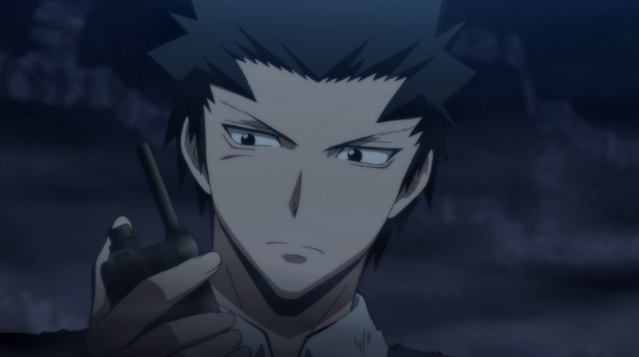 There are a lot of overpowered characters in Assassination Classroom, and this isn’t a surprise considering the main character, Koro-sensei, is threatening to blow up the earth. Koro-sensei has chosen a group of kids to be the ones to end him, but when the class consists of some middle-schoolers, the government has to intervene. In the classroom on the behalf of the Japanese government is Karasuma, a former instructor from the Air Force and currently an officer at the Ministry of Defense. We know him to be talented, but we don’t really see much of it. Hints, for sure, but never really the full picture. For the most part, Karasuma is one of the instructors watching over the students, only as a fun member of the cast.

So when Karasuma gets his moment, he delivers. We’re able to see that he’s just as capable as the rest of them. He’s able to put up a fight against one of the deadliest enemies in the series, and he does it with ease. From detecting traps behind doors to hauling up chunks of debris, Karasuma can do it all. The fight encapsulates everything about him: his duty, the things he's loyal to, and his flexibility in combat. It’s a great moment, one that leaves even Koro-sensei shocked. The action is short but sweet, and we see that Karasuma deserves all the trust he gets. What a relief that he's the class's ally instead of their enemy! 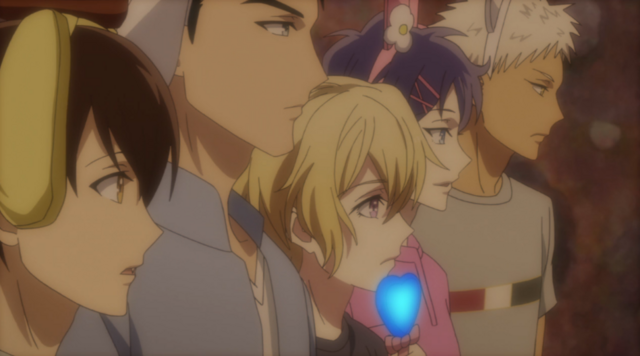 The first two examples were action sequences, but some of those defining moments can also involve a crucial aspect of any story – the characters. A subtler title on the list is Sanrio Boys, which for the most part is a pretty quiet show. There isn’t any action, and most of the tension comes from the problems between characters. Sanrio Boys features a group of high school boys who, for one reason or another, are really attached to different Sanrio characters. For that they are punished, because society doesn’t look kindly upon boys who like cute or more traditionally feminine things.

To society, liking something cute detracts from the idea of masculinity, something that teenage boys especially cling to in an attempt to feel validated. The main character spends episodes agonizing over whether he should connect with people with similar interests or be rejected by society for valuing something that’s seen as "worthless." He’s not the only one, as two other characters keep their passion a secret for similar reasons. In the end, they come to terms with what they like, and form a friend group around their mutual interests. The scene where they all hang out together for the first time and are completely open about what they like feels like a victory. Even if society isn’t accepting of what they like, at least they have their group of friends and can be themselves, if just for a moment. 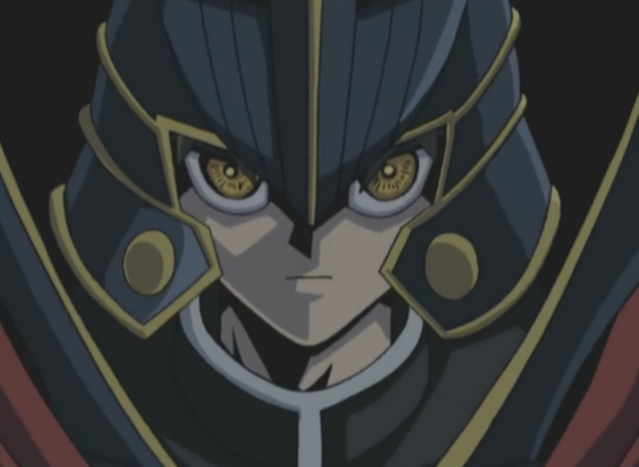 Yu-Gi-Oh! is something I grew up with, and I’ve seen every one of the spinoffs. One that particularly holds place in my heart is Yu-Gi-Oh! GX, despite the fact that overall it’s a weird experience. The first season was goofy and the second season tried hard in introducing Edo but still fell a little flat, but the third season... the third season was worth it. Judai as a protagonist was a very different type of protagonist from kind Yugi, along with good natured but slightly homicidal Atem. He’s a cheerful guy, although kind of air-headed. This initially is written off as teenage aloofness, but still, by watching the first two seasons, you can’t help but feel that Judai somehow seems a little bit off.

Altogether, Judai is a good influence on those around him, but it seems that he’s not really that emotionally invested in those he calls his friends. He’ll hang out with them, but it doesn’t seem like he’s really close to them. A lot of his actions feel extremely tone-deaf, and he never is quite keyed into other people and how they feel. He has very detached reactions to things that should be obvious, but he isn’t bitter or hateful about it. The scene that makes it all worth it happens in season 3, when he finally is able to connect with someone – and when that person is torn away, Judai stumbles. He vanishes from the story for a few episodes, and when he finally returns, all those nagging doubts you felt about him are fully confirmed. It’s a particular point in the story that reminds you that oh right, this guy isn’t actually that much of a traditional hero, is he? Maybe not your traditional "big moment," but definitely one that left an impression on me! 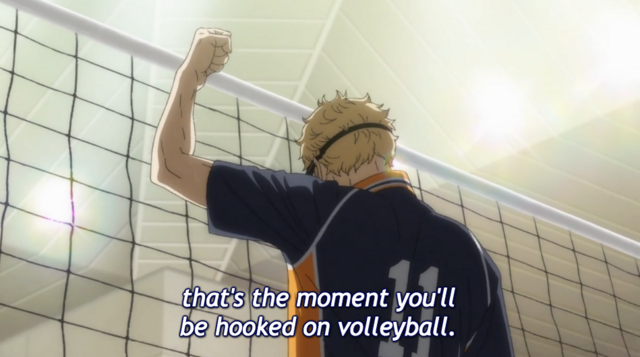 Haikyu is about a high school volleyball team, and so it’s all about a bunch of boys who really love the sport. For the most part, this seems to be the rule with the exception of one – Tsukishima. He seems to be more interested in being snippy to people than playing on the team, and doesn’t really show any sort of desire to put his all into the sport. Even when pushed to train, he only seems to be there because the rest of the team is there, and doesn’t see the point in putting so much effort into something that to him, is just a club. We find out later the reason why Tsukishima is so hesitant – he used to be passionate, but then pulled away after a betrayal to prevent himself from getting hurt.

Tsukishima shields his heart for a long time, but he slowly puts more effort into volleyball. Between being coaxed into doing more work and facing stronger opponents, Tsukishima has no choice but to step up to the plate. And come Karasuno’s game against Shiratorizawa, Tsukishima can’t be idle anymore. The opposing team is too powerful. He has to use his skills for the team, and manages to do so successfully. In doing so, he finally gets that moment – the moment where it connects, that he loves the sport just as much as the rest of them. And you can't help but pump your fist with him.

There are many titles out there with great scenes that define the whole series. Whether it’s a heart-stopping fight sequence that has you on the edge of your seat, or a culmination of effort throughout the course of the series, those are the moments that stick with you. What your favorite scene that made watching a show totally worth it for you?

Sanrio Fans and Aspiring Idols: Get Hooked on the Season's Best Boys!