Festering Wounds: The Nature of Violence in Golden Kamuy

Beneath all the layers of blood, battles, and gore, what makes the world of Golden Kamuy and its characters tick? 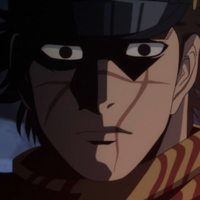 When I worked as an EMT Basic a couple of years ago, I often had to deal with stressful situations. Without going into too much gory detail, many of the patients I ended up helping were those in serious conditions. Cuts, wounds, broken bones – there was no shortage to the kind of things you had to deal with in a tiny van speeding across the highway.

Working with pain and violence is strange. First there’s the adrenaline that courses through your veins. Then there’s the sweaty palms, the rushed thinking, the pupil dilation.  And in between all of it is the speed of time slowing down, as every split-second action matters. It’s ruthless. It’s perilous. It’s intense. It's also somewhat addictive.

Golden Kamuy manages to capture this torrent of emotions near perfectly, and what’s even more fascinating is how it does it. We can always correlate action and adrenaline with blockbuster moments, like the fast-paced battles between Sugimoto and his enemies, or the exciting moments when Asirpa manages to capture her food. But underneath the waves of action is an ever-present current of violence, whether it’s performed by humans or animals, toward humans or animals.

One of the most prominent characteristics of Golden Kamuy is the setting. I don’t necessarily mean the cold landscapes of Hokkaido, but rather the time in which the series takes place: during the Meiji Era, specifically the Russo-Japanese war. This was a tumultuous time in Japan; it had just opened up its trade to other nations, which led to wars over borders and land. Many lives were lost during the Russo-Japanese war, leading to general public dissatisfaction with the government and loss of trust.

One of our main protagonists, a soldier named Saichi Sugimoto, is a clear example of this bloody result: he is both driven but also dissatisfied with the present state of the war. Indebted to a friend brutally killed, but also tormented by his own violent past, he sets out on an adventure to find gold. Lieutenant Tsurumi is also a victim of this situation; he too, sets off in search of the gold out of extreme bitterness towards the government as he feels like they betrayed him and his soldiers with very little remuneration.

The other main protagonist of Golden Kamuy, an Ainu girl named Asirpa, is also inevitably tied to a bloody history: she ends up helping Sugimoto not out of need or pity, but for her own reasons. Her village ended up being used by gold hunters, and she lost her father in the process. These events mold our cast’s personalities, for better or for worse.

Violence through Personalities and Philosophies

What makes our protagonists the "good guys" in Golden Kamuy isn’t necessarily their good deeds or intentions. On the contrary, nearly everyone in the show has violent tendencies. Sugimoto, for instance, has such an intense drive to survive that it can morph into bloodlust or cause him to kill anyone in his way. Asirpa’s knowledge of the wilderness and her quick decision-making can be incredibly handy not just for hunting game, but also for immobilizing enemies and escaping safely. Neither of them have qualms with doing what is necessary to achieve their goals – all except cold-blooded murder.

On the other hand, Asirpa and Sugimoto’s enemies are far more bloodthirsty and have a much more broken moral compass. Take for instance, Lieutenant Tsurumi. While part of his madness could be associated with a severe head injury during the war, it’s clear that the war itself transformed him: ruthless, quick to temper, and cruel, he has no problem sacrificing his own to achieve his goals. Ogata Hyakonosuke, another soldier Asirpa and Sugimoto encounter, is a precise and logical sniper, easily able to discard his emotions to accomplish his mission. Hijikata Toshizou may look old and weary, but carries his bloodthirst with a sense of laid-back emotion and optimism. His philosophy differs from others – whereas most enemies relish in killing or do it as a last resort, Toshizou sincerely enjoys fighting to the death.

This all results in incredibly violent battles, often leaving people dead or terribly wounded. Whether it’s fingers being bitten off or skewers being pierced through faces, Golden Kamuy has no problem showing the kind of merciless violence that happens when people like these end up against each other.

Violence in the Wilderness and the Hunt

While much of the show is devoted to these ruthless soldiers and their dedication to finding hidden gold, a good chunk of it focuses on Asirpa and her skills of survival in the wild. Asirpa is very different than most of the men in the show; her reasoning for violence doesn’t necessarily stem from a violent history, but rather the culture of her people. As a result, the show goes into interesting details about how Asirpa and her people – the Ainu – and their beliefs about nature. Asirpa herself is capable of great violence. She can take down giant bears and deer, and isn’t afraid to maim enemies if her life is at stake. However, in her violence against animals, there is a deep respect and honor for prey. Much of her brutality is steeped in necessity; she never kills more than she needs, and only takes what she can use.

Hokkaido’s unforgiving and harsh climate only embellishes this undercurrent of violence in the show. As early as episode 2, we see what happens to trespassers who take the cruelty of nature all too lightly. They either get severely wounded by animals or the freezing rivers. In this world, almost everyone – and everything – is out to get you, and it is only through wits and careful thinking that one can avoid the dangerous pitfalls of surviving in the wild.

In these ways, to me, Golden Kamuy is not just a dissection of how violence is instigated and how it transforms people and history, but an investigation as to whether violence is really necessary. In the world where Asirpa and Sugimoto choose to reside, it seems to be. But that doesn’t mean that it has to be exploitative, glorified, or fetishized. Rather, Golden Kamuy states that violence is an inherent part of nature, and that’s how it should be presented, whether it’s woven through the tragic pasts and history of people, through their philosophy of living, through the constant survival in the wilderness, or through self-defense. Violence is but a tool – a survival instinct – and it is how we wield it that reflects who we are.

When not finding ways to doom all her ships, Natasha can often be found on her twitter as @illegenes, or writing more about anime on the blog Isn’t It Electrifying! Feel free to swing by and say hi.
Tags
golden kamuy
« Previous Post
Movic Offers Made-to-Order Plushies for Dragon Pilot - Hisone and Masotan TV Anime
Next Post »
Monster Hunter Aims at 3D Animated Special in 2019
Other Top News
1 Comment
Sort by: