Hochu Otsuka Thinks Villains with Brain Fluid Leaking from Their Head Are Just the Best!

An interview with the voice of Lt. Tsurumi, Hochu Otsuka 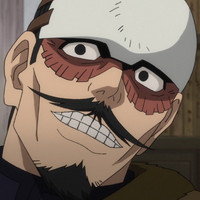 Golden Kamuy's official website is releasing a series of interviews with cast and staff over the course of the Spring season, which we're translating and brining directly to you! They started things off with the character designer, Ken'Ichi Onuki, followed by animal designer, Ryo Sumiyoshi, the art director, Atsushi Morikawa, firearm designer Koji Watanabe, prop designer Shinya Asanuma, composer Kenichiro Suehiro, and director Hitoshi Nanba.

But they didn't stop there! They interviewed Kamikaze Boy from MAN WITH A MISSION about Golden Kamuy's opening theme, "Winding Road" and THE SIXTH LIE, the creator/performers of the ending theme "Hibana"! They're making their way through the voice cast, starting with Chikahiro Kobayashi and Haruka Shiraishi, the voice actors behind Sugimoto and Asirpa, and now Hochu Otsuka, the voice of the villainous Lt. Tsurumi! 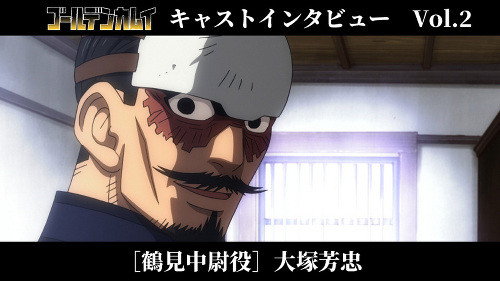 Tell us what you thought of Golden Kamuy.

I’m getting a feel for the characters and story as I read the script, and it’s really interesting. When I got the role of Lt. Tsurumi, I remembered how I’d borrowed a book called Whistling in Kotan when I was in elementary school. It was a long time ago, so I don’t really remember the details, but it was about the oppression of the Ainu and reconciliation with them. It was a really great book, and I remember being excited when I was reading it. That was the first time I’d had any contact with Ainu culture, and so I knew a little about them. Getting this role brought back an excitement I’d felt fifty years ago. It felt a little like fate, and at the same time, like I’d been given an opportunity to do something really great.

Tell us what you think of Lt. Tsurumi.

He’s the kind of character that I play a lot, somebody who’s filled with madness and ambition, but also cares for his brothers in arms. These types are endlessly fascinating to me. Also, he’s got fluids leaking out from his skull [laughs]. I think that really tells you everything you need to know about the character, and it gave me a ton of ideas for how to play him. Thanks to that, I really knew the direction I wanted to take with the role, and it’s really exciting to play. 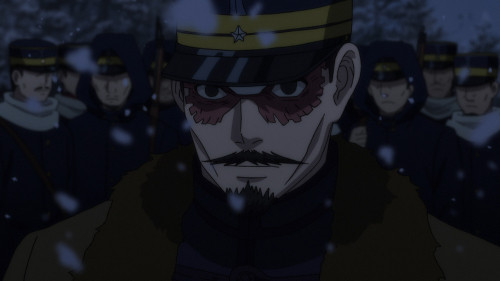 Are there things that are particularly important for you when you play the part of Lt. Tsurumi?

It would be no fun to just play him as an obvious madman at the beginning, so for the first part of the show, I tried to play him as quiet. Tsurumi is an intellectual, with a lot of stuff in his past. I’d like to try to keep him quiet, and make you go “Is he scary? I wonder if he’s scary,” and then show who he really is.

So you’re enjoying seeing how he’s going to change as the story progresses, then.

That’s right. I know something crazy is going to happen at the end, after all [laughs]. So at the start, I keep him down to about 10% of his maximum strength, and then gradually bring it up. Also, he’s a man with a very elaborate plan driving all his actions, so I need to make sure that gets across, and just hope that connects with the direction the story’s going.

Did Director (Hitoshi) Nanba and Audio Director (Jin) Aketagawa give you any special instructions on how to play him?

Not really. The one example I could think of is that during my monologue, where I gradually get emotional, they wanted me to make it so there was a bigger gap between the emotional highs and lows.

Very calm. I’m in a lot of anime, and lately, no matter which studio I go to, I’m the oldest person there [laughs]. This anime has a lot of people my age, along with people who’ve done movie dubbing for a long time, so it feels like I’m right at home. We can talk about a lot of personal stuff or just chat. It’s a lot of fun. For the acting itself, when I’ve worked with somebody for decades, we can get a pretty good idea of how we’re both going to act out a role.  Like, “You’re going to do this, right? So I’ll react like this.” We work really well together.

Were there any lines in the early part of the series that were particularly important for making the character stand out or seem interesting?

I’d say the line I mentioned before that helped me understand the character, about brain fluids leaking out from his head. I thought to myself, “Man, guys like this are the best,” and I had a ton of fun playing the role. When you do a job like this, even the smallest things can give you hints as to how to do a line, or understand a character. So whenever I feel something like that, I always make sure to grab onto it and hold it tight. 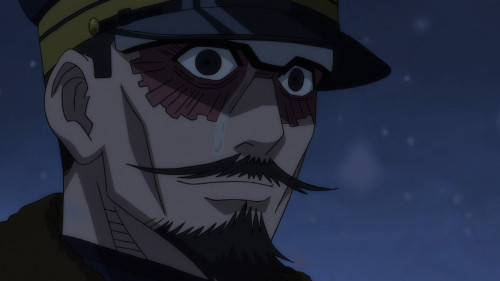 You’ve played a lot of insane villians. Is there anything that makes Lt. Tsurumi different from the rest?

There sure is. I play a lot of bad guys, so I worried that he’d end up seeming similar to the others, but that didn’t happen at all. Even compared to the characters I’ve played that have had complicated mindsets, this one is totally unique. I don’t get a lot of chances to play characters from the Meiji period, too, so it was really interesting.  When I say his lines, I try to make it sound like it’s coming from someone who actually lived in that era.

The anime’s only just started airing. Let’s finish with a message for the fans.

I’ve been in this business a long time, and Golden Kamuy is something new even for me. It’s a way to learn about the Meiji period, which is kind of the start of modern Japan, as well as Ainu culture, too. It’ll give you a lot of new ways of looking at things. There’s lots of real people in it, too, so if you’re interested in them, maybe you’ll want to check out a book about them and learn more. It’s not only filled with things to stimulate your intellectual curiosity, but the story itself is really fascinating, too, of course. There’s a lot of surprises in store, too, so please watch until the end, and don’t miss a second.

INTERVIEW: So I'm a Spider, So What? Opening Song Artist Riko Azuna