Three of Fate's Biggest Names Reflect on One Year of Grand Order! 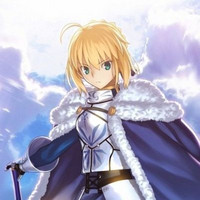 It's been just over a just over a year since Fate/Grand Order was released in North America during Anime Expo 2017 and the mega-popular mobile game returned to host its 1st Anniversary Celebration Event, holding a panel and bringing the Fate/Grand Order VR Experience to the convention floor. On site were the game's director, Yosuke Shiokawa along with two of the franchises most storied voice actors, the voice of Arturia Pendragon, Ayako Kawasumi, and Satoshi Tsuruoka, whose Fate voice credits include Gilles de Rais, Arash, Caligula, and Spartacus.

Although the trio had a busy schedule, we were able to sit down with them to ask some questions about their work with Fate and the anniversary of Fate/Grand Order's western release! 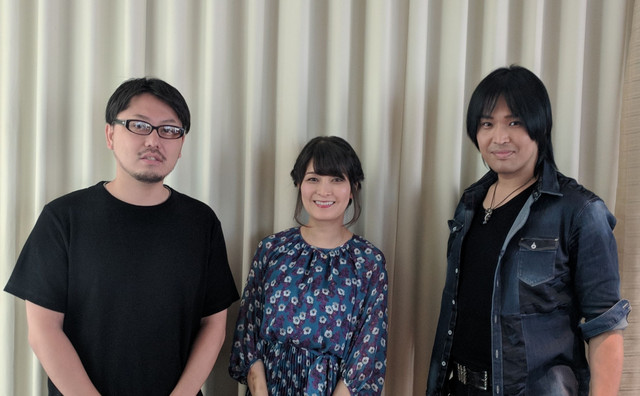 We’re just over a year since Fate/Grand Order was first released in the US and Canada during Anime Expo 2017. Can you all describe how the experience has been?

Shiokawa: Prior to the launch at Anime Expo, there hasn’t been a mobile game from Japan that succeeded in the U.S. However, after releasing the game, we noticed users becoming more excited and involved, so as the users continued to increase, so did our excitement.

Have you had any memorable fan interactions?

Shiokawa: In April, I was invited as a guest to Seattle’s Sakura Con. There we announced Jeanne d’ Arc Alter and we received a standing ovation. It was very uplifting and inspiring to see how popular she was and the fan’s reactions to the announcement.

For the voice actors, do you have fans approach you these days to tell you that they have one of your characters on their teams?

Kawasumi: I unfortunately haven't had the opportunity to interact with the U.S. fans as much as the fans in Japan; however, in Japan, I have people coming up to me to tell me how much they love the Fate/Zero series. Coming over to the United States where there is a big market for mobile games, I was a bit worried since the game is so text heavy and the story is so big - will everyone understand it? But it feels just like it does in Japan. It’s really wonderful to see American users accepting us. The characters that they have, even though their levels may not be that high yet, they still love them and work hard to level them up.

I understand Shiokawa-san also worked on Dissidia, which is another huge crossover title. What's it like navigating such huge character catalogues where there is large fan demand for characters to be included?

Shiokawa: I, of course, would love to include all the characters everyone loves. But at the same time, if we only included characters that people loved, then it wouldn’t be Fate anymore. That is why I want to include characters that will pique players curiosity, making them ask, “why were they chosen?” and through that curiosity get to know the characters and see how they blend into the Fate world. 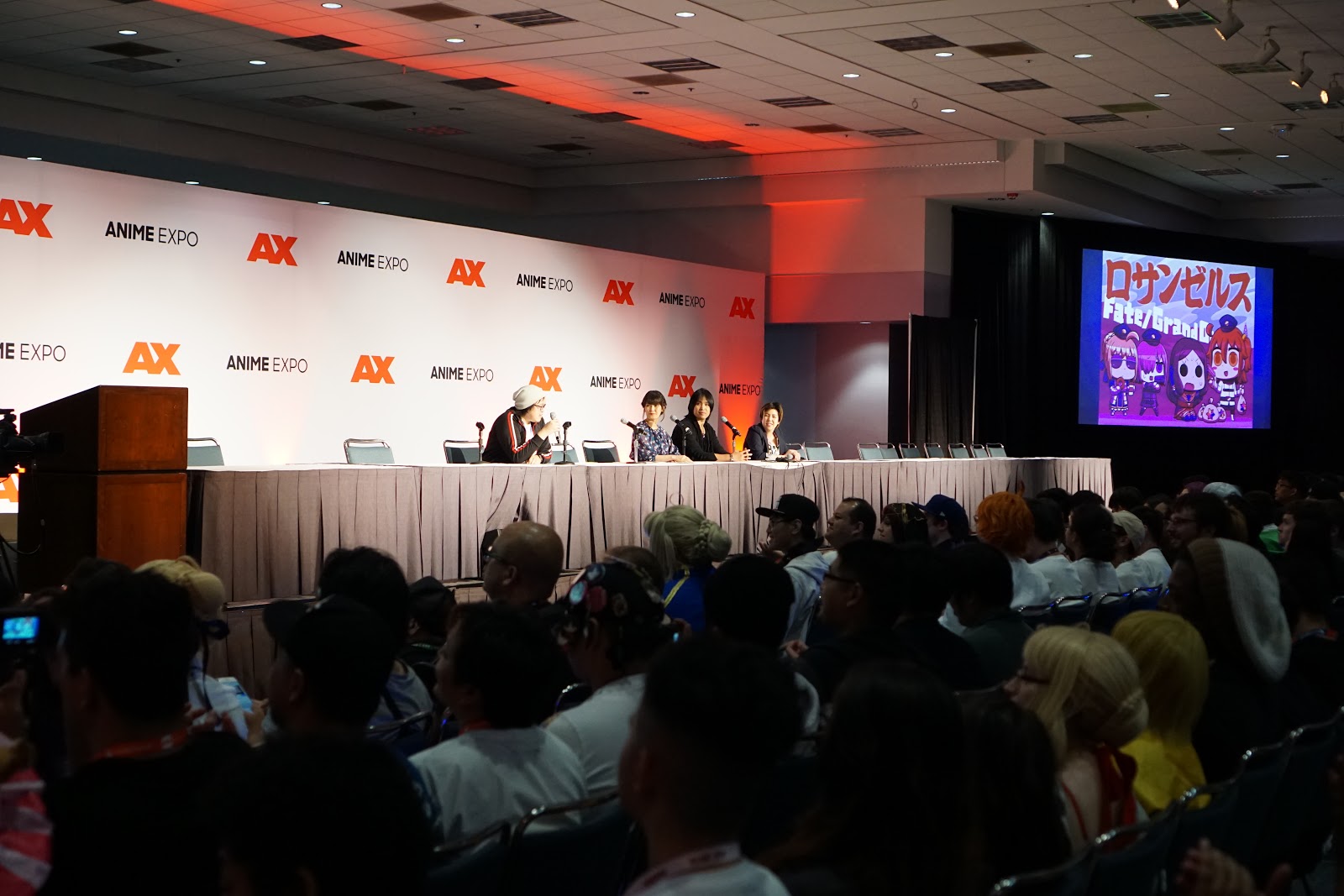 Saber has always interested me as a consistent character who has been put into a number of different narrative roles. Is it difficult adapting to so many different settings?

Kawasumi: I always consider Saber in Fate/stay night as my base… my foundation. And with Fate/Zero based 10 years before Fate/stay night, I thought, “how would I have been 10 years ago?” In Fate/Grand Order, as Shiokawa-san stated, I always think back to how King Arthur or Saber would have been in Fate/stay night. I’m fortunate to have supportive illustrators and writers who will expand on each story, so I can just go in as I am. So… it’s not much of a challenging process.

Saber strikes me as pretty businesslike and dedicated to saving her kingdom. Do you think Saber herself struggles with shifting between fighting, picnics, and beach volleyball?

Kawasumi: No matter what, I am King Arthur, and that is my foundation. Coming into our current situation, her stubbornness and stern outlook on life doesn’t change regardless of the setting, but at the same time, as I come in touch with new things, I focus on being able to enjoy that as an experience. It’s easy to forget that she was just a teenager when she first took up her sword so she’s still that young girl inside and that’s what I enjoy exploring most.

How do you think Saber feels about Nero and Mordred sharing her image?

Kawasumi: Do they really look that much alike?

We do have parodies like Heroine X, and while the face may be similar, the more I do it, the more I understand that it’s all about the inside rather than what’s on the outside.

Since Altria could be considered the face of the Fate franchise, what is it like being associated with such an iconic character?

Kawasumi: It’s been 12 or 13 years since I first played Saber and I’ve definitely grown up with her. If you told me back then how much impact Saber would have, I think the pressure would have been too much. Regardless, it’s a great honor to be able to play such an iconic character and I count myself very lucky to have such an opportunity. 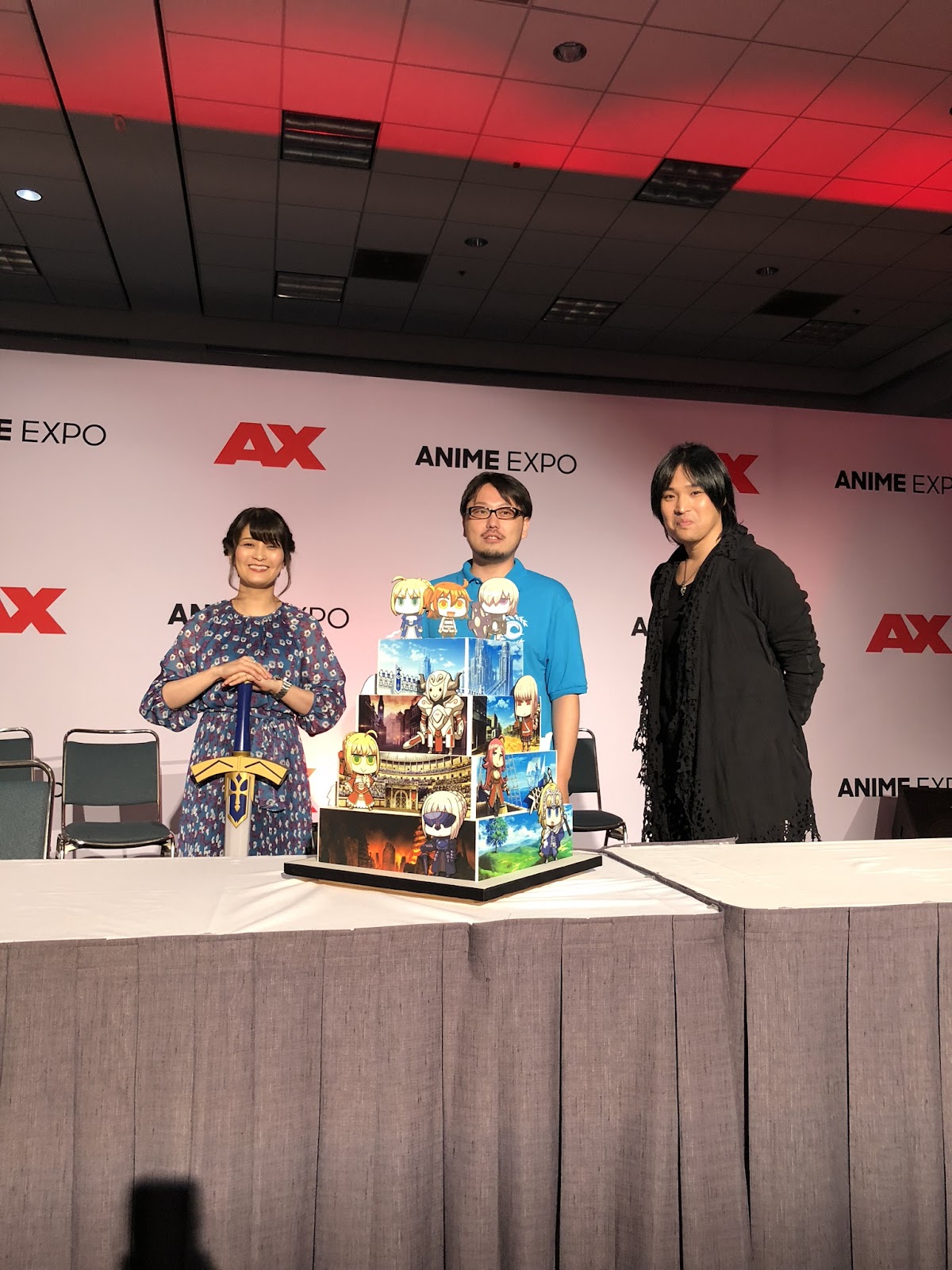 My next question is for Tsuruoka-san. I thought that you might have the opposite problem of Kawasumi-san voicing so many roles within Fate. Has it been challenging developing so many distinct voices in the same universe?

All the roles you’ve played are very eccentric or loud in different ways. Do you have a favorite among your roles that gives you more leeway to have fun?

Tsuruoka: When I first came into the scene it wasn’t for the animation… it was for an audio drama, so we had no imagery to associate with the eccentric characters. Between recordings, I had a moment with Kawasumi-san and I was able to talk to her about the passion that she has for her character. She’s always had that same passion that she has today and I thought to myself that I wanted to support her no matter what. I wanted to be the one to remain in the shadows while she was in the sun. Like Excalibur, she’ll be the one that’s always shining up above.

I mentioned earlier that none of the roles are difficult, but that’s because I already made the decision to be the one supporting her so she can shine the brightest.

Gilles de Rais as a Caster was of that very eccentric type of character, but I see that he also received a Saber version which seems much more cool and maybe a bit closer to the real life version. How did you feel about the new version?

Tsuruoka: I love both, definitely, but even as a Caster in the Fate/Zero series, I thought of myself as a Saber already. If you’re in a dark place, you want something bright. You have a longing for it. I thought my job was done in the holy war, but then they showed me the art for the Saber version and I cried, literally wept, after seeing it. Thinking, “I can finally let my Saber side come out” and, in doing so, I was finally able to make that link with my character’s connection with Jeanne before everything fell apart.

Fate has become a massive international phenomenon and I wanted to know what each of you thinks it is about the series that makes it so compelling to a global audience.

Shiokawa: When I made the game in Japan, we based everything on what worked in Japan. When deciding to expand overseas, we weren’t sure whether or not we should change it. Should we adjust to each culture or go straight forward with what we already have? That was a hard call. But now, I strongly believe the fact that we went with keeping the original Japanese ambience and values is what attracts our fans.

Tsuruoka: In the past year, I’ve gone to Indonesia, Jakarta, China, Shanghai, and today I’m here. My sole purpose is to bring to life these characters and let them shine. That’s my way to give back to everyone. So even on the stage that I’m going to go on later on (referring to the Fate/Grand Order 1st Anniversary Celebration Event at Anime Expo), I can feel the fan’s passion and respond back to that. It’s as simple as that.

Kawasumi: Since I’m not in the development team, analyzing why it’s mesmerizing is a bit tough since I’m just voicing the characters and giving life to what’s already been made. Being involved with the series throughout all this time, I myself loved it from the beginning. Seeing each character develop throughout time, it’s as if it’s a natural process of improvement. In the beginning, we were very nervous about bringing the game elsewhere because of the cultural differences. Would the new fans accept us or love us? In the end, it boils down to the fact that our fans do love us and accept us for who we are and what the game is, and I think that’s why the game is successful.