The True Soul of MEGALOBOX

How the Megalonia finals let Yuri and Joe thrive as fighters 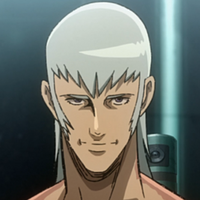 MEGALOBOX wrapped up a few weeks ago with what the show had been teasing the entire time—a showdown with Joe and Yuri. Unlike their previous fight, which was not taken seriously by Yuri, this was a battle of wills that lived up to its hype. At the same time, it proved that Megalo Boxing doesn't need inventions like Gears to succeed and thrive. Joe’s disruption of the sport by fighting without gear—outside of his penultimate fight—showed that there was still a market for regular boxing.

And, most importantly, the final fight of Yuri versus Joe also allowed people to understand that real Megalo Boxing, like all combat sports, relies not on gimmicks, but on competition and respect. 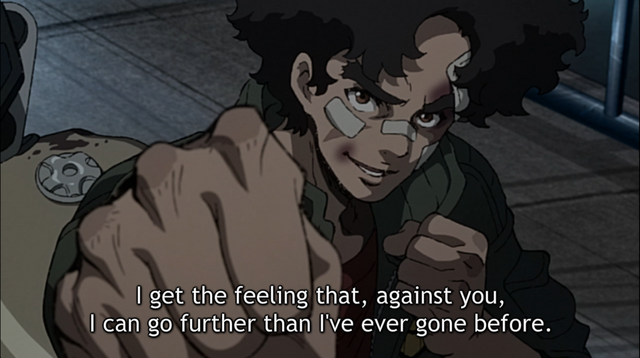 Throughout the series, Yuri has been touted as the best boxer in all of Megalo Boxing—whether through his nickname, “King of Kings,” his collection of championship belts, or his being the reigning Megalo Boxing champion. But even with everything he has accomplished in the realm of Gear-style boxing, Yuri's encounters with Joe and Joe's defiance of the current boxing system force the champion to keep an eye on the upstart.

Heading into Megalonia’s final four, Yuri and Joe are intrinsically tied to each other. Joe watches from behind the crowd as Yuri wins his fight quickly, even knowing the moment that it would end. Yuri, in turn, witnesses Joe’s fight mostly from the Shirato luxury box before moving ringside. They're similar, brought together by their drive and determination. They're tied to another and fighting for their dreams. Yet it’s the untold respect between the two that brings them closer as competitors.

In the final set of episodes, we are shown the respect between the two when they have a conversation following Yuri’s semi-final victory. Here Yuri learns what has pushed Joe this far and why he has decided to fight Gearless. It’s no longer just a gimmick to get Joe over with the fans and rankings—it’s about freedom, fear, and getting a true sense of fighting. Joe also explains that he still wants a real one-on-one fight with Yuri, the same goal he’s had since their fight underground, feeling a fight between them would push himself to the absolute limit. This answer piques Yuri’s interest in not only Joe, but also the magic a potential fight with him could have. 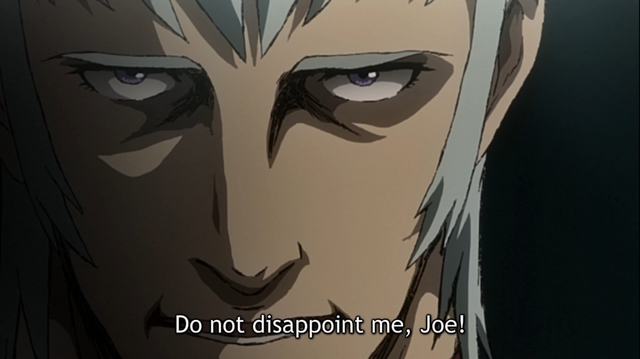 This is also why Yuri is immediately disappointed and confused when he watches Joe’s next fight and sees Joe come out in Gear. With the drama surrounding Joe and Nanbu unknown to Yuri, it seems as if Joe’s earlier comments were hypocritical. Is this really the same man that said fighting without Gear is freeing? Is this truly the man who would give Yuri his greatest fight?

As Joe contemplates throwing a fight and giving up his chance at Yuri, the man appears at ringside. He makes a plea to not disappoint and not forget what he said, attempting to bring Joe back to his senses and not give up. The last time these two were like this was in episode 2, but now it's the opposite of when Joe was the one trying to bait Yuri into another fight. However, Yuri's plea doesn’t work. It's only from a plea from Nanbu that gets Joe back up. It’s enough for Joe to win and also to instill jealousy into Yuri when he sees the liberating way Joe is able to fight after the rest of his Gear falls off. And so, the stage is set for what one of the broadcast commentators calls "an unpredictable match." 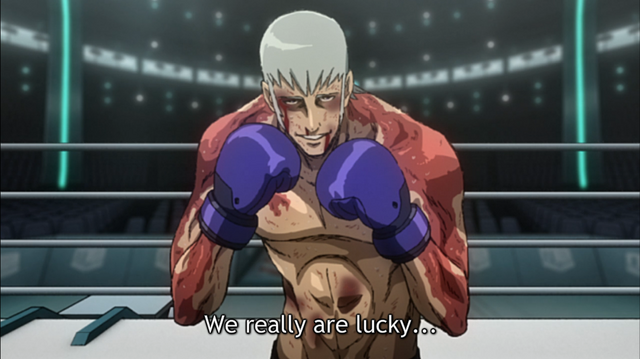 Lately in real-life combat sports, there has been an increase in brash, outspoken, and flashy types of fighters and hype for fights. It goes back to boxing and pro wrestling being distant relatives of one another under the banner of sports entertainment. MEGALOBOX draws on this as well with the Megalonia entrance hype videos and pro wrestling-esque entrances that are reminiscent of Japanese combat sports promotions, specifically the now defunct PRIDE FC.

But Yuri versus Joe is a fight that needs none of that, and is rightfully devoid of the sports entertainment aspect of combat sports. This is just a fight to see who truly is the best between two fighters. To add that style of promotion in at this point of the series would have gone against what their rivalry is truly about.

The finals of Megalonia become a showdown that will decide which is the true form of fighting: Gear or Gearless. At least, that was the initial plan, but it's scrapped after Yuri decides to get surgery to remove his integrated Gear. His respect for Joe has skyrocketed to the point that he only wants to fight him on an even playing field. Yuri wants no advantage than his own skillset. At long last, he’s finally found his once-in-a-generation fighter who will bring out the absolute best in him and give him the fight he’s always longed for as a competitor. 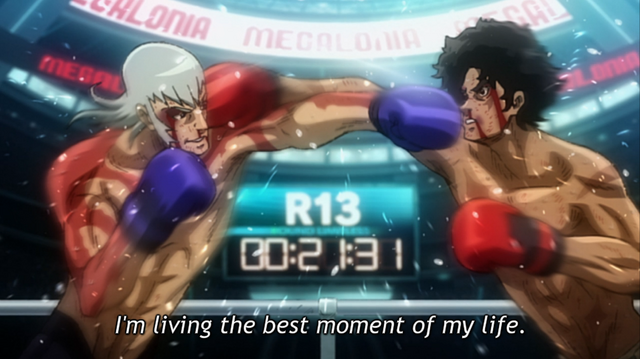 Once again, the two are tied together as they both go to old rivals to help them in the lead up to the finals. While Joe trains traditionally for the fight, Yuri undergoes excruciating pain to achieve the fairness he wishes. Just like Joe, he faces near-death to get what he’s always wanted. And when Joe is told about Yuri becoming Gearless by Yukiko, he is gleeful. He knows now as well that this will be the ultimate form of competition, what he’s been waiting for all this time.

The Megalonia finals are a spectacle—not of showmanship, but of grit, drive, determination, toughness, and respect. Viewers of the show and the people in the series that witness the fight bear witness to two men who are giving everything in their bodies to showcase true Megalo Boxing.

Two men who have an incredible admiration for the other. Two men that cut from the same cloth and who push themselves physically and mentally to the brink. Two men in the pouring rain give fans the beauty and brutality of fighting in 38:51, thirteen rounds of match time. Two men that prove Megalo Boxing doesn’t need Gear, just fighters that bring out the absolute best in one another. That's the true soul of Megalo Boxing.