One Piece’s latest arc is the best one yet! 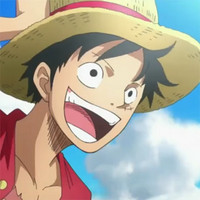 One Piece recently turned twenty-one-years-old. That means that, if I ever met the physical manifestation of One Piece in a bar, I could legally buy it a drink and not get arrested. “A round for me and my best friend,” I’d say to the bartender, motioning toward the pile of manga that I’ve arranged in a crude human shape on the seat beside me.

However, common pop culture logic says that if something lasts a long time, whether it’s a book series or a TV show, it absolutely has to become bad at a certain point. And with that logic, we should be saying “Oh, One Piece. That hasn’t been good in, oh my, 16 years.” But One Piece has yet to succumb to age. In fact, the Whole Cake Island arc, which is where the anime currently sits, might be the best arc in the entire series. How? Well, because it’s redefined One Piece in more ways than one.

In a series that has always been known for its boundless enthusiasm, Whole Cake Island feels as fresh as early One Piece, and that’s because…

When Whole Cake Island began, it seemed like it was going to be a lot like the Enies Lobby arc. They both have stuff in common – they begin in the wake of Luffy and Luffy’s punches freeing a kingdom from an evil warlord (as he did in the Alabasta and Dressrosa arcs), events are set in motion after a crew mate abandons the Straw Hat Crew (Robin in Enies Lobby, Sanji in Whole Cake), and they deal with the crew facing near insurmountable odds (In Enies Lobby, the crew declares war on the World Government, and Whole Cake Island is owned by Big Mom, one of the Emperors of the Sea.)

But there are definitely worse things than One Piece creator Eiichiro Oda doing an Enies Lobby Remix Arc, seeing as Enies Lobby is one of the best anime arcs of all time, and the reason why we should have fiction in the first place. But then Luffy punched Big Mom, and Big Mom reacted like someone had thrown a ping pong ball at her. It was then that it became clear that maybe this wasn’t going to end in Luffy triumphantly walloping someone while orchestral music blared and people around the world fist pumped in approval. 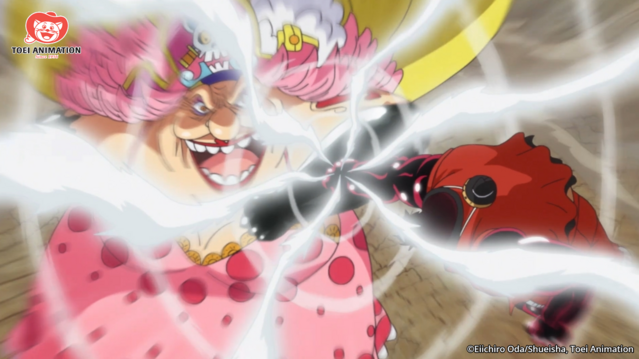 Because while Enies Lobby is about a rescue and a victory, Whole Cake Island is about a rescue and survival. They saved Robin and got the definitive win in Enies Lobby, but when gathering Sanji, they’re just gonna have to settle for the moral victory. It’s like those moments in an open world RPG when you decide to do a quest that is way above your level and you get decapitated before you can say “Wait, LET ME APPLY MY POTIONS.” The Straw Hat Crew was equipped to fight in Enies Lobby, but Whole Cake Island only should’ve been tackled after they had done a few more hours of level grinding.

So I totally understand why the Straw Hats spend so much time running away in Whole Cake. I’ve been knee deep in an RPG dungeon, desperately hoping that my stamina holds up so that I can get far enough away from the monster to heal myself. I get you, Luffy.

The “Boss” Of The Arc Is Unexpected

At this point, Big Mom is basically Godzilla. No one is equipped to stand up to her, meaning that the climactic fight is going to be between Luffy and someone else. And that someone is Charlotte Katakuri, Big Mom’s powerful son and owner of the raddest boots in all of anime. 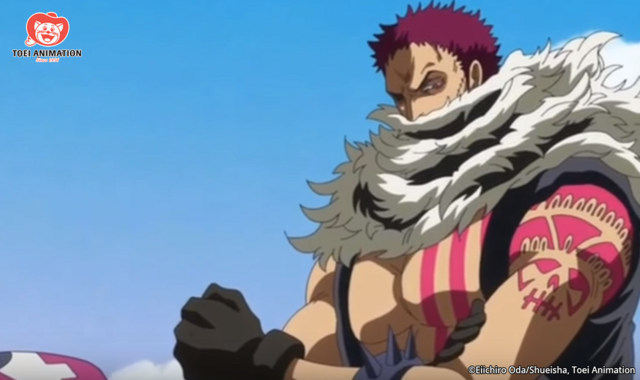 I won’t lie, when I first saw Katakuri, I told myself “Eh, I guess Sanji will duel this guy. HE’S NOT CAPTAIN LUFFY MATERIAL.” Oh, how foolish I was. I envisioned Luffy getting that inspirational HAWK ELEPHANT KONG GUN BAZOOKA against Big Mom, while Sanji talked about food and then kicked Katakuri out of his boots with an attack that was named after said food. That’s what I thought, which, in retrospect, is a very “Come on, Daniel. Do you even One Piece?” idea.

But then we learned that Big Mom couldn’t be stopped and that Katakuri was waiting on the Straw Hat’s ship, so it was gonna have to be Luffy versus Katakuri. And that is so much more exciting than Luffy fighting against Big Mom. It sets up Big Mom as an even bigger threat in the One Piece universe (Will anyone ever be able to take her down?) and it also better establishes the overwhelming strength and danger of the foes in the New World, where the action currently takes place.

Luffy is going to have an exhausting fight with Katakuri, who is technically the bigger villain’s sidekick. That’s like if Michael Keaton’s Batman couldn’t beat up the Penguin, so he instead spent hours trying to wrestle one of the clowns.  It’s wonderful is what I’m trying to say, and I applaud Eiichiro Oda for having the patience to not give us that Big Mom defeat satisfaction yet, and instead throw the world into even more chaos by leaving her as an obstacle not yet conquered.

By Being Apart, It Makes The Crew Stronger

I’m like you – I get a lot of joy out of seeing the entire Straw Hat crew all together. And little did I know that when Sanji, Nami, Chopper and Brook all left Dressrosa, that they’d be Luffy’s team in Whole Cake Island. And when Luffy made his team, Sanji wasn’t even on his side at the time. So he chose Nami, Chopper, Brook and the newcomers Pedro and Carrot. Not exactly the Straw Hat A Team. I don’t want to say that they’re the JV part of the crew, and that dudes like Zoro play for the Varsity league, but to be fair, Brook and Nami have had way less moments so far where they’re cutting apart villains that are the size of mountains. 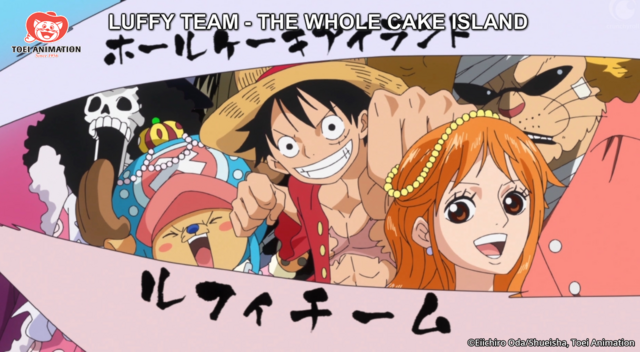 But with Zoro there, you know what Zoro would do – probably grumble and then slash things. With crew mates like Nami and Chopper, things get way more tactical. For example, recently, Nami began feeding small thunderclouds to Big Mom’s flying cloud Zeus, who ended up shocking Big Mom with a giant thunderbolt. I wouldn’t have even considered that as an option, which means that I’d last about four seconds in the One Piece universe. 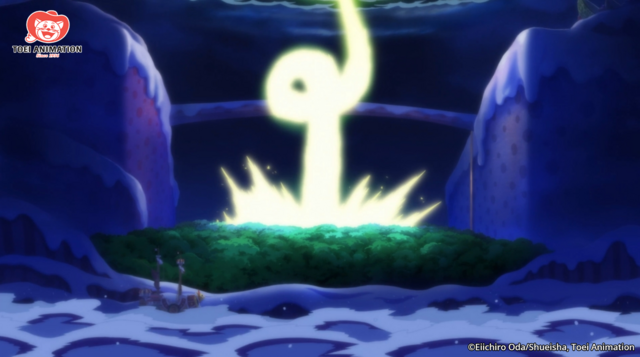 Or when the crew has to rescue Brook who, after having an awesome yet one sided fight with Big Mom, is now trapped in her clutches. Yes, a lot of it is played for comedy, but in a story that’s increasingly about powerful people doing powerful things to one another, you absolutely need moments like that. One of Eiichiro Oda’s strengths is that, no matter how “weak” he makes someone, all of the Straw Hat crew members matter. It isn’t just Luffy And His Amazing, Underwhelming Friends. Whole Cake Island gets you invested in these characters again, despite the fact that they rarely get to throw the knockout punch.

It Makes You Scared For The Characters For The First Time

It’s hard to get scared for the members of the Straw Hat crew. We know that Luffy is probably not gonna kick the bucket before the end, mainly because Zoro would look pretty dumb in a straw hat. That is, it was hard to get scared for them before the Whole Cake Island arc where, for the first time in years, I actually entered into conversations about which crew member was mostly likely to die.

For those that don’t read the manga and only watch the anime, 1) I’m not going to spoil anything, and 2) I respect your decisions. Because in both, there is the palpable sense of dread, the sense that something might go wrong at any time. That’s a hard atmosphere to capture in a shonen series, where many battles take the form of “You beat me, but now I will beat YOU.” I’ve never been so scared of losing one of my Straw Hat pals.

21 years in, and I’m finally starting to worry about the crew. So I guess that’s the biggest reason to keep up with One Piece if you may have dropped out of it – Whole Cake Island forces you to not look at these characters as typical protagonists, but as people that might get stomped to death by Big Mom.

Daniel Dockery is an editor for Cracked.com and a writer for Syfy. He has an absolutely adorable Twitter.

Jump Festa 2021 to Be Held Online, Details to be Finalized