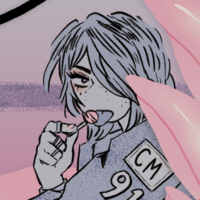 I’m not exactly a fan of visual novels; I’ll say that up front. It’s more my lacking the attention span required than any problems with the genre itself. I tend to gravitate towards action games with all their flashing lights and bright colors. I wasn’t quite sure what to make of Heaven Will Be Mine. How would the bombastic, high-paced action that has come to represent the mecha genre for me mix with the static, text-heavy visual novel format? Would tumultuous battles reach for the stars yet fall flat in a flurry of unmoving portraits? Would it instead set its sights on the unsung heroes of mecha who manage matters back at base while pilots capture the glory? I didn’t quite know what I was getting into when I booted up this game for the first time, but upon hearing the first few haunting notes of Alec Lambert’s exceptional soundtrack, seeing the first glimpses of Christopher Simon’s sharp, colorful UI design, and seeing the dynamic ways each portrait was utilized, I realized I was in for something special. 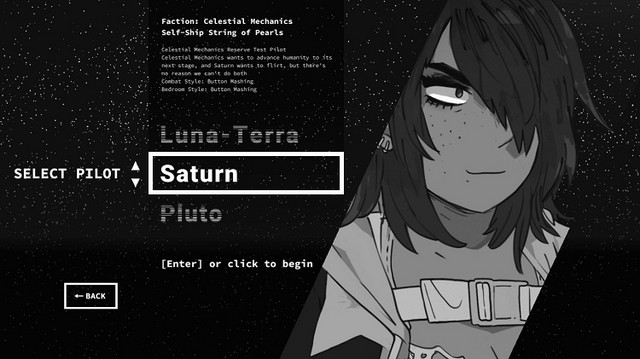 Heaven Will Be Mine is the latest visual novel from publisher Pillow Fight Games and the minds behind 2015’s We Know the Devil. In it, players can take control of one of three different pilots who fly advanced mechs called Ship-Selves to play through 8 separate missions in their gigantic robot shoes. Each pilot belongs to a separate faction, all of which are vying for control over an object called the Gravity Well that will ultimately decide the fate of humanity itself. As pilots, players engage in giant robot battles and make decisions in those battles that affect their alignment with each faction. Faction alignment determines which ending players will get at the end. Endings are not at all affected by which pilot players choose at the beginning. That being said, each pilot has their own unique perspective on the three-way war for humanity’s future they’ve found themselves in, so I encourage everyone to play through each pilot's route at least once to get the full story. 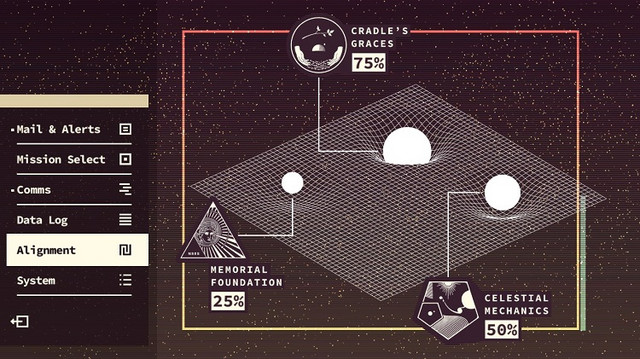 I should clear something up here. Before, when I mentioned there are giant robot fights, that might have given off the wrong impression about this game. There isn’t actually a whole lot of fighting in this game. Well, there is, but not of the giant robot kind. Rather, most of the fighting you’ll see in this game is between exes, lovers, and exes/lovers. Heaven Will Be Mine may technically be about a giant space war for humanity’s future, but that’s really all just flavor text. It’s the exposition necessary to set the real scene, which is about a bunch of scared, lonely children who were forced to become adults in space. If you’re only interested in mecha stories about action-packed, hot-blooded battles among the stars. Heaven Will Be Mine is not for you.  If you’re interested in experiencing one of the most personal, heart-wrenching video game narratives I’ve played in years, Heaven Will Be Mine is 100% for you. 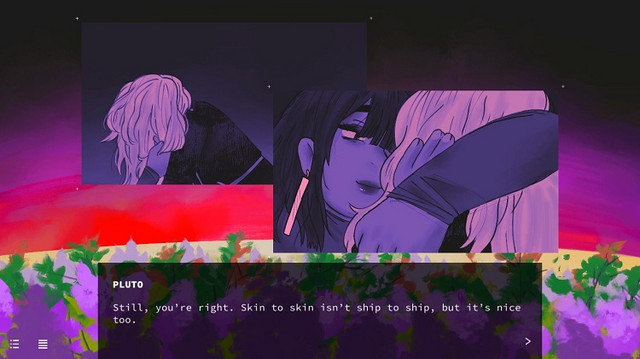 The game throws a lot of sci-fi jargon at you right from the get-go. Upon opening the game you’re presented with a wealth of flavor text, messages, and emails about Ship-Selves, Existential Threats, gravity with a capital G, and numerous factions that split and then split again. It’s a lot to take in at once. As more and more names and technical terms were thrown at me it became harder and harder to keep track of the narrative even 5 minutes into my first playthrough. Within 10 or so minutes, though, you enter your first mission as a pilot and learn that you’re not quite meant to approach the narrative of Heaven Will Be Mine with a literal or logical eye. Fights between Ship-Selves are conceptual, shaped only by the whims and desires of their pilots. Minimalist backgrounds convey the impressions left behind by destroyed colonies and once-beautiful cities. Traumatic memories appear as scribbles on a piece of paper. Ship-Selves themselves are portrayed as simplistic, toy-like paintings. It’s a fitting expression for machines designed for combat against a threat that could literally only be described as Existential. In these battles, no one dies. No one CAN die. Each mission becomes a battle of feelings and desire. The victor is not always the one who wins. It doesn’t matter so much that Heaven Will Be Mine’s protagonists are all fighting as much as it does why they’re fighting at all. 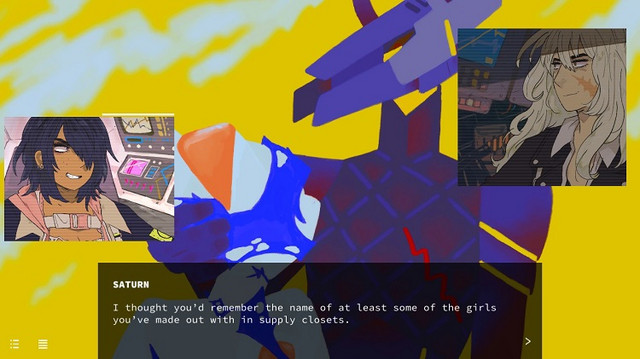 I can’t stress enough how astoundingly well-crafted Heaven Will Be Mine’s cast is. Lead artist Mia Schwartz’s attractive character designs and lead writer Aevee Bee’s thoughtful dialogue and characterization mesh perfectly to create a fantastically nuanced cast of characters. There’s Saturn: the hotshot troublemaker, Pluto: the prodigy, and Luna-Terra: the veteran. Those are their archetypes, but over the course of each of their ~80 minute playthroughs they display much more depth and charm than I can convey in a simple review. The histories between these characters date far beyond the opening minutes of the game, and each one’s unique perspective brings with it more pieces to the puzzle that is why their relationships fell apart in the first place. Who were they? Who are they? What do they want to be? Why do they want to be? DO they want to be? It’s these questions that drive each interaction forward and make the tender moments they share together far more valuable than any focus on military factions or how cool mankind’s future machines of war could be. I felt that Saturn’s route left something to be desired, but maybe that says more about me than it did her. After all, Saturn felt like a stranger to me, but in both Luna and Pluto I found both shades of myself and of someone I once knew. 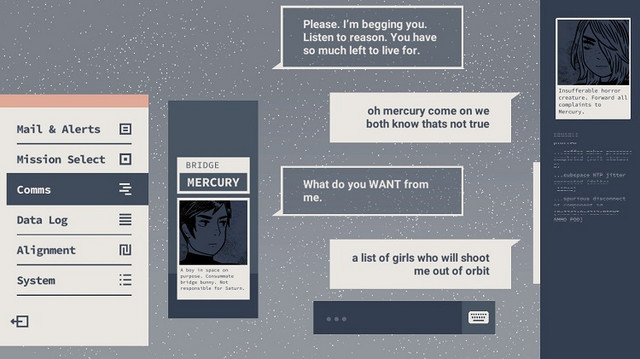 Ultimately, I think that’s the thing that'll make or break the game for you. At its very core Heaven Will Be Mine is an extremely personal story. It’s about relationships. It’s about how they fall apart and come back together. It’s about IF they can fall apart and come back together. It’s about trauma, isolation, and acceptance. It’s not a queer love story, but it’s a queer story about love. Not everyone will get the same thing out of it because not everyone CAN. And yeah, not everything in Heaven Will Be Mine quite worked for me. For one, its exposition was much too wordy. By my second playthrough I found myself skimming through most emails for anything that interested me. If I hadn’t played through all of the game in one sitting I would’ve likely forgotten half of the terms and names thrown at me upon returning. Saturn’s sense of humor and general sense of expression in chat logs felt a little too jarringly like browsing through my Twitter timeline. Pluto’s harsh red UI became a quick strain on the eyes. But in the end, none of those details really mattered to me. Since my 4 hours with Heaven Will Be Mine ended, I've wanted to do nothing but gush about it. The things I saw reflected in the cockpit glass and the things I felt while playing it were real, and I’ll carry them with me for some time to come.

+ Deeply personal story that hits all the right notes

+ A hauntingly intense soundtrack that strengthens every scene

---
Danni Wilmoth is a Features and Social Videos writer for Crunchyroll and also co-hosts the video game podcast Indiecent. You can find more words from her on Twitter @NanamisEgg.
Tags
heaven will be mine, games, danni wilmoth
« Previous Post
The 5 Most Loved and Hated Psychics in Anime
Next Post »
Keep Your Favorite Superheroes Close with My Hero Academia Phone Cases
Other Top News
1 Comment
Sort by:

QUIZ: Nothing but Net Sports! Which Club is Right for You?!