HANEBADO! shows us how easily an athlete can fall out of love with a sport 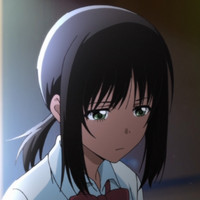 As a kid, I was never quite able to get into sports, but I had no such problem with sports anime and manga. Seeing the game through the eyes of a passionate athlete, the complexity and unique charms of just about any sport really shone through. After I eventually found my sport writing about League of Legends, however, I looked back at many sports series with a different perspective. Even through the screen of PR, roster swaps and the rumor mill told the story of a high stress environment where predominantly young men put in tremendous hours of practice to excel. Of course, not all their stories could end in happy outcomes and if a player was identified as dead weight, the fans would quickly move in on social media.

That’s why I’ve become so captivated by the direction taken by HANEBADO!. After a rough first few episodes that seemed to be leading into the inspirational return of Hanesaki to the sport she was destined to play, the series abruptly pivoted. The new narrative is about how a highly toxic competitive environment can strip even the most talented players of their enthusiasm, and leave them with feelings of resentment toward a game they once passionately played. Where most sports series show you how a kid can fall in love with a sport, HANEBADO! is showing how sports culture can drive them to hate it, cultivating a toxic atmosphere that forces athletes to buy in or check out. 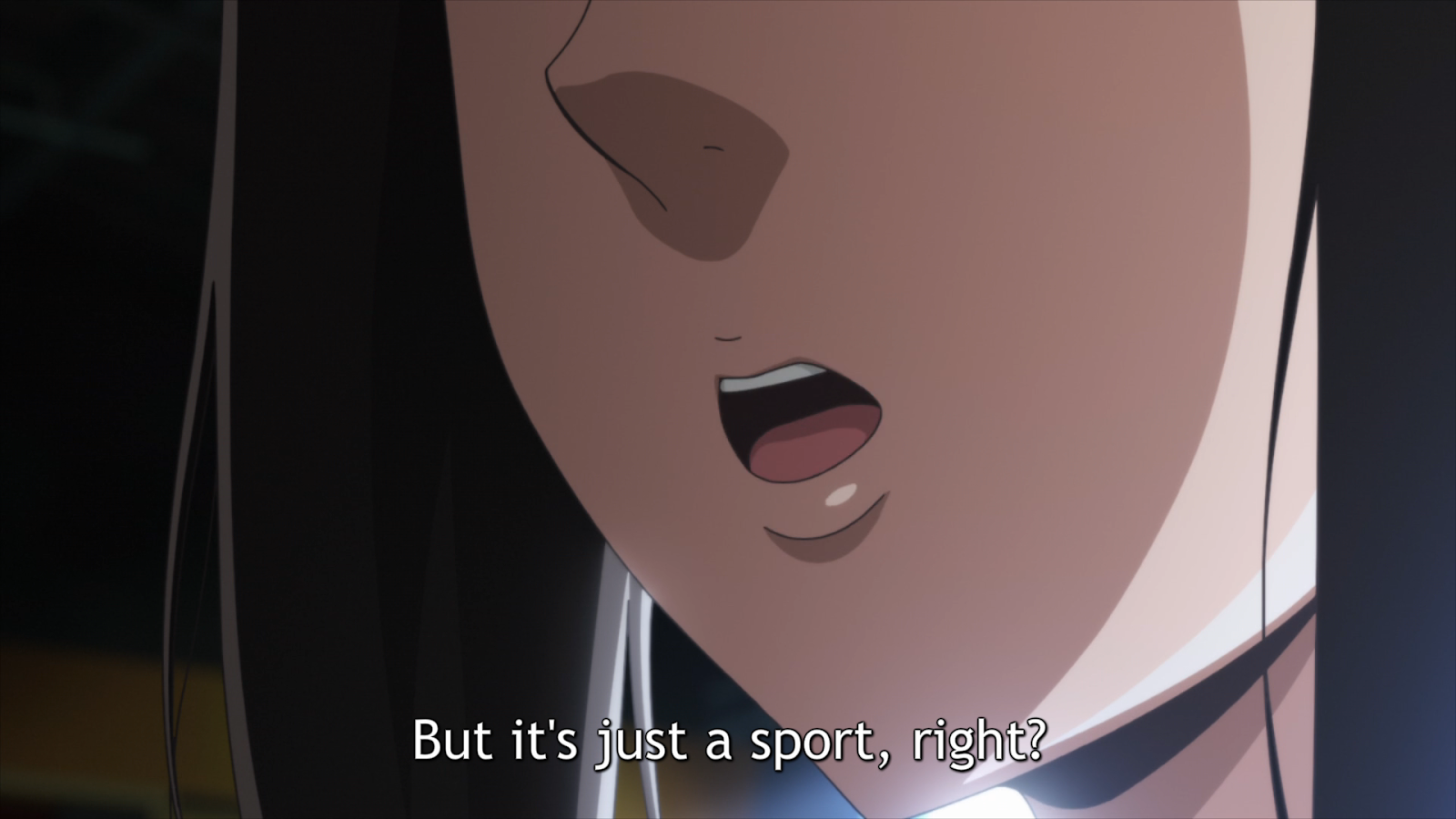 One-on-one sports are about as high-pressure a competitive game as they come. Playing on your own means the outcome rests solely upon you, there are no teammates with whom you share responsibility for a loss. You are one of hundreds, or even thousands, likely working just as hard as you each with a rare few chances to make a deep run in a tournament to make any sort of notable achievement. The truth is, the vast majority of players will lose and have to cope with disappointment. In high school sports, as college exams near the pressure rises as your number of chances to play dwindles. 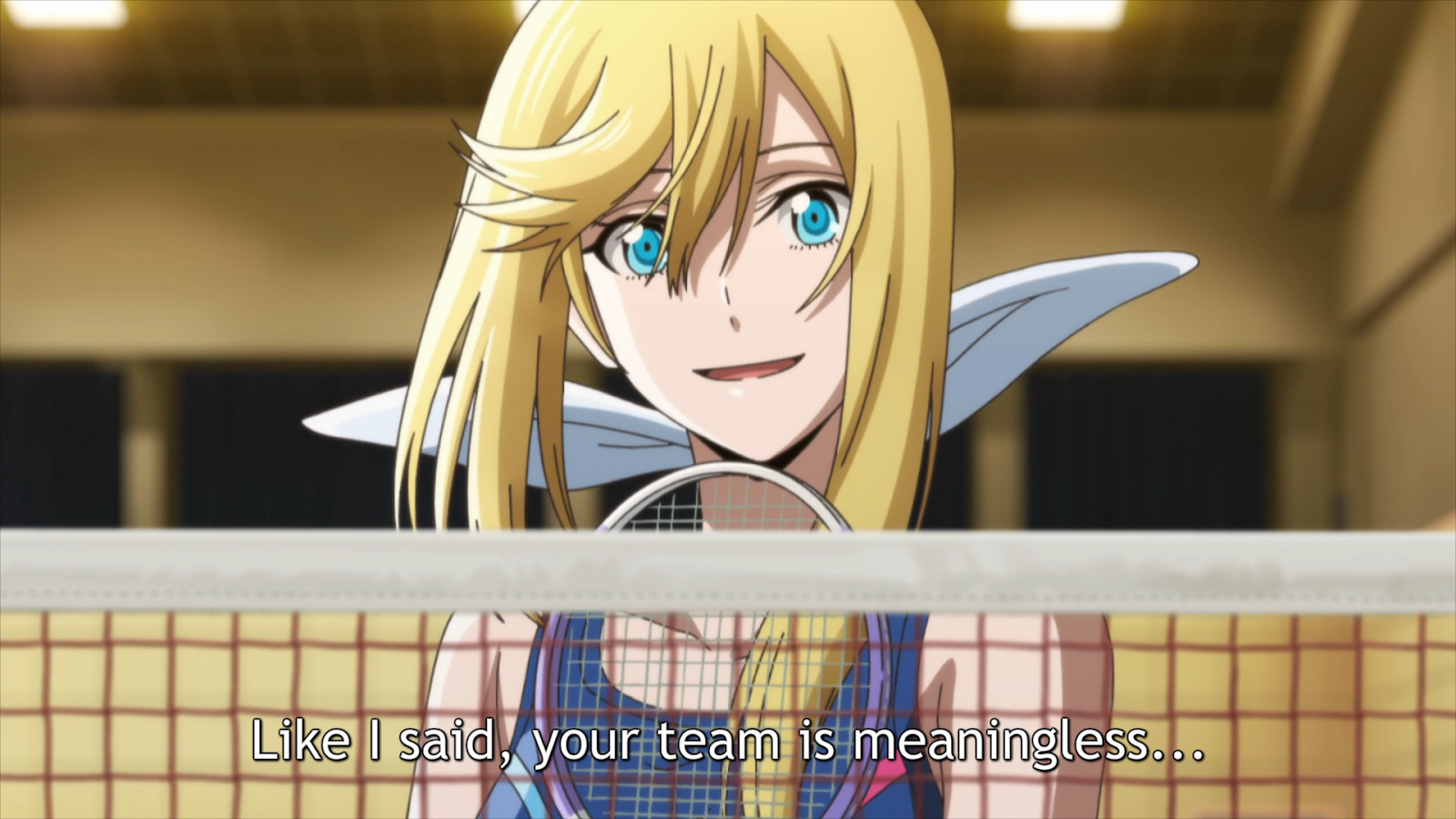 Each member of the main cast unquestionably loves badminton, but they also want to win, and HANEBADO! doesn’t shy away from the devastating experience of coming away with nothing. But even talented players aren’t safe from these stresses. Whether out of admiration or resentment, skill can isolate a player from their team. Greater performance means greater expectations and even greater pressure to succeed and leave a substantial mark on the game. Under such tremendous stress, not all of us can act our best. 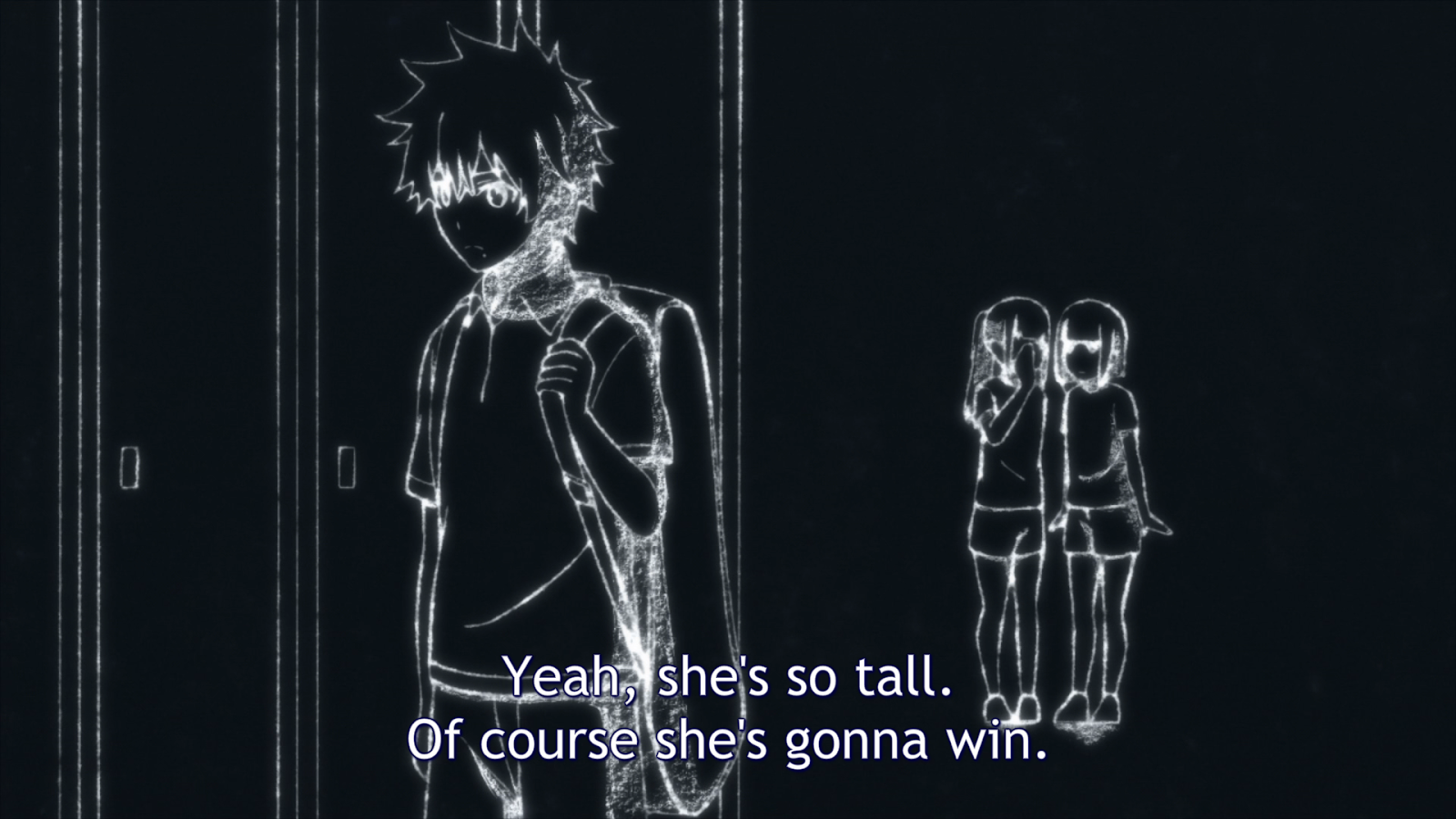 Faced with a strong first opponent in Nozomi in her final year of badminton and a poor start to her match, Izumi nearly buckles under the stress and lets the match end without putting up a performance she could be proud of. Nozomi’s own coach became so obsessed with victory he became a tyrant, training her so harshly and forcing her into a confining playstyle until the game became a chore. When she tried to play her own style, he lashed out and verbally abused her in public. 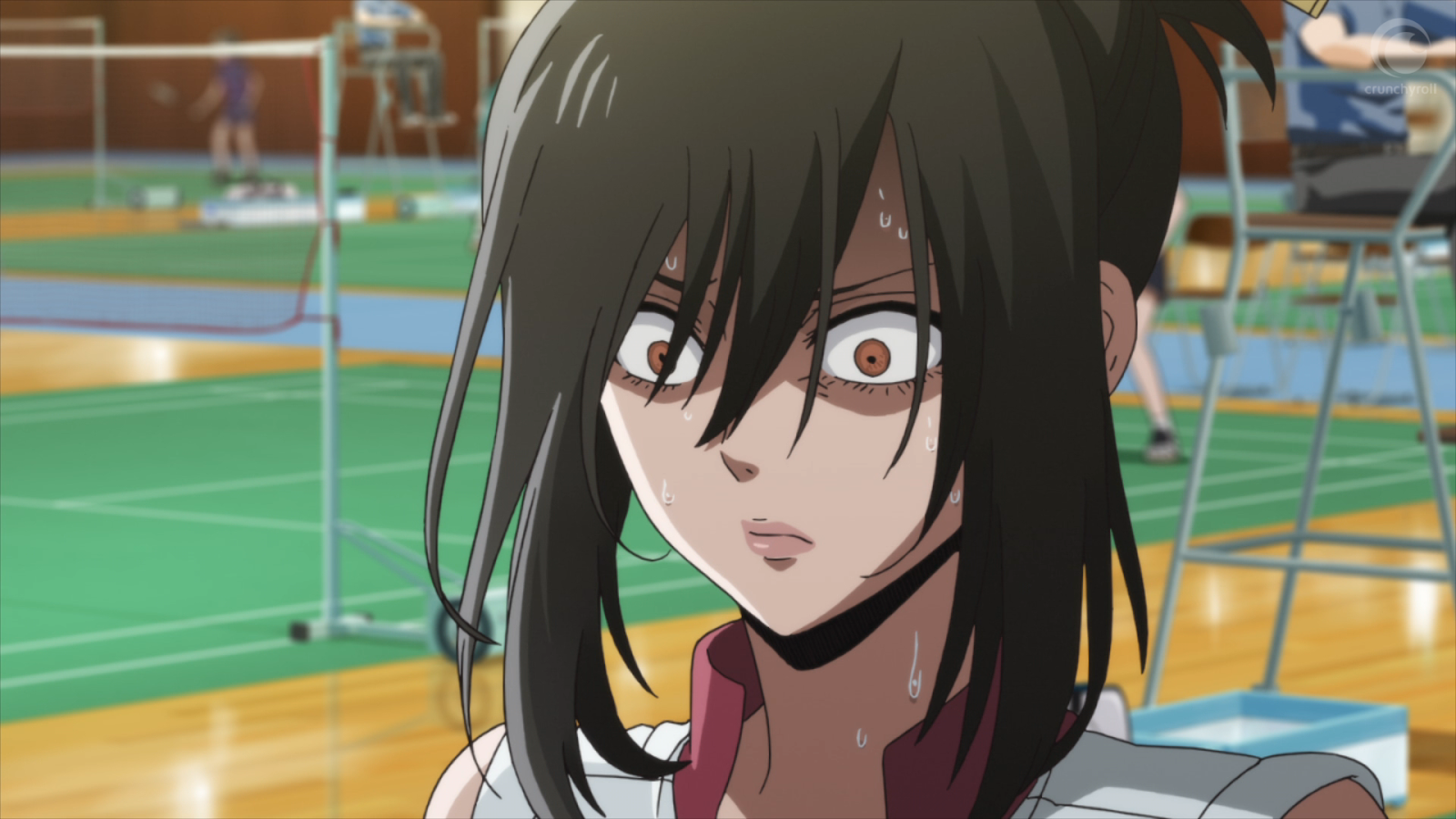 It’s all too easy to lash out under such stress or externalize our own doubts. Afraid of losing their edge by associating with their less serious teammates, Hanesaki’s rivals in Serigaya and Connie both play under self-imposed isolation and identify Hanesaki herself as an enemy rather than an opponent. Out of pure resentment or calculated strategy, they both antagonize the girl who, facing diminishing returns for her wins and a culture of individuals looking to tear her down for being the best, had already quit the sport despite winning a championship. “Hanesaki’s Play” is a brilliant subtitle for the series, putting a spotlight on how a player approaching the game with even the best of intentions cannot help the result a loss may have on their opponent. Hanesaki’s inspiration to play comes from her love and admiration for her mother. Hanesaki’s impregnable defense arose out of her desire to continue playing badminton with her mom, where allowing a shot to pass meant playtime was over. Her weak offense is the result of not wanting to score, but to keep the rally going forever. 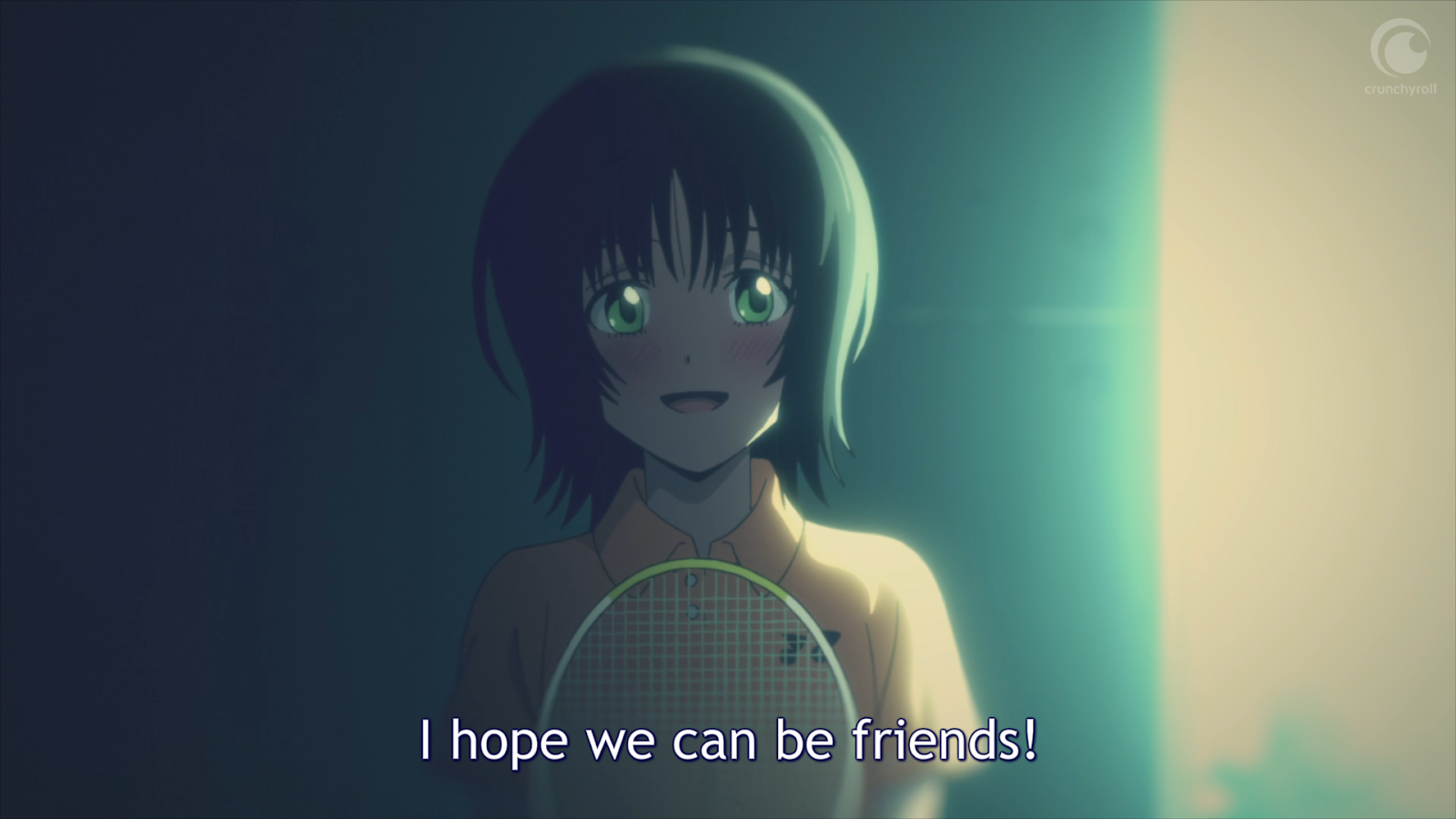 The result of this playstyle built from love is a humiliating defeat for her opponents. Rather than winning with decisive shots, Hanesaki denies everything her opponent sends at her, turning their games into extended exchanges where growing exhaustion and self-doubt slowly wear her opponent down until they are defeated by their own errors, shorting their shots or sending the shuttlecock out of bounds. Hanesaki doesn’t defeat you, she returns everything you send to her side of the court and allows you to eventually defeat yourself. 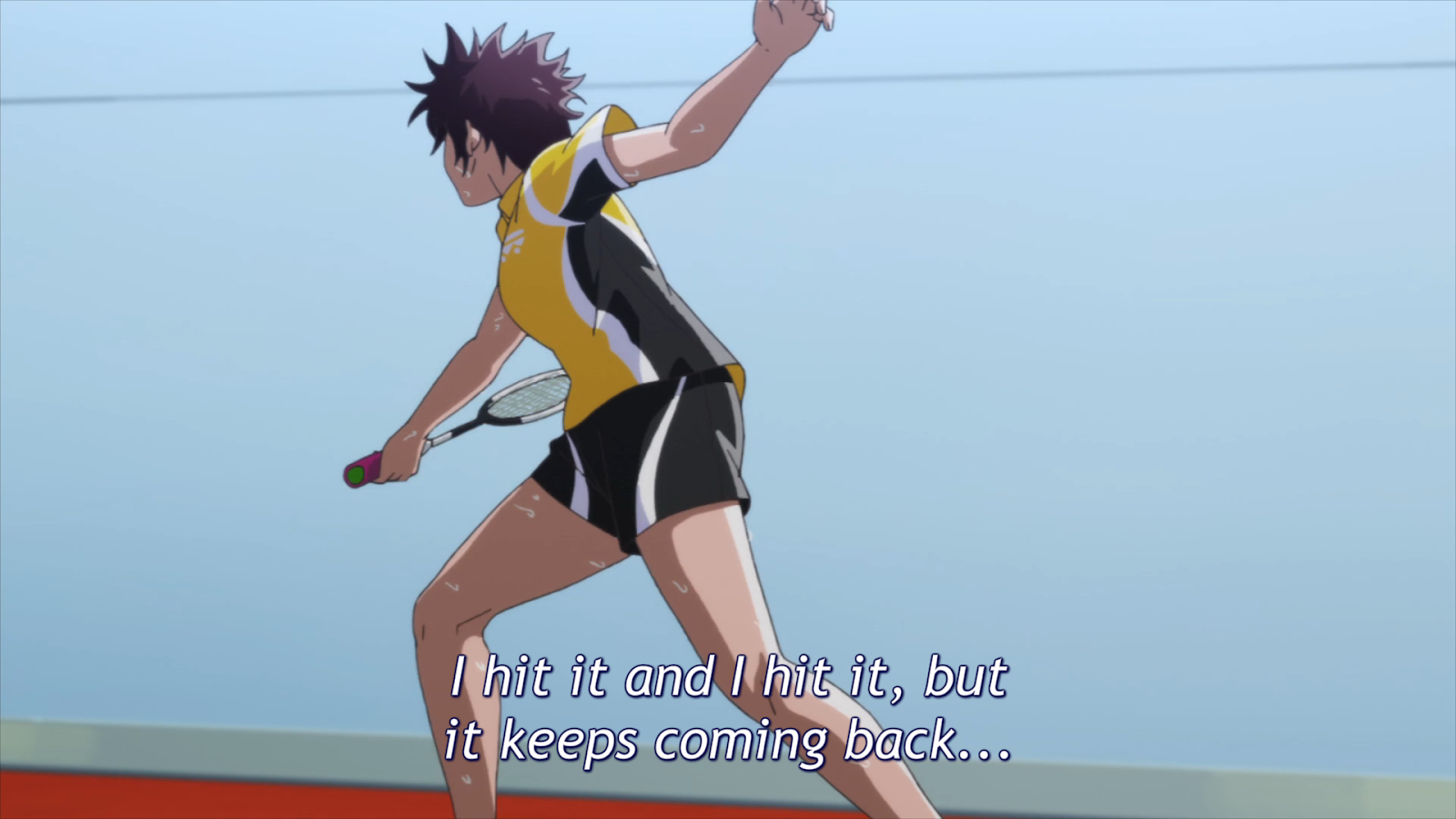 Play, an unfortunate error, or even the flow of a match can all affect an athlete just as much as the ultimate result. Nagisa develops two complexes after her match against Hanesaki, doubting the power of her smash shots after Hanesaki was able to completely shut out her best shots. She's later revealed to be chasing after even the most uncatchable shots after realizing that she could have returned the match point of their game but, too discouraged, she had given up instead. 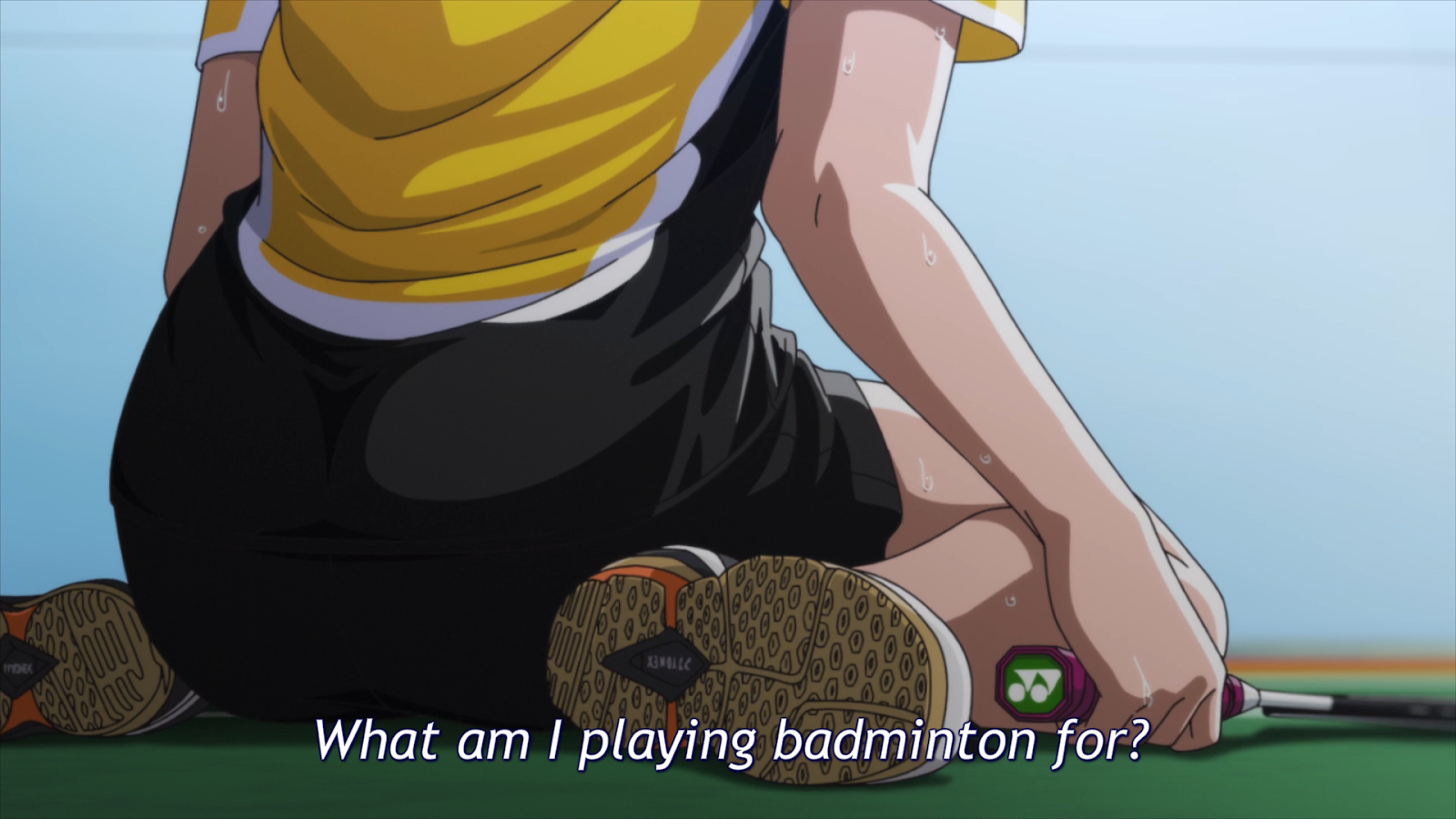 Nagisa also had to struggle with the thought that the punishing amount of self-enforced practice she put herself through may have been pointless if she’ll still be utterly humiliated by players at the highest level. Imagine putting yourself through the mental exercise of that sort of arithmetic, no matter the sport you play, facing individuals or teams who seem so above your skill level in the same league. Can the difference between you be overcome with even more practice? Is the possibility of victory worth the struggle to attain it? 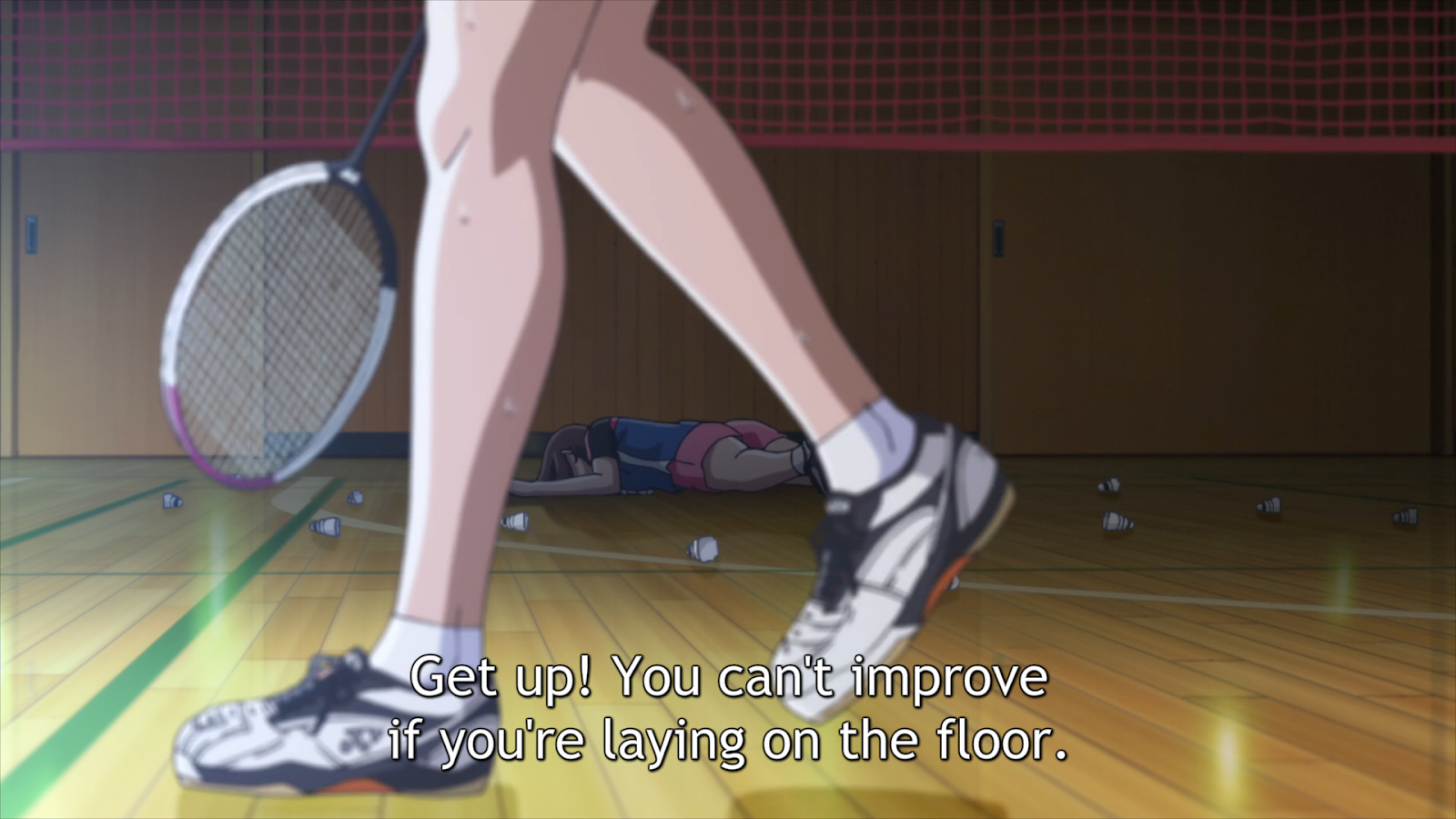 Unfortunately for Hanesaki, she isn’t even given the option of quitting. Her isolation is complete now, at the midpoint of the season. Pressured back into playing a game she doesn’t enjoy by a best friend who, not being an athlete herself, has no comprehension of the pressures she’s experiencing, and a team that appears to only want her around to improve their school's standing. Having played the sport to make friends and instead earned herself enemies, Hanesaki becomes part of the toxic environment that originally drove her out, no longer playing to win, but instead to make her opponents lose. Where Serigaya may have had it coming, it's possible that games against any of her opponents may be their last, her skill and callousness forever poisoning them to badminton. 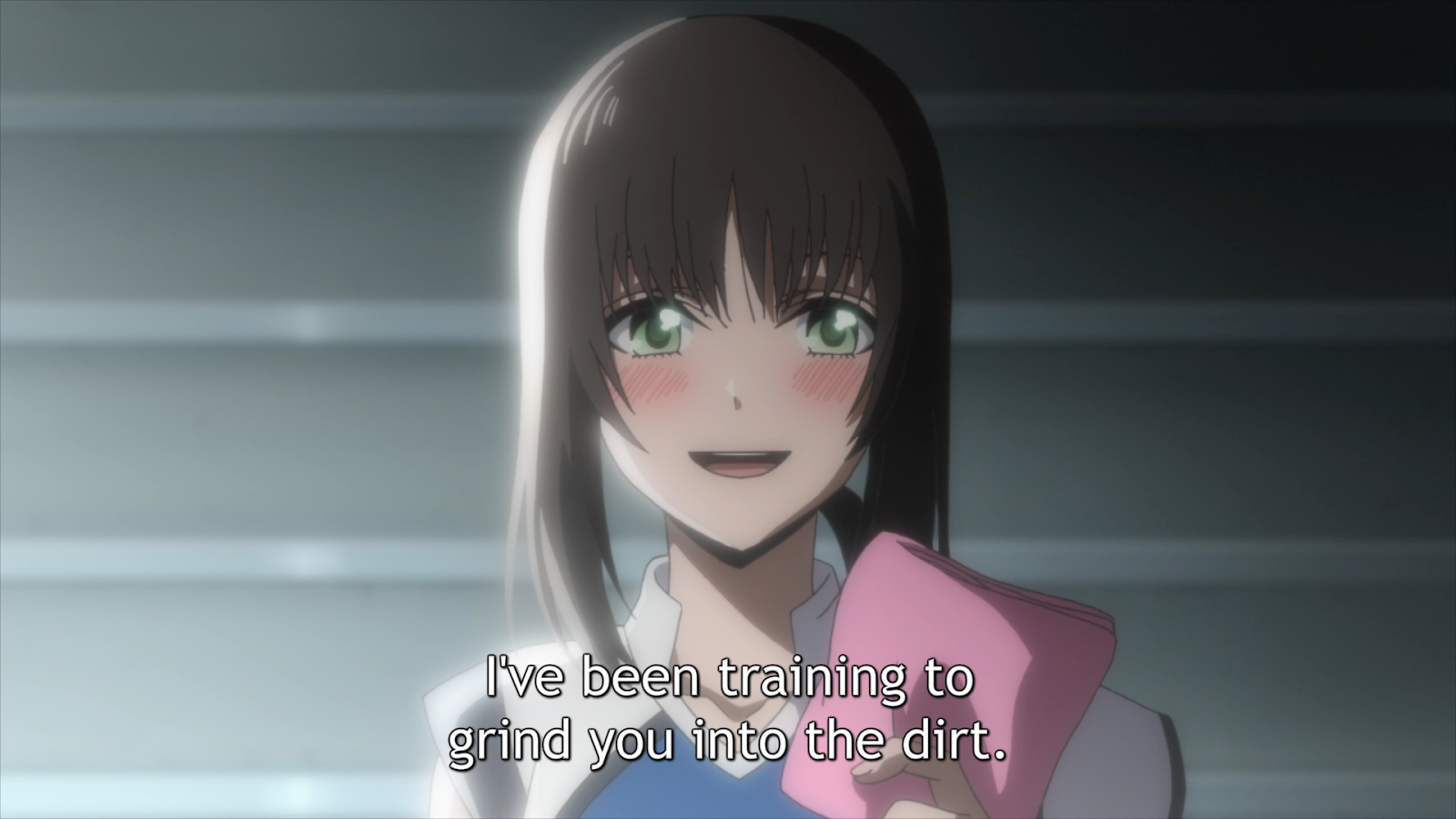 Just as harsh competition may make a sport more exciting for the audience, it might easily draw the excitement from the game the athletes play. Putting so much work into a sport with nothing tangible to show for it can demoralize anyone, but even the best may lose their love for the game in the pursuit of victory, turning their passion into a job. HANEBADO! delivers in portraying a claustrophobic stress around its matches, making each exchange feel meaningful as the girls walk a tightrope of reward and cost where a single push could drive them away from badminton forever. There may be plenty of melodrama at play, but the weight of the stress and emotional investment each player has placed in the game is inescapable.