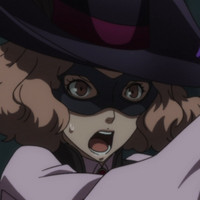 Last week was a continuation of the one before because… that’s how time works, but also because each anime has continued leaning into the conflict meant to dominate the second half. This means different things for different shows. For some, like Angels of Death and ISLAND, it means a darker turn as the story begins to show its presence. Others, like Harukana Receive and PERSONA5 are taking a brighter turn. Some anime, like the exclamation point anime HANEBADO! and Cells at Work! are a balance of both.

Anyway, yeah, that’s the theme. Light and dark. Please enjoy these clips that definitely share a theme and aren’t just my favorite moments from last week in anime!

That's right, we're starting with another HANEBADO! clip. I don’t often say “holy shit” out loud when watching cartoons, but this scene did it. HANEBADO! has been on fire the past few weeks and Nagisa’s match against Nozomi was just as hype. Nozomi’s coach was so much fun to hate and him screaming at Nozomi was viscerally upsetting. With everything going downhill with Hanesaki, it’s nice having Nagisa’s match show a player rebounding from a low point to find joy in their sport again. This particular clip though has Nagisa showing off her own special ability, hulking out and using brute force to overcome precise play. The 360 no scope backhand shot was awesome. Piss Nagisa off and she’ll bludgeon you to death with the shuttlecock.

It’s been a while since we’ve had a PERSONA5 clip up here and the last few episode had a few good moments with the introduction of Haru. I’m still a little burned we never got to see her have her “moment” in the game where each member of the team rejects the identity that society has forced upon them and choose to rebel, but added some full voice acting and animation to this scene did a lot to assuage my juvenile disappointment. I’m glad they leaned into the comedy. This may just be my personal opinion, but Haru did a pretty admirable job living up to Mona’s dream of raising his own cognitive burglar magical girl. I can’t wait for Beauty Thief to get its own anime…

Cells at Work! has been one of my favorite anime this season and my second favorite that has an exclamation point in its title. The two part battle with Cancer Cell was a surprisingly sympathetic arc given the subject matter which I really respect Akane Shimizu for taking. It’s probably the darkest the series has gotten, but still effortlessly folded in a lot of moments of levity. One of my favorite new interactions was the rivalry between NK and Killer T. Although my friend has assured me there’s no real physiological foundation for the interaction, it set up a cool little lesson of how laughter can give your immune system a boost, which means Cells at Work! is actually good for your health.

Rachel has been a reliable straight man in the psychotic murderer comedy duo of Angels of Death that, even when things got dark, it seemed like she’d bring the story back around. Not so much anymore. With Zack out of commission, Rachel seems to have decided at least one bloodthirsty killer is needed to keep the show going and has pulled out the big guns to get her way. The scene above is the most surrealistic horror moment the series has shown us yet. It’s funny because you can sort of see how the in-game puzzle must have been presented, but the direction really gave the moment some intensity and hinted at whatever darkness is driving Rachel’s quest for death.

Asobi Asobase is the wildest anime this season bar none. Maybe the most irreverent comedy I’ve ever seen and with comedic timing and artist direction that are truly inspired. Each episode is a highlight reel of faces that will provide enough material for years of reaction images. Most of all, it’s brave for venturing into the darkest, grossest corners of the psyche of schoolgirls. Since this is my first clip, I figured I should show something most representative of the show and one violating the other’s privacy to read her BL and the subsequent awkwardness when she’s discovered becoming so intense that they both wish for death. I’m sure we’ve all been there… well, maybe not the stealing BL part.

That's all for last week! What was your favorite moment that you'd like to watch on repeat? Do you prefer the tales that are taking a lighter or dark direction? What's your favorite immune cell? Let us know in the comments below!