The Top 10 Most Powerful Devil Fruits in One Piece!

Not all devil fruits are created equal, but which is the strongest of the strong? 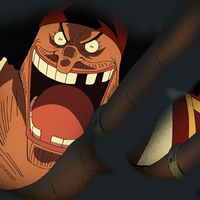 The most iconic feature of One Piece’s pirating saga is the mysterious Devil Fruits – oddly colored fruits of unknown origin that appear throughout the series. Upon consumption, they grant the eater fantastic powers, but strip away their ability to swim. A person can only consume one of these miracle fruits, and each one is unique (although they can be very similar to one another), so naturally, you’ll want to get your hands on the most powerful one if you want a good shot at being the Pirate King.

But what makes a Devil Fruit strong? Abilities can range from permanently turning your body into rubber, to granting you total control of an element. Having so many Devil Fruits out in the wild makes for some very powerful players going after the One Piece, but power is measured by more than brute strength alone on the Grand Line. Keeping that in mind, here are my picks for the 10 most powerful Devil Fruits in One Piece! 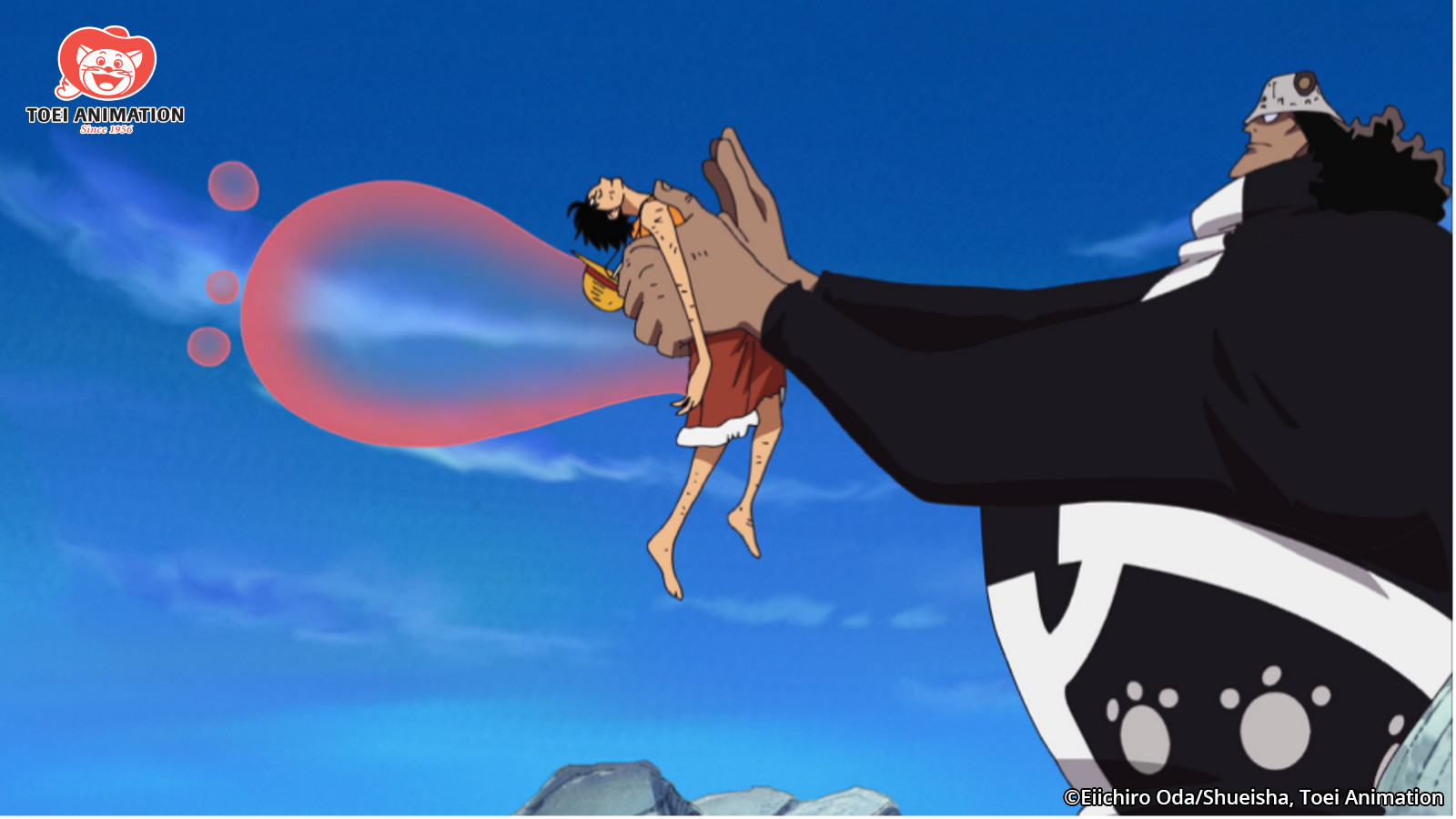 Starting the list is the misleadingly named Paw-Paw Fruit, which allows users to repel almost anything they touch, and makes cute little paws appear on their palms. A Paw-Palmed person can push away objects and enemy-attacks at devastatingly high speeds. This doesn’t only apply to solid objects: in the series, Kuma uses this ability to repel gases like the air around his hands, sending high-pressured blasts of wind at his enemies. The Paw-Paw Fruit can even repel insubstantial things, like ghosts and the sensation of physical pain, allowing Kuma to externalize his own pain and put it in someone else. 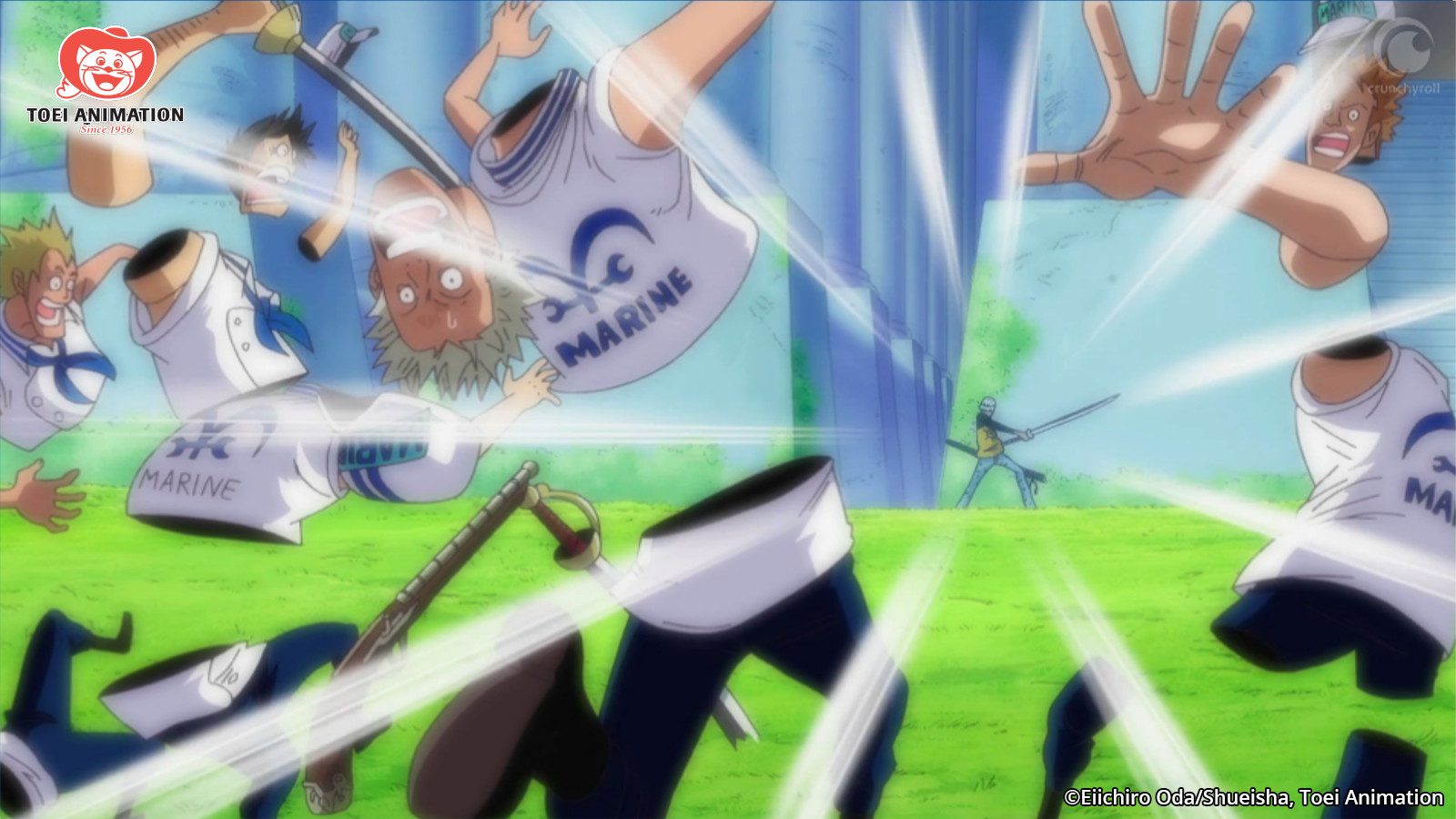 Speaking of “overpowered,” the Op-Op Fruit allows users to create a zone of influence or “room” where they have complete control of the placement of everything caught within; the dangerous thing here is that objects and people that leave the room don’t revert back to normal until the user makes it so. It’s a great fruit for Trafalgar Law, the “Surgeon of Death:”  as a doctor, he can make even better use of the space, using it to both save lives, or, on the other side of the spectrum, slice a mountain in half. The ability is even shown to transplant personalities (allowing for classic body-swap hijinx)!

But the Op-Op fruit isn’t considered valuable because of all those abilities; What makes this fruit so special is its ability to grant another person eternal youth at the cost of the user’s life. Who said power doesn’t come at a high price? 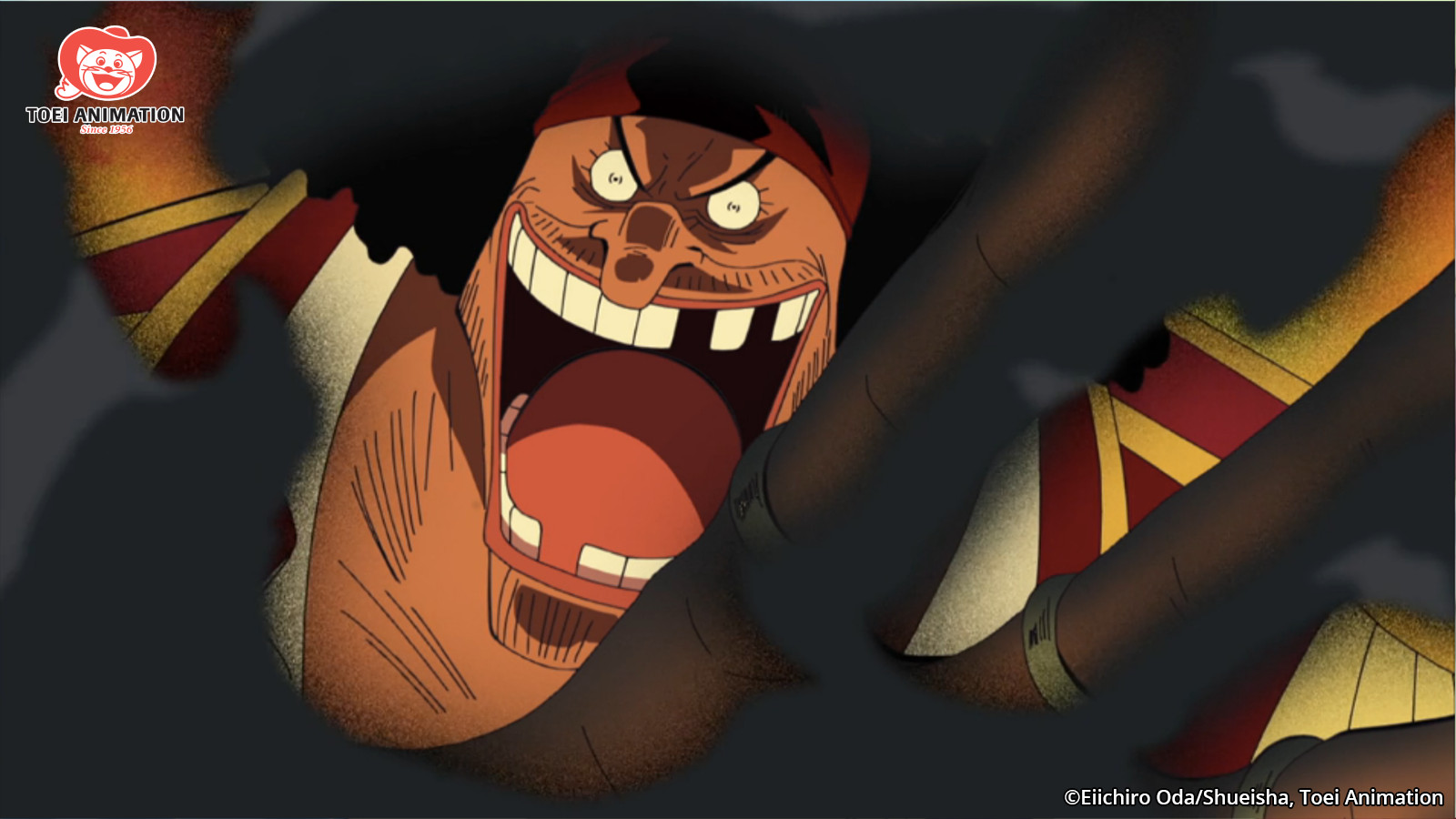 Known as the fruit with the most “evil” power, the Dark-Dark Fruit bestows the user with the power of darkness, obviously. Users of this fruit can create black holes to absorb any attack and flatten their opponents with immense pressure. Blackbeard, this fruit’s user, was able to crush an entire city by sucking it into his body, and he can store people and objects in this pocket of darkness (although living things seem to have a very bad time when exposed to it). This special fruit also comes with one other potent ability: when the user touches another Devil Fruit user, that Devil Fruit’s ability is temporarily nullified, as demonstrated when Ace and Blackbeard clashed on Banaro Island. As long as he can touch them, against Blackbeard, all other Devil Fruit users are just regular humans. 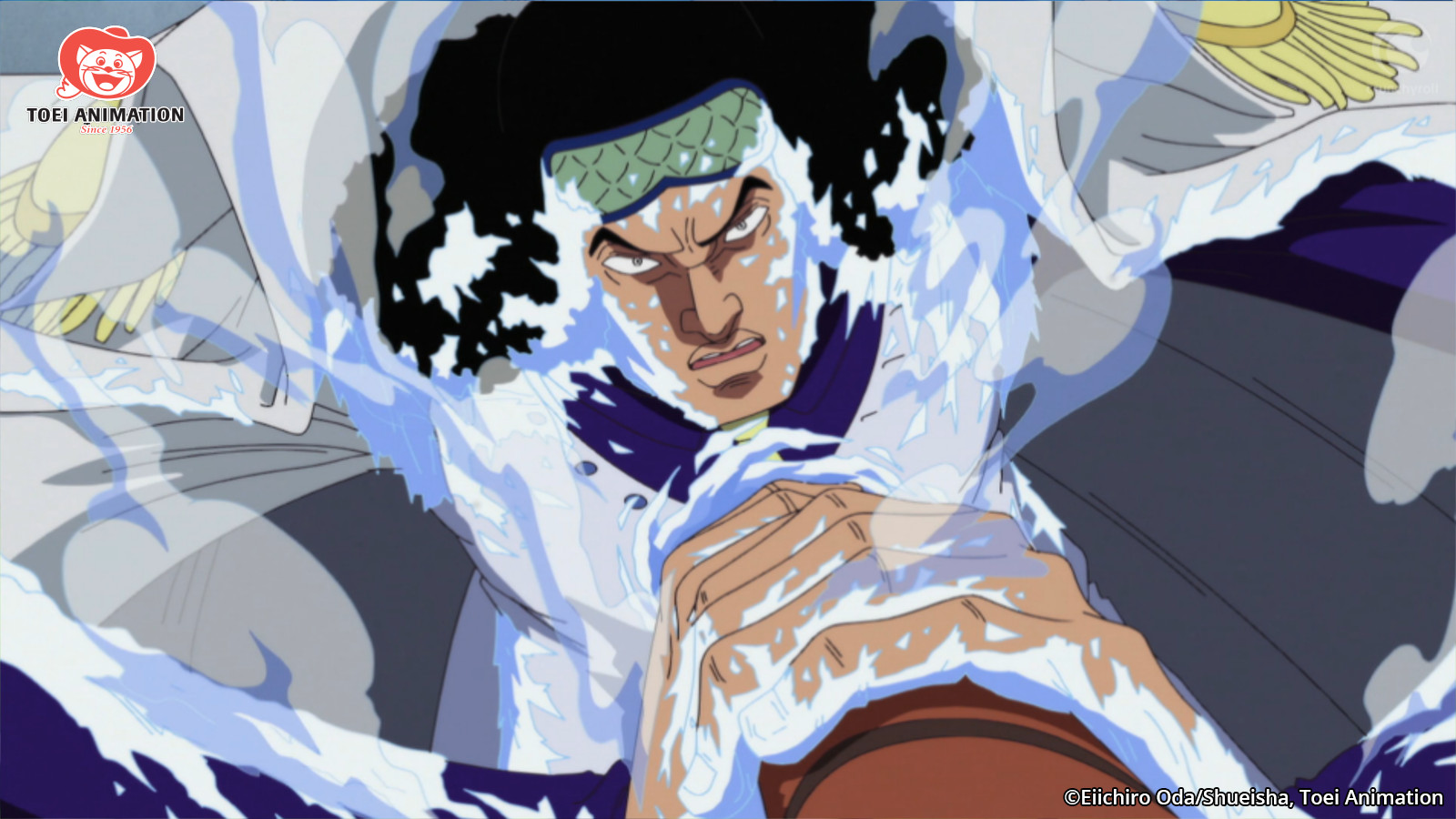 The Ice-Ice Fruit grants the user the power of Ice, which has dozens of practical applications in a story set on the open ocean! Former Marine Admiral Aokiji used this Fruit to halt an oncoming tsunami from destroying Marine HQ, and freeze a volcano to keep it from erupting. While the Ice-Ice Fruit can also make short work of enemies by freezing them solid, it’s indisputably best application is as the coolest form of transportation on the seven seas: allowing Aokiji to ride his bicycle on the ocean by freezing the surface of the water. Ride on, cool guy. 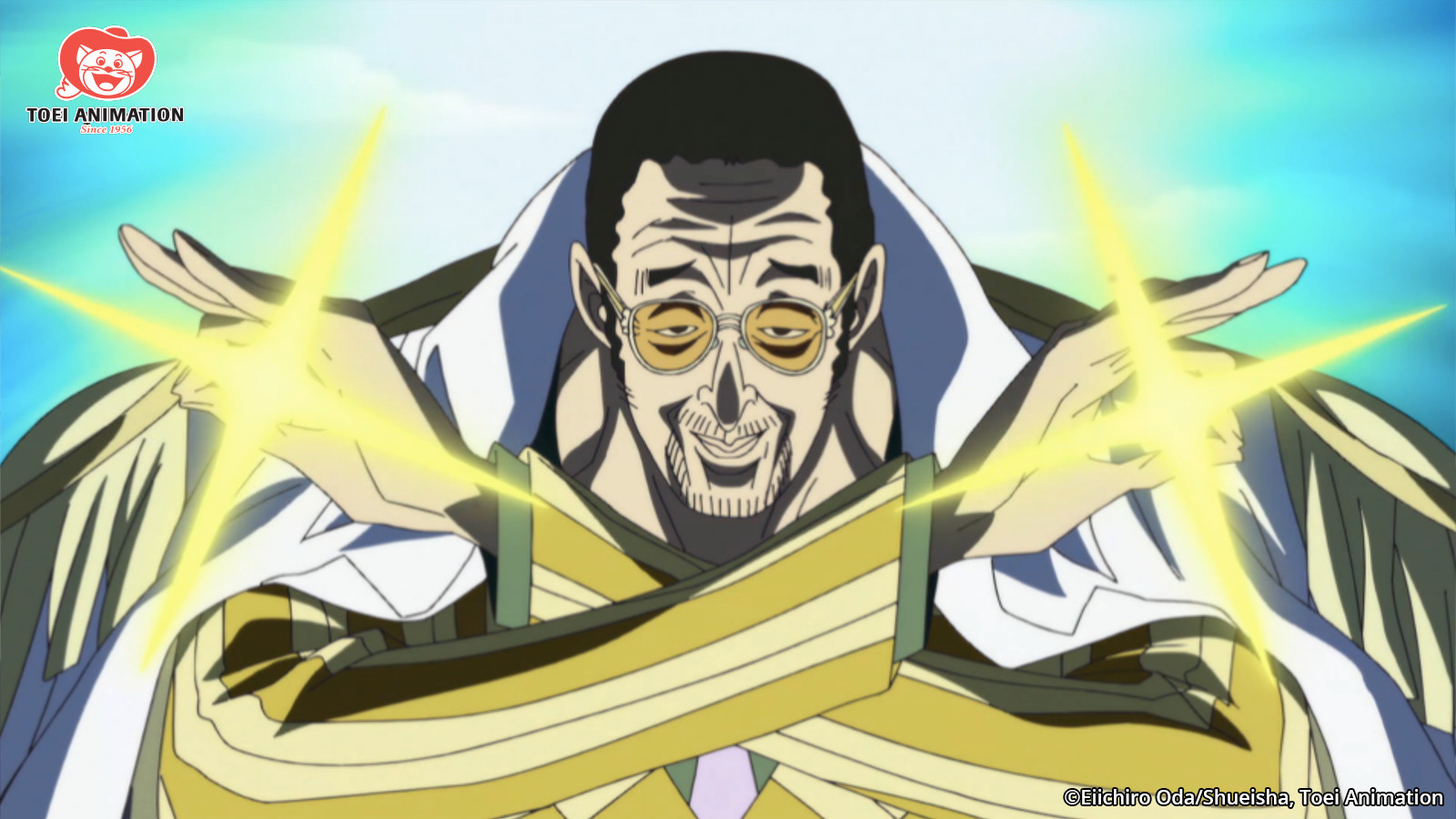 The Glint-Glint Fruit turns users into a light human, and gives them the ability to control and become light, effectively making them a Dragon Ball Z character. Admiral Kizaru mostly uses this ability to kick his opponents at the speed of light, and shoot explosive energy beams. If moving that fast wasn’t enough, he can “bounce” himself off of any reflective surface too. Oh, and for close-range combat, the Glint-Glint Fruit also allows the user to create a sword made of light, so on top of all of that, he gets a lightsaber too. That’s fair. 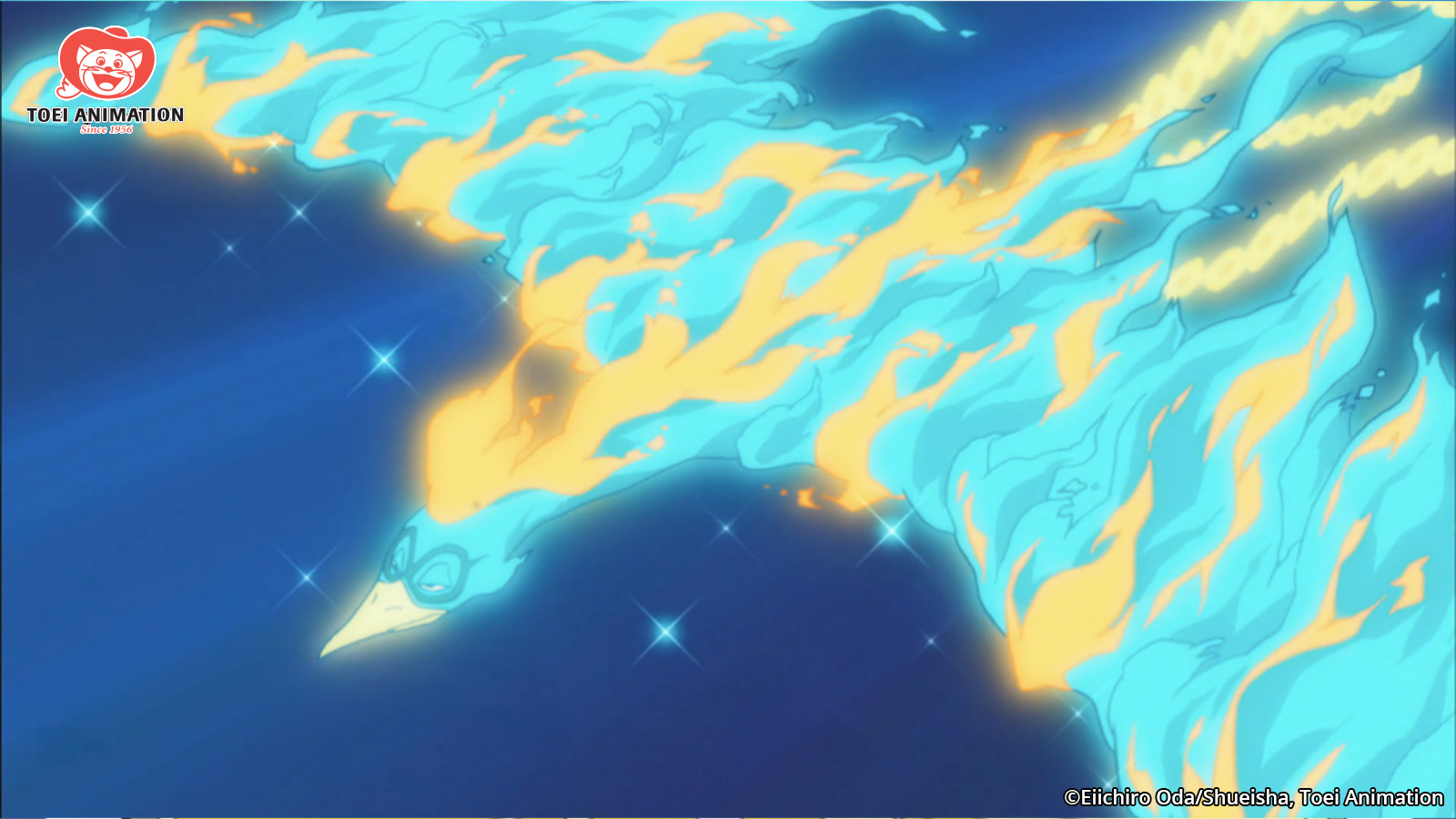 Marco’s Mystical Zoan type Devil Fruit doesn’t have an official name yet, but its power is undeniable: it allows him to transform into a legendary phoenix, granting him the ability to fly, control phoenix fire, and recover from injury. Recently it was also demonstrated that Marco’s phoenix fire can be used to heal others’ wounds too. It’s like the Swiss army knife of Devil Fruits! Marco best used this ability when he went toe-to-toe with Kizaru during the Whitebeard war, keeping the Admiral away from his captain, Whitebeard. 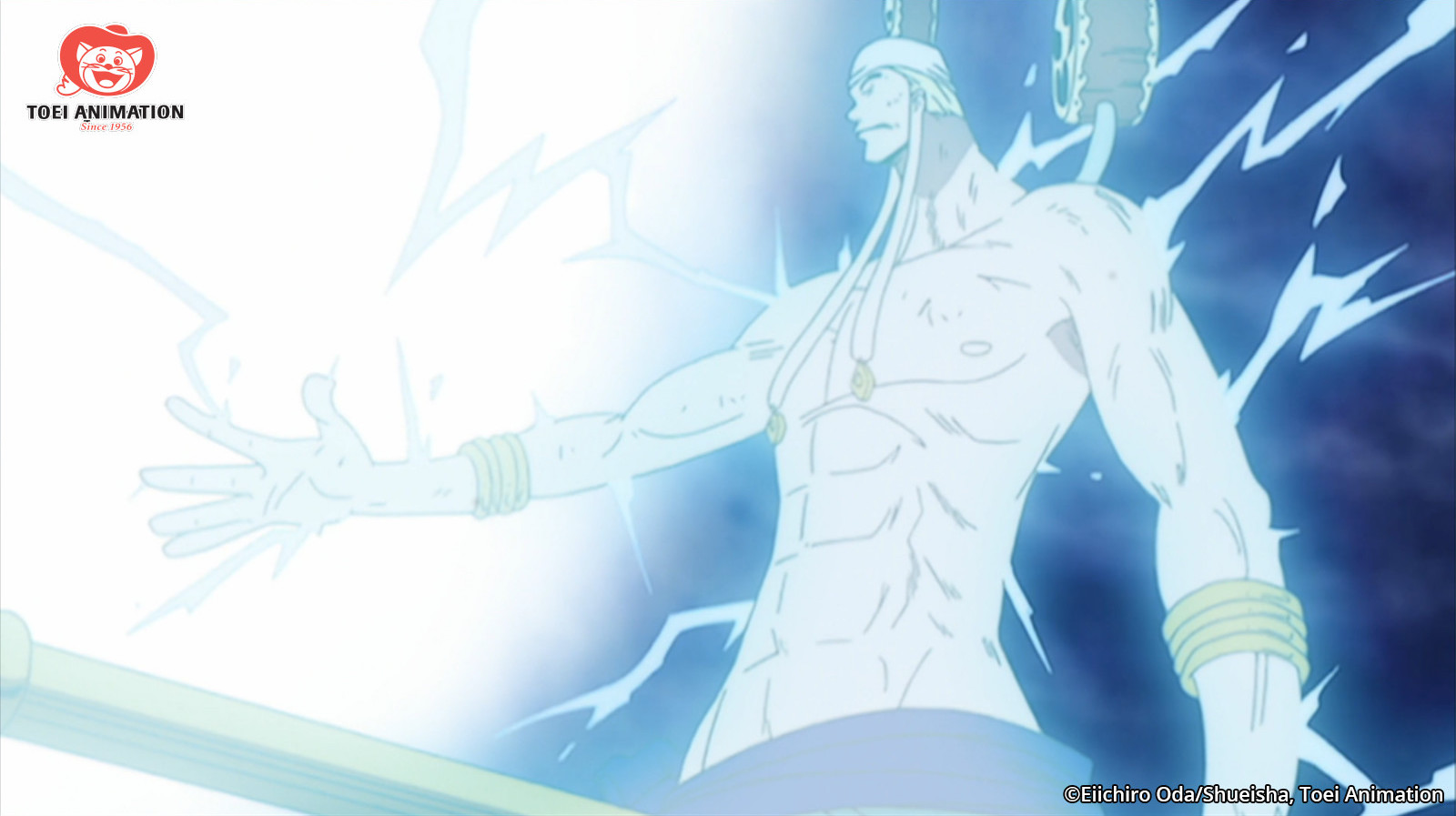 Logia type Devil Fruits grant the user total mastery of an element, and what element could be more useful than electricity? Eneru used the Rumble Rumble Fruit to zap his enemies with precise control, regulating the voltage anywhere between 1 and 200 million volts. The power also makes his body practically untouchable, and allows him to do crazy things like restart his heart by defibrillating himself. With a power like that, you’d be unstoppable, as long as you don’t run into a person made of rubber... but what are the odds of that happening? 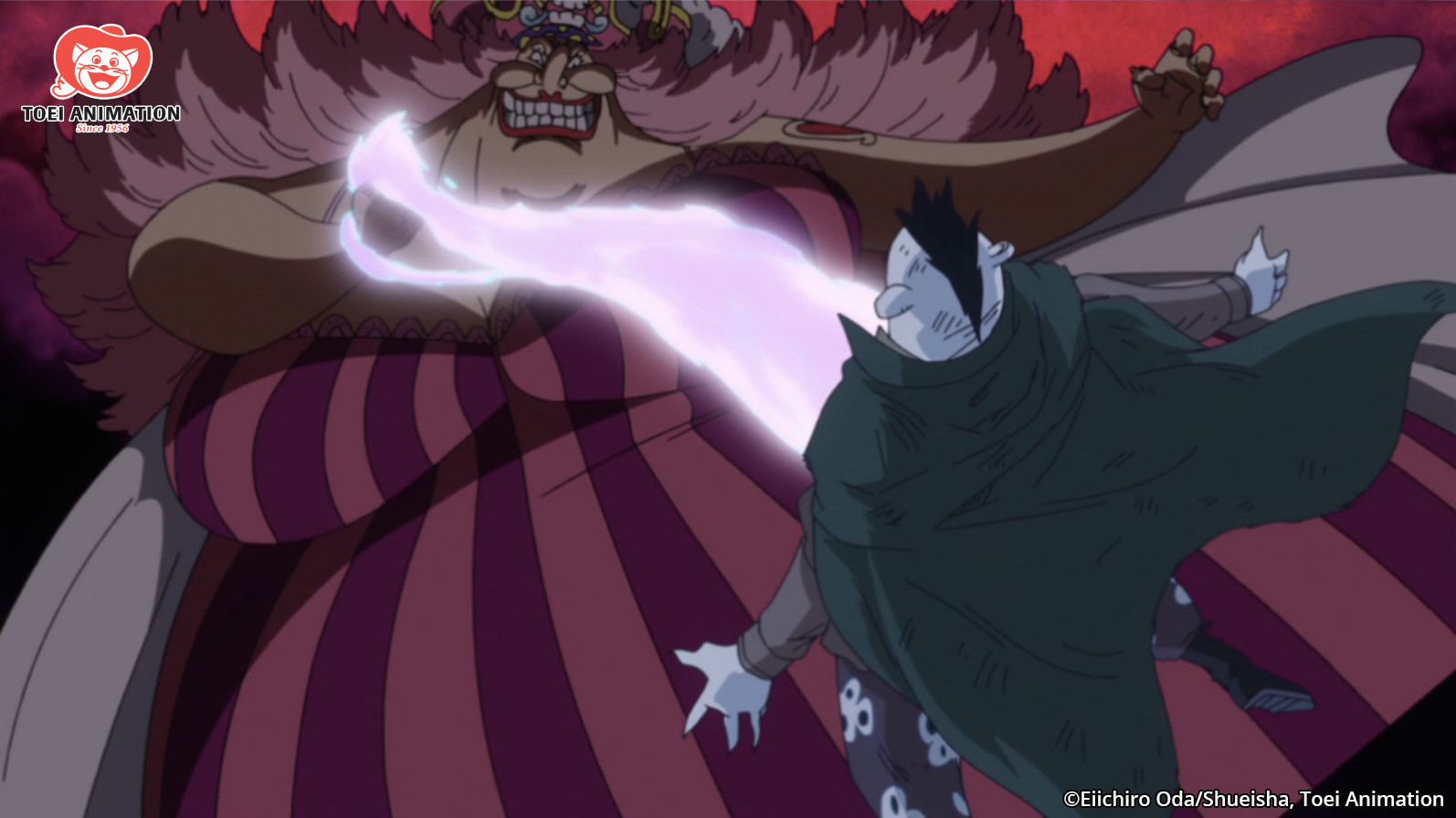 The Soul-Soul Fruit grants users the ability to manipulate souls, allowing them to reduce others’ lifespans by taking a piece of their soul, and using it to bring an inanimate object to life. Big Mom built a society using this fruit, allowing her to use fragments of her followers’ souls to create an army of servants. The only drawback? These enspirited objects have free will, which really isn’t a problem if you’re the biggest, toughest, meanest woman on the sea. Big Mom hasn’t been seen using this ability to attack her enemies directly, but she became queen of her own island, and has a huge family of loyal children, each ripe with life-force to create more loyal minions. 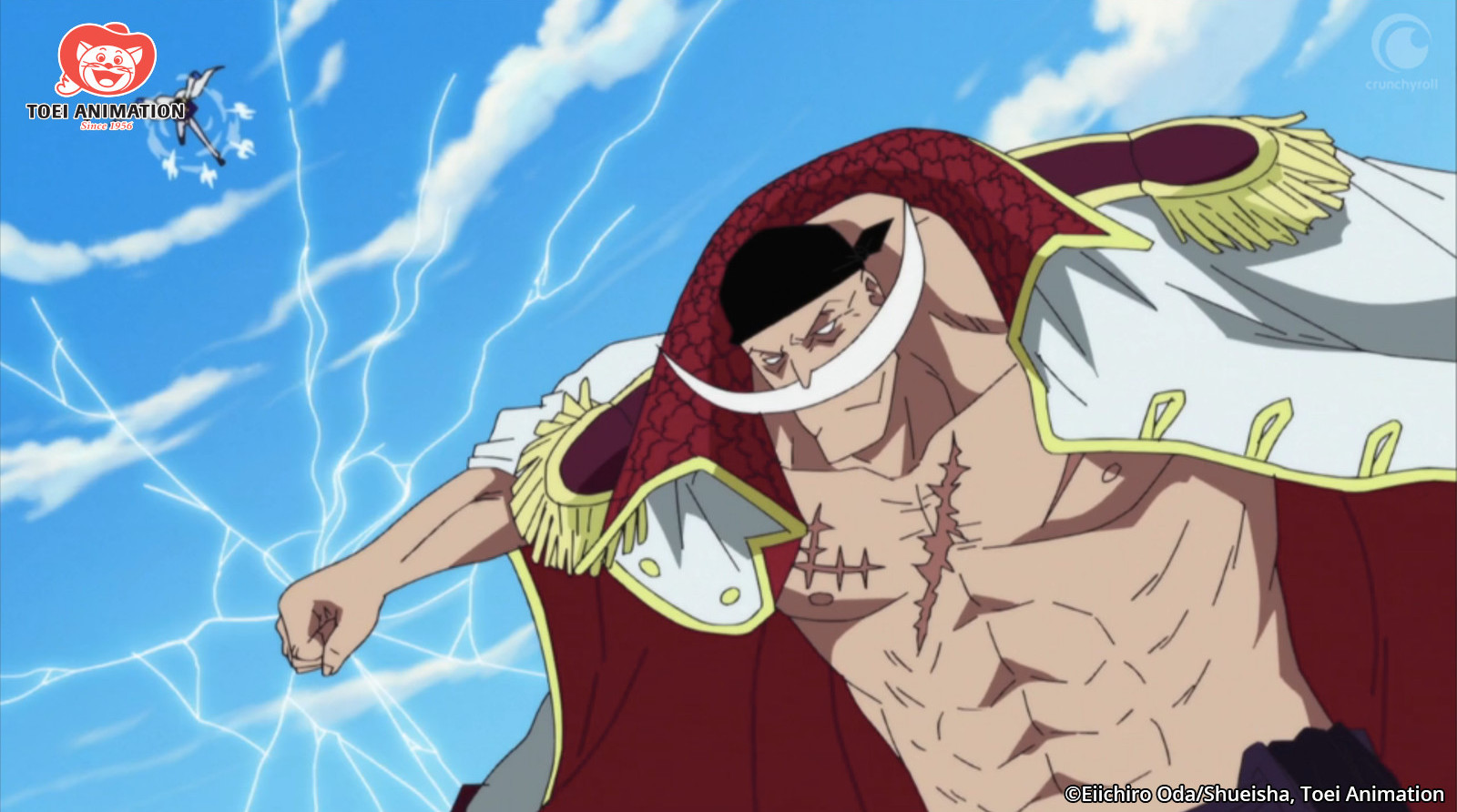 Whitebeard’s Tremor-Tremor Fruit basically grants him the ability to create and hurl natural disasters at his enemies. No really. As a “Tremor Human,” he can create powerful vibrations with his hands, causing massive earthquakes and tidal waves. He used this ability to practically level Marineford in one punch, and in a world where super-powered people can’t swim, tidal waves are a big deal. In terms of sheer destructive power, nothing else comes close to the Tremor-Tremor Fruit, so much so that it’s been called “the power that can destroy the world.” The Tremor-Tremor Fruit would easily top this list, were it not for... 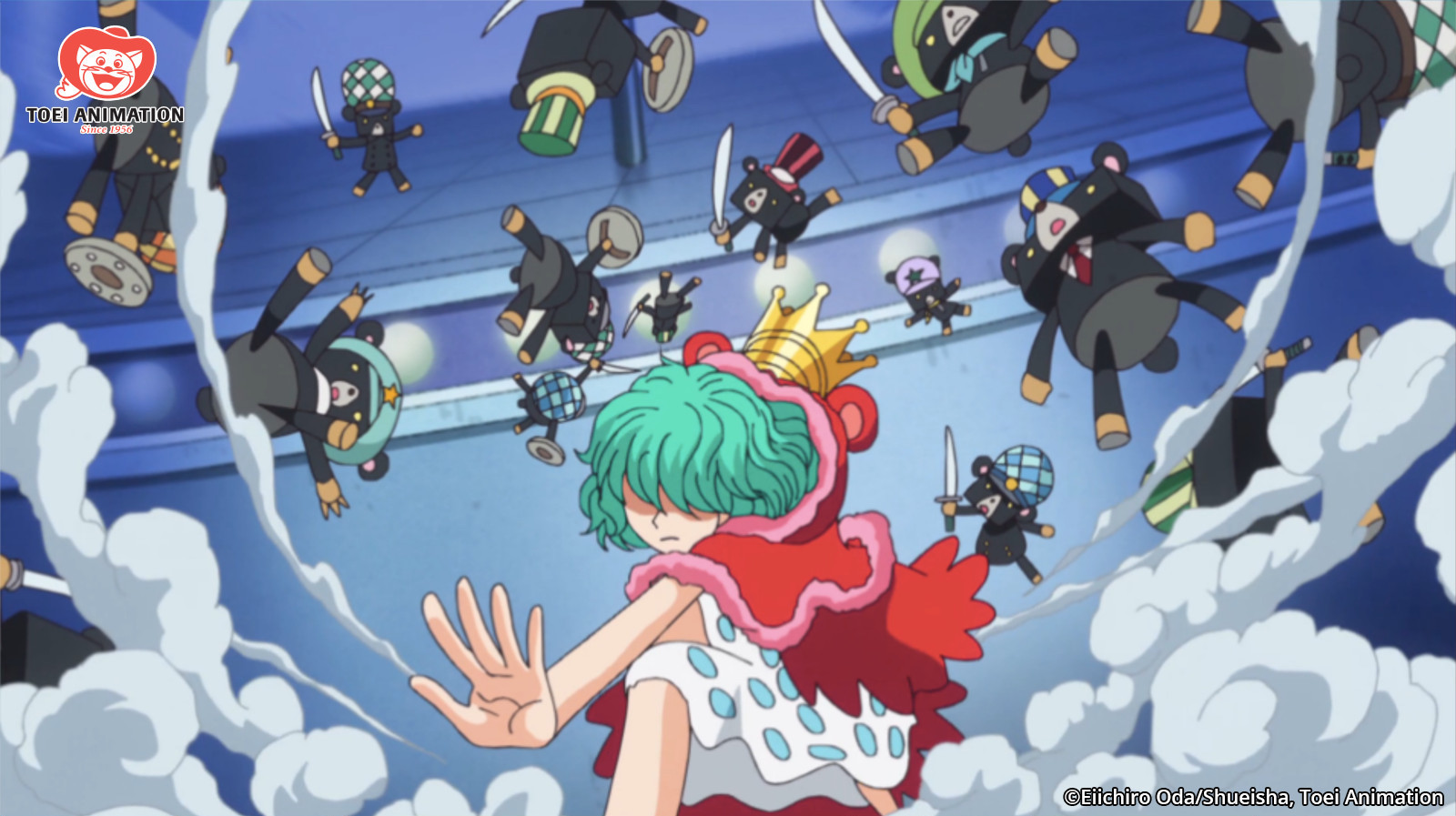 The Hobby-Hobby Fruit gives the user the ability to ruin lives. Well, more specifically, it allows users to turn whomever they touch into a toy, erasing away any memory of the person in the process. Using this power, Sugar created a caste of subservient toy citizens in Dresrossa, some of whom were forgotten by their friends and loved ones for over 14 years. On top of that, once turned into a toy, the victims enter a contract with Sugar where they’re forced to obey her every order.  All Sugar needs to do is catch her opponents unaware long enough to touch them to turn them into loyal servants for life. Sure, it’s not flashy, but in terms of “power”, the Hobby-Hobby Fruit is the most life-altering and devastating Fruit we’ve seen to date. 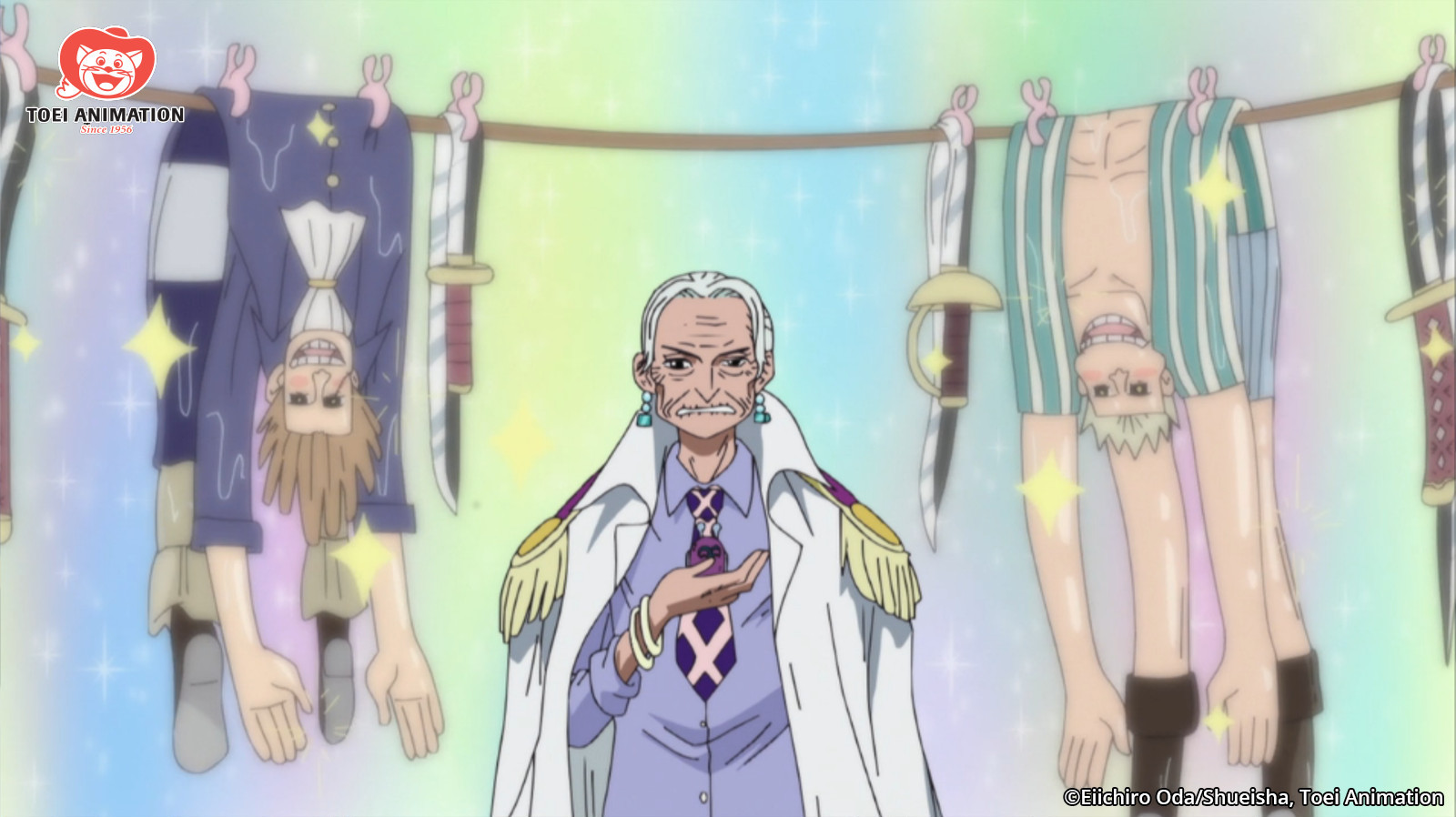 We’ve talked a lot about destructive forces on this list, but is that really all there is to power? Truly, the most powerful Devil Fruit is the one that can change hearts and minds: Tsuru’s Wash-Wash Fruit. This quirky fruit grants the tough old marine the ability to fold and hang her enemies out to dry like laundry, cleaning their hearts in the process. Eiichiro Oda has even stated that it’s a particularly potent ability against pirates, as it makes the victims better people, and less likely to commit crimes. You go, Tsuru. Maybe you’re the one who will finally clean up this “Great Pirate Era.”

Those were my picks for the 10 most powerful Devil Fruits in One Piece! Think you know a fruit that’s stronger than these ones? Then shout it out in the comments; part of the fun of such an expansive story is theorizing what would happen if any of these superpowers went toe to toe! And in case you missed it, you can check out my list of the best longest running gags in One Piece here if you’re looking for even more One Piece content to read.

---
Sam Wolfe is a freelance writer and video editor who can't believe you're still not caught up on One Piece. You can find Sam's unorganized thoughts in the form of a Twitter feed here.
Tags
one piece
« Previous Post
The Badminton Revenge Tour of Ayano Hanesaki
Next Post »
Vespa Brings Legendary FLCL Scooter to Life for Exhibition
Other Top News
22 Comments
Sort by: