Find a Fresh Start in Life is Strange 2, Episode One: Roads 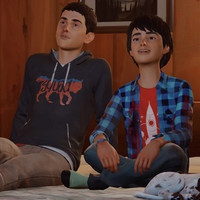 There’s a moment towards the end of Life is Strange 2’s first episode that perfectly exemplified the sequel’s direction. After a particularly stressful sequence, one of the few friendly faces I’d found pulled me aside for some encouragement. “The past is the past,” he says, quite literally gesturing toward the remnants of my time spent in the first game. Of course, he doesn’t know what happened in Arcadia Bay, nor does Sean Diaz, Life is Strange’s new protagonist. I know, though, and Dontnod knows too. It’s a clear message both for those who played Life is Strange and those who didn’t. It’s time to leave Arcadia Bay behind. Set your sights on Puerto Lobos.

The first Life is Strange released over the course of 2015 as a five-part episodic adventure series. Set in a coastal town in rural Oregon, it followed a high schooler named Max Caulfield who awakens the ability to rewind time. After using her power to save the life of an old friend, the two begin searching for a missing person. The game made waves for its tackling of heavy issues such as bullying, suicide, coming out, and sexual abuse within its coming-of-age drama framework. 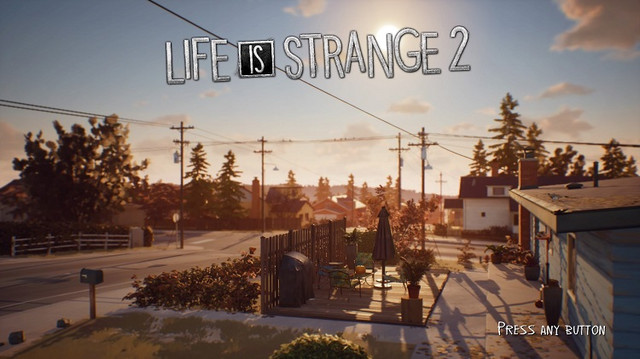 I’m a big fan of the first game, but was apprehensive when a sequel was announced. To me, the first game’s story was already as complete as it needed to be. Luckily, Dontnod felt the same way and promised that Life is Strange 2 would be something completely new. After playing the first episode (simply titled Roads), I can assure you that they’ve kept their promise.

Life is Strange 2 centers around Sean and Daniel Diaz, a pair of brothers whose quiet life at home with their dad is suddenly and violently taken from them. On their own and on the run, they decide to make the long trek from the Seattle suburbs to their father’s childhood home in Puerto Lobos, Mexico. While their journey in Roads has only just begun, their story will supposedly take place over the course of an entire year as they cross the American countryside in search of a new place to call home. 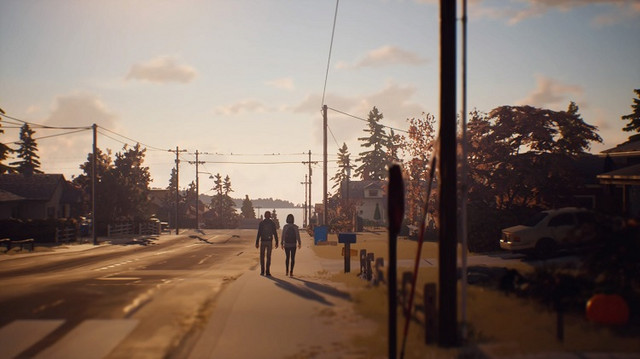 In many ways, it’s the same Life is Strange you already know and love. Aesthetically, it’s identical to the first. Effects such as wind, fire, and running water are once again animated in 2D to charming effect. Character models are rendered in the same plastic-looking style as before,and facial animations are as stiff as ever as a result. Limited facial expressions that couldn’t keep up with the voiceover work undercut more than a few of the episode’s more emotional scenes. It’s the one glaring flaw in the way this game looks, which is normally gorgeous. Much of the episode is spent in a beautiful autumn forest environment that I couldn’t help but take screenshot after screenshot of. Expect to find plenty of opportunities to sit down, listen to the soundtrack, and gaze at shot after shot of all the lovely scenery.

Speaking of the soundtrack, Life is Strange 2 features another well-curated selection of licensed songs. I have this game to blame for me listening to Phoenix’s “Lisztomania” more lately than I have in years. While I do love these licensed soundtracks and believe they add a lot to the Life is Strange experience, they give me concern over the series’s longevity. Recently, Grand Theft Auto IV had to patch out licensed selections of its soundtrack, and the Alan Wake series had to be removed from storefronts altogether due to expiring music licenses. I noticed that Life is Strange 2 has an option to turn off licensed songs, which I hoped meant would replace them with originals. Unfortunately, all it does is mute the music altogether. It’s a good feature for streamers and let’s players who need to avoid copyright takedowns on their videos, but I worry about what happens when the licenses expire. Will anyone who picks up this game a decade from now have to settle with stark silence where a poppy intro used to be? It’s not quite a knock against Life is Strange 2, but it does make me wonder. 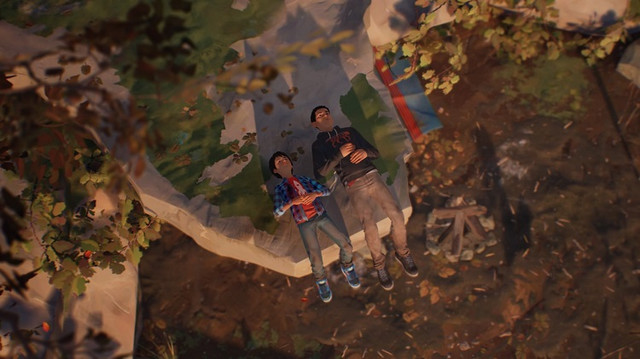 The gameplay of Life is Strange 2 is where it begins to diverge from its predecessor. You are still walking around environments in third person picking up and reading as many objects as you can, but the original’s time rewind ability is absent. This is to be expected, of course, but unfortunately there’s no actual replacement for it. This time around the playable character doesn’t have any powers whatsoever. Before, Max’s rewind ability gave her a variety of time manipulation puzzles to play with and the ability to change dialogue choices over the course of the game. Failing puzzles got characters hurt or killed, and I found myself hitting a few game over screens I needed to rewind out of and start over. If the first episode of Life is Strange 2 had any failable moments, I never found them.

While not being able to play with any fun powers is a bit disappointing, Life is Strange 2 does bring something new to the table: your brother Daniel. As Daniel’s caretaker, everything Sean says and does influences him in one way or another. By the end of the episode I had already felt the consequences of some of my decisions, and Dontnod promises that early actions will only continue to influence him as the story progresses. Moral choices are nothing new these days, but what I found interesting is how many of my little choices seemed to affect Daniel. Being a rather energetic child, his curiosity had him drifting around every scene looking for any way to occupy himself. Sean had plenty of opportunities to bond with Daniel in these scenes or to leave him be and attend to chores such as shopping or setting up camp. All of these interactions contributed to Daniel’s hunger, exhaustion, security, dependence, and overall bond with Sean, which further affect his behavior from scene to scene. 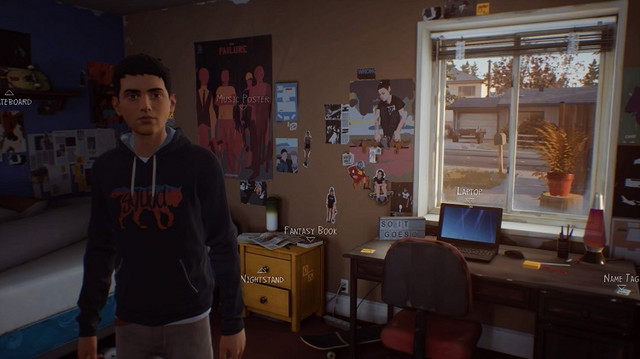 I tend to play games like Life is Strange with a compulsive need to see every single thing I can, but Daniel’s inclusion in the game changed all of that. While he never ran off and got into trouble, I was always worried he might and stuck close by. I pestered him to go to the bathroom whenever I found one. I refused to even look at toys for the flavor text because I was strapped for cash and didn’t want Daniel to hope I’[d buy one for him. He whines, but he genuinely wants to help. He complains, but only because he doesn’t understand what’s happening. He lashes out at Sean, but his love for his brother is apparent. His behavior felt believable, and I quickly found myself sinking into my role as his protective older brother.

Finally, Life is Strange 2 diverges from the first game most notably with its story and subject matter. There’s no missing person to find, no bullying ring to take down, and no town to save from disaster. There’s no mystery here, only an adventure. This is a story about a pair of brothers on the run. It’s the relationship between these brothers that drives the story forward this time, rather than the intrigue of a good mystery. The story as a whole is massively elevated by the strength of its dialogue, which is an incredibly funny thing to think for a game called Life is Strange. The first game’s attempt at writing ‘teen’ dialogue was charmingly out-of-touch, so it’s surprising to hear the teens in this game talking like actual teens. Unfortunately, the delivery often leaves something to be desired. Many of the line readings -- particularly from Daniel -- sounded rather stilted compared to the first game’s pretty solid dubbing. 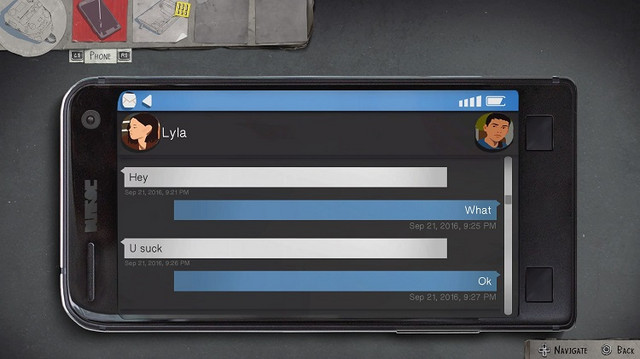 It’s also worth noting that this game is more overtly political than the last. The first moments of the episode are dated October 28, 2016, and why Dontnod set the game in 2016 instead of 2018 is immediately apparent: Sean and Daniel are the sons of a Mexican immigrant. Diving into Sean’s sketchbook reveals a reference to a recent debate on TV. “He’s not actually gonna win, right?” asks a friend of Sean over text message. Multiple references are made to building a wall, for crying out loud. The very incident that puts Sean and Daniel on the run could be ripped straight from the headlines these days. “Everything is political,” declares one character to another. It’s clear that Dontnod believes that, because this game is rife with it.

This is, of course, only a review of Life is Strange 2’s first episode. The story is far from over, so there are plenty of lingering questions. The big one is what role the supernatural will play in the story. While Sean doesn’t have any abilities, someone else does. I won’t spoil who or what kind of powers they are, but they play an important role in episode one - albeit a brief one. Whether or not they will be implemented into gameplay at all remains to be seen. I certainly hope so. 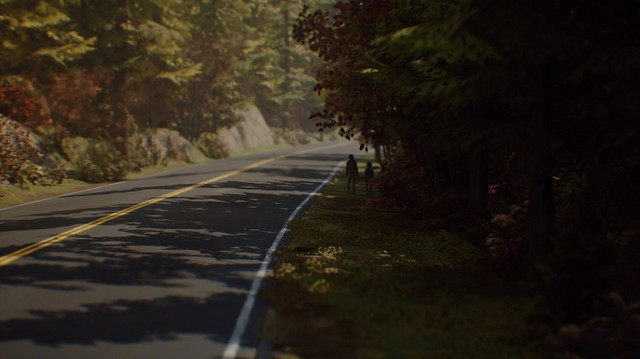 The other big question is how exactly Life is Strange 2 will link up to The Awesome Adventures of Captain Spirit, a free downloadable game meant to act as a prequel to Life is Strange 2. While Chris (aka Captain Spirit) doesn’t show up at all in the first episode, upon going back to his mini-story I found that not only is there a reference to the inciting incident in Life is Strange 2, but the previously unnamed characters Chris meets at the end are in fact Sean and Daniel. How they will link up remains to be seen, but I’m very excited to find out.

Despite all my little quibbles and qualms and comparisons to the first game, after finishing this episode, all I could think of was how good it was. It’s not the same Life is Strange as before, but I never wanted it to be. This story has already both impressed and broken my heart multiple times over. With Life is Strange 2, Dontnod is heading in the fresh direction the series deserves. I can’t wait to see more. 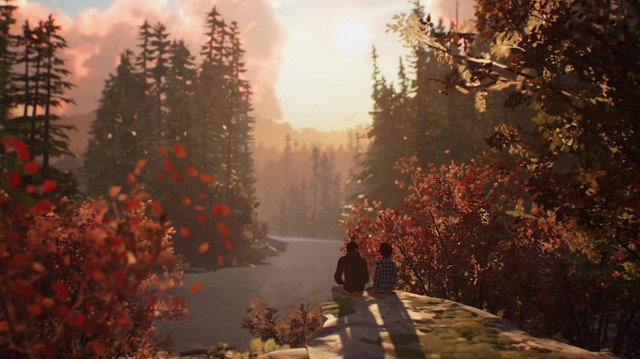 + Gorgeous visuals
+ Story that is as relevant as it is emotionally arresting
+ Accurate teen dialogue
+ Pleasantly curated and orchestrated soundtrack
+ Choices are more active than before
+/- No powers to mess around with, but taking care of Daniel adds an engaging layer to gameplay
- Disappointing absence of facial animation in key moments
- Some stilted line deliveries throughout
-----

Tags
life is strange, life is strange 2
« Previous Post
Wrap Your Mind Around an Exclusive Mob Psycho 100 Manga Sample
Next Post »
New York Comic Con: Get Ready Because Crunchyroll and VRV are Coming For Ya!
Other Top News
0 Comments
Be the first to comment!
Sort by: