With a new season of JoJo, that also means a new batch of weird and wonderful Stands to meet! 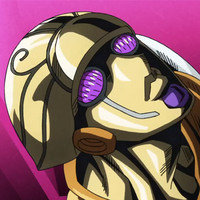 Golden Wind has finally arrived and JoJo Fridays are back, baby! Whether you’re an old hand at JoJo’s Bizarre Adventure or a new fan checking it out for the first time, this article will help you out by telling you all you need to know about the Stands you’ll see in the show!

But what are "Stands," exactly? Stands are a powerful vision created from a person's own life energy and spirit. Because it appears to stand right next to the person when they're called forth, the name "Stand" fits it to a T! Stands first appeared in Stardust Crusaders, where Jotaro Kujo was shown to have developed a Stand of his own. Joseph Joestar had developed his own Stand as well around the same time as Jotaro's, and the reason why that happened is connected to DIO being stabbed with the Bow and Arrow; when a Stand user is given a stand through the Arrow's power, all of their descendants gain the ability to use Stands as well. Since DIO claimed Jonathan's body, this inadvertently gave all of the Joestar line Stands, some of which were life threatening (which is why Holly was potentially in danger). Other users born with the innate ability to manifest stands will have them appear from moments of stress or extreme emotional states, such as Kakyoin or Avdol. Overall, Stands are metaphyiscal representations of a user's fighting spirit and powers, and each one is wholly unique!

Please note that this analysis will include some spoilers for the episodes that have aired so far, but we won’t spoil any upcoming events or reveals, so don’t worry; if you’ve watched the episode of the week, you’re good to go! For our first outing, we’ve got four Stands to take a look at: Koichi Hirose’s Echoes, Rohan Kishibe’s Heaven’s Door, and of course, Giorno Giovanna’s Golden Wind, and Bruno Buccarati’s Zipper Man, so let’s get started! 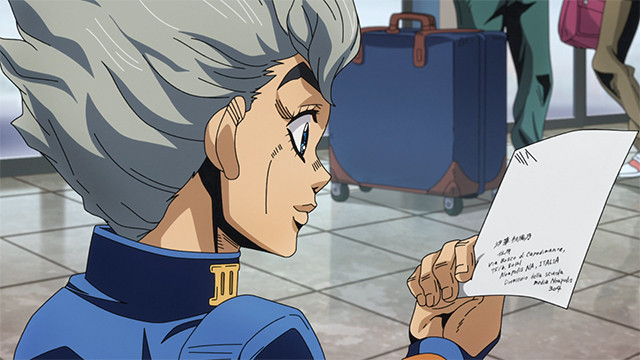 Fans of JoJo’s Bizarre Adventure: Diamond is Unbreakable likely remember Koichi, the hapless but brave member of Josuke Higashikata’s group of merry stand users. Koichi returns in Golden Wind at the behest of Jotaro Kujo, investigating the possibility that DIO has a child who might be living in Italy! Koichi is no slouch when it comes to Stand battles, and his unique evolving Stand Reverb is one of the most unique of the lot! Reverb currently has 3 evolutions named Act 1, 2, and 3 respectively, and Koichi is able to call upon any of the forms when needed.

Reverb originally appeared as an egg, seemingly without any abilities, but soon hatched into its first form: Act 1. Act 1’s abilities are mostly non-combative; it can scout up to 50 meters away from the owner, but the most unique feature of Act 1 is its ability to “write” upon any surface (including a person!). Depending on what Koichi writes, different things will occur. Writing the onomatopoeia of a sound in Katakana will result in that sound being produced, but if Koichi writes a word in Kanji, he can influence the actions and behaviors of other people. 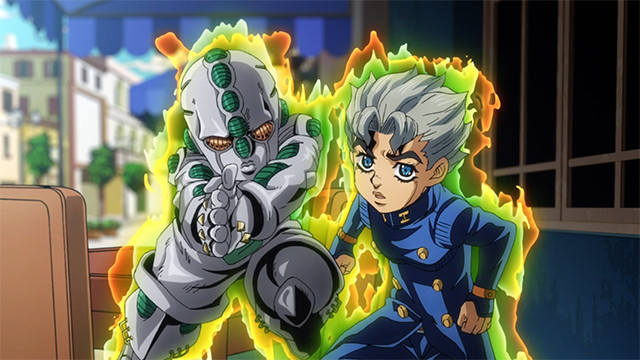 Reverb Act 2 is a bit more versatile, but can’t move as far away from Koichi as Act 1 can. Instead, Act 2 has the ability to increase the sound effects of its first form, but with some interesting restrictions. Act 2 can only “write” words with its tail, shooting them out one at a time. However, the words written have much stronger impacts, with the ability to make targets radiate heat (and even burn someone!), make things elastic, or even knock people far away from the surface of impact. Act 2 is also incredibly fast compared to Act 1, but nowhere as fast as Act 3! Compared to the previous two versions, Act 3 seems totally human, and even has a foul mouthed personality of its own!

Act 3 adds a unique ability called 3 Freeze, where it can “freeze” a target by punching it and increasing the weight the target feels. While it can only target a single thing, it is incredibly powerful, even managing to slow down and temporarily stop Heart Attack! In this episode, we see Act 3 force Giorno’s car and later himself to a full stop in the ground, before almost severely injuring itself and Koichi due to Giorno’s rebound ability. Koichi and Reverb make a formidable duo with Koichi’s quick thinking and Reverb's abilities of misdirection and unexpected direct force! 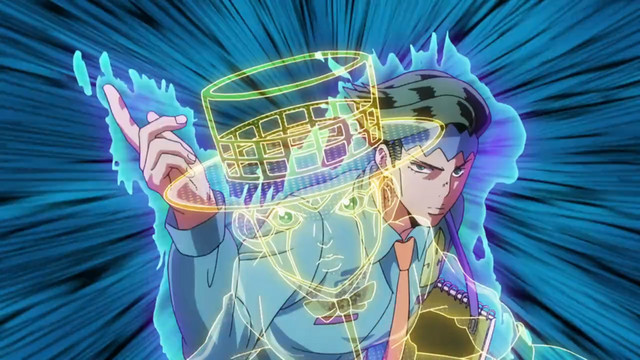 Although he doesn’t appear in the episode, Rohan Kishibe’s Stand Heaven’s Door is part of the reason the action of Golden Wind begins in the first place. While the somewhat abrasive Rohan doesn’t always seem like a team player, without the aid of his Stand’s ability of book transmutation, Koichi would likely have never encountered Giorno the way he did; thanks to Rohan, Koichi was fluent in Italian without ever needing to learn a single lesson. Rohan’s Stand has the ability to turn people into “books” that he can then read, edit, and even add notes and intructions to!

While originally this made Rohan seem like an antagonist, his abilities became particularly helpful to Josuke and company, and continue to be so here; by “writing” in Koichi’s book, Rohan made it so he could fluently speak and understand Italian. Rohan’s abilities aren’t limited to people, as he can influence and read ghosts and even animals; while it may seem like a pretty nosy ability, Rohan’s stated it’s come in quite handy for manga ideas and deadlines, but that doesn’t seem to be an excuse… 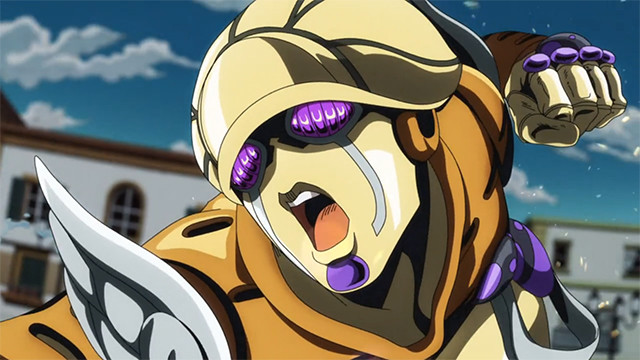 Next, we have Giorno Giovanna’s Golden Wind! From the initial mid-episode status card, Golden Wind seems oddly weak for a Stand, especially one wielded by someone with the mixed bloodline of DIO and Joestars, but that’s only if you’re looking at the surface level stats on Golden Wind. Instead, it might be correct to say that with the right application, Golden Wind could be one of the strongest Stands ever! In the first episode, we see that Golden Wind has the ability to transform objects and materials into living matter, whether that be a frog or a tree. Giorno has little control over the behavior of the things he brings to life, as he is genuinely surprised that the frog returns to him when it does, and warns Leaky Eye Luca that the frog isn’t attached to him, nor can he control it. Similarly, Giorno “rides” the growing tree to escape Koichi, but he has little direct control over it; he’s simply riding the tree as it grows taller, rather than making it go where he wants.

But a potentially even more impressive ability, and the one that could make Giorno so strong, is the fact that anything brought to life by Golden Wind, if attacked, reflects all of the damage done to it back on its attacker with the same force! This result turns out to be quite unlucky for Leaky Eye Luca, who ends up doing himself in with his shovel strike to the frog, and lucky for Koichi, who looks not to kill Giorno but simply stop him so he can ask him questions. However, what happens if Giorno has Golden Wind attack a human directly? The effect isn’t what you’d expect! Instead of pummeling his opponents with a barrage of strong, destructive attacks, Golden Wind instead seems to “speed up” the target’s mind, while in reality slowing their body and reaction time to a crawl. Giorno’s attacks seem a bit more powerful than an average human punch, but if you add in that your target can’t move or react on top of that, and it means a whole lot of “average” punches could get dicey real fast! 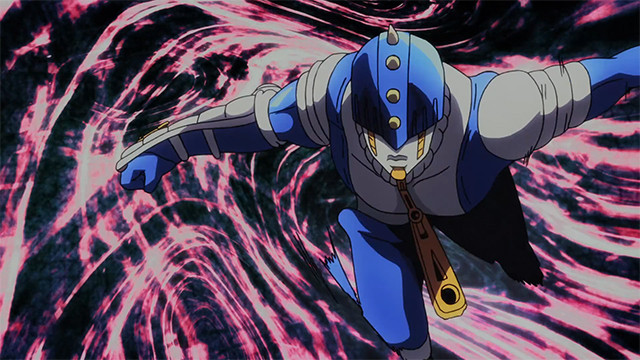 Lastly, we have Bruno’s stand Zipper Man, and it is certainly a unique stand! Zipper Man allows Bruno to create a “zipper” on any surface he desires, the inside of which connects to a seemingly endless pocket dimension that he can manipulate, placing objects inside of people and things if he likes, or even hiding himself inside of something or someone else. Bruno is also able to “unzip” his targets, such as when he attacks Giorno initially and nearly unzips Giorno’s head from his body! Bruno can also use Zipper Man to travel around various locations and physical places, even those that might seem impossible at first, such as his easy and quick exit from the train car while fleeing Giorno.

Zipper Man can create some interesting situations, some that even backfire on Bruno himself; when Giorno “unzips” his own arm to extend his punch range, Bruno accidentally gave his opponent the benefit he needed to attack him! Bruno’s power, much like Giorno’s, seems to focus on manipulating his environment and the things around it to his benefit, such as when he swaps arms with the young man to trick Giorno, escape from the train, place Luca’s fingers in Giorno’s mouth, or simply disorient and disturb his opponent, Bruno’s Stand helps him accomplish his mission through trickery and strategic planning rather than brute force. Overall, it seems that Zipper Man is perhaps a bit physically stronger than Golden Wind, although as it turned out, Bruno should have taken his own advice and not focused on physical attacks, but tricky movements and outmaneuvering his opponent! 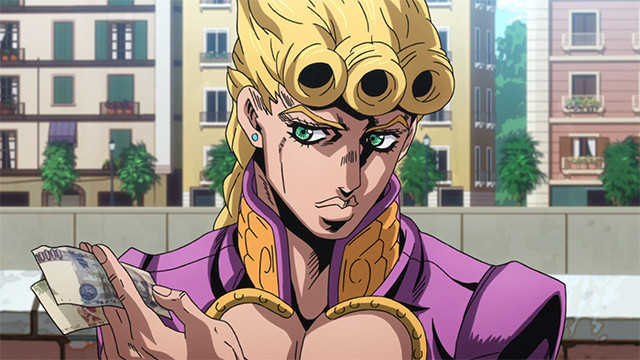 The Stands of JoJo’s Bizarre Adventure make up some of the most fun and memorable moments in the show, but their powers can sometimes be confusing or unclear on first notice. We hope this helped you keep up with your knowledge of Stands, and even if you already knew a lot, perhaps you learned something new! What Stands will we meet next? Make sure to tune into Golden Wind each week so you don't miss out! Until then, make sure to practice those Stand calls and poses, and see you next time!

What’s your favorite Stand that has been shown in Golden Wind? Have a particular Stand from a previous JoJo’s series you’d like us to cover?  Let us know in the comments!