Spirals can kill? How can a shape haunt a whole town? Wait, can a spiral haunt a cake? Asking for a friend 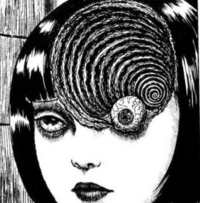 Juni Ito is a master of horror, and you can see some of his best stories come to life in the Junji Ito Collection. One of his most famous creations focuses on an entire town's obsession with one thing--the shape of a spiral--and shows how it tears them apart, literally and figuratively. As Halloween draws closer, we have to come up with some spooky things to eat, so what's better than the regular Swiss roll cake that pops up in so many anime? A few small changes to the normal recipe are all that's needed to create a truly horrific food masterpiece.

If you've never had a Swiss roll cake before, it is essentially a long, flat cake that's bee rolled up into a spiral and filled with cream. The unique cake is made by baking a thin slab of cake, then turning it out and rolling it up while still hot. As it cools, the cake keeps the swirl shape it was rolled into, and you then go in and fill it with all manner of things. Mostly it's cream and fruit, but in the case of this cake today, we just used cream. 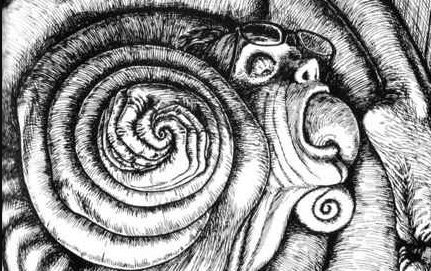 In this town, everything slowly starts to turn into spirals... which eventually leads to death for many of the characters, and really awful situations for everyone else. I mean, imagine if a snail man crawled into your classroom? As an actual teacher, this would be a literal nightmare for me. 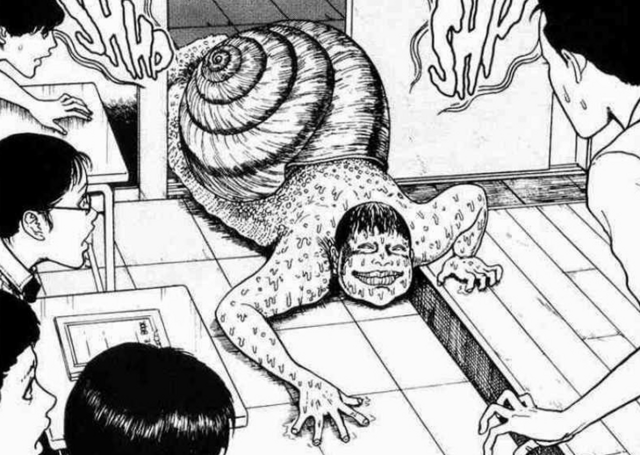 In order to evoke the feel of the spirals in the manga, I decided to dye the chocolate cake black. You can use black cocoa powder to acheive a really dark brown cake, or you can use black food dye like I did. It all depends on what you have available to you. The cool thing about this cake is that it's a lot easier to make than it looks, so you can impress all your friends with the technique of it, while you sit back and watch them eat FEAR ITSELF. 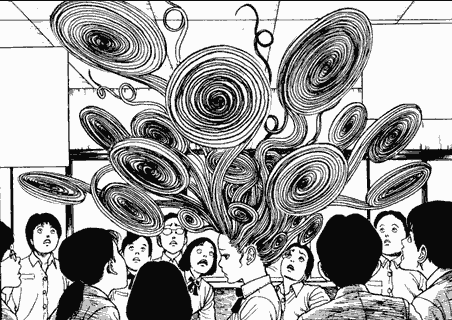 If you haven't read Uzumaki or seen the Junji Ito Collection, why wait? 'Tis the season for spooky anime! In order to make the cake, watch the video below to see the full process.

Ingredients for the Spiral Cake of DEATH

Adapted from the Pioneer Woman's recipe

To Make the Spiral Cake

2. Place eggs and sugar in a bowl. Heat up an inch or two of water until it is steaming in a pot. Place bowl over steaming pot (bowl shouldn't touch water), and beat with handheld mixer about 1 minute, or until egg mixture is hot to the touch. Remove from the heat and keep mixing another 3-5 minutes until mixture is thick and creamy, and falls in nice ribbons that take a few seconds to merge with the rest of the mixture. Beat in melted butter and set aside.

3. Sift the flour, salt, and cocoa powder in a bowl. Whisk together. Add to the egg mixture and fold together. When mostly combined, add food dye and continue to fold until evenly incorporated.

4. Spread evenly into the jellyroll pan and bake 7-8 minutes, or until springy to the touch. Turn cake out immediately onto a clean dishcloth or a new piece of parchment paper, peel off the old parchment, and roll it up. YES THAT'S RIGHT! Face your fears, and roll that sucker up. Have gumption. Set aside and let cool completely, about twenty minutes

5. In the meantime, whip up cream. Beat until air is incorporated, then add in sugar and vanilla. Keep beating until medium stiff peaks form. Set in fridge until ready.

6. When cake is cooled, unroll and peel parchment or dishcloth away. Spread cream evenly in the inside of the cake. Roll right back up and your SPIRAL CAKE OF DEATH is COMPLETE!!!!