It's 2018, the world has gone crazy, and Twitter's official account is proof of it. 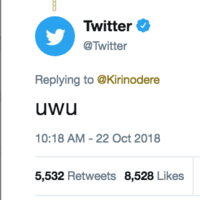 Today was quite the day on Twitter: just five hours before billionaire flamethrower salesman Elon Musk's black-hearted declaration of love for anime (and subsequent tweets which I think we can all agree would be best forgotten), the Official™ Twitter Account made the following tweet:

"What's this?" you may ask, but worry not, fearless reader - the "uwu" symbol is a Japanese Emoji, not unlike "(。･∀･)ﾉ" (hello) or "┌( ಠ‿ಠ)┘" (translation unavailable). In particular, "uwu" is a "smiley face", meant to convey a deep, meaningful joy found in something sweet that a dear friend that you kinda wish you were dating says to you at 1:00am on AIM while your parents think you're sleeping.

UwU is a popular text-based emoticon among conveying a feeling of happiness or smugness. Its appearance stems from anime and manga, where it is common for to characters close their eyes while smiling.

To be fair, their assesement of Japanese artist Twitter is accurate, so far as your trusty author can tell. The tweet pokes fun at the popularity of SSSS.Gridman's Rikka Takarada among Japanese artists and others, particularly focusing on her legs. Don't believe me? Take a look:

Thinking about starting a religion around Rikka Takarada's open thighs hit me up if you want to join pic.twitter.com/iGnVokLQLp

So why is the official Twitter account jumping into this conversation about an anime character's legs with an "uwu"? Beats me. I hope they're watching SSSS.Gridman on Crunchyroll though, we've got a new HTML5 Player and whatnot. Why the official Twitter account is tweeting about anime at all makes about as much sense as Silicon Valley CEOs engaging about their "chibi" Wolverine figures in a thread about the medium, but I guess it's 2018 and anything can happen.

As a final note, I present you with the following:

I hate this. I hate that I read this sentence, I hate that I sounded it out in my head. Someone made ad revenue off of my viewing this sentence, and I probably improved their SEO while I was at it (Source). Well, thanks for reading anyways, and please don't tweet "uwu" at the Crunchyroll Twitter account, because just like with "Crunchyroll and chill lol" I will see it more than 70,000 times in the course of a single month. At least nothing can be worse than this, uguu ~