We Point Out All the Cameos and References in JoJo's Bizarre Adventure: Golden Wind (So You Don't Have to) 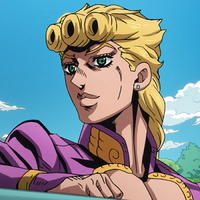 JoJo's Bizarre Adventure is an epic that spans continents, generations, and even multiple casts of characters. Despite this, it somehow manages to all come together as one cohesive narrative about one man's thirst for power and a bloodline resolved to thwart him at every turn. It's latest iteration--Golden Wind--centers around Giorno Giovanna, a descendant of the Joestar bloodline on a quest for control of the Italian mafia. While this premise might sound very self-contained, it's actually quite connected to the overall JoJo story. The first episode alone contains references to each and every JoJo arc that came before it.

Now, it's been a hot minute since Diamond is Unbreakable graced the screens of our respective devices--we can't blame anyone for being a little fuzzy on some of the previous crazy capers the various Jojos have all gotten into. To remedy that, here's a rundown of every reference and cameo so far in JoJo's Bizarre Adventure: Golden Wind! 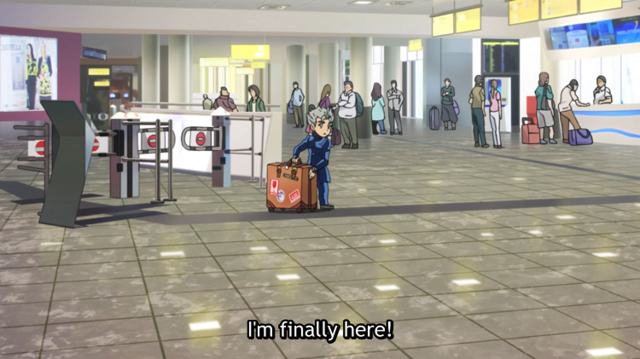 Our first cameo in Golden Wind is none other than Koichi Hirose, the lovable pint-sized sidekick from Diamond is Unbreakable. What he lacks in height, he more than makes up for in heart. After being shot by a mysterious bow and arrow, Koichi avoided death and came out the other side with mysterious Stand powers. Joining forces with Josuke and Jotaro to root out the evil within his hometown, he took down a con-man, swayed the heart of a creepy stalker, and even stood toe-to-toe with a sadistic suburban serial killer! Without the efforts of Koichi Hirose, Yoshikage Kira and his unbeatable quartet of abilities would continue to terrorize the quiet streets of Morioh. Speaking of which, Morioh’s town symbol can be spotted as a sticker on Koichi’s suitcase. 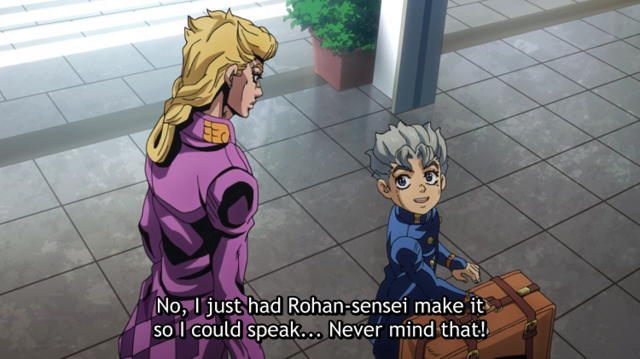 In response to a compliment on his proficiency speaking Italian, Koichi eludes to being helped by a certain man named Rohan. This is, of course, a reference to Rohan Kishibe, Morioh’s resident professional manga artist. When he’s not busy drawing his hit shonen manga Pink Dark Boy, Rohan is often found licking spiders, setting houses on fire, and using his Stand Heaven’s Door to make little Koichi Hiroses everywhere miserable. Heaven’s Door gives Rohan the ability to read people like a book... literally. He actually turns people into books and reads everything about them. He can also write things in the margins of these books that manifest into reality, such as “Koichi Hirose can speak fluent Italian.” He sounds kind of like a jerk, but don’t worry, he’s a jerk with a heart of gold (silver at the very least).

Fun fact: Rohan is a huge fan of the film Pretty Woman, and spent ¥2,500,000 on furniture identical to those used on-set in the 1990 Julia Roberts film. 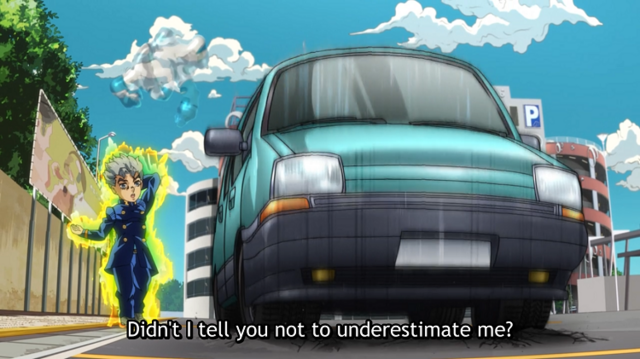 Not even five minutes after his plane lands, Koichi already finds himself in need of assistance from his Stand: Reverb Act 3. We don’t get a good look at Reverb here, but it’s an impressive display of its ability to add tremendous weight to any object within range. Koichi understandably strikes a pose to punctuate its coolness. 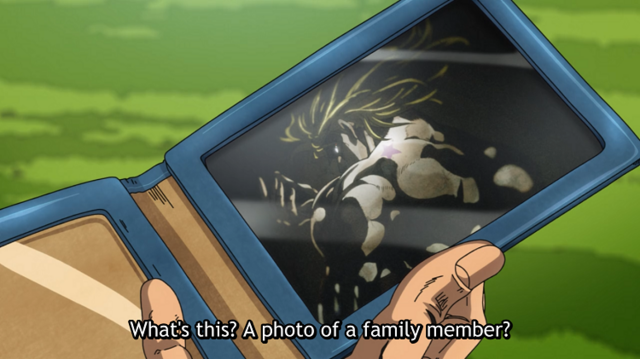 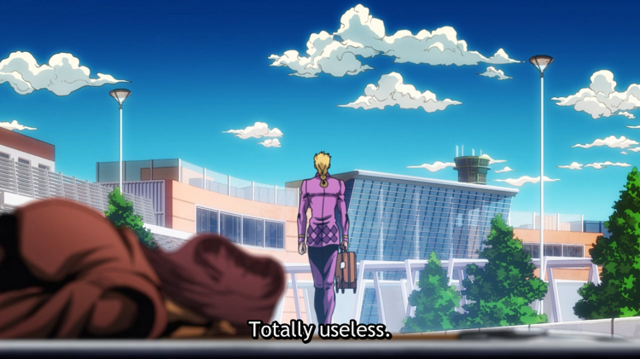 Hmmm, Giorno sure likes the word “useless,” doesn’t he? Wasn’t there some other guy in JoJo’s Bizarre Adventure who said that a lot? 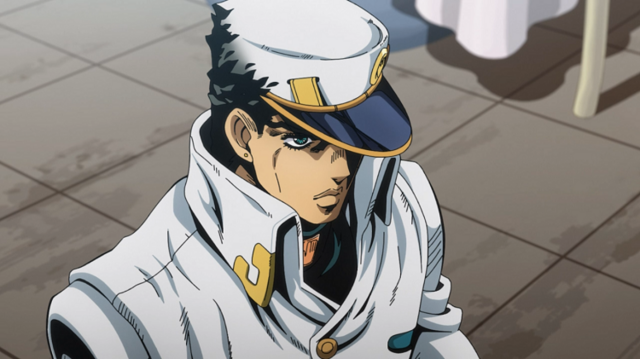 Here we get a flashback to Koichi being tasked with his mission to Italy by none other than Jotaro Kujo! Jotaro is, of course, a former vampire hunter turned marine biologist who can stop time and punch people REALLY hard. Jotaro was the hero of his own arc in Stardust Crusaders, before assuming more of a supporting role in Diamond is Unbreakable. As a student, he traveled from his native country of Japan halfway across the world to Egypt in pursuit of the aforementioned evil vampire DIO. After a long, hard journey, Jotaro punched the immortal being so hard he turned into ash and died. He later traveled to Morioh to contact his younger uncle Josuke and investigate a string of local murders. It’s there that he also met Koichi.

Jotaro happens to mention the Speedwagon Foundation in this flashback, a name with a history that extends all the way back to Phantom Blood. Robert E. O. Speedwagon was the name of a common street thug who attempted to mug Jonathan Joestar on the cold streets of London one night. However, he was won over by the gentleman Joestar’s compassion and joined him in his pursuit of the soon-to-be evil vampire Dio Brando. After the suspected death of Dio, Speedwagon left for America, where he stumbled into becoming a massive oil baron. With his fortune he set up the Speedwagon Foundation, a global organization dedicated to the pursuit of evil individuals and artifacts with paranormal abilities, such as Pillar Men and Stand users. After working with them in Stardust Crusaders, Jotaro joined the Speedwagon Foundation. 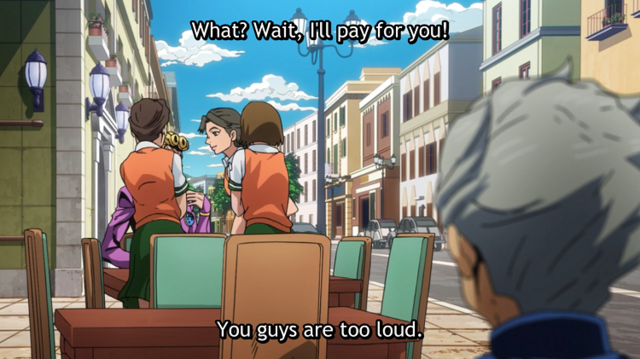 While Golden Wind has yet to fully reveal Giorno’s true ties to the Joestar bloodline, he clearly seems to possess their famous way with women. 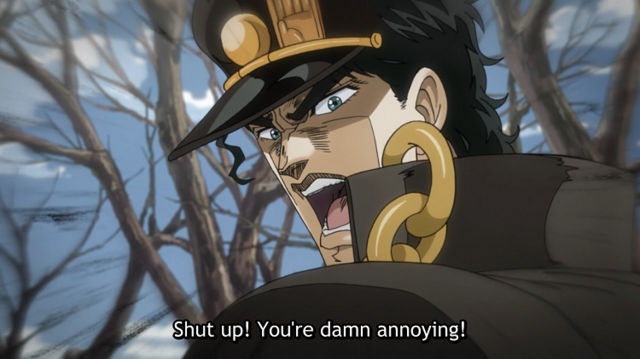 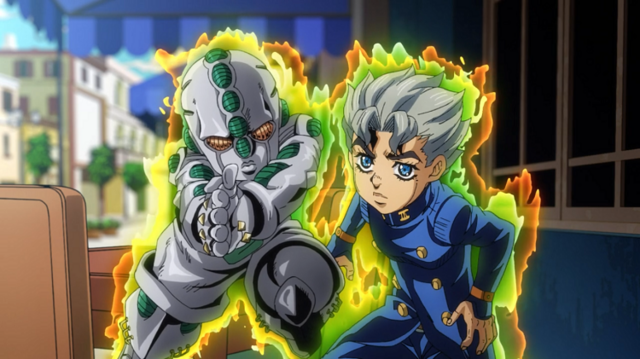 Finally we get the full reveal of Reverb Act 3 and his big shorts. 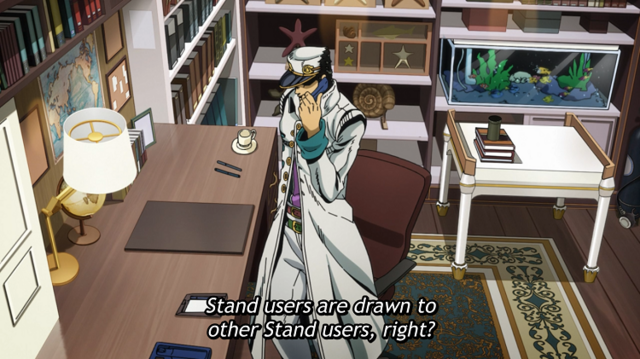 After Giorno escapes him, Koichi reports back to Jotaro and mentions that “Stand users are drawn to other Stand users,” a common refrain from Diamond is Unbreakable used to explain why so many darn Stand users all live in quiet Japanese suburbs. 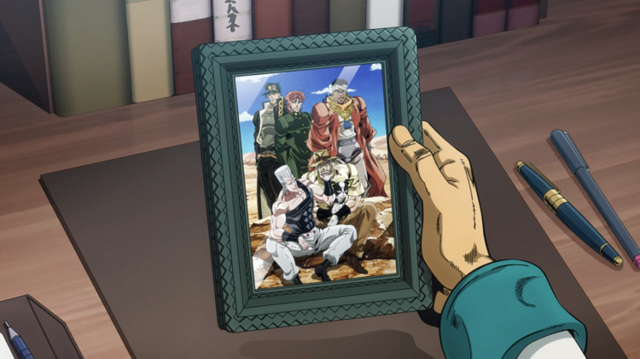 In this same conversation we get a shot of the titular Stardust Crusaders: Jotaro, Kakyoin, Avdol, Polnareff, Joseph, and Iggy the Boston terrier. This picture of Stardust Crusaders' main cast was taken during their long journey to Egypt in pursuit of the evil vampire DIO. They will all be missed.

While gazing at this picture, Jotaro reveals to Koichi that he’s the one who killed Giorno’s father. Here, most would assume he means the user of Dark Blue Moon, but he actually means DIO. It turns out that after his reappearance in Egypt, DIO took some time out from killing and eating people to father a son. If you’re wondering why this makes him a Joestar instead of just a Brando, don’t forget that the body DIO used to father Giorno belonged to none other than his adopted brother Jonathan Joestar. Jonathan had supposedly killed the vampire Dio Brando, but it turned out he only succeeded in killing Dio up to the neck. His head lived on and swore vengeance on Jonathan, going so far as to stow away on a ship and murder its passengers, including Jonathan. He attached his head to Jonathan’s body and locked himself inside a coffin that sank to the bottom of the ocean, only to be unearthed a century later. 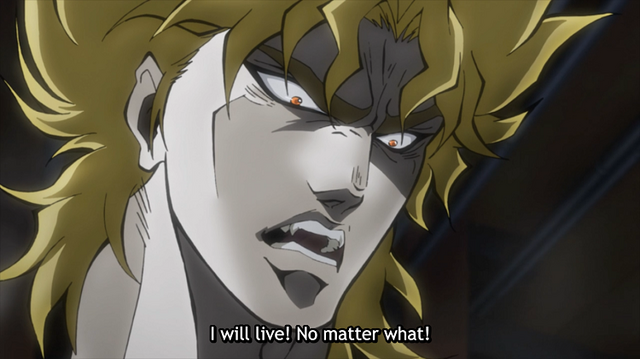 It remains unclear why Giorno keeps such a sensual photo of his father as a keepsake. 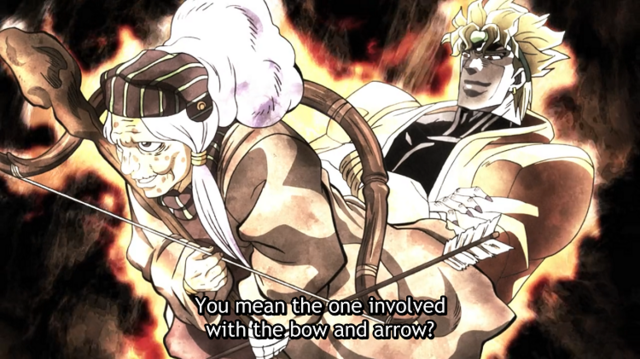 Koichi then mentions the bow and arrow, an ancient artifact that has the ability to draw Stands out of those with the ability to wield them and kill those without. DIO uses this artifact to recruit Stand users to his side in Stardust Crusaders, and it pops up again in the hands of one of DIO’s associates in Diamond is Unbreakable. Koichi owes his own Reverb ability to being stabbed with this very artifact.

Fast-forward a few episodes, and it appears that a Stand associated with the prisoner Polpo is in possession of an arrow too! What could it mean that another bow and arrow happens to pop up in the same city as the son of DIO? Can Koichi use his knowledge and experience to aid Giorno on his quest? Will any other fan-favorite characters make an appearance at some point? One thing’s for certain: one of the most wild arcs of Jojo’s Bizarre Adventure has only just begun, and I for one can’t wait to see what else it has in store for us.

Were there any references so far that we missed? Are there any characters you'd like to see come back for Golden Wind? Let us know in the comments below!

Tags
jojo's bizarre adventure, golden wind
« Previous Post
That Time I Got Reincarnated as a Slime TV Anime Expands Cast with Demons and Lizardmen
Next Post »
My Hero One's Justice Game Launches in the West with New Trailer
Other Top News
6 Comments
Sort by: