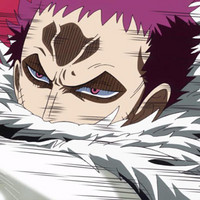 It's finally time to have "the talk," y'all. I know, I've been anxious about it, too, but everyone has to have it at some point, and many people consider it a rite of passage. Of course, I'm referring to the discussion that we need to have about Luffy vs Katakuri, the latest "big fight" in the One Piece anime. One Piece, like most stories about punches and punched faces, has a tradition of climactic fights, whether they're Luffy vs Crocodile, or Luffy vs Lucci, or Luffy vs Angry Nationalist Fish Bro. And so Luffy vs Katakuri is simply the latest in a series that, if One Piece creator Eiichiro Oda's current pacing continues, will last until the sun swallows the earth.

That said, Luffy vs Katakuri feels a bit... off. Not because it isn't extremely rad. It is. Due to a string of especially engaging episodes, solid battle animation, and little moments like Katakuri's "You think I'm just gonna wait around and let you transform?" line that nearly made me spill my coffee due to how much I fist pumped over it, Luffy vs Katakuri has become one of the most exciting threads in the anime in a while. However, something feels different about it, and that feeling has to do with how it compares to the set-up of other big fights. 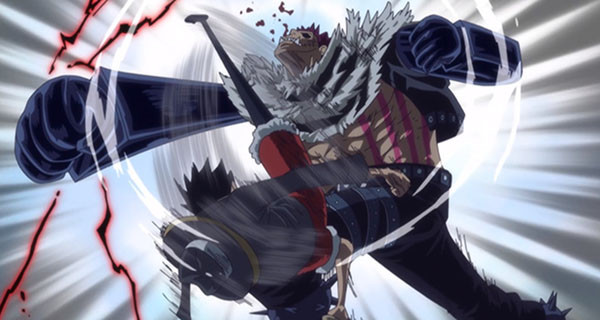 See, what often makes Luffy's fights so satisfying is that the knockout punches usually coincide with liberation. Luffy cracking Arlong's spine through every floor of a tower meant that Nami, and the village that she was raised in, finally wouldn't have to put up with the dude anymore. Luffy punching Crocodile through the street (and effectively ruining the schedule of the Alubarna Public Works Department) meant that the people of Alabasta would be free from his rule. When Luffy punched Doflamingo down into the ground (people on the Grand Line should really get Straw Hat insurance), it meant that Dressrosa would no longer have to fear their evil false king.

In short, most of Luffy's big throwdowns are Fistfight Declarations of Independence... and Luffy's brawl with Katakuri, well... isn't. Beating Katakuri won't save Whole Cake Island from the rule of Big Mom. A while ago, I wrote about why the Whole Cake Island arc was so interesting to me, and that was partly due to the fact that it 1) it makes you think about what you can consider to be a "victory," and 2) how victory for the Straw Hats simply means retrieving Sanji and then surviving the rest. From there, the fight between Luffy and Katakuri has morphed into something way more personal. 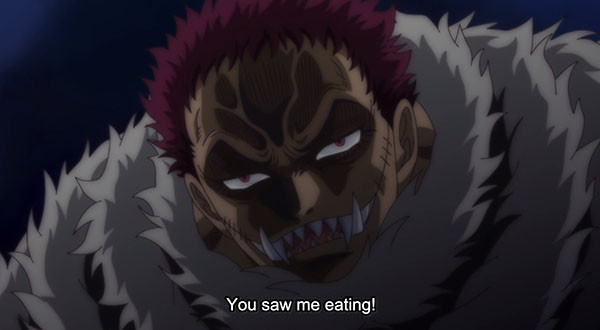 Luffy and Katakuri will probably never have an outright "we're not so different, YOU AND I" scene. Personality-wise, they're not really similar. Luffy is excitable, adventurous, and loves meat. Katakuri is staunch, tense, says "Mama" with all the frequency of a Migos song, and enjoys copious donuts. Yet, they both live with the weight of their entire families on their backs. Luffy's family is, of course, his crew, and as we've seen, he'll go to any lengths to protect them. He loves his crew, and they love him, and with his goal being to achieve the status of Pirate King and live freely, it makes for a pretty open lifestyle. 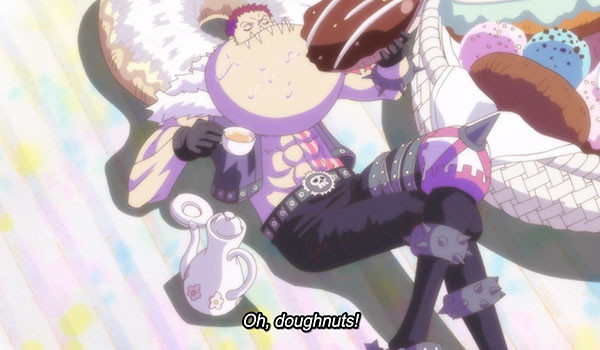 To say that One Piece is directly commenting on how traditional masculine roles can lead to repression and anger (when Luffy sees Katakuri having a moment of relaxation, Katakuri is pissssssed) might be going a bit far. But the idea is out there, and I think that's a pretty cool topic for a shonen story to tackle. Also, being a villain usually seems way more fun than being a hero, as the villain is free to run rampant, while the hero is stuck being devoted to whatever code they promised to keep when their parents/home planet were annihilated--but here, it's reversed.

When the day (and fight) are over, Luffy can go back to pirating on a whim. Katakuri, meanwhile, is just a magical footstool for the Big Mom family, no matter how much some of them love him. And while I won't spoil anything for those that only watch the anime, this battle basically comes down, not to the liberation of Whole Cake Island, but the emotional liberation of Katakuri. Katakuri's whole life has been devoted to the fact that, no matter what, he can't lose. So maybe losing (and thus becoming okay with his own personal "weaknesses") will be some Chicken Soup for Katakuri's soul. Boom. Enjoy that reference, people that went to middle school in the early 2000s. 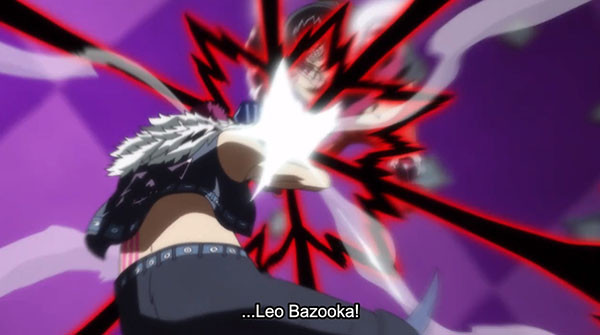 Overall, the Luffy vs Katakuri fight is very much an awesome montage of dudes getting knocked into (and through) various walls that's in the same vein as many other One Piece fights. However, it's also another examination of the "Well, what are you fighting for? And what do you really get if you win?" theme that runs so richly in One Piece. It's stuff like this that, over twenty years in, still makes One Piece worth talking about.

Daniel Dockery has a Twitter that you could probably tolerate.