Relive Some of Our Favorite Gross Moments in JoJo's Bizarre Adventure

From Alien Barf to Taste-Testing Spiders, JoJo's Got You Covered! 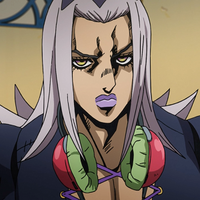 JoJo’s Bizarre Adventure is many things. One of the most unique properties in the entire world of anime, it is constantly oscillating between hot-blooded action, clever strategic planning, over-the-top theatrics, and even slapstick comedy. JoJo’s Bizarre Adventure is confident in many things, one of which is its own ability to completely gross out its viewers. If you’re keeping up with the latest season, Golden Wind, you’ve already seen a truly bizarre prank played on Giorno courtesy of Abbacchio. Giorno handled it like a star, but it got me thinking: could this be the grossest moment in all of JoJo’s? Looking back five seasons in, it's had a lot of gross moments. Over the many decades he's worked on it, creator Hirohiko Araki's brilliant creative mind has produced a never-ending stream of diabolically golden situations, and David Production's adaptation has perfectly illustrated them at every turn. So, I decided to go back and try and find as many moments from the series that were just as gross, if not grosser.

A Head of the Curve 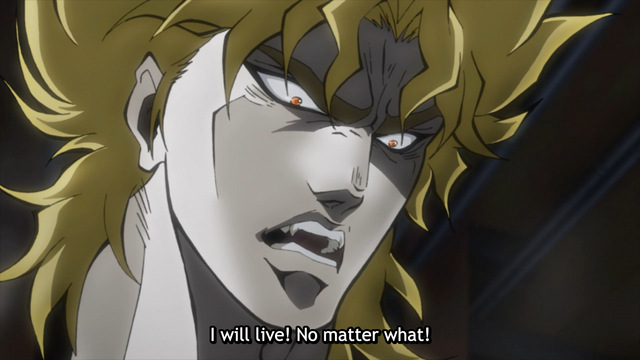 At this point in JoJo’s Bizarre Adventure, fans had already seen some pretty wild stuff. Cats ate puppies, mustachioed men punched frogs, and a severed head spit roses at immortal vampires. Despite this, I don’t think anyone was quite prepared to watch a severed head use its own blood vessels as lassos for some good ol’ fashioned body snatchin’. Just a talking head by itself? Sure, that’s fine. I’ve seen plenty of those over the years. Some blood coming out of it? No problemo. Arteries, though? Just thinking about it sends shivers down my spine. Some parts of the body were simply never meant to be autonomously wielded. Being immortal sounds cool, but if that’s what it gets me, I think I’m good for now.

Something of a Similar Vein 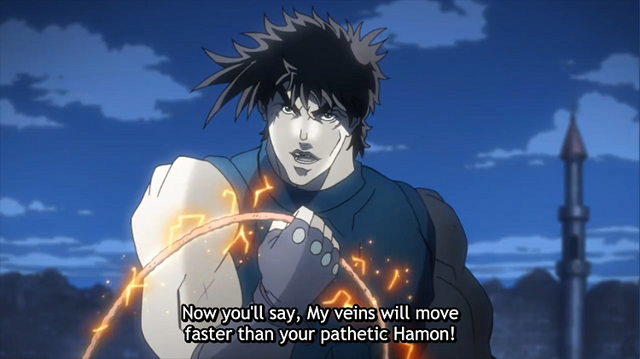 Oh, now this one is perfect. See, not only do we get everything gross with the vein stuff from before, but not we ALSO get gross nail stuff thrown in as an added bonus. Esidisi of the villainous Pillar Men fancies himself a master of boiling blood, which is exactly what t sounds like. He ejects his own arteries from beneath his skin and pours his own raging hot blood onto his enemies to defeat them. To top it all off, he just has to go and lift up his fingernails like tiny keratin cellar doors so that the boiling hot blood vessels can get out. It’s a good thing I’m not a Joestar, because I would just lay down and start crying right there. 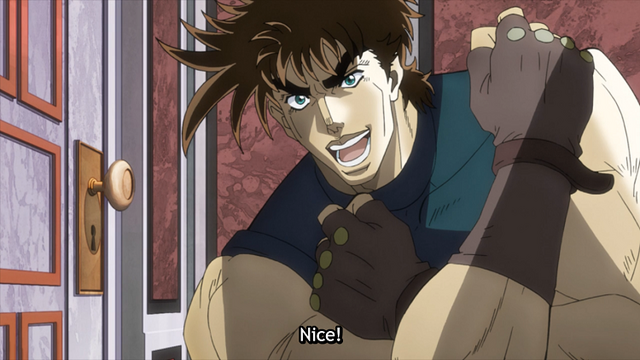 What, did you think Esidisi was done being just the grossest imaginable thing alive? You’re dead wrong, buster. This ungodly monstrosity survives death as nothing more than a brain and—you guessed it—mass of blood vessels. He hitches a ride on Joseph’s back and possesses the body of Suzi Q. before finally being defeated by Joseph and Caesar. This might very well be the grossest fight in all of JoJo’s Bizarre Adventure. If nothing else, it sure is a sight to behold.

Also, Joseph peeps on his mom in this episode. To be fair, he doesn’t know she’s his mom yet, but that’s still pretty gross, dude. 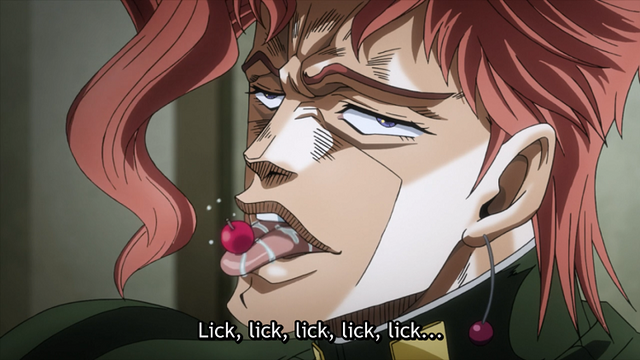 A Lesson in Infrastructure 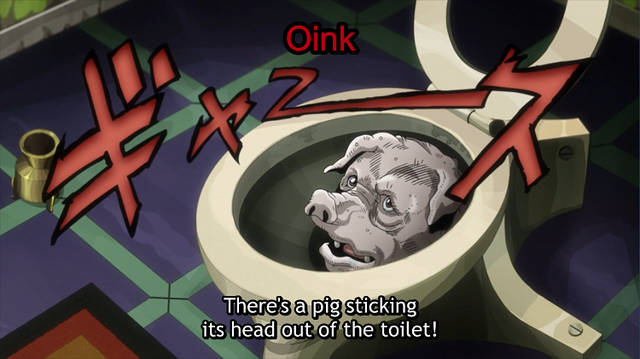 Question: what do you do when you accidentally build a pig pen too high below your restaurant right below the restrooms? Apparently, what you do is give your customers a stick and tell them to go to town on it. Another thing you could apparently do is just forego paper and let it lick your butt instead. I’d also like to point out that in this same very scene, Polnareff finds the man who murdered his sister. JoJo’s Bizarre Adventure is a great show. 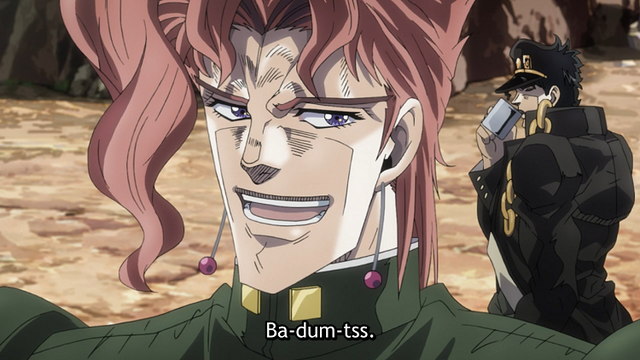 JoJo’s Bizarre Adventure can be a pretty brutal show. All of its villains are built up to be some of the worst people imaginable so that their eventual deaths at the hands of our heroes become all the more satisfying. Death 13 eats it harder than anyone else in the entire series. Like, literally. Kakyoin literally forces an evil baby to eat his own poop. At one point in Diamond is Unbreakable Josuke turns a guy into a rock and he still got it better than Death 13. Never under any circumstances mess with Kakyoin and his naps.

A Man of Culture 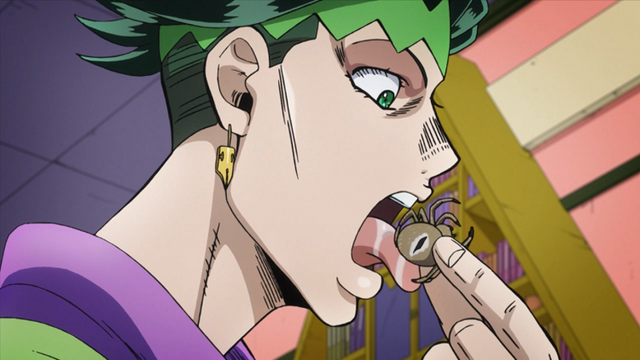 I don’t know about you, but if I found out that my favorite manga artist lived down the road, went to go get his autograph, and subsequently found out that he liked to lick spiders, I would respectfully excuse myself and move the next day. Listen, I don’t think René Magritte needed to sit around all day eating pictures of pipes to paint some art. In fact, I have a sneaking suspicion his art was better BECAUSE he didn’t do that, but hey, what do I know? 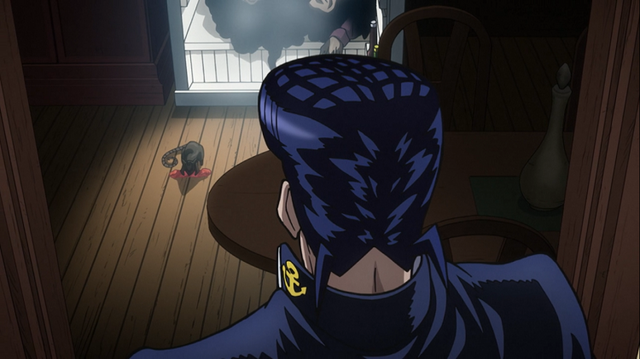 This one’s another prime contender for grossest moment in all of JoJo’s. After tracking down a rat that became a Stand user, Josuke finds it in an abandoned farmhouse taking food from a fridge. Only, it’s not actually abandoned. Its owners are just a writhing mass of melted flesh the rat put into the fridge as a living food source. This nightmarish power is somehow used to comedic effect when Jotaro acts completely nonchalant over his own arm melting off. 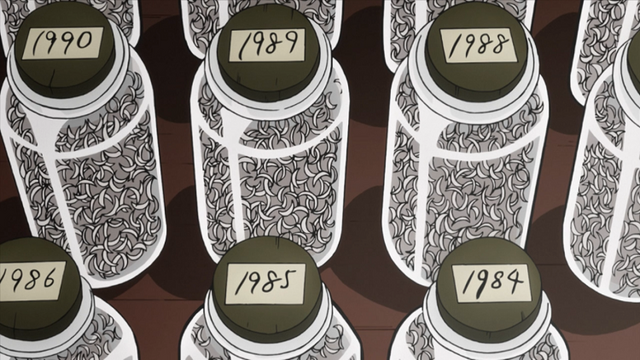 I know that he murdered, like, a lot of people and all, but this is probably the worst thing Yoshikage Kira ever did. Just use a trash can, dude.

I Think That's His Tell 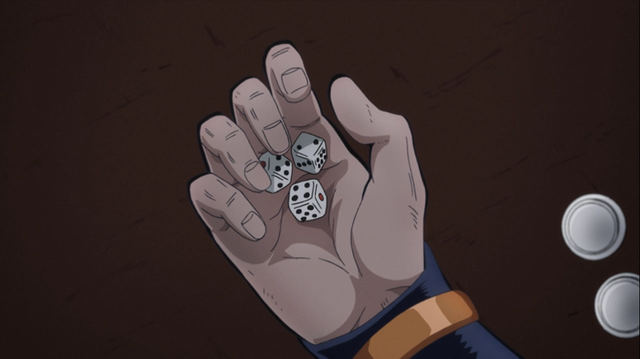 Last, but certainly not least, we have the canonical proof that aliens have extremely weak stomachs. Protip: next time you decide to cheat at a game of cee-lo by having your friend turn into dice and rig the game in your favor, make sure he has a tiny little bucket at the ready.

While all of these moments do gross me out, I can’t even begin to imagine a JoJo’s Bizarre Adventure without them. Each and every one of them was used to either uncomfortably terrifying or completely hilarious effect. Part of what makes JoJo’s Bizarre Adventure so special to me is its unparalleled ability to juggle so many different tones at once and still nail every beat perfectly.

Which of these moments is your favorite? Are there any others you think belong on this list? Let us know in the comments below! Now if you’ll excuse me, I think my tea is ready.