The food in Golden Kamuy isn't just delicious, but engaging as well. 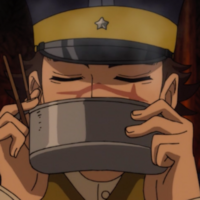 Whether you eat a lot or you stick to your daily meals because school and work takes a lot out of you, there's no denying that food's pretty important. You grew up with your family's home meals, and there's always that one dish that you can't get enough of. But as you grow older and expand your social circle, you begin to see that there's more out there than the foods you're familiar with. As you make friends and aquaintences from different backgrounds, you come to realize that their cultural staples don't necessarily line up with yours. Sometimes, that's a weird feeling, when a friend you like is serving you something that you intrinsically think is strange or weird. Still, it's your friend, so you try it anyway. Your friend is really happy that you gave it a chance, and it doesn't matter whether you liked it or not, because you feel good about that. After all, your friend's food is part of their background, and in sharing their food with you, they're sharing a part of their culture as well. It's a small action overall, but there's no denying the significance of it. Nothing shows this exchange more than Golden Kamuy. 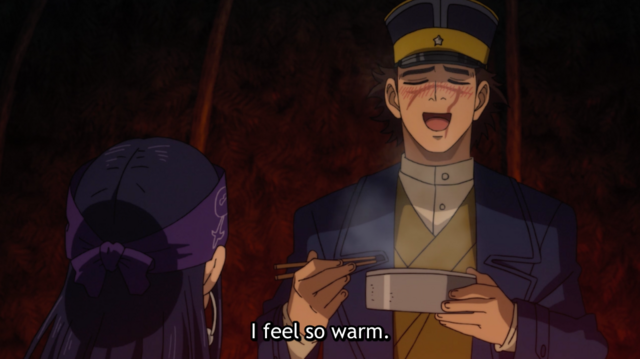 Golden Kamuy spins a tale following the chaos of the Russo-Japanese War and how the landscape of Japan rapidly changed in the following years. It encompasses a mix of cultures during the time, from the Ainu trying to preserve their land, the struggles of the veterans returning from the war, and the revolution stirring above Japan in Russia. Sugimoto and Asirpa team up and traverse the forests of Hokkaido in search of the tattooed prisoners and the pile of Ainu gold that lays at the end of the journey. However, Hokkaido during this time period was inhabited but not extremely industrialized, and much of their journey is through the wild. Naturally, they’d have to eat, so their only option is to hunt.

They are out in the wild forest before a time where rapid development swept across the land, so stopping at inns for food every day isn’t really an option. The food they eat is practical, but practical doesn’t mean not tasty. They hunt and kill when they need to eat, and they aren’t wasteful with any of the parts. Asirpa makes sure to harvest edible plants to add to the meal so it isn’t just roasted meat, but something with flavor as well. They aren’t just hunting, they’re cooking. A lot of the fandom jokes that this series is a cooking anime, but there’s no question that the food is always made to be extremely delicious. Didn’t that recipe that I mentioned sound appetizing? Skull-Face Bookseller Honda-san parodies this well, saying that the animals look so delicious that people might be tempted to go hunting for their own. 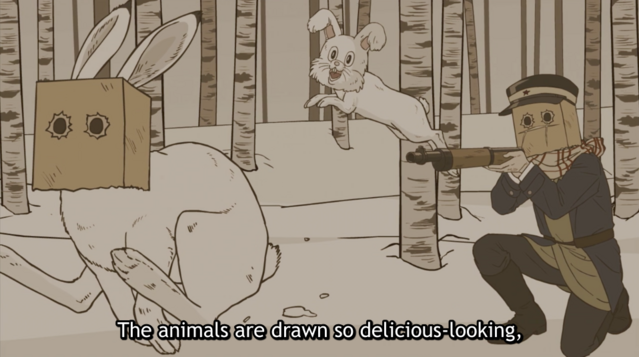 Since they have to catch food, and Sugimoto’s rifle would obliterate a squirrel, Asirpa sets traps for the animals, often made out of wood and twine. They’re simple, but they work. Asirpa and Sugimoto don’t go starving. I’ve lived in a city my entire life, so I’m not terribly familiar with hunting. All the information presented in the show was fascinating and most importantly, they made sense. The show also makes it clear that there isn’t a one-fits-all trap for catching animals, especially for those of different sizes and behaviors. Sugimoto isn't Ainu, and even though he's well-versed in combat, he isn't that familiar with hunting animals down. Asirpa is absolutely necessary for Sugimoto to be able to last this long purely in the wild, because she is familiar with the forests in a way that Sugimoto isn't. Sugimoto is learning, and we are sharing the journey along with him.

Food culture is universal, but the type of food definitely isn’t. If someone wants to make fun of a culture for being strange or foreign to them, food is an easy target. After all, it’s very simple to pick on a person for eating something that you personally can’t conceive as edible. To be fair, the cultural differences are still present, as Sugimoto hesitates to eat some of the more questionable parts of their food, and Asirpa thinks for the longest time that the miso Sugimoto adds to his broth is actually feces. Sugimoto isn’t exactly eager about the fact that Asirpa eggs him on to eat squirrel brain raw. 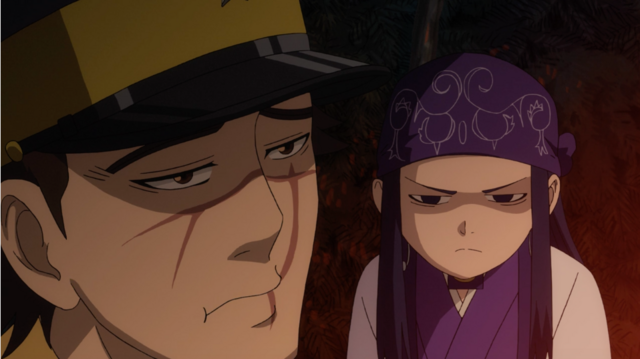 It's no secret that the non-Ainu characters Asirpa feeds are a litle put off by the food. Sugimoto rolls with it, but does it in a way that it feels like he's not thinking about it or is too enthusiastic. Shiraishi blanks out when Asirpa suggests that he eats a deer lung raw. Ushiyama seems very put off with the idea of eating a woodcock bird's brain, and even asks if it's actually edible. In these cases, Sugimoto is a good basis of comparison. Once they see that Sugimoto is willing to try food that they find questionable, it eases their worries and makes them more willing to give it a try. Asirpa herself is pretty convincing too. But it's not just Ainu culture that's strange to non-Ainu, but Asirpa feels the same way. She thinks that miso is feces, and is thus extremely reluctant to try it. She comments several times that she finds it incredible that Sugimoto is happily eating fecal matter. Of course, this isn't true, as miso is just fermented soybeans, but Asirpa doesn't know that. Upon seeing Sugimoto and Shiraishi happily eating miso, she gives it a try. It's a long try that pulls out a lot of effort on her part, but lo and behold--she likes it!

The characters don’t pretend that attempting to try food from a completely foreign culture isn’t strange, but they also don’t reject it outright. There’s an effort to at least sample the food, and usually, both end up being surprised at how it tastes. It may seem strange, but that doesn’t necessarily means it tastes bad. This touches on a genuine feeling about trying new food; sometimes you need some courage, but denying it outright would turn away a potentially pleasant experience. 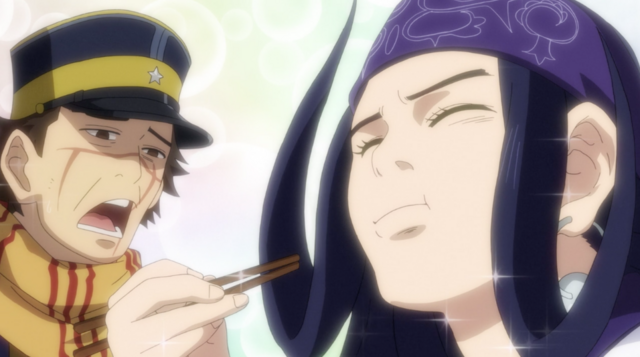 Of course, living in the city, it’s pretty unlikely that I’ll go out to catch and kill a squirrel. Reindeer aren't native to where I live, and even if they were, I don't have the hunting experience necessary to be confident in my success. However, I am slightly better equipped, because knowing something is far better than knowing absolutely nothing.

Anime isn’t merely pure entertainment, it can also teach you things. I’ve certainly learned of the rules of competitive sports while watching some sports anime, and started on the path to understanding the manga industry through SHIROBAKO. While the accuracy of this information can vary, or is most likely diluted to be understood by the general watcher, anime has the potential to be quite educational. However, Golden Kamuy stands out as particularly special to me because of just how much information was conveyed to me and most importantly, how it exposed me to topics that I didn't know offhand. Squirrel brain sounds a little odd, sure, but why not give it a shot? The show definitely makes me at least curious, and that's a measure of success all on its own.

What's your favorite food or recipe from the show? Let us know in the comments!