A Kaleidoscope of Feeling: Light and Color in Tsurune

Today let's explore how the beautiful Tsurune conveys its moods through its astonishing visual design! 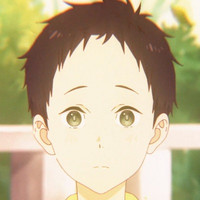 Tsurune isn’t a show that conveys the bulk of its emotional intent through its overt dialogue. Its characters talk frequently and certainly express their feelings, but there is much left unsaid; like in real life, it’s only the characters who are naturally inclined to speak all their feelings who actually articulate those thoughts. The show also doesn’t offer much internal monologue; its supossed protagonist Minato rarely dwells over his own feelings, and the thoughts of key characters like his mentor Masaki are left as a mystery for both him and the audience. This is not to say Tsurune is a cold or emotionally distant show, instead, like many Kyoto Animation productions, it expresses the feelings of its characters through the worlds they inhabit, and the colors that surround them. Our emotions are not neatly partitioned inclinations that exist apart from our lived existence; our feelings color the very world around us, reflecting how all our personal realities are a distinct expression of our emotional lives. Tsurune’s world reflects the emotional palettes of its stars, and through doing so presents the world not just as it is, but as it is personally experienced. 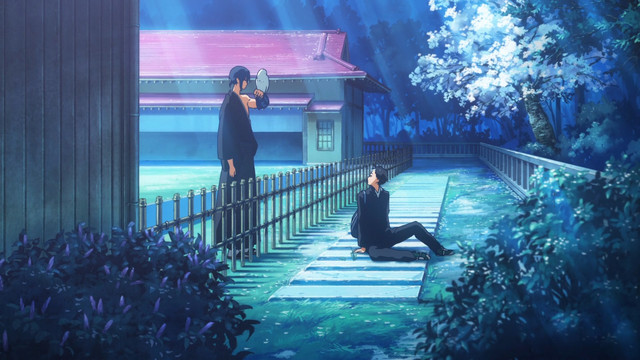 There are places in Tsurune so infused with emotion that they seem to exist only as a dream. At the end of the show’s first episode, Minato visits just such a place, when he first encounters Masaki on a lonely hilltop. There, he finds a shrine that doubles as an archery range, emphasizing how archery is an activity of genuinely mystic consequence in this world. But we don’t have to understand archery’s thematic resonance to know this is a strange and otherworldly place; the color palette itself does that, conveying Masaki’s sanctuary through rich blues, greens, and violets that make it seem as if he’s stepped into a fairy tale. Through color work alone, it is instantly clear how much this place and this moment have impacted Minato’s soul.

Other, more mundane locations are simply bright with promise, and livened through their hopeful occupants. The archery range at Minato and his friends’ school never really possesses a mystic aura, but the team’s fond feelings towards archery feel reflected in the almost dazzling green of the range, and the reflective golden sheen of their hardwood floors. Wide shots convey the open, welcoming nature of this place, the familiar comfort of the building itself, the rich promise of the range itself. When Tsurune’s stars fire forward from this point, it feels as if they are firing into the future itself, their personal ambitions reflected in the arc of their bows. And when they look back to their fondest memories, their reflections are couched in grainy filters or overwhelming saturation, reflections of how the mind distorts and elevates lived experience into myth. 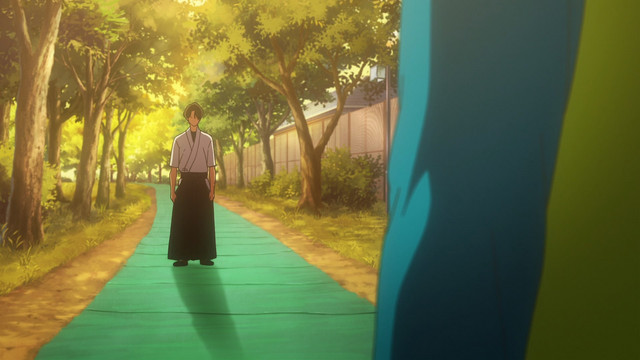 Tsurune’s worlds aren’t all happy ones, though. When its characters’ feelings sink, so does the color of the world around them, the sunlight and even weather reflecting their various moods. Early on in the first episode, Minato’s long-faded hopes are reflected in the austere blues of the early morning, as he clings to routine in the absence of a true goal. From then on, clouded skies always accompany troubled thoughts. When the team falters at their first tournament, their failures strike home in a grey and lonely place, a palette that asks us to shelter from the natural world. And when Minato’s friend Seiya reconsiders his own commitment to archery, Tsurune places him in stark and lonely compositions against a backdrop of torrential rain.

Seiya’s recent anxieties offer a perfect blueprint of how Tsurune conveys its drama through color and light. Having spent the whole season attempting to rekindle Minato’s passion for archery, Seiya believes he has succeeded, only to be told by their mutual friend Shu that he himself is a burden to Minato, and that his own lack of passion for archery will ultimately hold both of them down. With that threat on his mind, Seiya’s experience of Minato’s new joy is so intensely bright that it’s almost uncomfortable. He sees his friends in an idyllic haze he feels he cannot approach; and then, when he is finally left alone with his feelings, the clouds part into an unhappy downpour. 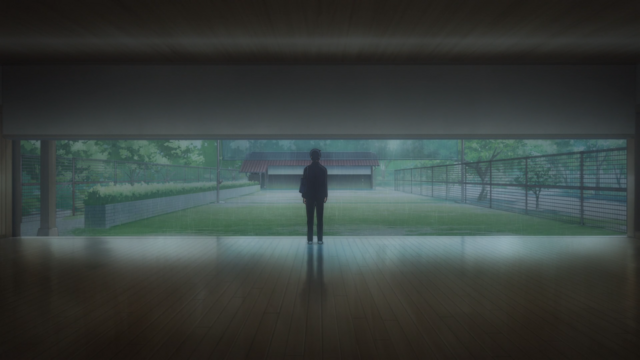 Beyond reflecting the emotional turns of its various stars, Tsurune’s visual design also embodies its perspective on archery itself. Defined by straight lines, neat geometric patterns, and vast open spaces, Tsurune’s world is a place of clarity and cleanliness, like a breath of fresh air on a cold, still morning. Though its heroes struggle with anxieties and often doubt their own progress, the beauty of archery itself is never in question; through its strong, consistent compositions, the solemnity and bracing freedom of this sport is forever clear. Beauty for its own sake is a fine thing, but Tsurune is more generous than that: through its vivid colors and striking design, Tsurune demonstrates the richness of its characters’ feelings, and the magic of the passion they share.

Tags
why it works, tsurune
« Previous Post
Love is Poetry in Motion in Senryu Girl TV Anime Trailer
Next Post »
The Many Faces of the Golden Kamuy Anime’s True Heart: Shiraishi!
Other Top News
2 Comments
Sort by: