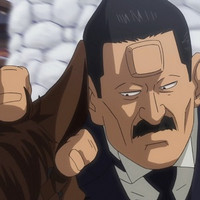 Golden Kamuy digs deep into the history and culture of 1900s Japan, showing us life in snowy Hokkaido both in its growing cities and the Ainu's wilderness homes. We've learned all about Ainu food, survival techniques, and even the series' tense political climate--and while we're all wrapped up in the conspiracies and jagged alliances, it's easy to forget that Golden Kamuy is also a violent, rough-and-tumble action-adventure.

In fact, one thing that's surprised me from the get-go (but shouldn't have, really) is how much detail and thought is put into Golden Kamuy's martial arts, and how they and the series' action are informed by the state of martial arts in 1900s Japan. This is covered on multiple fronts with a variety of characters, but let's start with one of the best--Ushiyama the Undefeated and his judo! 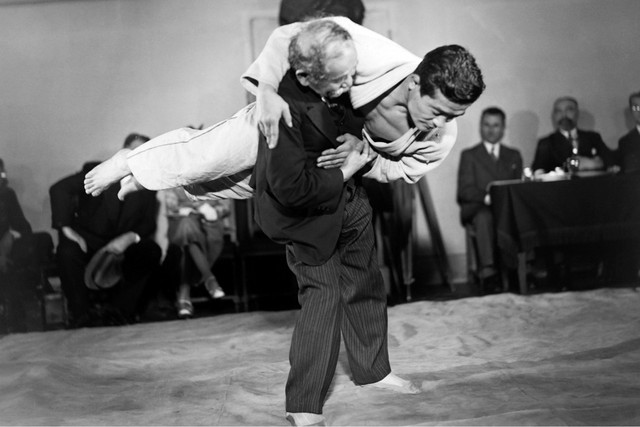 Judo, meaning "the Gentle Way," was invented in 1882 by Jigoro Kano, a Tenjin Shin'yo-ryu jujutsu practitioner who was blessed with a great mind and technique but cursed with a small body. Seeking a way to defeat larger, stronger opponents, he collected throwing and submission techniques from multiple jujutsu schools that he later codified into the Go Kyo no Waza, or Five Sets of Techniques. These throws, chokes, armbars, and leg locks became the curriculum of a new fighting system--instead of being a list of physical techniques (jutsu), judo was intended to be an all-encompassing philosophy or way (do), separating it from its origins in jujutsu.

Judo places a heavy emphasis on randori, free practice that focuses on practical application of techniques. It's one thing to practice forms and imagine throwing a human body, and it's another to internalize judo's philosophy of "maximum efficiency, minimum effort." The idea of leverage and technique over strength meant that a judo practitioner would conserve energy and use the smartest possible technique at the right time, instead of muscling through techniques to force a submission or throw. This also means that like in jujutsu (and later aikido), a judo practitioner has to know how to fall, and how to safely receive techniques so their partner can practice with them.

In the time Golden Kamuy takes place, judo is a refreshing new style, almost a fad, that combines the tradition and discipline of martial arts with the excitement and camaraderie of sports. With the Meiji Era's sword ban leading to the development of kendo, it was jujutsu's turn to evolve into a modern style, and competitive judo spread throughout Japan and further, with Kano visiting the United States and Europe. By 1900, changes were made to the competitive judo ruleset prohibiting certain joint locks to create a safer sport, and in 1911 it was inducted into Japan's educational system.

Today, judo is one of the world's most notable, popular martial sports, with schools across the globe. Judo has been an Olympic event since 1964, where it saw a resurgence in worldwide popularity--there was an even an episode of Happy Days where Arnold, played by Pat Morita, taught the kids judo. Martial arts themselves have come full-circle, with jujutsu going through yet another evolution to become Brazilian jiu-jitsu, leading to the modern definition of mixed martial arts. (For real, when you're done reading this go watch Fighting in the Age of Loneliness.) 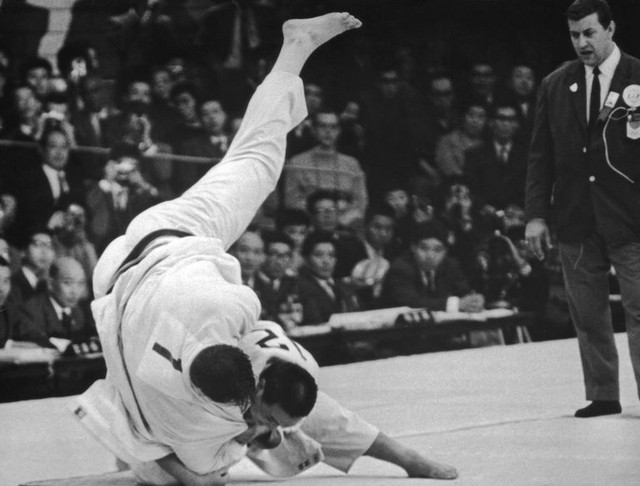 In the 1964 Tokyo Olympics, Japan took Gold in the Light, Middle, and Heavyweight divisions, but the Netherlands' Anton Geesink took the Open Division Gold

Golden Kamuy mainly uses judo through Ushiyama the Undefeated, an escaped Abashiri convict who's been training for ten years without a single loss. The man already sounds like a monster on that alone, but then you can add the whole seducing-his-master's-wife-and-killing-his-master thing for flavor. Hell, when Shiraishi accidentally runs into him in episode 7, Ushiyama does (kind of an) okuri-ashi-harai on a horse: 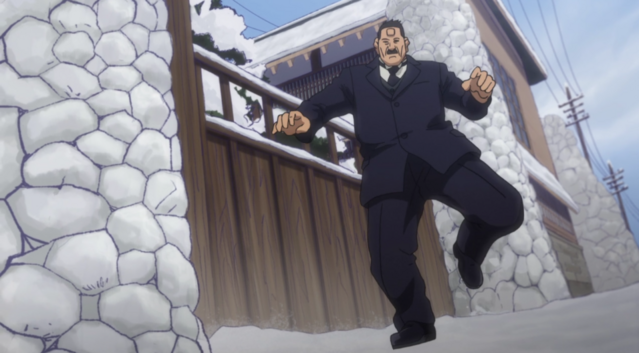 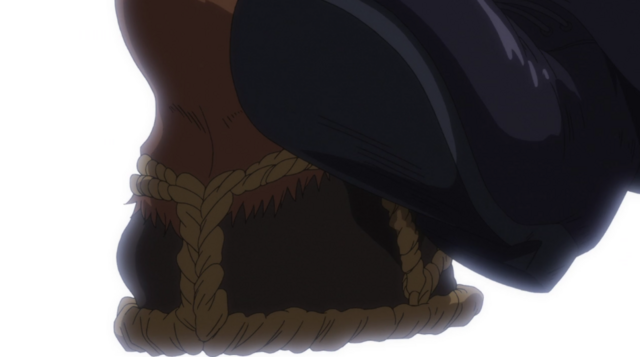 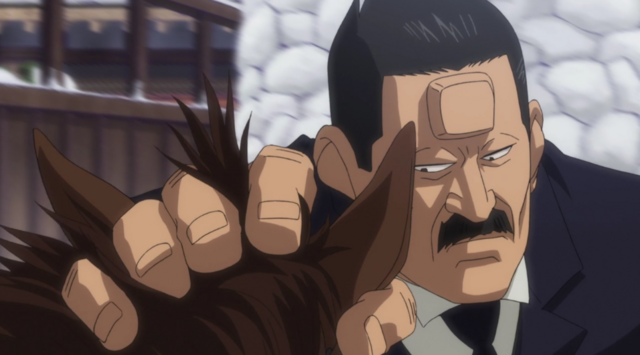 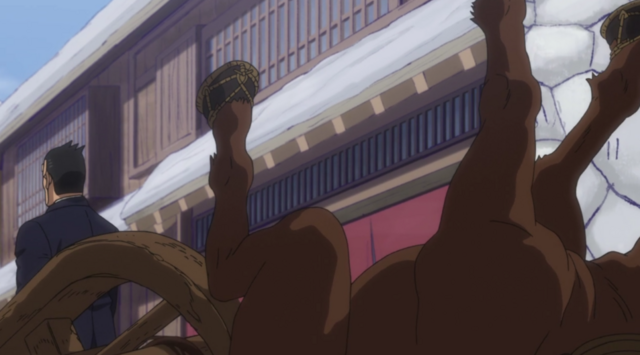 And a real one for comparison--watch Hedvig Karakas in blue:

Episode 11 features Sugimoto's group running into Ushiyama again, and Sugimoto takes note of Ushiyama's ears--these are called cauliflower ears, and are a condition caused by blood clots (or other fluid) collecting in the ears' cartilage from blunt trauma. This is most common in combat sports (like judo!) or in contact sports where the ears are unprotected, like rugby. 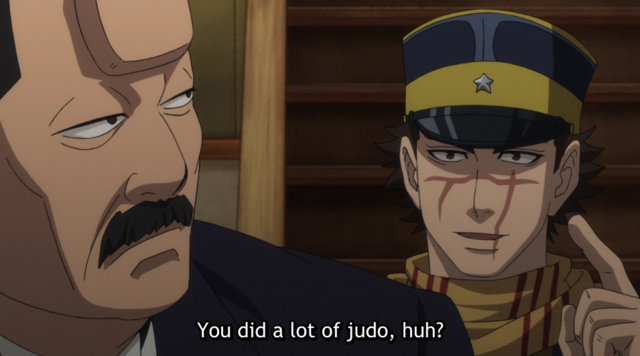 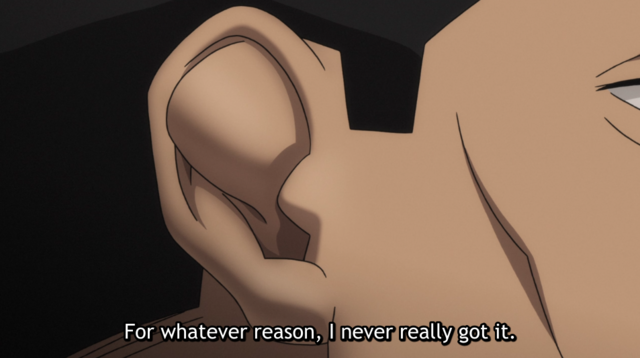 Here's UFC legend Randy Couture's cauliflower ear, which got made fun of in The Expendables: 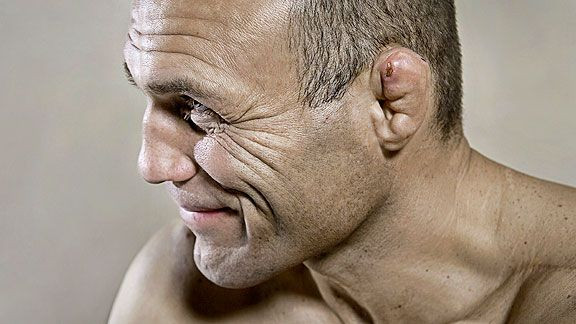 Moments after this, Ushiyama shakes Sugimoto's hand, and the two of them immediately get into a standing grapple, or kumi kate. Ideally, you're holding your opponent's sleeve with one hand and their lapel with the other. From here, you start trying to apply kuzushi, or unbalancing techniques, to get into a favorable position to perform a throw. Sugimoto notices that Ushiyama's center of gravity is incredibly low (he feels like it's "below the ground"), so trying to use a throw on Ushiyama would be super difficult and dangerous. 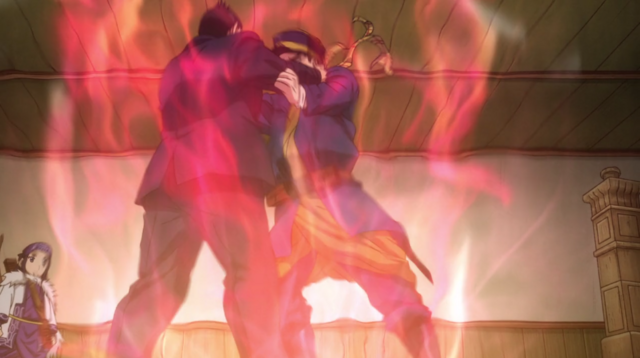 After a filling dinner and a lot of Sapporo beer, everything goes insane and Sugimoto actually has to fight Ushiyama the Undefeated back at the hotel. It's just as ludicrous and insurmountable a task as it sounds, but let's go through it technique-by-technique and watch Sugimoto totally almost die. 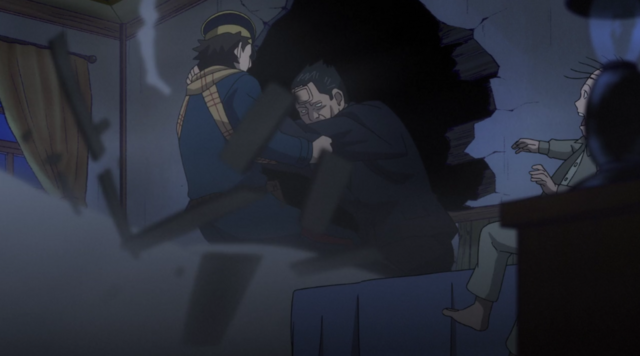 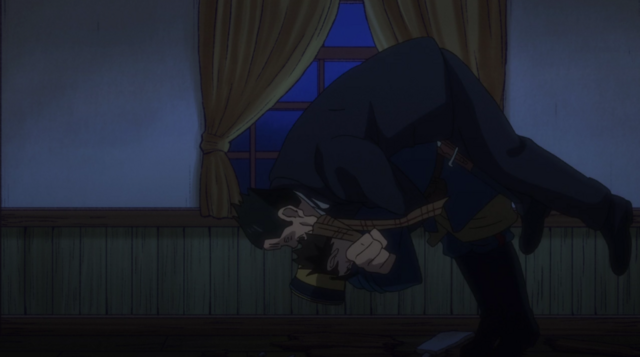 And a real seoi nage for comparison:

But Ushiyama, being the UNDEFEATED FREAK THAT HE IS, sticks his hand out in the middle of the throw to readjust his balance, and puts his feet up against (and through) the wall to prevent the throw. 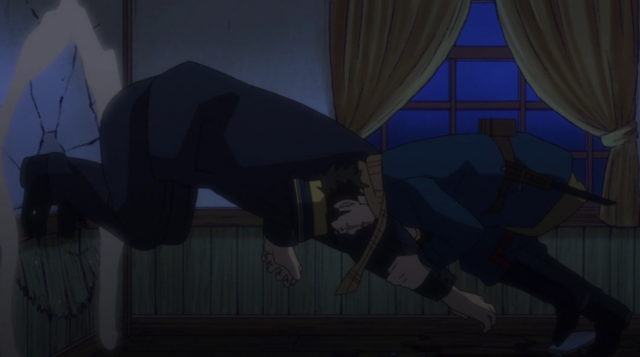 And then... yeah, I can't really call this a judo technique as much as it's just the first half of a straight-up Power Bomb (but for the sake of this article, we'll say Ushiyama's doing a modified ushiro goshi, or back drop). Bye, Sugimoto. 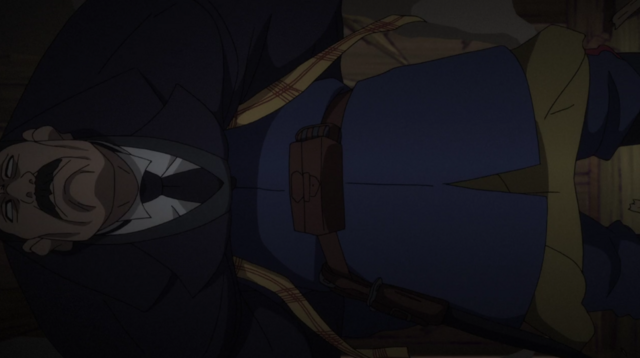 Sugimoto bravely tries to apply a juji gatame armbar on the still-not-fallen Ushiyama, but gets wrenched off the ground and slammed into the ceiling like he weighs nothing. Sugimoto then falls through a trapdoor and that brings this awesome fight to an end. 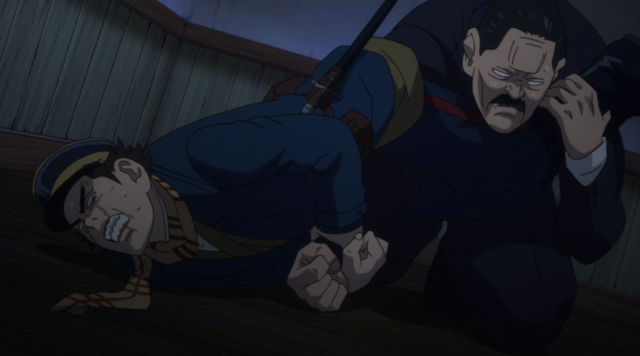 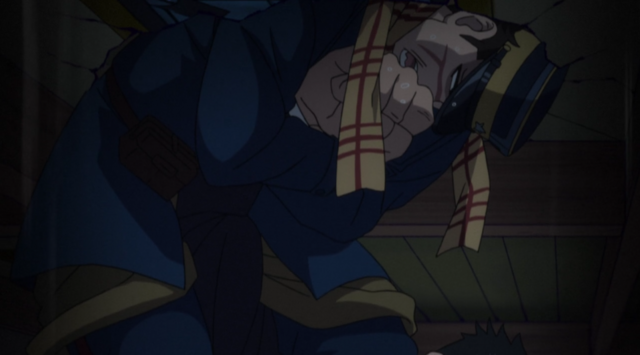 We don't see much of Ushiyama's judo until the second-season OP, where he does what looks like an uchimata (or a harai goshi?) on a freaking bear:

And then a real uchimata now:

And while Ushiyama hasn't yet had as intricate a fight as the one in episode 11, in episode 21 we got to see an accurate depiction of the technique hadaka jime (aka a rear naked choke) by blind marksman Toni Anji. Notice how he's grabbing hold of his shirt to lock the choke, like how a jujutsu or judo practitioner would grab their gi. 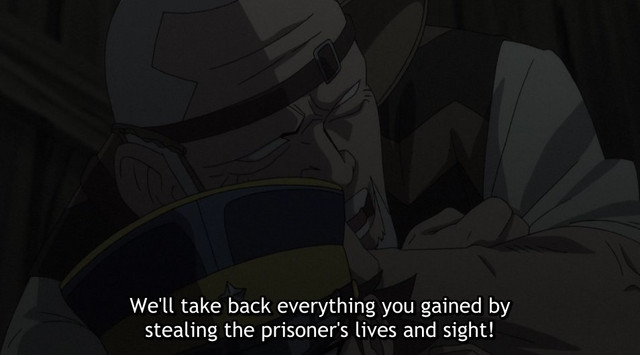 While fighting Toni Anji, Sugimoto goes for another seoi nage, this time tucking his chin to try and drop Anji on his head. It's a very short sequence, but it's safe to say that Sugimoto's regular go-to technique is the seoi nage.

With season 2 of Golden Kamuy over, we're going to have to wait to see if there will be more judo on display. In the meantime, I'll be doing another article soon, this time talking about the history of karate and kenpo as used by the Japanese military, how it's portrayed in Golden Kamuy, and the history of kenjutsu and kendo, specifically Hijikata Toshizou's "Shinsengumi kenjutsu," reportedly derived from Kondo Isami's Tennen Rishin-ryu.

What have you found interesting in Golden Kamuy's martial arts? Have you ever trained in judo or jujutsu? You think you could take Ushiyama? Sound off in the comments and let us know!

Nate Ming is the Features Editor for Crunchyroll News and creator of the long-running Fanart Friday column. You can follow him on Twitter at @NateMing. His martial arts webcomic, Shaw City Strikers, launches January 15, 2019.