The beloved mascot may have fallen on hard times 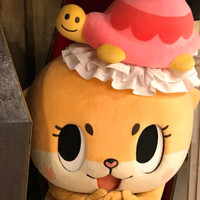 Beloved Tokyo-based mascot and beloved Twitter personality Chiitan has been reportedly fired from their gig as PR mascot for Susaki City due to numerous complaints. Allegedly, the otter was shirking their duties to instead film a series videos they have been uploading to social media. Despite many viral hits, it could be that the lack of any apparent rhyme or reason to each of the short films could contribute to the image that Chiitan. The content of the videos may have been a contributing factor, as they are known for being...

Gone With the Wind pic.twitter.com/CZ8b3Ej3Tl

Basketball is my life pic.twitter.com/U7Bli1Me2N

Battle of the kawaii pic.twitter.com/HKWqk46w8h

Needless to say, we all mourn this alleged unjust action that has been taken against the beloved otter. A hashtag, #JusticeforChiitan has begun to trend on Twitter as fans of the otter demand they be reinstated. Chiitan seems to be taking some time to reflect after recent events.

Although, to be clear, Chiitan’s position with Susaki City was only a small portion of their duties, so it really shouldn’t affect their career. All the same, we don’t want to make them angry…