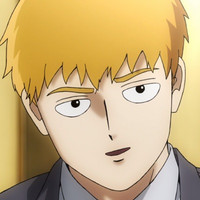 There are obviously tons of reasons to love this season’s Mob Psycho 100 II, from its glorious visual execution to its thoughtful perspectives on self-worth and growing up. But from the first season right through the latest episodes, one of Mob Psycho 100’s greatest strengths has been the hilarious charm of Reigen Arataka, faux-psychic and altogether questionable role model. Reigen deceives Mob Psycho 100’s young star about his own powers, about his deserved salary, and about much else; and yet, in spite of all this, Reigen is simultaneously one of the most sensitive and fully realized parental figures in anime. Simply acknowledging that to myself felt kind of difficult, so I’ll say it again: Reigen Arataka is, in spite of his duplicity and general manipulation, probably one of the best "parents" in anime. 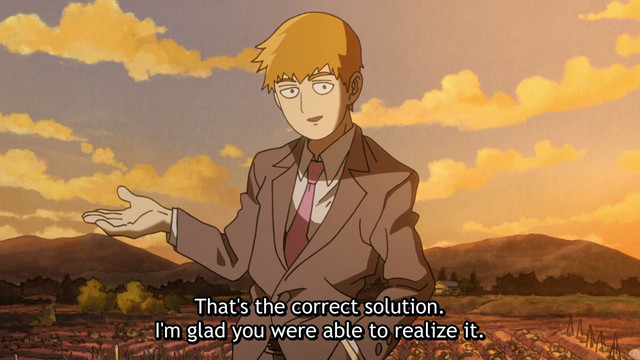 Of course, Reigen does partially benefit from the fact that anime is pretty light on parents in a general sense. As a general rule, the anime we consider when we think of seasonal shows is specifically late night anime, which is a subsect of Japanese animation that’s mostly aimed at adolescents. Because of this, the greater portion of seasonal anime caters itself to adolescent interests, and “listening to your parents” generally doesn’t feature highly on their lists. Teens who are just experiencing independence for the first time want media that validates that freedom, making it no surprise that a great portion of popular anime either intentionally separates its stars from their parents, or never acknowledges their presence in the first place.

Mob Psycho 100 isn’t a youthful fantasy of competency and independence, though. In fact, the reality that we all have to exist together within society, and must constantly compromise to make room for others, is essentially baked into its premise. Its protagonist Mob is forced to consistently reckon with his own powerlessness, find strength in the support of others, and reassess his own perspectives. Even in the show’s recent fifth episode, his most dazzling display of power yet is precipitated by him being “saved” only when he remembers there are people who care about him. Mob Psycho 100 acknowledges that none of us are strong enough to truly do everything by ourselves, and as an extension of this belief, it is far more willing to celebrate mentorship in general, and parenting in particular. 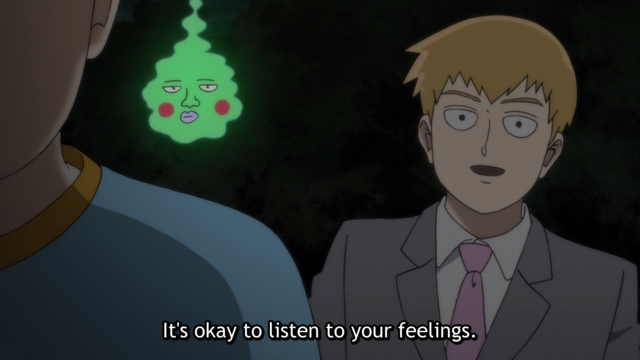 And thus, we have Reigen. Reigen’s relationship with Mob stretches between demonstrating the show at its most comical and at its most emotionally resonant, and when the show is leaning on the absurdity of Mob’s “employment,” it can be tough to see him as a good influence. But in spite of Reigen’s obvious manipulation, he consistently demonstrates clear concern for Mob, a sense of obligation towards actually helping Mob learn, and the sensitivity to know when he needs to stop and listen to this awkward boy. He tells Mob it’s okay to take pride in his strengths, and also tells him that those strengths don’t put him above anyone else. He assures him that it’s okay when you can’t face problems yourself, and that sometimes you’ll need to reach out to adults for help. He puts in the work and attempts to connect with Mob on his level, presenting not just some distant model to emulate, but an active and attentive supporter for all of Mob’s feelings.

In light of this, I actually find it appropriate and ultimately reassuring that Reigen is often such a mess of a person. Reigen is not an unapproachable icon of unquestionable maturity: he’s a screwup who’s constantly making his own mistakes, awkwardly running from situations he can’t actually resolve, and perpetually reassessing what he’s supposed to be doing. All of that stuff doesn’t make Reigen a bad parent, it makes him a real parent, a parent as portrayed by people who’ve actually done some parenting. Just like how Mob’s consistent failings ultimately demonstrate the difficulty of growing up, and the reality that none of us have truly figured it all out, so too does Reigen’s fallibility demonstrate that just because you’re a mess of a person or unsure of your own destiny, that doesn’t mean you can’t have a profound positive impact on the lives of others. Great parents make mistakes too; they try their hardest, but in the end, it is far better to be an available and occasionally messy person than an infallible example of adulthood to look up to, but never truly connect with. 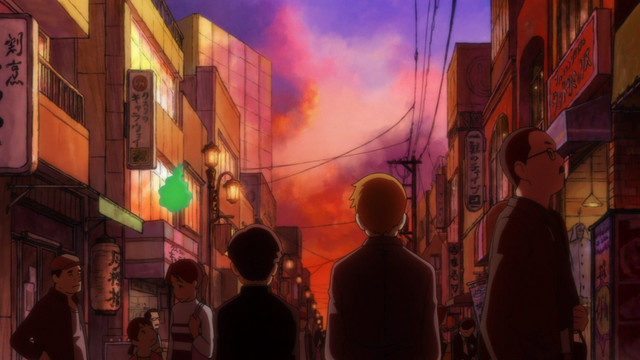 And Reigen is growing, just like all of Mob Psycho 100’s richly illustrated stars. Though he’s possessed concern for Mob since the very beginning, he’s lately become more and more attentive to Mob’s emotional shifts, and encouraging of Mob’s efforts to express his own feelings. He's made terrible mistakes, but he's directly acknowledged them, and through this process come to understand that Mob's respect and trust means more to him than anything. Few anime emphasize the perpetual emotional responsibility of parenting, but all through Mob Psycho 100’s second season, Reigen has been doing his best to live up to the person Mob believes him to be. He might shortchange some misguided ghost hunters and puff up his own accomplishments, but Reigen’s concern for Mob is utterly genuine and deeply felt. When Mob doubts him, he doubts himself, and when Mob believes in him, it doesn’t matter if the rest of the world is against him. It’s been a joy to watch Reigen help Mob with his trials, and I look forward to seeing them grow together for many adventures to come.

I hope you’ve enjoyed this discussion of Reigen’s parenting style, and please let me know all of your own favorite anime parents in the comments!