Dead or Alive 6 Delivers on All Fronts... Except One 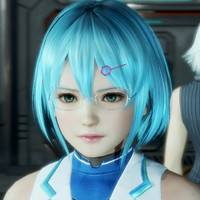 I've deflected, I've made jokes, I've talked about how it's Virtua Fighter's prettier, dumber cousin, but the truth is simple: I love Dead or Alive, and I'm happy to have it back. It's been three and a half years since Dead or Alive 5: Last Round and a whole seven years since DOA5 proper, and the time taken to polish this latest installment was worth the wait. Dead or Alive 6 is a great ride and totally worth bringing all your friends along to beat each other up... even if there's one thing they "fixed" that wasn't broken, but I'll get to that later.

A new Dead or Alive always means new characters, and one of the nicest things in 6 is seeing even the most recent newcomers being treated like part of the family. DOA4's newcomers Kokoro and Eliot pop up for serious character exchanges or goofy hijinx (or a bit of both), while 5 newbies Rig, Marie Rose, and Honoka take center stage for the latest story mode (not a whole lot of Mila, unfortunately, but she's there too!). This focus on new faces doesn't take anything away from any of the cast you know and love, reminding you that yes, Kasumi is still emo and Ayane is a giant jerk. 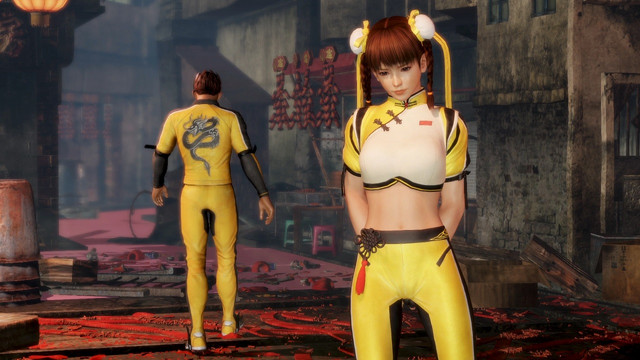 Dead or Alive 6's two newest fighters are rough-and-tumble American brawler Diego and very capital-A ANIME scientist NiCO, both bringing new fighting styles and plot entanglements to DOA. Diego's a styleless badass who hits hard, with satisfying weight behind every punch and kick--it's a nice change of pace from DOA's usual expert martial artists, instead just focusing on a tough, gutsy dude who can fight. NiCO, on the other hand, is all speed and intricacy, representing the Indonesian style pencak silat (go watch The Raid), with fast handwork and tons of mixup potential... and the insane electricity powers she pulls out for her really hard hits. 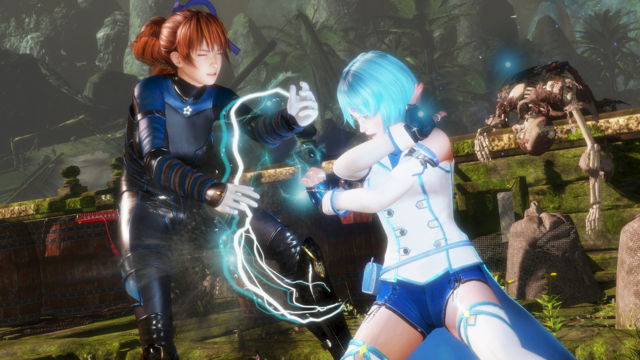 The mechanics of Dead or Alive have shifted and grown over time--stage hazards, moving from 4-way to 3-way Holds and back again, toning down the damage and window for Holds to focus on perfect timing, and more, slowly pushing DOA to be more competitive, at the cost of some of its flash and the massive damage you could dish out. A fifth button has been added: Special, which gives a simple autocombo that stuns an opponent and can end in a super (Break Blow) if you have a full meter. Half of the meter can also be burned for a get-out-of-jail-free universal counter that puts you behind your opponent, setting them up for a counterattack.

These are good mechanics and a welcome addition to DOA's "triangle" of strikes, holds, and throws--they don't add another segment to that "triangle" (which would, uh... not make it a triangle any more) as much as add another option to strikes and holds, and is just a new system we'll have to practice and get comfortable with. I'm loathe to sing the praises of a comeback mechanic, but there's enough give and take in this to not make wins feel undeserved--and enough chances to turn things around on a player who's relying on it too much. 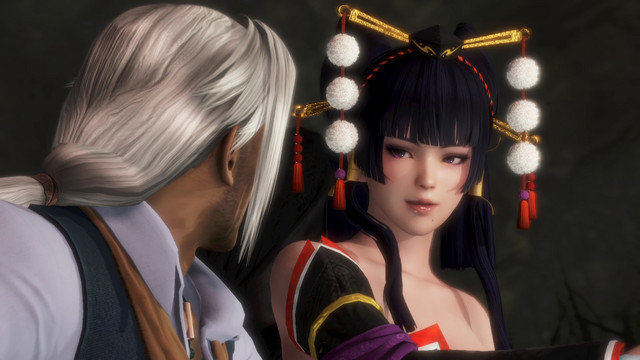 All the familiar single-player options for DOA are available right from the get-go--an Arcade Mode, Survival Mode, Score Attack, and my favorite--Command Training--are there right alongside a full Story Mode that gives you a chance to play through a bunch of story threads and see what everybody's doing during the sixth DOA tournament. The real star, though, is DOA Quest, a lengthy series of character challenges that's the main way to unlock Dead or Alive 6's sizable costume wardrobe.

DOA Quest will pit you against one or more enemies, with three quest objectives. These can be very easy (clear the quest!), very specific (land a specific move), technically demanding (land a set number of combo throws), and sometimes downright infuriating (perform a Hold on 6 mid kicks... and the CPU won't throw a single mid kick). You're either flying through the challenges or stuck on a particular one, with very little in-between... and maybe that's the point. DOA Quest is, at least to me, an interesting way of teaching me more about the game simply by making me play the game--at any point before or after a challenge in DOA Quest, you can get directed to a tutorial on your character's strengths or a specific mechanic, so you're not left in the dark when you're suddenly asked to perform an Expert Hold or a Hi Counter Launch. 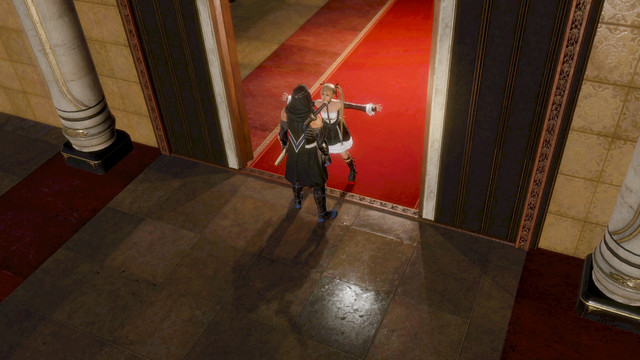 Some fighting games are all about unlocking characters, or maybe weapons in SoulCalibur's case--Dead or Alive is all about unlocking costumes. (Female) characters have whole wardrobes to choose from, and even the dudes get a few more outfit changes than normal this time around. It's easily my favorite part of Dead or Alive as a whole... so believe me when I say that unlocking costumes is the single most infuriating part of DOA6.

Before, it was simple--beat the game with a character on [difficulty] in [mode] to unlock a costume for that specific character. Now, clearing Arcade Mode or doing challenges in DOA Quest will award you with "Costume Pattern Parts" for a random character--not the one you just played as--and then when you've earned enough Costume Pattern Parts, you've unlocked the costume, right? 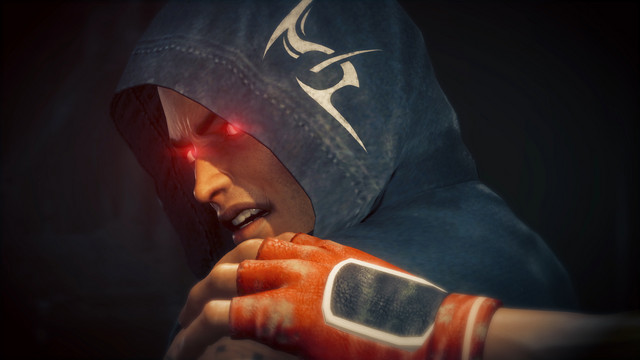 No--that just means the costume is available for purchase in the Wardrobe. Now you have to spend Player Coins (in-game currency you also earn by just playing the game) to actually unlock the costume. It's an unnecessary extra step that feels like it's there just to pad out the single-player portion of the game (some grumbling about Dragon Ball FighterZ's story mode goes here). DOA Quest is the only viable way to earn Costume Pattern Parts, too--they're handing out between 2-500 Pattern Parts per challenge, while Arcade Mode hands out between 5 and 10, also for random characters. Unlocking stuff is still nice, it's better than buying a costume, but I feel like I'm doing a bunch of busywork where I don't know what the end result is gonna be... but at least there's no duplicates. 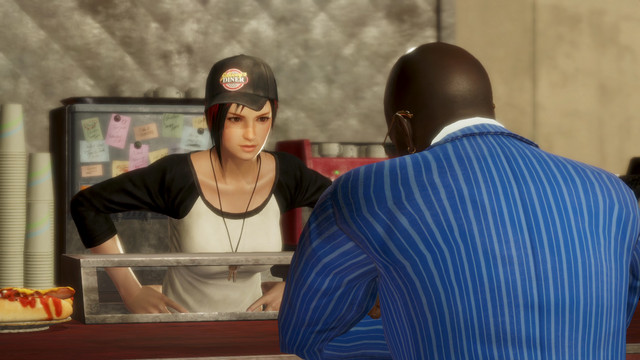 "Calm down, Nate, it's just a video game"

Even with that personal frustration, Dead or Alive 6 is a total blast, and the "busywork" is still playing a great, fast, fun fighting game, one I'm gonna come back to again and again. Team Ninja knows what they do best, and this is it, right here.

+ New mechanics give something exciting for new players, while still technical enough to keep things balanced

+ New (and returning!) characters are great additions to the cast

- Unlocking costumes has become a tedious, multi-step chore with random results (but thankfully, no dupes)

Tags
dead or alive 6, dead or alive
« Previous Post
QUIZ: Can You Survive Kaguya-sama's Battlefield of Love?
Next Post »
Kill la Kill — IF Fighter is Coming to Europe via Publisher PQube
Other Top News
9 Comments
Sort by: