Is STEINS;GATE ELITE Worth Risking the Timeline For?

The Future Gadget Laboratory team is back in this new edition of STEINS;GATE, but is it worth your time and money? 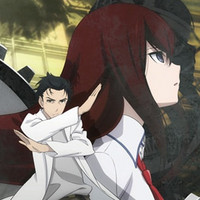 Growing up in Puerto Rico, learning English was something of a challenge for me when it inevitably reared its head; thanks to Pokémon Red, my reading skills improved dramatically thanks to an interest in video games and wanting to understand them as I played along. Fast forward many years after that fact, and I found myself deeply in love with visual novels and sound novels, playing titles like Higurashi and Umineko, those kinds of games (especially otome games!) becoming one of my favorite to play! Along that route, I first encountered STEINS;GATE. I've heard buzz building about the game, and then the release of the anime, which made me deeply interested in both playing and watching the series when I was able to get my hands on it. What I found was a deeply involved story of vibrant, unique characters, dramatic action, and a tense, smart Sci-Fi plot that revolved around time travel in a way that certainly tried to deal with the realistic consequences of choices and action. Ten years after its release, we’ve been presented with a new version: STEINS;GATE ELITE, a somewhat ambitious mixture of both the anime and visual novel adaptation!

One of the first things I noticed about STEINS;GATE ELITE on the Switch was the fact that portability was a great benefit to the visual novel experience. Being able to take the game with me and play through the story over time at my leisure made it a far more relaxing time than having to portion out sections of my day to play the game uninterrupted; being able to pick up and play STEINS;GATE ELITE at any time really made the entire experience a lot more enjoyable and organic, making it fit my schedule more than anything else (although, in all honesty, I still ended up marathoning the game a lot). However, some of the new wrinkles presented in STEINS;GATE ELITE made this occasionally a bit awkward; still, if you have the choice, I highly recommend playing the game on the Switch in portable mode to experience the game on the go and when you can get the time. As a warning, I will say that while the game looks good in docked mode, it occasionally felt like the graphics were stretching or not quite meant to be transmitted from the Switch to a TV, meaning that it's best to play the Switch version in portable mode for both ease of use, and just for the best way to ‘view’ the game. 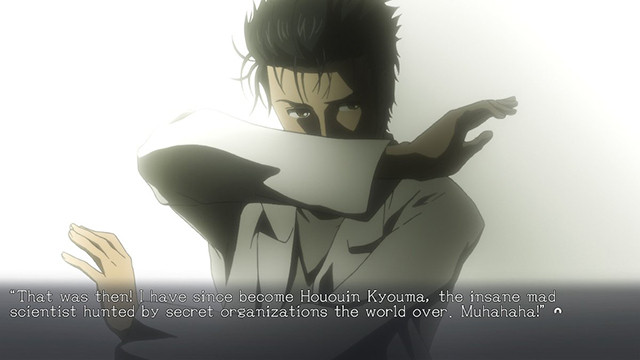 As I mentioned, there are a few wrinkles to this new version of STEINS;GATE that initially caught me off guard. The game is a mixture of the anime with the visual novel script, with Huke’s CGs replaced with scenes from the anime. This works pretty well overall, since the anime was a faithful adaptation that took few divergences, but it also means that the story plays out a little differently in terms of how scenes progress in the sense of time progression. Sometimes, reading through sections I’d already seen due to a bad ending, I noticed that the game isn’t really well equipped to deal with someone mashing through the dialogue at a faster pace than it is ready to go, causing character’s mouths to move when things aren’t being said, or almost as if the scene is playing on a certain timer that is somewhat independent from the text itself. This isn’t a huge deal or any sort of deal breaker, but it was a somewhat awkward situation when it did occur; depending on your speed of reading and how fast you want to get through the game, this issue may come up for you more or less than it did for me. 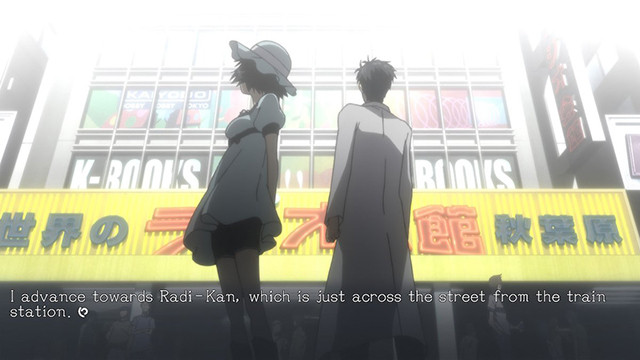 Those changes aside, I have to say that STEINS;GATE ELITE is probably one of the best, if not the best, version of the game that you can get. Whether you’ve never played the game before, or you’re revisiting the game after some time away, this version presents you with one of the nicest, most complete overall packages. All of the content of the original game are here, with all of the endings and choices included; there’s nothing missing from the original game for the sake of making the anime scenes fit. Instead, you sometimes just get some still frames or repeated animations while characters talk. Perhaps the biggest direct change has to do with the D-Mails and other choices; instead of having to hunt them down yourself when they might be available, STEINS;GATE ELITE simply pops up a menu and gives you your options immediately upon reaching a certain branch. While the freedom to stumble around is part of a charm in a visual novel, it can also be a bit hard to figure out for some people, and I can see why this change benefits the game overall by streamlining the whole experience. And, in many ways, that’s what makes STEINS;GATE ELITE unique: the combination of various STEINS;GATE versions into a streamlined, unique final package of the main storyline. 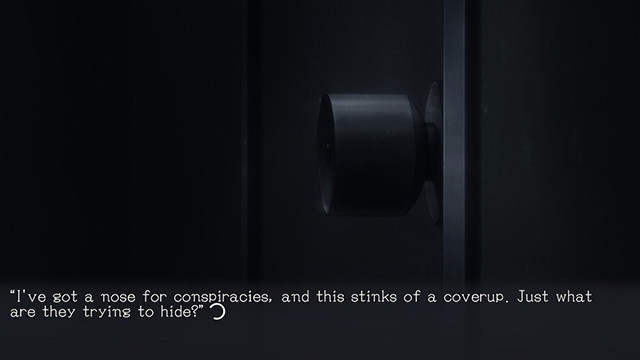 Content wise, everything is here that you can expect to find in the original: the humor, the drama, tragedy, action, and shocking moments are all present. I don’t want to say anything more in case this is your first time through, but if you’ve seen the anime, you will end up seeing some things you didn’t see the first time around, making the game a real treat for you to better explore the STEINS;GATE world. And if you’ve only played the game, seeing the anime counterpart designs in motion next to the script with all of the returning voices is pretty interesting; just playing through STEINS;GATE ELITE makes me want to watch the anime all over again! One of the best aspects of the VN is the various endings you can get, both good and bad. Finding your way to the true ending is worth the overall reward of playing through the game, so do yourself a favor and grab STEINS;GATE ELITE if you’ve never had a chance to play it before. If you have played the game previously, this version might be something to debate buying, as there’s nothing really new or different other than the visuals, so unless you want to play through STEINS;GATE again with different visuals, there’s not really a lot here that you haven’t read or seen before. 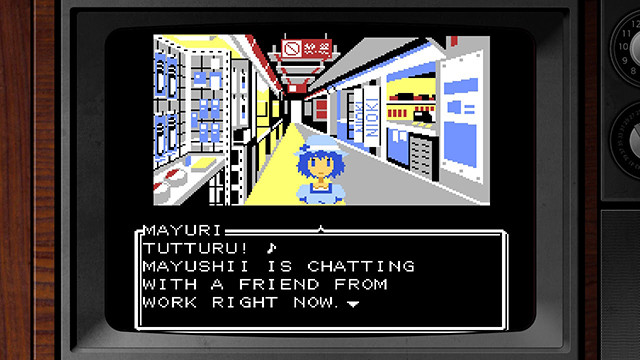 Depending on which version you buy (I played the Switch version) you'll get some extra content outside of the game. The PS4 version of the game comes with Linear Bounded Phenogram, which follows small short stories of the main cast in various circumstances. The Switch version comes with 8-BIT ADV STEINS;GATE, a unique throwback to NES era adventure games, complete with 8-bit renditions of STEINS;GATE music and sound effects (including Rintaro’s laugh). I have to say that 8-BIT ADV STEINS;GATE is a somewhat charming, if a little frustrating, additional game. While the Linear Bounded Phenogram stories provide some extra background and peeks into character’s thoughts and actions, 8-BIT ADV is essentially just the main game reduced down into a few hours of simple adventure game play. Basically, don’t play 8-BIT ADV until you’ve played the main game, or you might find yourself spoiled! My frustration for this little side game comes from the fact that you can’t save at all; while the game doesn’t really have a lot of choices, it does actually have a few abilities to reach a game over state, and doing so starts you all the way back at the beginning… with no ability to pick up where you left off. It's a bit too faithful to the NES era of adventure games, that's for sure! As a fan of visual novels, one of the big joys is making save files to see what happens, but in 8-BIT ADV your choices are rewarded with… doing everything all over. The game itself isn’t very long, but even at 2 hours, that’s a lot of time that you can spend only to have to redo everything again. The graphics and music, plus the retro adventure gameplay, are pretty fun. If I had to choose personally, I’d probably opt for the Linear Bounded Phenogram extra content. 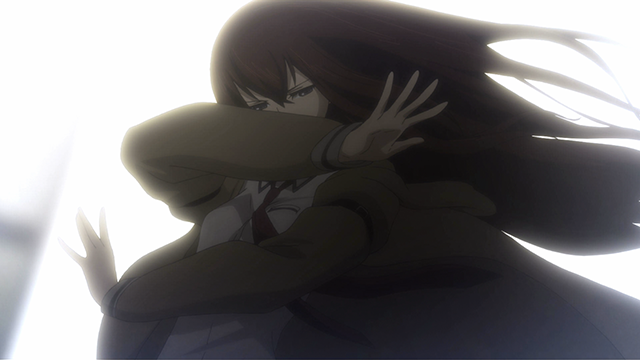 Whether you’re a new visual novel player, curious to try out the game after watching the anime, or an experienced visual novel fan who just loves reading their favorite stories over and over again, STEINS;GATE ELITE is a great game either way. I really enjoyed seeing the Future Gadget Lab group’s antics all over again, and as I finish off my first Dr. Pepper in a long time, I remember how much I enjoyed the game and the experience the first time around! And, at the end of the day, I think that’s the best review I can give it: STEINS;GATE is great, and this version maintains that greatness. So don’t wait for John Titor to take you along on their time travel adventures to get your hands on the game, go grab STEINS;GATE ELITE now! (Also, Kurisu is best girl! <3)

+/- the mixture of anime and visual novel script, though, might turn off visual novel purists or people who read faster than the game expects

- There’s really not much ‘new’ here, and 8-BIT ADV is a cute distraction, but not much else; if you played STEINS;GATE before, you won’t find much new to do here

Did you pick up STEINS;GATE ELITE? Are you a fan of the VN or anime? Let us know what you think of the game in the comments!

Tags
steins;gate, steins;gate elite, games
« Previous Post
How Big Mom Has Changed The Course Of One Piece
Next Post »
Fur is Going to Fly in GLEIPNIR TV Anime
Other Top News
1 Comment
Sort by: