Mob vs. Suzuki is the Truest Culmination For Mob Psycho 100

It's being nice versus being cold and wanting all the power! 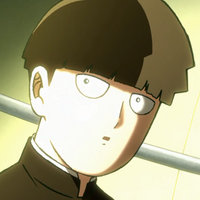 The entirety of Mob Psycho 100 would’ve been a different show if Mob was the type of person who didn’t try to find the best in people. If he’d not surrounded himself with good people—those that have his back and believe in him—who knows what he would’ve done in that case. Maybe his power would have gone to his head, causing him to lash out at a world that he felt betrayed him. Perhaps he becomes a shut-in and tries to protect the world by not engaging in it. As we near the end of Mob Psycho 100, these are the types of individuals Mob is running into, including the head of Claw who is perhaps Mob’s greatest nemesis—someone who can match Mob power-wise, but isn’t empathetic.

I speculated around the midway point of the series that Mob would find someway to further hone in his powers to have better control of them. That’s become partially true as even when he went off the percentage scale, he wasn’t fully out of control. However, what’s been his biggest strength is his ability to find ways to avoid having to fight. It’s what’s made his encounters with the Ultimate 5 intriguing since they haven’t been fight after fight after fight. 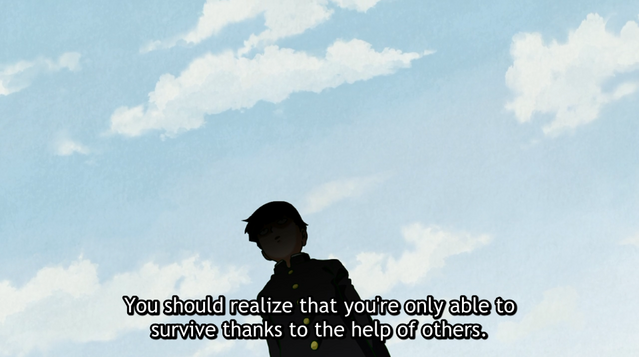 Take for example the confrontation with Serizawa: one of the most powerful members of Claw and the Ultimate 5 taking on Mob. Here, you’d think they’d go all out with their esper abilities as Serizawa attempts to keep Mob from reaching Suzuki. For such a relatively big encounter, there’s not much in the way of combat. Outside of a big attack that Serizawa accidentally sends to Mob, it’s more of an intense chat than a fight. Mob’s biggest attack here is just being blunt.

Mob mixes empathy with brutal honesty to eventually wear down Serizawa and forcing him to confront the error of his ways and see just how similar he and Mob are. It’s Mob at his best and how the show pushes forth the idea that being a good person is rad. Having all of the power in the world isn’t going to make you feel better or less lonely if you’re a person who doesn’t care. Which of course, leads into Suzuki and the parallels he shares with Mob with regards to the pursuit of power and having empathy for others. 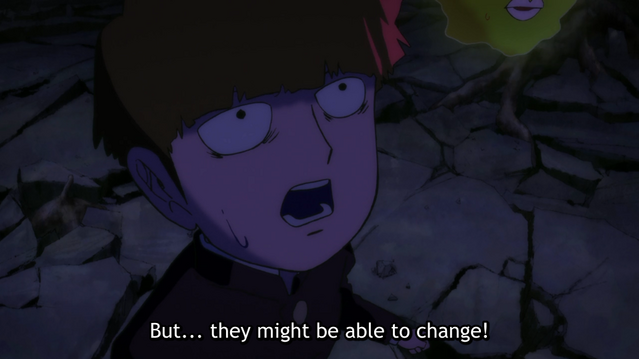 Suzuki is Mob if Mob hadn’t found people that would look out for him. He’s cold, calculating, and doesn’t want to let anyone see his true nature. If he’d let his power go unchecked and turned on the world for thinking his esper powers were bizarre and troublesome. That even brings up a what-if scenario of Mob down on his luck joining Claw. Instead, we have a true showdown of power that will become the culmination of the entire series. Which ideology will reign supreme: pure power or being a good person?

What hurts Mob initially is perhaps being slightly too naive. He thinks he can win over Suzuki in the same way that he did Serizawa—with empathy. It worked before, why wouldn’t it again? The problem is that Suzuki is too far gone to be swayed by Mob’s pleas to see the good in everything. Given that he’s ready to destroy everything, rebuild it in his own image, and show that he is the most powerful being in the world, Mob would have to be the most charismatic person to crack that armor. He does do one thing that gets Suzuki’s attention—be a worthy opponent. 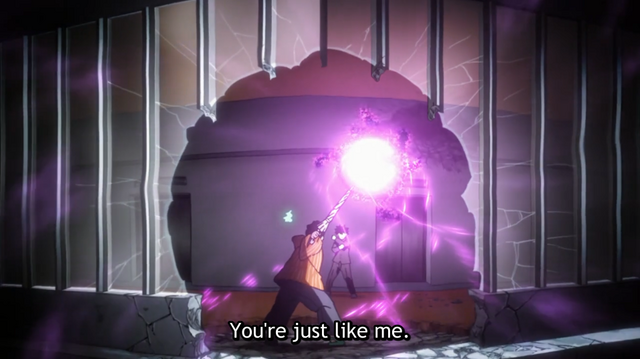 Not only are Mob and Suzuki contrast against each other with their ideals, they become even more linked when Mob shows he essentially has the same power as Suzuki. The ability to give and take esper energy from others. That’s concerning to Suzuki as that is encroaching on his ability to be the most powerful person if there’s another just like him. It’s dangerous for Mob as Suzuki now has to put forth effort in order to dispatch Mob, which even at 10% of his power, he’s able to fling him around like a ragdoll. If you think that’s going to stop a powered up Mob though, you’re very mistaken.

It’s also beneficial that Mob has a large support system just outside of where this fight is happening including Reigen who showed up to try and give him a helping hand. Even when it almost ended very badly for Reigen as he angered Suzuki but was saved by Serizawa, Mob can further see just how much people are willing to do what they can to save him. It’s that support system that could be the upper hand that he needs in order to find a way to turn this fight around. 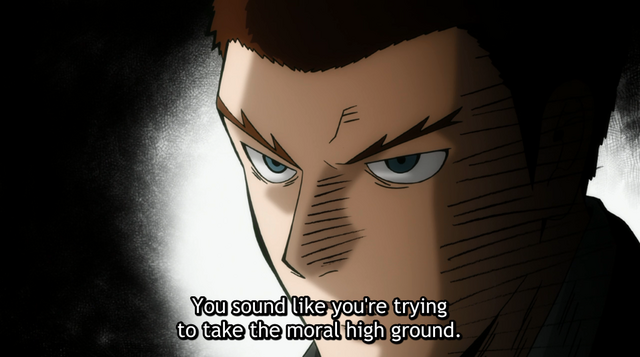 One of the big questions as we head towards the finale is will Mob have to go off the percentage scale to stop Suzuki? What’s more terrifying to think though is what will happen that would cause him to activate that again. As he’s already at a 100% rage output, he can certainly do damage, but at the same time, he’s running into the issue of Suzuki not even being at the same level of power. Yet, as we’ve seen through the series and the encounters with the Ultimate 5, Mob isn’t about going power for power with foes. He dispatched them with empathy and lets them see where things went wrong and how there’s a chance to change. After all, he’s already said he believes that people have the ability to change, so Suzuki should have that chance in Mob’s eyes as well.

Could you handle yourself in the same way as Mob when faced with this kind of danger? Let us know in the comments below!

Do you love writing? Do you love anime? If you have an idea for a features story, pitch it to Crunchyroll Features!
Tags
mob psycho 100
« Previous Post
Crunchyroll Staff's Winter Anime Favorites!
Next Post »
The Eternal Knight: Celebrating 80 Years of Batman
Other Top News
3 Comments
Sort by: