Become a Good Person. That is All. 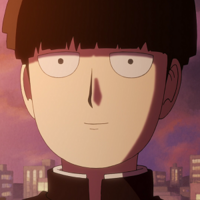 Mob Mondays may be over, but I just can’t seem to let them go. For a show about an average, everyday middle schooler, Mob Psycho 100 was nothing short of extraordinary. While its first season was tremendous, Mob Psycho 100’s second season set it apart as the once-in-a-decade show it is. It was a rare kind of anime, the kind that’s always delivering itself at full 100% quality. Both seasons have been nothing short of impeccable—the latest even more so. Whether it was delivering raw action, lighthearted comedy, or heartwarming life lessons, the team behind the show clearly poured their whole hearts into it. It may have ended, but I’ve yet to get over it. This show blew my mind at every single twist and turn. Another season chocked full of brand new anime is fast approaching, but before it gets here let’s pay tribute once again to Mob Psycho 100 and the myriad of ways it blew us away. 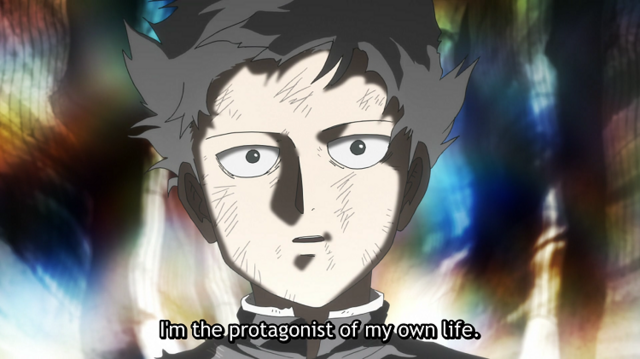 Let’s start at the beginning—the opening, specifically. From start to finish it’s an explosion of kaleidoscopic visuals and mind-bending transitions that perfectly exemplify what one can expect from any episode of Mob Psycho 100. It’s filled to the brim with winks and nods to moments big and small from throughout the series, providing both cheeky fanservice for established fans and tantalizing hints of stuff to come for first-time viewers (Oh my god, THE BROCCOLI!!!).

Add it’s wide breadth of psychedelic visuals to the head-banging, pulse-pounding beats of Mob Choir’s single “99” and what you get it a strong contender for one of the best anime openings I’ve ever seen. It’s an instant eye-catcher and endlessly rewatchable. Whenever I need to get someone interested in Mob Psycho 100, I’ll just play that opening and watch it work its magic on them. 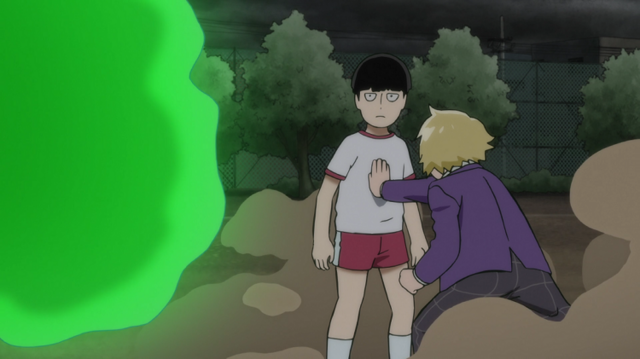 Then there’s the most obvious aspect to consider when talking about the ways Mob Psycho 100 blew us away: the action. Oh lord, the ACTION. Studio BONES is no stranger to well-animated action, having produced anime such as Blood Blockade Battlefront, Concrete Revolutio, and My Hero Academia. Their awareness for action comes through in spades in Mob Psycho 100 though, knocking each and every set-piece completely out of the park.

Some of the first fights that come to mind as examples of fantastic action sequences come in Mob’s first season. One being the fight between Teru and Mob. It’s the first battle between espers in the series, and boy does it deliver. Prior to that point, we’d never seen Mob use much of his power. Teru being both an incredibly powerful and ambitious esper, eventually drags way more out of Mob than he bargained for. The results are fast-paced, flashy, and massively destructive. Every moment of the fight is carefully rendered to convey the sheer force both espers are unleashing on both each other and the environments around them. 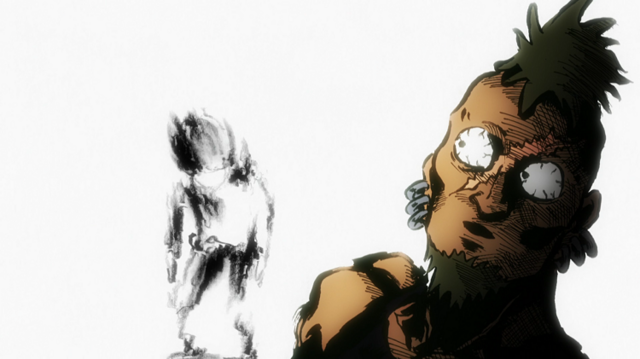 Another that stood out to me when I first watched it is when the Scars finally reveal themselves with Koyama’s abduction of Ritsu. We see another batch of firsts in this fight. Prior to this battle, the only espers in Mob Psycho 100 had displayed very similar telekinetic powers. Koyama, however, uses his psychic powers in a much more physical way, basically powering up his fists and attacking like a street fighter in an all-out brawl. It’s also the first time we really see Mob struggling and being brutalized by an enemy. It’s a pivotal moment in the series, and is portrayed with the weight it deserves. Koyama’s attacks are rough and brutal to watch, and Mob’s enraged form is adequately terrifying to behold.

The one that takes the cake, though, is one I can confidently label one of my favorite anime fights of all time: Shimazaki vs. Everyone. Better writers than me have already dissected this fight to greater length than I ever could, but I’ll attempt to anyway. What we have here is an extraordinary achievement of imagination handed over to some of the best animators in the industry. The result is a top-notch, balls-to-the-wall fight with some of the most powerful espers in the world squaring off against one who’s virtually invincible.

There’s a moment early on in Naruto where Sasuke finds his Sharingan useless against Rock Lee’s taijutsu. Lee mockingly informs him that just reading ones movements accomplishes nothing without the physical ability to react to them. Shimazaki, then, is like a character created solely to defeat Rock Lee’s taijutsu (fittingly, he’s voiced by Noriaki Sugiyama—the voice of Sasuke Uchiha). Shimazaki doesn’t just possess powerful telekinetic ability, he also has the ability to foretell his opponent’s movements. Of course, that’s useless without the ability to react to them, so he was also blessed with the gift of teleportation. Not only does he know exactly how an enemy is going to attack, he can instantly teleport away and counter with a devastating attack of his own.

So then, how do Ritsu, Teru, and the reformed Scars attempt to counter such an unstoppable combination of powers? Well, with sheer brute force and a few combos of their own. Shimazaki’s foresight requires concentration, so they come at him with a sheer barrage of nonstop attacks, and it’s all painstakingly rendered so that each attack flows seamlessly into the next. I could try to go into detail, but you know what? It’s probably better if you just watch the clips for yourself. I’ve watched this fight more times than I can count already, and each time I’m left asking, “How the hell did they do that?” The word “budget” gets thrown around a lot regarding impressive sequences of animation, which I think is a massive disservice to the people who animate them. You don’t get this kind of quality by just by throwing money at a project. You can only get it by having a talented team of hardworking artists with the time, resources, and skill required to stand as the forefront of what your craft can accomplish. 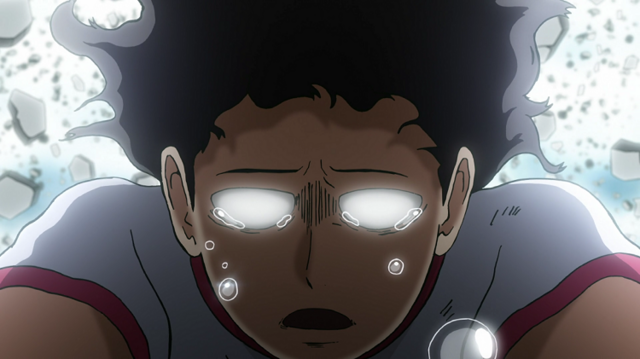 Where Mob Psycho 100 blows me away the most, though, more-so than it’s flashy opening or incredible action, is in the lengths it goes to be uncompromisingly empathetic. Mob Psycho 100 might happen to be an anime with intense action and crazy battles, but at its core it’s a show about a kid learning to be just a little more confident in himself. The opening episode of season two doesn’t feature any kind of high-stakes action, but it stands as my favorite episode in the series for its central purpose of teaching Mob that he can’t live just appeasing others. In the end, doing only leaves both yourself and the people who see through you a little more miserable. Considering your own feelings is a healthy step towards self-confidence. 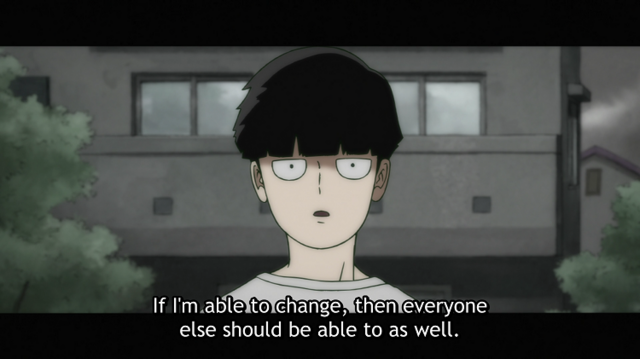 Of course, what really sets Mob Psycho 100 apart for me is in the distinction it makes between self-confidence and self-importance. A commonly held belief between all of the series’s antagonists is that their powers set them far apart from the rest of the human race. The more powerful they are, the more they believe themselves worthy of controlling those they believe are beneath them. At one point, Reigen chastises the Scars for their childishness. After all, they dress up in costumes and refuse to consider how their actions may affect others. Selfishness is a behavior found in brains too young to have developed empathy, so a selfish adult is one who never quite grew up.

It might be easy to misconstrue Reigen’s philosophy as one of conformity. After all, his lecturing does lead them to seek out more normalized lives, and both Muraki and Serizawa don plain suits—the uniform of modest salarymen. I thoroughly disagree with this, though. What Reigen, and Mob Psycho 100 as a whole, condemns is not individuality but rather escapism and individual superiority. What the show asks of its viewers is that they learn to face reality and find their own just place within it.

This philosophy is best expressed in the scene where a young Mob first meets his soon-to-be master Reigen. Afraid of his own power, Mob seeks Reigen’s advice on how to control it. Reigen of course lies through his teeth about himself having psychic powers, but ends up giving legitimately good advice anyway. He tells Mob there’s nothing positive or negative about being an esper. It’s a characteristic as normal as being smart or smelly. True charm comes through kindness alone.

“Become a good person. That is all.” 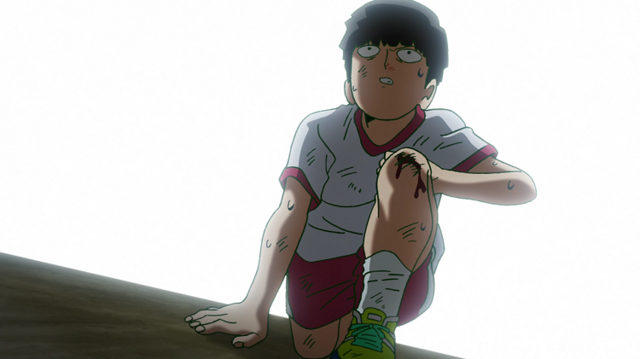 My own journey for self-improvement has had some highs and lows over the years. Each and every step I’ve taken was influenced by any number of things around me, and I’m proud to report that Mob Psycho 100 helped me take the latest. While writing this piece I added an activity to my morning routine. After watching Mob steadily improve through the Body Improvement Club’s training led me to start some training of my own. It’s a light workout—and nothing compared to the training I did when I was Mob’s age—but it’s a start. After all, if I keep improving little by little, I’ll find myself in a better place than I was before.

What were YOUR favorite parts of Mob Psycho 100? Let us know in the comments below!

-----
Danni Wilmoth is a Features and Social Videos writer for Crunchyroll and also co-hosts the video game podcast Indiecent. You can find more words from her on Twitter @NanamisEgg.

Crunchyroll All-Stars: Larry Ogunjobi on Going to Conventions from Anime Expo to Japan