Sarazanmai's first episode had lots of butts and kappas, and AniTwitter can't seem to get enough of it 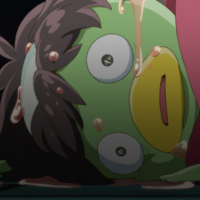 Auteur director Kunihiko Ikuhara is known for his dazzling visuals, big ideas, and bold statements about society, sexuality, and the sublime. With a strong directorial voice and a resume that includes Sailor Moon, Revolutionary Girl Utena, and Penguindrum, every new anime with his name attached attracts critical interest, and with a penchant for the dramatic and bizarre, each of those anime also attract confusion, shock, and awe.

When Sarazanmai premiered yesterday, it was no different. People lost their minds. Maybe this GIF will give you some understanding as to why:

this show is WILD (via Sarazanmai) pic.twitter.com/Xhv4bNxcie

You can (and should!) watch the episode for yourself, but if you want to see how folks are handling the first episode before you jump in, read on - I’ve collected some of the best reactions from AniTwitter, while avoiding anything that would reasonably be considered a spoiler that wasn’t in the show’s trailers. Enjoy!!

I don't think I've ever watched something as crazy as Sarazanmai before.

I think Sarazanmai changed me as a person,,,,
This is gonna be an absolute wild ride

Gegege no Kitaro: Here's an episode where kappas go wild and rip out everyone's butt balls

MAPPA WHAT THE-???? WTF DID I JUST WATCH??!!! SARAZANMAI IS WILD!! Anyway, looking forward to the cops, Hosoyan and Mamoru always make a great team ????

latter half of the episode was a visual treat

I would like to talk about this insignificant cut from Sarazanmai - did you need to animate the door bouncing back on itself? No, but you did that and I appreciate it. pic.twitter.com/EpwjJzRv83

I'm gonna have to watch that at least 3 more times before I can form a coherent thought #さらざんまい pic.twitter.com/nllzfs5HaL

You: what is sarazanmai about?
Me: pic.twitter.com/9VJ93yDcht

sarazanmai: (whatever the hell all that was)
me: pic.twitter.com/HfEGU7Lsej

I have one question about Sarazanmai

I legitimately cannot even take screenshots of Sarazanmai #01 without screenshotting every frame of the episode... that was a masterful premiere and only reaffirms my opinion of Kunihiko Ikuhara being one of the most inventive and creative storytellers of all time. pic.twitter.com/1OuaFnFuQL

i should've watched all of these premieres earlier, because now i'm comparing them all to Sarazanmai's premiere and it's making everything else look bad

Words and screenshots cannot come even close to describing what it's like to watch the first episode of Sarazanmai.

But I loved it. pic.twitter.com/NDNIS2sXcr

Sarazanmai episode one: I knew it was gonna be Like That, but why did it have to be so much of That

This show is Art #sarazanmai pic.twitter.com/99SZPzQgYV

That first episode of Sarazanmai was wild. Be sure to keep your distance from the kappa statue in real life ;p #さらざんまい pic.twitter.com/OCAUGetp2Y

PLEASE WATCH SARAZANMAI YOU WILL NOT BE DISAPPOINTED LMAOOO THIS WAS SO WILD!!! pic.twitter.com/zlJSYxdbF2

one of the strongest first episodes ive ever seen
time to rewatch it again multiple times
i rarely talk to my mutuals (or write tweets like this at all pff) but pls give sarazanmai a chance pic.twitter.com/2B2IHxChje

Sarazanmai gave me the wildest what the hell did i just watch. it was also very ikuhara pic.twitter.com/3mMCeSUv7A

If after all that, you're still not convinced, or if you’re looking for a spoiler-free primer on the series before diving in, I can’t help but recommend the fantastic feature Anime News Network’s Lynzee Loveridge put up, featuring a works cited section longer than most papers I wrote during my undergrad - pretty telling as to the kind of work Sarazanmai is. I hope you enjoy it as much as I did!

As for the next episode...

i don't want to keep flooding twitter about this as i am sure many people uninterested are tired of it.. but episode 2 of #sarazanmai is one of few episodes of anime that had me LITERALLY HOLDING IN SCREAMS if i'd been in my house i would have been SCREAMING. ep 2 is SUPERIOR.