Appreciating Some of Anime's Finest Vampires on Bat Appreciation Day

From DIO to Alucard, a small sampling of some of our toothy faves 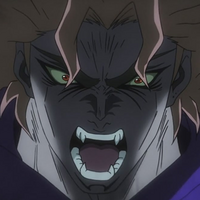 April 17 is Bat Appreciation Day, and there's plenty to love about everyone's favorite creatures of the night: their pointy little teeth, the way they swoop in on their prey in the dark, their cool castles, their fancy long coats...

Oh, wait. Those are vampires, not actual bats. Well, we might as well go with it! Today, we're running down a list of just a few of our favorite vampires from the world of anime. Whether they're cute, menacing, regal, or just plain weird, we keep a place for these awesome bloodsuckers in our hearts.

Did your favorite make the list? Are there any you want to share your appreciation for? Name-check your faves in the comments! First, though, it's time for ours. In no particular order (because all vampires are Best Vampire today): 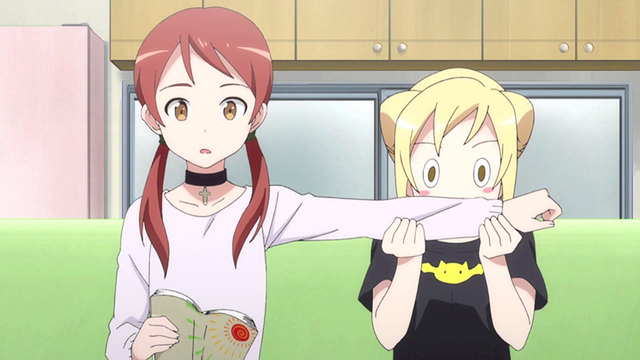 Interviews with Monster Girls put a new spin on what it means to be a mythical beastie. In the world of the series, vampires, dullahans, and yuki-onna exist to some degree in everyday life. But rather than being threatening beings or flaunting their super-cool powers, these girls are just trying to get through life with their own particular weird circumstances.

Take Hikari, the group's cheery blonde vampire. You may catch her chewing on people and drinking blood, but rarely at the same time. Her blood intake, necessary for survival, comes from the government; and she just likes to nom on people when her fangs are bugging her. Which isn't to say she doesn't occasionally fantasize about biting a neck... she just, you know, chooses not to.

Also, she wasn't "turned"—like other demi-humans, she was just born that way. Even wilder, she's got a completely human twin sister. Ain't genetics wild? 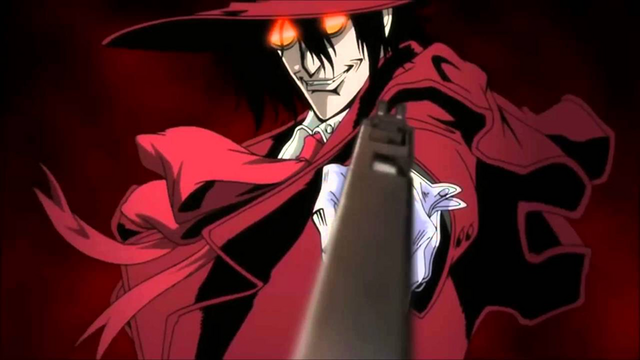 Who's got a cool red coat and round shades, is awesome with a gun, and isn't Vash the Stampede?

Alucard, the star of Kouta Hirano's manga-turned-anime Hellsing, is one of many vampires turned vampire hunter. This particular bruiser serves the Hellsing Organization, mopping up supernatural beings around England. He's also got an assistant in policewoman and newbie vampire Seras Victoria, though the pair have very different feelings on what their existence as vampires means.

When it comes to motivation, Alucard likes a good fight, but he's also looking to die—specifically at the hands of a human. After all, he's been around a really long time. You might be able to guess how long based on his super cryptic pseudonym. 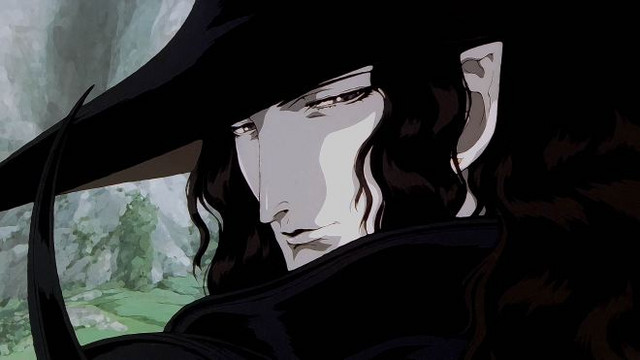 If you're in the mood for more hunters, look no further than the star of Vampire Hunter D. Technically he's a dhampir—a half-vampire, half-human—but considering how cool he is, we're classifying him by his dad's side.

As OP as he is, we do like him. He's got unearthly beauty (thanks in part to being designed by Yoshitaka Amano), he's got most of the perks of both sides of his lineage with fewer of the drawbacks, and he's got a symbiote in his left hand that sounds like Mike McShane from Whose Line Is It, Anyway? Oh, and a cyborg horse. He absolutely has a cyborg horse.

While there are lots of Vampire Hunter D books, he's only made it to screen twice so far. The more recent film of the two, Bloodlust, pits D against the legendary vampire queen Carmilla. It also reveals that vampires live in spaceship-castles, which is admittedly pretty cool. 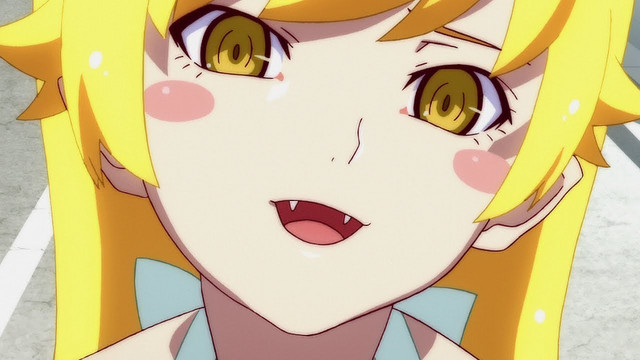 Also known as Kiss-Shot Acerola-Orion Heart-Under-Blade, Shinobu may look cute, but she's definitely a force to be reckoned with. The 598-year-old vampire has a wild history that involves witch's curses and mass suicide, and she could probably kill you at full power. Fortunately, you're probably safe if you come bearing a box of donuts.

Also fortunately, she's not nearly at the same level of power as she once was. A fully powered-up Kiss-Shot not only looks and sounds older, but also has the capacity to be a lot scarier. It seems losing most of her power gave her something to think about, though, so the Shinobu we know acts as cute as she looks. You don't want to find yourself on the receiving end of her Vampire Punch, though. Ka ka! 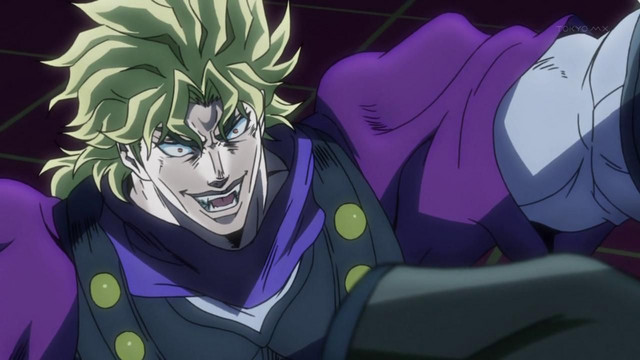 Has your life ever gotten so messed up that you finally just stab your own brain with a magic stone mask and become a vampire? That was where things really kicked off for DIO, once Dio Brando of the early days of JoJo's Bizarre Adventure. Once the son of a drunkard who was accepted into the Joestar family via a major misunderstanding, he's now made trouble for the JoJo line for quite a while now.

Not only that, he's intruded on the JoJo line himself, fathering Golden Wind protagonist Giorno Giovanna with Jonathan Joestar's stolen body. We're still not entirely sure what that means for GioGio's genetics, but it does explain his fabulous blond hair once he gets his Stand.

Despite the title of the series literally referencing the JoJos, it's safe to say DIO is one of the biggest stars of the show—he's got plenty of memes to prove it.

Now it's your turn! Which anime vampires are you appreciating today? Let us know in the comments!