The Greatest Scientific Analysis of Anime High Fives Ever Created

It's time to figure out what makes a good high five 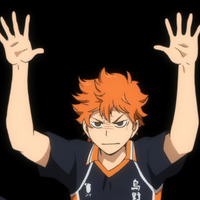 The high five. An iconic gesture that has grown in popularity over the past century to become something that is ingrained in us. Whether it’s being used to celebrate an accomplishment, greet someone, a replacement for a handshake, or just to slap someone’s hands, high fives aren’t going away anytime soon. The high five came of the “low-five” which has been dated back to the 1920s African-American culture, and then was popularized in the late 1970s in both pro baseball and college basketball.

Now, it’s time to celebrate National High Five Day by looking at how it’s been utilized in anime. Which means, we’ve gone deep into the labs to give you the most analytical and scientific look at anime high fives ever conducted. After many exhaustive hours researching and studying high fives, we’ve come up with a criteria on how to rate them. Unfortunately, our grant money only allowed us to look at six high fives, so we will be missing out on some other ones that have occurred. 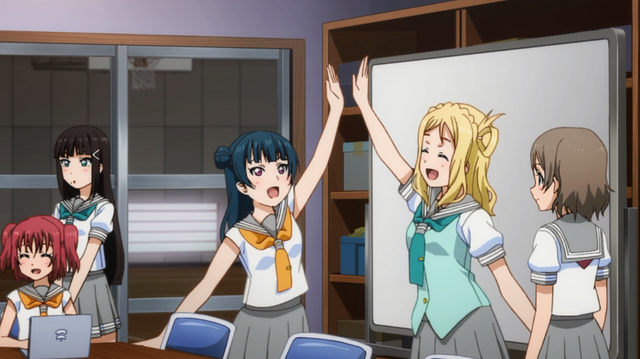 So, how do we determine a good high five? Well we’re gonna look at six points of emphasis: technique, oomph factor, strength, degree of difficulty, contact, and a flare for the dramatic. With these in mind, we will be able to figure out which is the best high five(s) out of our sample size from a score of one to five. With that in mind, let’s dive into some good high fives.

Three high fives for the price of one. A regular high five on its own can sometimes be hard to pull off as you might miss or not make good contact with the recipient. Pulling off good back-to-back-to-back high fives in the middle of a dance routine is very difficult. The first years of Ruby, Hanamaru, and Yoshiko Yohane are able to make solid contact as they pass by the third years of Dia, Mari, and Kanan while performing Aqours’ song for the Love Live finals, “Water Blue New World”. Each high five we see has good technique to allow for the kind of contact you want from a high five. The elbow bend is a key factor as it can give you that extra “pop” you need. Maintaining all of that while also on the move makes it harder to pull that off, which all three high fives maintain. On top of that, Ruby is able to give the camera a little salute after her high five which adds a nice touch to accentuate her high five. All three of these high fives would be very good on their own, but doing it in the middle of the dance gives it the bump it needs to be excellent. Five high fives out of five.

If you’ve ever seen or participated in any sports, you’ve witnessed high fives. They’re a staple to show support to your teammates or to celebrate. Naturally, you’re going to see them come up in sports anime as well. Here, we see Kageyama give Hinata a high five during a match, and it’s a bit rough. Kageyama’s form is sloppy and wild. There’s no bend to his arms, he’s just whipping his arms at full force toward Hinata. It’s a surprise that he’s able to make contact with Hinata’s hands, which is what saves this high five from being a disaster. There’s certainly a lot of strength and “oomph” to his high five, but Kageyama really needs to work on his technique if he wants to not injure who he’s high fiving and to be considered good at the craft. Two high fives out of five. 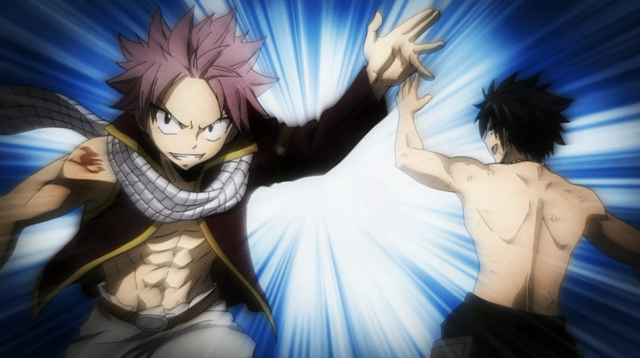 Now, you may be wondering, this picture isn’t moving like the rest of them, what gives?! You’re right! The episodes this comes from deprives us from seeing the actual act and instead gives us a still image with sound. Thankfully, our grant money was just enough that if this had been animated, we’d gone over and not been able to rank it, but let’s try to figure out if it’s good just on this context alone. In terms of technique, this looks to have been a good high five. There’s some good arm bend in their throws, along with what looks to have been good contact as they passed each other. The sound the anime uses makes it imply it was strong, too. Although a lot of what we’re saying makes it seem fantastic, we’re doing a lot of assuming. Maybe in motion the high five wasn’t as smooth. It had good sound, and that’s it. Sometimes images can look better than what was actually happening in motion. As much as I’d like to give this a good grade, as an accomplished high five scientist, there’s too much that’s unknown to do so. Three high fives out of five.

The high five is a common way to greet friends as Usagi is demonstrating here. Any high five that creates a happy faced star has to be good right? Usagi’s technique is a little rough. She has good motion and creates solid contact with Naru, however if she bent her arm instead of swinging it around, she’d be able to create more of a snap to her high five. However, check out her left leg as she goes through with the high five. She pushes off it to create more momentum from her standing position to compensate for the lack of arm bend. Plus, Usagi is able to do this while Naru is walking towards her and is essentially a moving target. All of that combines to add more strength to the high five and give it more “oomph” while adding in that pizazz by executing it on one foot and making a nice star. While she could improve her arm technique along the way, Usagi is well on her way to becoming an expert at performing stylish high fives. Four high fives out of five.

This is a disappointing high five, for a number of reasons. A big reason for this is that imagine if this was Takeo giving a high five. That beefy boy would be a master as being able to utilize technique, contact, strength, and “oomph”. Yet, he’s the recipient here for Suna’s high five which is lackadaisical at best. He actually has decent technique here, but you’re not going to get much pop when you’re sitting down. There’s good contact, but it would be very hard to miss Takeo’s big hands here. It also doesn’t help that there’s no style to this high five. It’s very plain. The effect when they high five lures you into a false sense that this is a good high five, but nothing about this adds up to being what you’d want to model your technique after. Suna’s low energy effort fits him, but it leads to a disappointing high five. One high five out of five.

Giving yourself a “self high five” is absolutely a thing, but Naruto takes it to the next level here. As we’ve been going through our Great Crunchyroll Naruto Rewatch here, we’re nowhere close to Shippuden, so maybe in 2021 I’ll understand the context of this episode, but let’s breakdown Naruto’s clone high fives. This is definitely a series of high fives that are putting all their effort into style. These clones have practiced and done this countless times to pull this off and make it look good. The high fives on their own are pretty average. The second one is the best one out of the three as there’s a good amount of windup in it compared to the other two. They are done with good technique though which helps even it out. While there isn’t much pop or strength behind the three, it’s really the flare at the end that helps carry these high fives into being a new version of a self high five. Four high fives out of five.

There are many high fives in the wide world of anime that have yet to be studied in this manner and maybe when more grant money clears, we will be able to give them a proper analysis. If you’d like to fact check our findings or grade other anime high fives, please do so in the comments down below. Allow 52-56 weeks for your junior scientist badge to arrive in the mail. As for me, I’ve got to put the lab coat back on and get back to the anime science labs and continue researching.

Do you love writing? Do you love anime? If you have an idea for a features story, pitch it to Crunchyroll Features!
Tags
love live sunshine, haikyu, fairy tail, sailor moon, my love story, naruto shippuden, national high five day
« Previous Post
JUMP FORCE Reveals My Hero Academia's Bakugo and More as DLC
Next Post »
Sympathy for the Devil: Eight Years of Blue Exorcist!
Other Top News
3 Comments
Sort by: