Puyo Puyo Champions comes out swinging, but does it take home the gold? 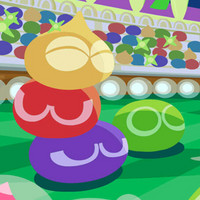 Puyo Puyo is perhaps one of the longest running puzzle franchises aside from Tetris, but it has never had an easy path to popularity and success outside of Japan. One of the first iterations of the game got renamed to Doctor Robotnik’s Mean Bean Machine, and releases of the series have been somewhat sporadic ever since, finding its home with maniac puzzle game fans who enjoyed a challenge and battling with their friends. 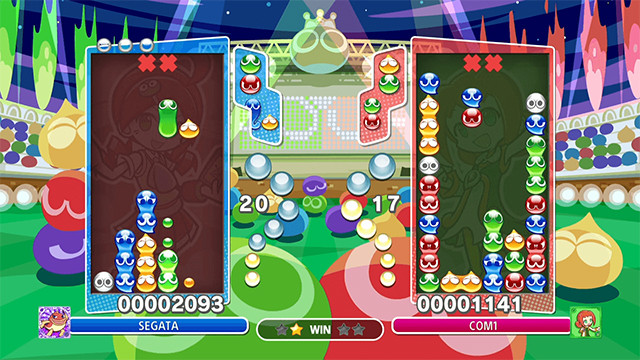 In 2014, Puyo Puyo Tetris really helped explode the popularity of the series by bringing together the two storied puzzle franchises for the first time in a battle oriented mash-up, with players switching between their preferred style (or being forced to play both at certain intervals) and gained popularity for the quick, colorful puzzle combat that ensued. This year, Sega has released Puyo Puyo Champions, a purely Puyo Puyo based game that still leans heavily into the multiplayer puzzle battle aspects; but how does it stack up on its own, and should you get it? Well, that might be complicated, but first let’s talk a little about what Puyo Puyo Champions has to offer. 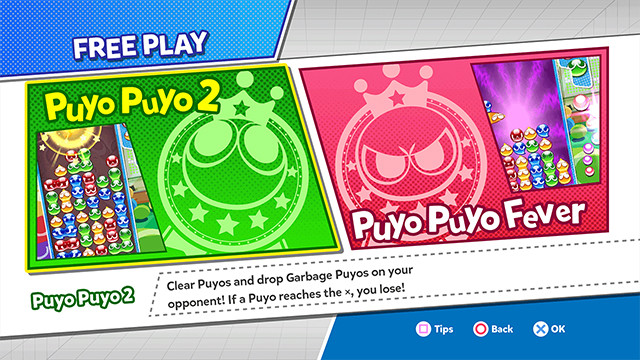 First, the Puyo Puyo Champions package is pretty barebones when you really break it down, giving you access to either Puyo Puyo 2 based rules, or the newer Puyo Puyo Fever version of the game. There’s no story mode like in previous Puyo Puyo titles (which, I’ll admit, kind of bummed me out), with each version of the game offering you either an endless battle rush to see how many CPU opponents you can beat, or letting you choose your opponents—with up to three players in Puyo Puyo 2, and four in Puyo Puyo Fever— for one-off battles. There are multiplayer modes for each as well that focus on couch play combat, and that’s about it for the offline modes of play. Online modes offer you the ability to play in ranked or unranked combat using either rule set, allowing you to pick your character of choice from the roster of returning Puyo Puyo staples, and finally there are some record keeping options, and the replay channel. 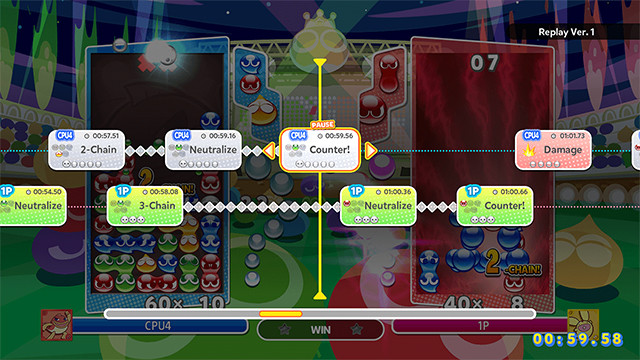 The replay channel is an interesting feature, allowing you to keep replays of your best (or worst!) moments for further study, but it also lets you publish these clips for others to watch, and gives you the ability to watch matches that other players found to be exciting or marvelous to watch. As I was testing it, I personally got to watch a galaxy brain level combat between two Carbunkle players, and aside from my ears going numb at 2 Carbunkle’s screaming “Guu guu guu!” at one another, it was fun to be able to easily watch what other players had done, including the ability to fast forward, pause, and rewind the replay as I watched it. There are a few other options available, such as an 8 player offline tournament option, which makes this a perfect game to run Puyo Puyo tournaments with, and a training mode that can give you some annotations for improving your game. 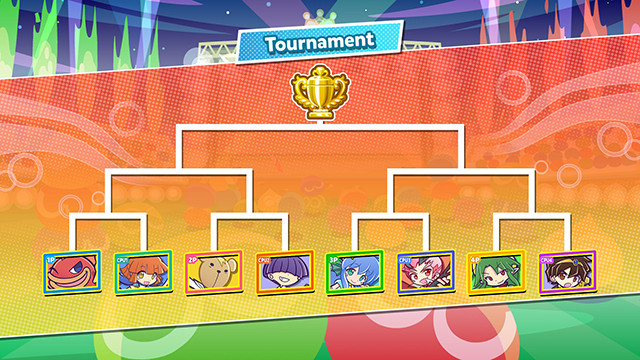 Aside from all of this, however, there isn’t really a lot here, and depending on how you feel about that, this may or may not be the game for you. There are some fun customization options for your avatar choices and display colors in Multiplayer, and you can also change the audio from English to Japanese, if you prefer the original voice acting. At the price point of $10, you’re getting quite a lot of bang for your buck, so it's an easy recommend from me if you’re already a huge combat puzzle game fan, especially a fan of Puyo Puyo itself, and you’re looking for new people to test your skills against. However, if you prefer slower, more methodical puzzle games, or don’t enjoy the puzzle battle genre like Super Puzzle Fighter II Turbo, Tetris 99, Puzzle League, and Puyo Puyo, I’ll say that there’s really nothing here that’s likely to change your mind in that regard. But if you’re fairly new to puzzle games, or puzzle combat games, is this the right fit for you? Well, I feel it can be, with a little help in learning the ways that Puyo Puyo operates. With all of that said, let’s start a little Puyo Puyo Primer courtesy of Professor Nicole! 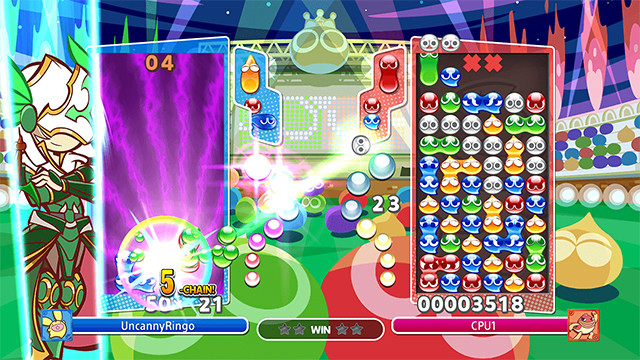 If you’ve ever played Tetris in any form, you’ll find some similar elements in Puyo Puyo. Your abilities extend to dropping and rotating pieces, aligning them to your particular desires and shapes. The similarities end there, however, as Tetris focuses on shifting shapes, and Puyo Puyo instead works on building sets of 4 matching Puyos to clear them from the board. The real meat and depth of Puyo Puyo comes from the ability to arrange the Puyos in such a way that clearing them starts a chain reaction, creating bigger and bigger combos as the board clears out. Puyos can be arranged to clear in horizontal, vertical, L-shapes, and 2x2 squares; as long as 4 similarly colored Puyos touch, they’ll clear themselves from the board.

With clever planning, you can make these chains bigger, linking together larger networks of Puyos of a single color, but that strategy is perhaps not as good as it sounds! Puyo Puyo is a game that revolves around combos, not volume; starting a chain reaction of 3 or 4 combos is far better than linking together a big network of singularly colored Puyos before clearing them. This is another aspect that makes Puyo Puyo unique from other puzzle games, like Dr. Mario or Super Puzzle Fighter II Turbo; where in those clearing huge amounts of the same color can be similarly beneficial to large chain combos, Puyo Puyo really wants you to focus on clearing things in a combo-focused manner. 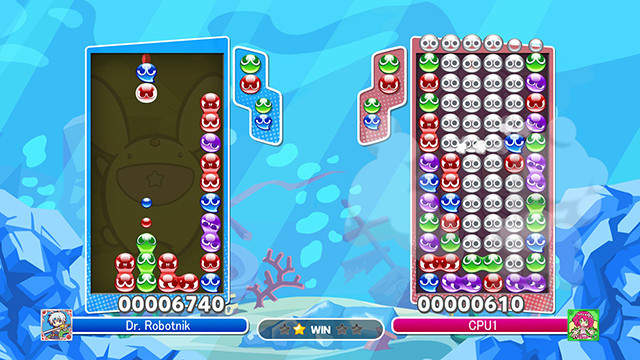 In that regard, Puyo Puyo is an easy to learn, but difficult to master game. Since your opponent (either AI or human) are also playing at the same time as you, they may occasionally send garbage to your side of the field, messing up your combos… Or, maybe they’ll accidentally help you! See, since garbage Puyos have no color and take up space, they can sometimes offer interesting ways to build your board in order to clear a combo you didn’t have access to before. One of the great things about Puyo Puyo is that you can always potentially come back from defeat if you play smart and plan your moves, and huge comebacks are always exciting and possible!

One of the difficult things to manage in a puzzle battle game is that ability to recover from enemy attacks; one of my older frustrations with games like Super Puzzle Fighter II Turbo or Tetris 99 is that there are just situations in which, except for extreme, exacting play, you’re just done. In Puyo Puyo, while enemy attacks can be extreme, the game allows for some interesting recovery to take place if you’re savvy. In Puyo Puyo Fever mode, for example, matching the tempo of your enemy’s attacks can actually help you out, even if you’re only clearing small patches of Puyos at a time. Matching and countering the rythm of your opponent builds the Fever gauge, unique to that mode, which when filled sends you to a series of pre-made combo boards; clear those, and you’ll score a huge attack advantage against your opponent once Fever Mode ends! 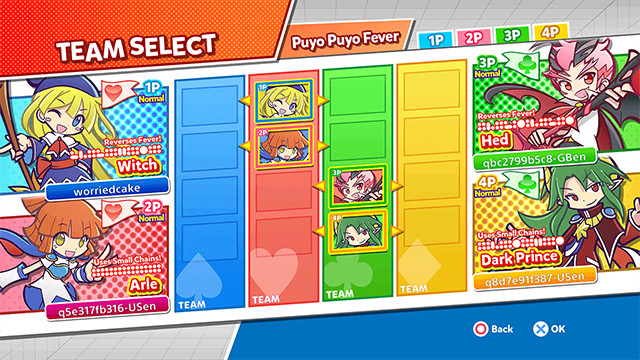 The differences between the two modes boil down to a few distinct things: Fever mode, and various Puyo drop shapes. Other than that, the games have exactly the same rules, so it really just comes down to whether you like the “classic” appeal of Puyo Puyo 2, or the newer, tempo-based gameplay of Puyo Puyo Fever. Either way you’ll have a great time with it! That said, the game itself doesn’t have much in the way of a tutorial or training mode, but once you play a few matches against the AI, you’ll likely pick up the game quite quickly, and that will allow you to get into the real meat of this game: multiplayer battles.

Battle is easy; if you’re doing offline, just head into the Multiplayer menu. If you’re instead ready for some online play, then you can do that just as easily. I’m happy to say that, in my testing of the Switch version, I was able to pretty easily find a match and play against opponents with no connection issues or downtime while playing, meaning you can enjoy some pretty great Puyo battles on strong WiFi connections, not even considering wired connections on other systems like PS4 or PC. The nice part about online Puyo Puyo Champions is that you can select opponents based on certain criteria, such as level of skill, types of game you want to play, and other selections. I didn’t mess with these too much, but I appreciated their availability, and I think it makes the game quite accessible to players of all skill levels. 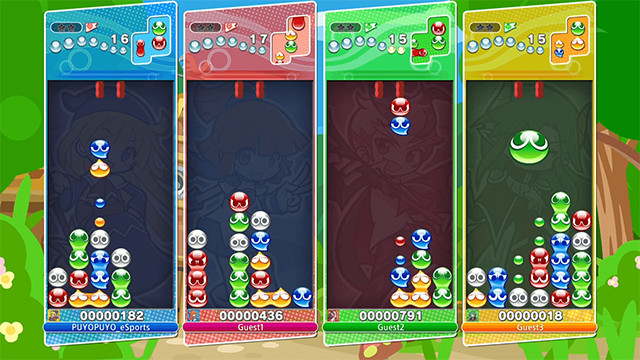 If you’re interested in one of the premiere battle puzzle games, then I can’t recommend getting Puyo Puyo Champions enough. Fans of Puyo Puyo Tetris will find a lot to love here, although the very unique mix-up is gone, and new players or those curious about what Puyo Puyo is all about will really find a lot of bang for their buck in the multiplayer and endless battle modes against AI opponents, who really hold nothing back! If you’ve ever considered dipping your toe into this kind of game, I think you’ll find a lot to love here, and with some playtime under your belt, you’ll soon learn why Puyo Puyo has such a diehard fan base after all these years. Good luck arranging all those Puyos, and go for the best combos! It’s great to see the Puyo Puyo community growing after the success of Puyo Puyo Tetris, so hop on board and find out what all the fuss is about! You won’t regret it.

+ Great puzzle battle gameplay that will keep you coming back.

+/- Not a lot of things to do other than play Puyo Puyo, but at the price point it’s a great deal if puzzle battling interests you.

-  Turn your volume down on double Carbuncle fights. Please trust me on this one.

Are you a Puyo Puyo fan, or are you a newcomer looking to test it out? Let us know what you think of the game in the comments!

Tags
puyo puyo, puyo puyo champions, puzzles, games
« Previous Post
The Official Site For The Rising of the Shield Hero Is Now in English!
Next Post »
Wise Man’s Grandchild Follows in the Footsteps of a Certain Slime
Other Top News
2 Comments
Sort by: