It turns out that the NGE Angels taste pretty darn good 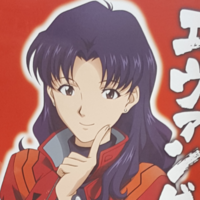 When you first arrive at Evangelion Sakaba (bar), you're greeted by a huge picture of Gendo Ikari looming over you from above the door. Stoic and composed, he was bestowing a simple but important mission on everyone who entered the establishment, telling them to “Drink.” Seeing as I am not Shinji, I decided not to argue with the man and did as I was told. 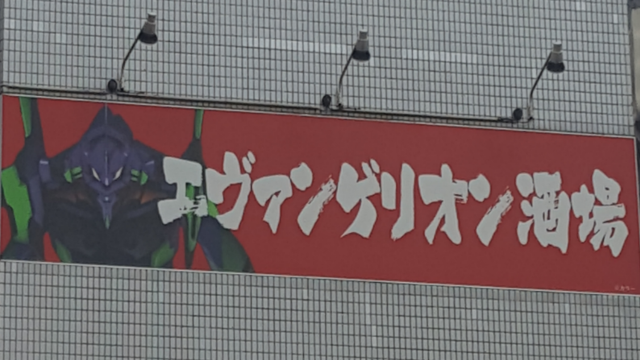 Evangelion Sakaba is located in Ikebukuro, Tokyo, and serves drinks and bar food based on the popular anime. It’s actually the second time that Neon Genesis Evangelion has been brought to life in edible form, and this one also has a time limit on it, with a planned End of Evangelion (Bar) date of September 1, 2019. 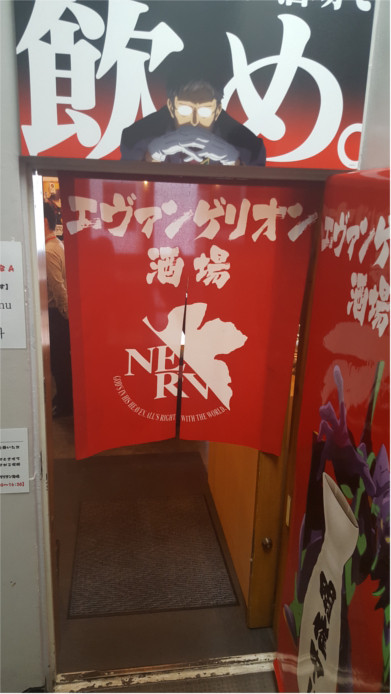 So if you’ve ever wanted to… drink Lilith’s blood or eat an Angel (which, let’s be honest, wouldn’t be that weird given the show’s subject matter), then you better hurry before it closes. But is the trip really worth it?

I definitely thought so. 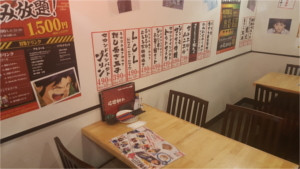 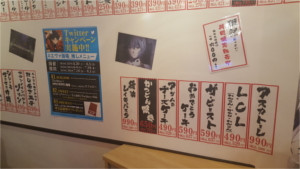 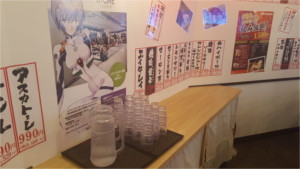 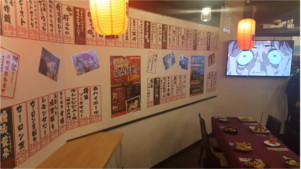 At first glance, Evangelion Sakaba looks like a typical Japanese pub, with its simple décor, slightly dimmed lighting, and all the menu items being plastered on the walls on vertical signs in classic izakaya fashion. But it’s not like the Evangelion parts of it are hidden away. No matter where you turn to, you will always have Shinji, Asuka, or Rei staring at you from the random posters decorating the bar, or from the screens playing selected scenes from the anime. And if that’s not enough for you, there is always the bar menu.

Evangelion Sakaba understands that it will take more than a few Evangelion pictures to bring in the fans, which is why they went all out on the food and drinks. Some items are beautifully creative in their simplicity, like the Second Impact Tomato Salad, served in a glass with a lit sparkler (a horrible cataclysm that wiped out 2 billion people has never seemed so festive.) Then there is the Grilled Chicken With the Spear of Longinus or the Itawasa (thinly cut slices of fish cake) in the shape of the Angel Sachiel. 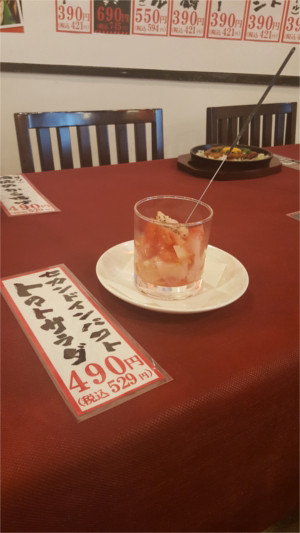 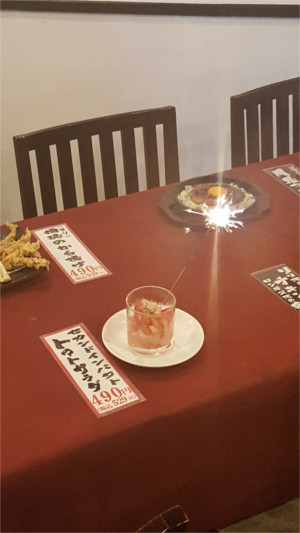 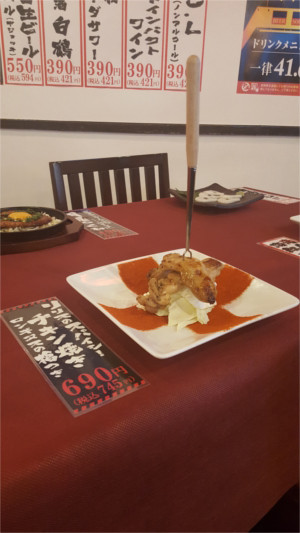 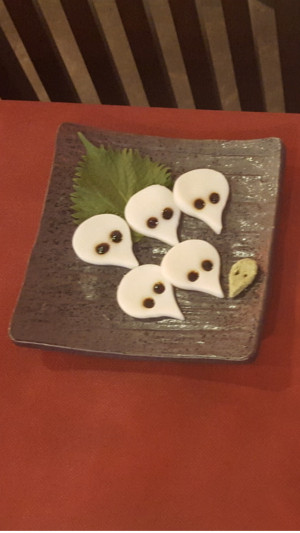 Sachiel is actually the one character you’ll see the most on the Evangelion Sakaba menu. He was the Angel with the Plague Doctor Mask face that could cause cross-shaped explosions and was almost torn apart by Shinji piloting the EVA-01. Well, you can similarly go to town on Sachiel’s likeness with such menu items like Sachiel Shumai Dumplings, Sachiel Meunière, or Chicken Wings Sachiel, which consists of two chicken wings and Sachiel’s face in the middle constructed out of a boiled egg. Sweet and a bit tangy, it was an incredibly fun treat that puts you in the mood to try out more of the menu. 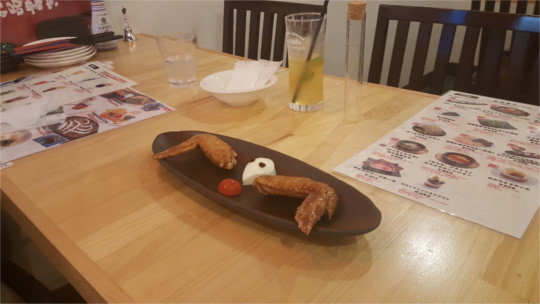 Other items were simply based on lines from the anime, like the “Position Target In The Center And Pull The Switch Tsukimi Tsukune,” a minced-chicken dish with an egg that kind of resembled a target being centered, or the “I Mustn’t Run Away Jjigae Stew,” which was named so because of how spicy it is. For something a bit lighter, you can always try the pickled eggplant and cucumber in the shape of the EVA-01, with eyes made from karashi mustard. 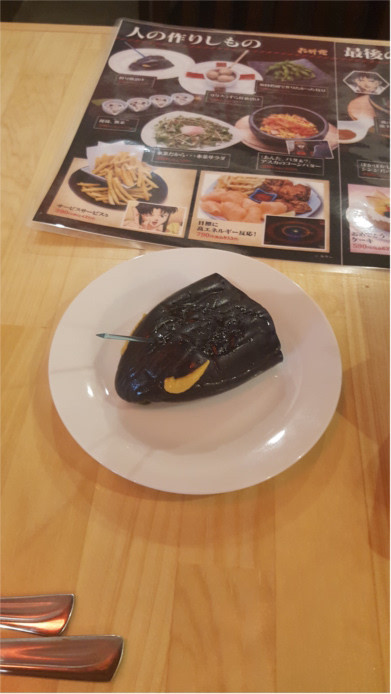 The best dishes, though, were the ones with pun names, especially the “Anta, Bataa?!” butter corn dish, which was a pun on Asuka’s famous line “Anta, Baka?!” ("What are you, stupid?") because “bataa” is “butter” in Japanese and it sounds close to “baka.” Don’t give me that look, no explained joke has ever made anyone laugh. At least not while they’re sober. Thankfully, Evangelion Sakaba can help you with that thanks to their selection of themed drinks.

I started out with the Mark.06 glass wine, named for the EVA unit introduced in Rebuild of Evangelion. It’s white wine dyed blue, and much like its namesake, it packs quite a punch. Even with a full stomach, this thing went straight to my head, which is kind of fitting if you know the unit’s entire story. 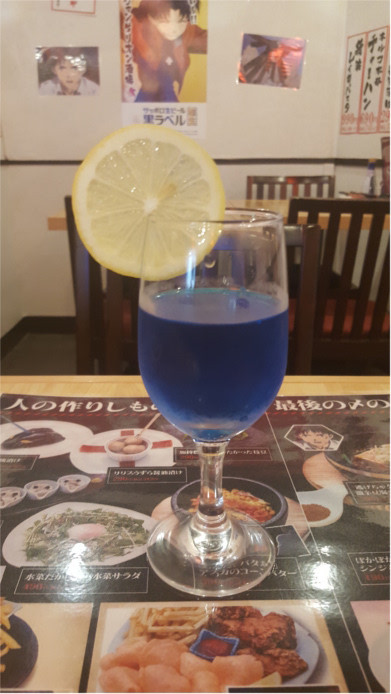 Another interesting parts of the alcoholic drink menu was the Asuka-themed Shikinami Tomato Sour because she’s a redhead and tomatoes are red so it makes total sense because you can’t make sours from, let’s say, cherries? Though I guess cherries are sweet which isn’t the first thing that comes to mind when you think of Asuka. The Rei-themed Ayanami Soda Sour similarly tried to capture the essence of the seemingly cold, emotionless character with a drink with an entire popsicle inside it, for which the bar should probably win some kind of award.

The non-alcoholic menu had some stand-outs as well, like the Kaworu Mojito but, to me, the highlight of the entire night was the LCL, which on the show is the blood of Lilith that allows pilots to sync up with their Eva units. It was one of the best things I ever tried. 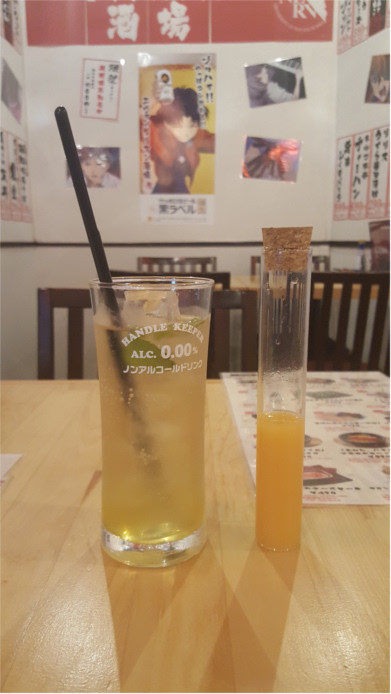 The drink comes in two parts: a glass of ginger ale mixed with pineapple and grapefruit juice, and a vial of orange and cranberry juice. You mix them together and the results are something else entirely. It first tastes a bit too sweet but before the sweetness can overwhelm you, you get hit with a sour wave that balances everything out and brings the entire thing home. If THIS is what all of humanity is going to turn to, then I’m switching over to the Angels’ side and helping them bring on the Third Impact because it is going to be delicious.

* ALL IMAGES ARE COPYRIGHTED. ALL RIGHTS ARE RESERVED.

Would you like to visit Evangelion Sakaba? If so, what’s the first thing you’d order there? Let us know in the comments!