Celebrating Pride Month with a list of great representations of gay and lesbian relationships in anime! 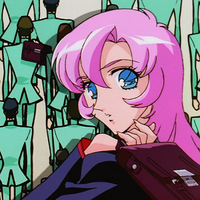 During the month of June, we celebrate LGBTQ+ pride. People of all identities and sexualities, whether they're loudly out of the closet, reservedly in, or anywhere in the middle, are encouraged to honor the struggles that have been made, rise above prejudice and social injustice, and be proud of who they are. Heroes like Marsha P. Johnson, Harvey Milk, and Laverne Cox have been and continue to be pillars of inspiration in the LGBTQ+ community, but there are plenty of fictional heroes in our favorite anime who continue to inspire us as well. 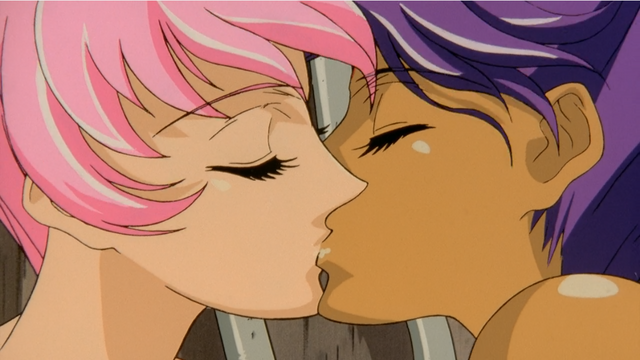 We’ve covered several iconic LGBTQ+ characters in the past, including thoughtful transgender representation in the form of Lily Hoshikawa from Zombie Land Saga and the cast of Hourou Musuko. Now, we’re shining a spotlight on canonical homosexual relationships in anime and how they signified progression in LGBTQ+ anime storylines. Here’s our list of some standout lesbian and gay couples in anime and what they do to present positive and healthy portrayals of homosexual romance. 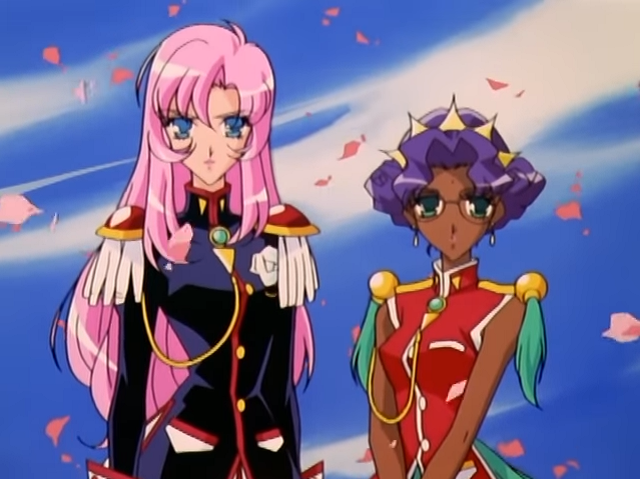 As Kunihiko Ikuhara’s flagship title after his time directing seasons of Sailor Moon, the award-winning Revolutionary Girl Utena is memorable for several reasons, one of which being the nuanced and mystifying lesbian relationship between the eponymous Utena Tenjou and the Rose Bride, Anthy Himemiya.

The budding romance that Utena and Anthy have certainly isn’t love at first sight. Utena stumbled into a betrothal with Anthy as per the rules of the Student Council, wherein she initially protected her honor as part of her ongoing life mission to become a chivalrous prince. Meanwhile, Anthy only acted on behalf of her conniving older brother and came off as cruel and merciless toward Utena throughout the series.

However, it’s through their developing feelings and eventual romance that their walls and patriarchal world views came crashing down. Through turmoil and sacrifice, the two of them learned how to trust and love one another. Though in the original anime their love is marked by a tragic and ambiguous end, their romance flourished openly in the movie, Adolescence of Utena, where they kiss on top of a moving motorcycle. It certainly doesn’t get more romantic than that. 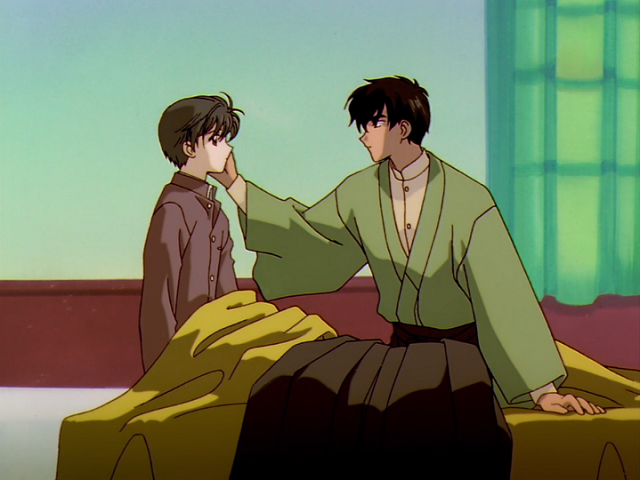 In a cast that’s remarkably diverse with its LGBTQ+ representation, Yukito and Toya are among one of the most wholesome gay anime relationships between two men.

Their romance was one of little spectacle, told through the lens of Yukito struggling to stay alive while hosting a magical being in his human body and Toya sensing that urgency. Though Toya tried to be forthright with his emotions, both with knowing Yukito’s secret and with his own romantic feelings for him, he was stopped at nearly every opportunity by antagonists out to make the main characters’ lives as difficult as possible. Luckily, all that emotional frustration paid off when their arc culminated in a heartwarming confession that saved Yukito’s life in the process. It was a love as passionate as it was magical.

A list that includes great lesbians in anime wouldn’t be complete without two of the coolest Sailor Soldiers ever. Haruka Tenoh and Michiru Kaioh made their mark in the 90s as prominent female characters in an intimate relationship with one another. Their depictions in both the original anime and Sailor Moon Crystal prominently displayed their feelings and leaves little to the imagination by way of their mutual affection. 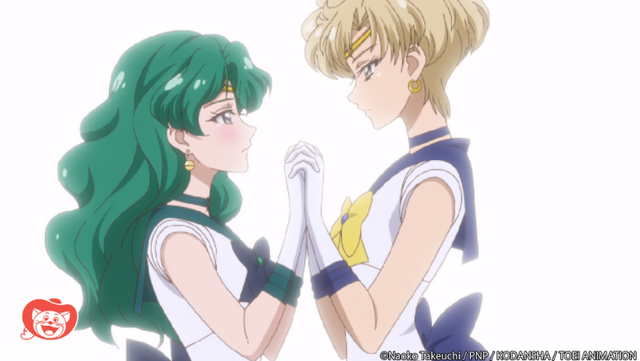 Fun fact: In 2007, HarukaXMichiru fanfics were ranked as the third most popular fan fiction search subject behind Backstreet Boys and Harry Potter.

In this 2011 series, two young boys grow up in a dystopian future while uncovering mysterious secrets in the “ideal city” of No. 6. Though the romantic implications between the protagonists of No. 6 was often more subtle than not, Shion’s and Nezumi’s relationship was not without its payoff.

Shion was the first person to treat Nezumi with kindness, despite having broken into his home in the first episode. What starts out as an unlikely friendship eventually develops into full-blown love as the series progresses. As the two become embroiled in government conspiracies, they become closer to each other.

The nature of their feelings couldn’t be easily defined at first. A kiss shared between them was written off as a friendly “good night” gesture. But all throughout the series, a natural intimacy would develop between Shion and Nezumi. This would eventually culminate in a climactic kiss that left no ambiguity over their relationship status. As a gay romance given its time to thrive throughout the course of a show, it’s a proper testament to how deftly homosexuality can be portrayed. 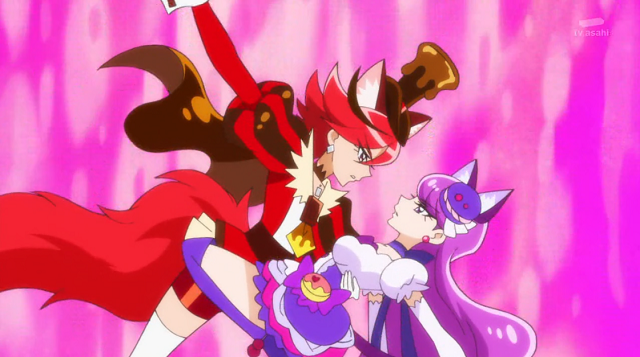 As a series marketed towards younger viewers, including a wholesome romance between two girls was certainly no small matter. Throughout the show, Yukari was unabashedly flirty with Akira, while Akira often contemplated her own feelings in response. Episode 25 brought their flirtation to a head when Akira confessed her love to Yukari in the midst of battle. The official soundtrack even contains a romantic duet between the two.

Macaron and Chocolat are rather groundbreaking representations of lesbian romance for their time. These two girls used PreCure’s notoriety as a platform to promote diversity and acceptance to its young audience. There’s nothing sweeter than that.

In four short vignettes, this 2016 film experty portrayed a budding romance between two adolescent classmates at an all-boys school. Over a year, Kusakabe and Sajou explored the many facets of first love through sudden kisses, late-night city excursions, and impromptu singing lessons.

Throughout a year, Kusakabe and Sajou experience a “what are we” phase, jealousy, and learned how to deal with long-distance relationships. Only occasionally does the movie delve into anything more mature than that. They also don’t experience any overt social backlash from their peers, who never ask any more than “so are you guys a thing?”

It’s this distinct lack of adult themes and controversy that is key in Doukyuusei’s storytelling. The courtship between two boys is told as a typical, interpersonal love story. Their relationship has its drama, of course. But thankfully, Kusakabe and Sajou are allowed to stretch out comfortably to fit in their relationship. They’re a perfect example of how homosexual love stories could and should be told, which is exactly like everyone else’s.

With a surprising number of wholesome lesbian relationships in magical girl shows, it sure is refreshing to have this couple in Sweet Blue Flowers live their love lives in a grounded drama.

Protagonists Akira Okudaira and Fumi Manjoume explore their individual sexualities in this coming-of-age story. While they were childhood friends who reunited during their high school years, their romantic endeavors took them to very different places. They didn’t initially end up together, finding romance with other girls. Through these journeys, each girl learned about being in a relationship and grew more emotionally mature as time went on.

Eventually, they find each other once more. After becoming a little more comfortable in their sexualities, the show ended on a positive note as they decided to try going out with each other. 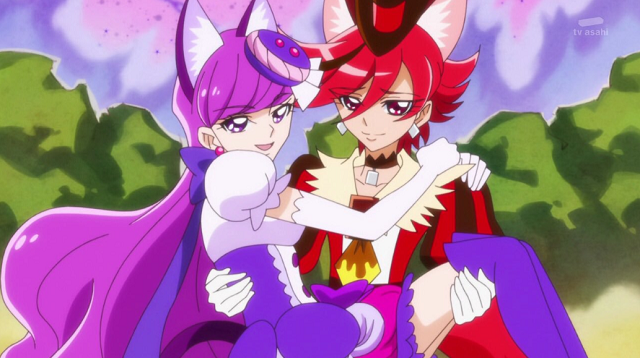 Lesbian and gay couples could always have a better spotlight in media. But their portrayals in these and several other shows and movies represent the strides that anime has made in wholesome and nuanced LGBTQ+ stories. And that’s something to be proud of, no matter what month it is.

Who is your favorite gay couple in anime? Who else would you include on our list? Comment and let us know!

How Utena Helped Me Understand My Queerness